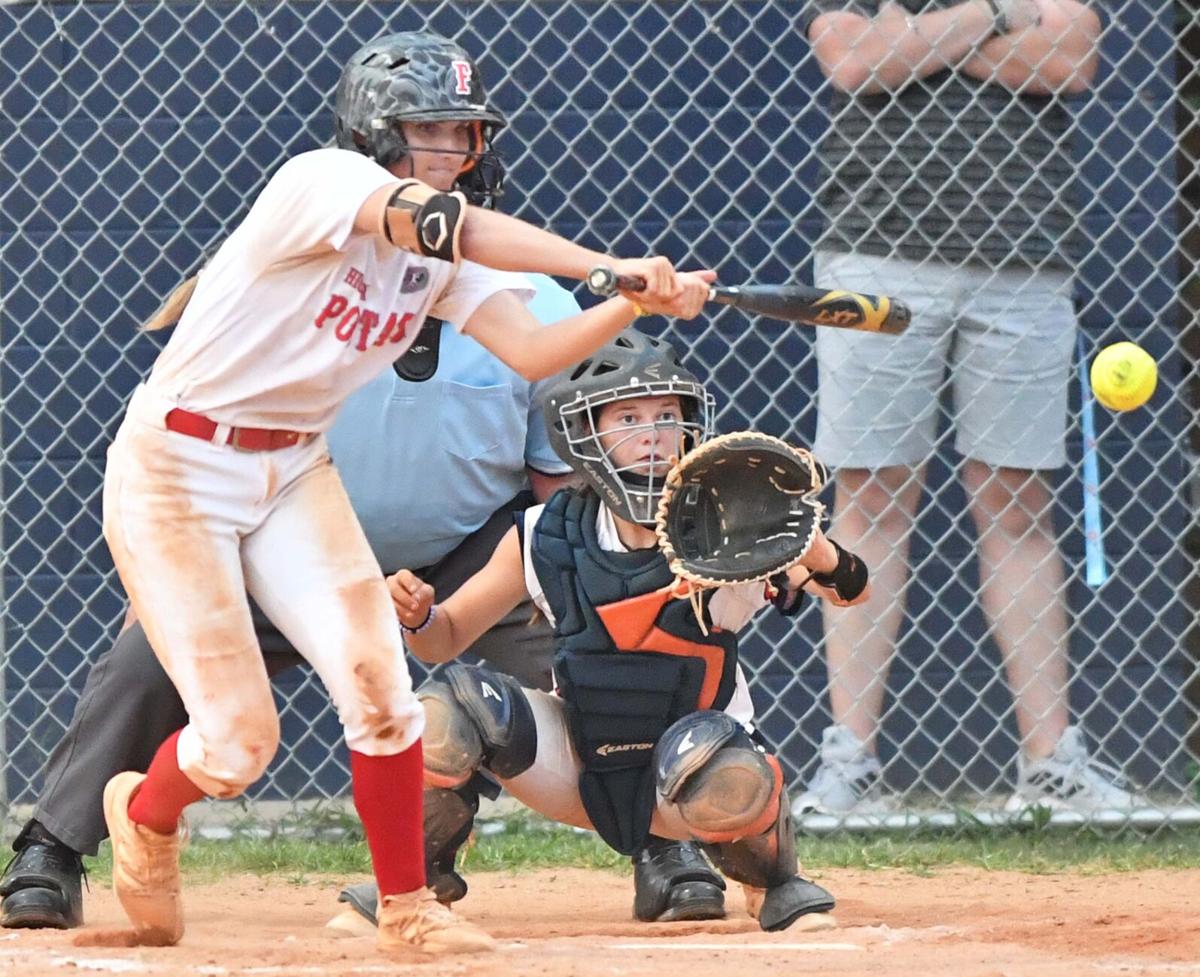 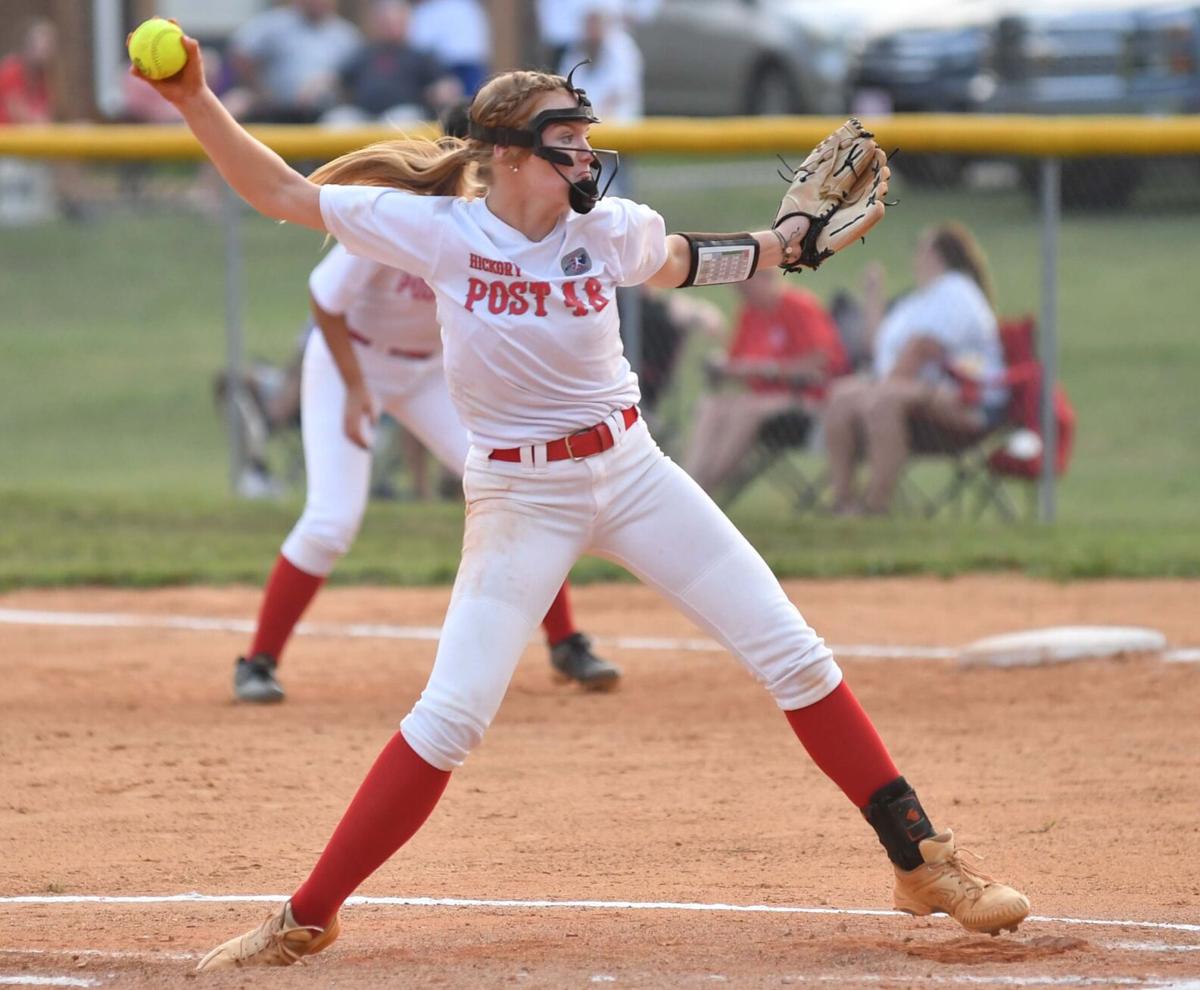 Hickory Post 48’s Owyen Lyall, 55, gets ready to deliver a pitch. Lyall allowed no runs on two hits with six strikeouts and one walk in a complete-game effort.

HENRIETTA — The Hickory Post 48 Senior Legion softball team recently seems to have hit its stride, closing the regular season on a winning note and continuing that strong play during the postseason. After shutting out Rutherford County Post 423 by a 6-0 final in the semifinals of the Area IV playoffs on Wednesday night at Chase High School, Post 48 now has a chance to advance to August’s state tournament with two more victories next week.

The No. 3 seed in the Eastern Division, Hickory improved to 15-7 entering next week’s best-of-three Area IV championship series against Wilkes County Post 31. The East’s top seed, Wilkes enters the title series with a record of 17-1 — Post 31’s lone defeat was a 10-6 road loss to Hickory in Game 2 of a June 1 doubleheader — and having won 16 consecutive games.

Game 1 of the best-of-three title series will be held at West Wilkes High on Monday at 7 p.m., while Game 2 will be played at Bandys High on Tuesday at the same time. Game 3 (if necessary) would take place at West Wilkes next Wednesday at 7 p.m. The winner of the Area IV championship series will join the Area I, II and III winners and host Shelby Post 82 in the state tournament Aug. 2-4 at Crest High.

“They’re in our conference, they’re tough,” said Post 48 coach Todd Smith of Wilkes. “They’ve got good pitching, we’re pretty comparable with them. We’ve had good ball with them all year, so should be some good games there.”

As for Wednesday’s contest, it began with Hickory’s Addie Wray launching the first pitch of the opening inning over the left fielder’s head for a triple. Following a strikeout, Wray crossed the plate on an RBI groundout from Grace Loftin.

Post 48 added two more runs in the top of the third after Wray again led off with a hit, this time a bunt single. Avery Alexander followed with a single to left, then Loftin lifted a fly ball to right that advanced Wray to third. Wray later scored on a throwing error, while Alexander came home on a two-out single from Macey Pennell.

Hickory doubled its advantage in the fourth, recording three hits in the frame. Kayla Hollar smacked a single to right on the first pitch of the inning before Mayson Lail sacrificed her to second and Jada Spake plated her with a double into the left-field gap. Wray followed with an RBI single, while a throwing error — Post 31’s third error of the inning and fifth on the night — later allowed her to cross the plate.

“Getting that first run’s big, gave us some momentum, and then we took advantage of the miscues they had,” said Smith. “We did a good job up there executing on our bunts, moving our runners, getting those timely hits once they made those miscues.”

Post 48 had eight hits in support of pitcher Owyen Lyall, who allowed two hits in a complete-game performance. A rising sophomore at Bandys High, Lyall struck out six and walked one, retiring the final 10 batters she faced including a three-pitch inning in the bottom of the sixth.

“Our pitching was big again tonight,” said Smith, whose team also received a complete-game effort from Lail in a 6-1 victory over Burke County Post 21 on Monday. “I just told the girls if we pitch like we’ve done the last two games, we’re gonna be tough to beat.

“Owyen did an excellent job tonight,” he added. “Kept them off-balance with the change, hitting her spots well, I just can’t say enough about her. I don’t think she threw but about 75 pitches the whole night and that says a lot.”

Wray had three of Hickory’s hits, while Alexander, Pennell, Hollar, Spake and Haven Helton notched one apiece. On the other side, Rutherford received an infield single from Baylee Short to lead off the first and a two-out single from Zaley Packett in the fourth for Post 423’s only two base knocks.

“Our defense was big again, backing up our pitcher,” said Smith. “I don’t like to see them walk anybody so make them earn it, and we’ve got the defense behind them to make them earn it because we don’t make many mistakes when they do put the ball in play.”

Taking the loss was Rutherford’s Christian Beaver, who struck out four, issued two walks and hit a batter while throwing all seven innings.

What was the craziest story in sports yesterday?

Will we see Max Scherzer traded?

Will we see Max Scherzer traded?

How may players on the Cubs will be traded before the deadline?

How may players on the Cubs will be traded before the deadline?

Simone Biles says she withdrew from final to protect team, self; plus more from Tokyo

Simone Biles says she withdrew from the Olympics gymnastics team final because she wasn't in the right headspace to compete. Here's the latest.

With Simone Biles out, Russians win gymnastics gold over US

The Russian Olympic Committee has won the gold medal in women’s gymnastics after U.S. star Simone Biles exited with a medical issue.

NASCAR's DiBenedetto to be at Hickory Motor Speedway tonight

For the first time since 2004, the U.S. men’s basketball team has lost in the Olympics, falling to France 83-76. Here's the latest from the Tokyo Games.

Hickory Post 48’s Owyen Lyall, 55, gets ready to deliver a pitch. Lyall allowed no runs on two hits with six strikeouts and one walk in a complete-game effort.