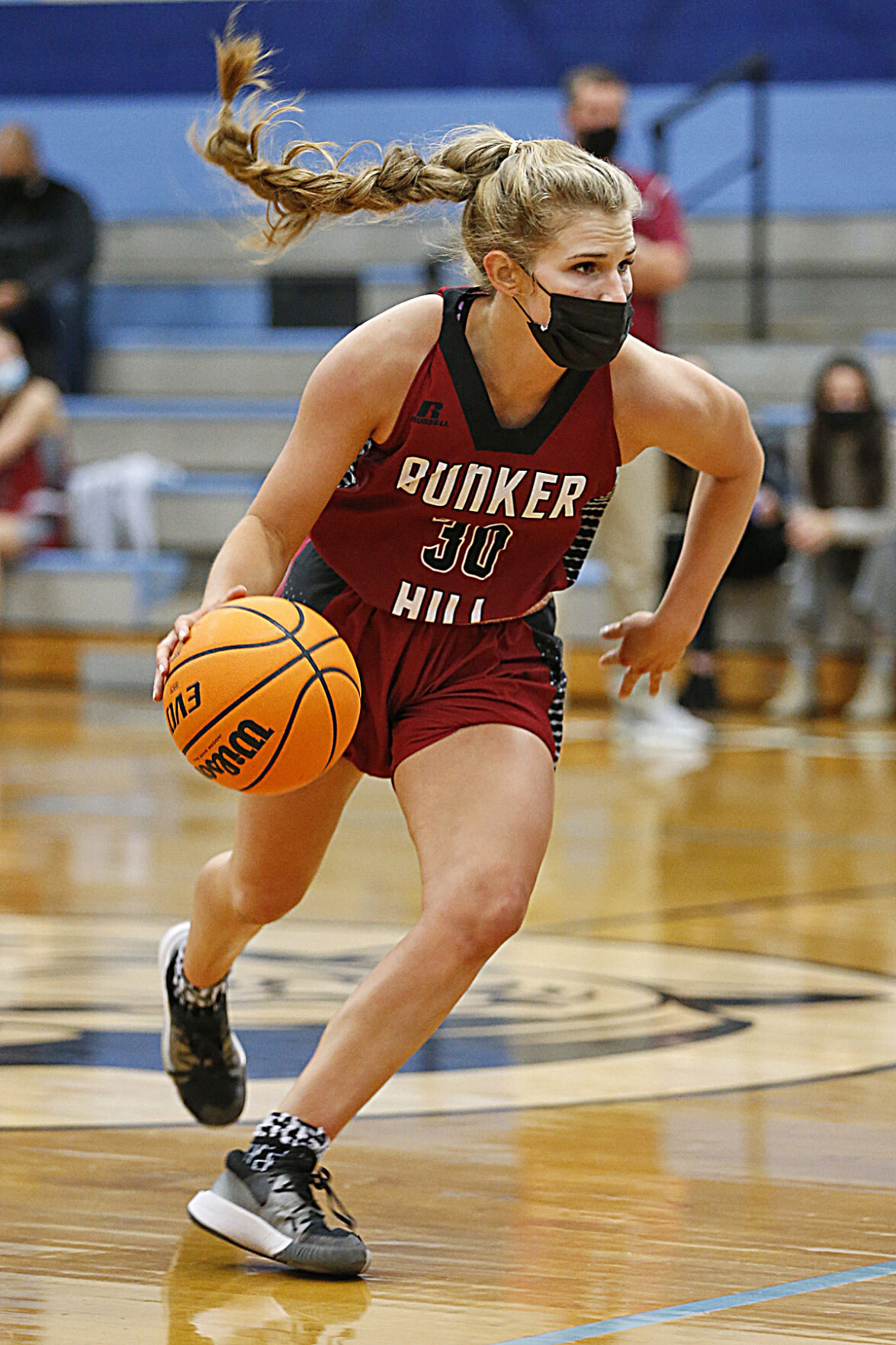 Bunker Hill’s Addison Wray looks for room to drive to the basket during this photo from the regular season. 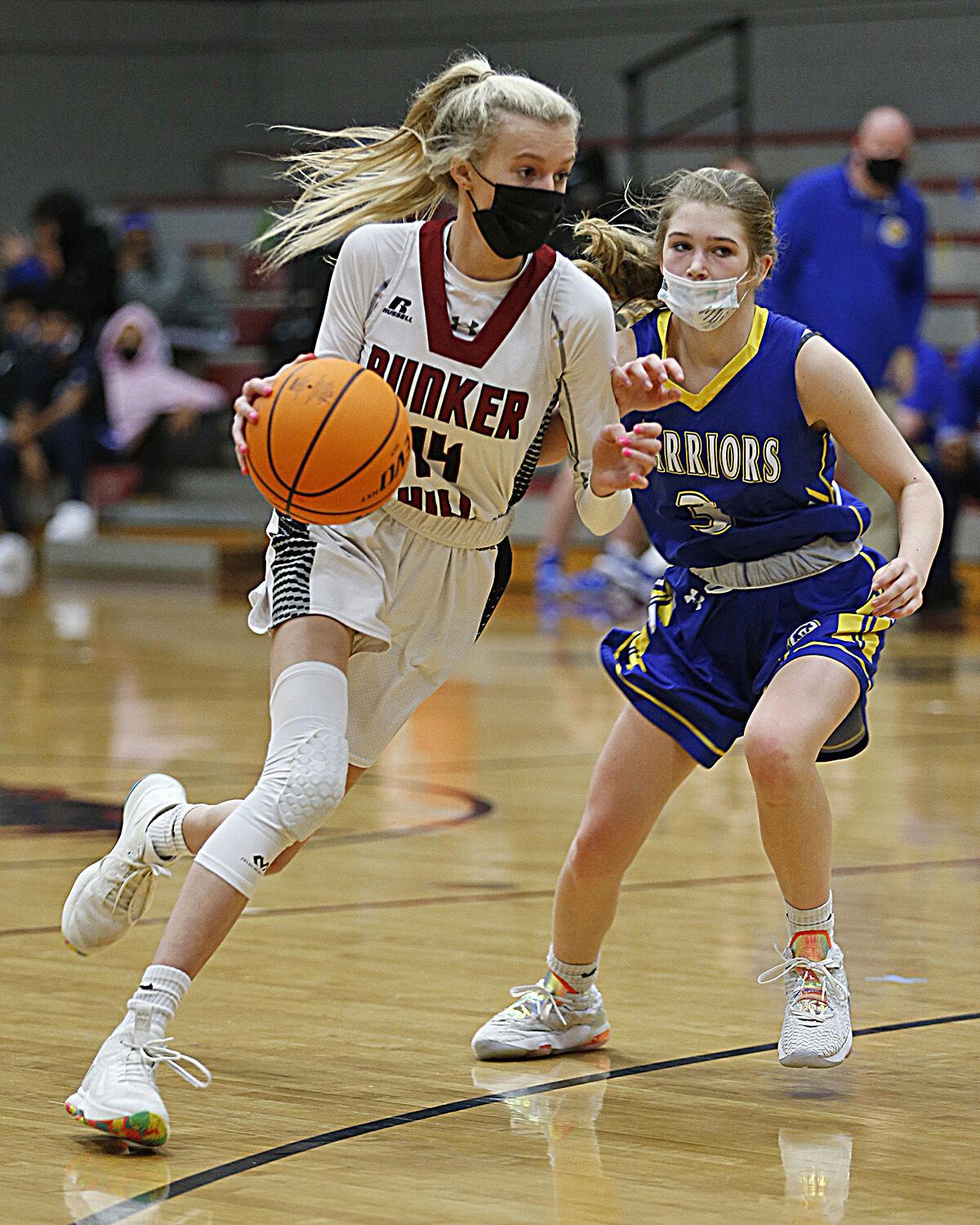 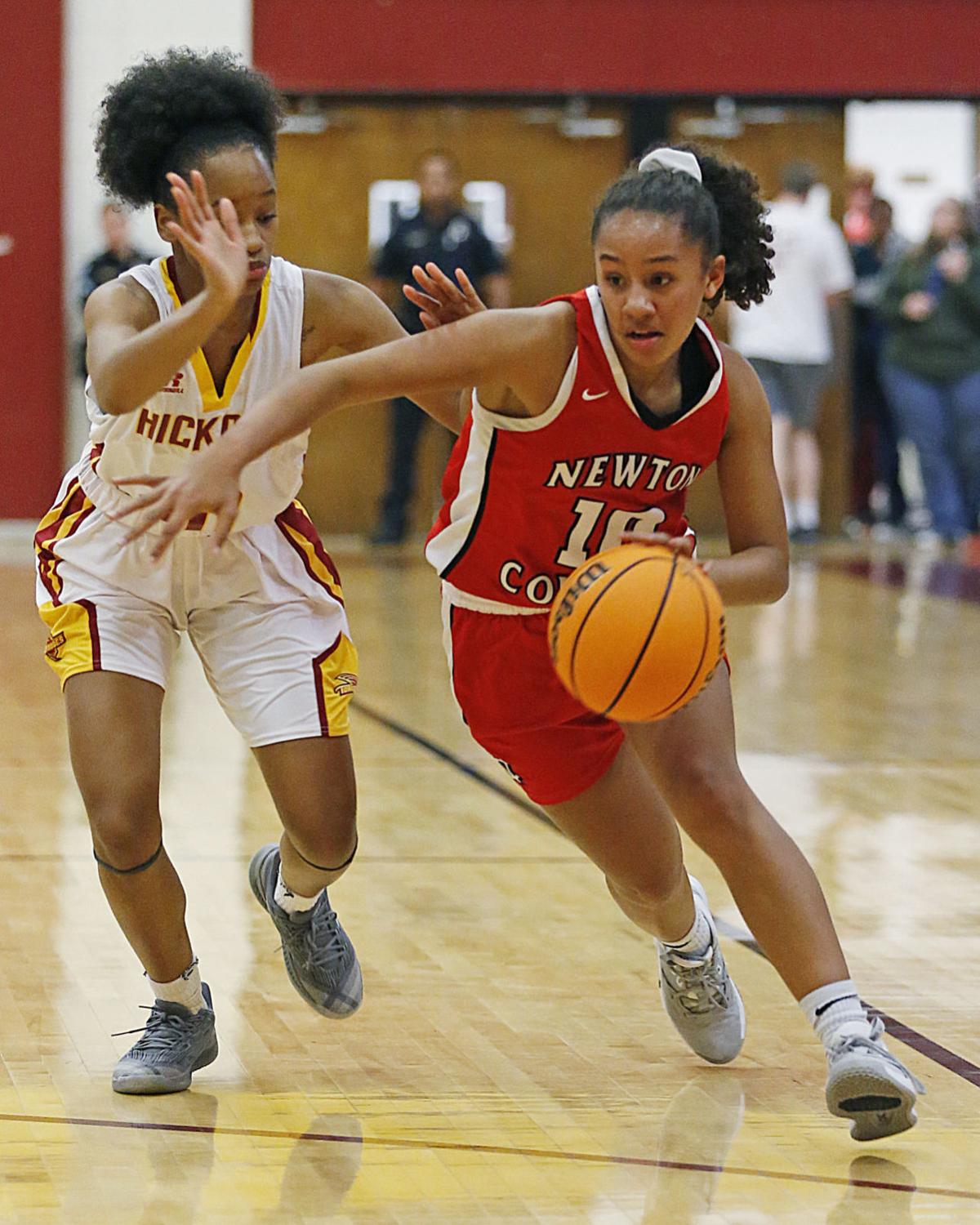 The North Carolina High School Athletic Association announced its brackets Sunday for the 2021 girls basketball tournament. Because of COVID-19, the number of playoff teams for this season was cut from 64 to 32. The number of teams from each conference for this year’s tournament was predetermined with a limited number of wildcard slots available to fill the 32-team bracket.

The first round is scheduled for Tuesday with the winners advancing to Thursday’s second round. Here are the capsules for the games involving schools from area conferences.

If the Red Devils are successful in defending their 2A state co-championship, much, if not all, of the work will be done on the road. Barring upsets elsewhere, Newton-Conover will not see a home game in the playoffs. Overall, they have won 35 in a row and finished off their third straight sweep of the South Fork 2A Conference. Newton-Conover is led by its own version of the “Big 3”. Sophomore point guard Cassidy Geddes leads the team in scoring (17.4 ppg) and assists (3.5 apg). Senior forward Grace Loftin averages a double-double with 15.6 points and 12.1 boards per game. She is also second in assists (3.3 apg). Junior center Emma Fox is at 13.1 points per game and has improved vastly around the post.

Pisgah won the Mountain Six 2A Conference regular season and conference tournament. After reaching the 2A state final in 2013 and the 3A West final the next year, the Black Bears have struggled in playoff competition with no wins since 2017. This will be the third year in a row the Black Bears will face a Catawba County team in the first round. Pisgah lost at Bunker Hill two years ago and at Bandys last year. Junior Cristina Garcia De Sivatte (11.9 ppg) and Dot Mills (10.5 ppg) are the lone players averaging double figures in scoring. Junior Alexis Gibson has 9.4 rebounds a game.

The Bears met little challenge in winning the Northwestern Foothills 2A Conference, as nine of the 10 wins came by double digits. Guard Addie Wray has led the Bears’ attack for four seasons, which was capped with game averages of 21.3 points and 3.5 assists in her senior year. But the Bears are more balanced this season. Olivia Ellis hit 44.7 percent of her three-point shots to average 15.1 points per game. Faith Isenhour blossomed into a steady all-around player, putting up 12.5 points, 8.2 rebounds and five assists per game. After going without a playoff win for 10 years, the Bears are looking for their third first-round win in a row. A win on Tuesday would put them into the “Sweet 16” for the first time since 2009.

North Davidson was the runner-up in Central Carolina 2A Conference, with the only loss coming to last year’s 2A West finalist Salisbury. The Black Knights are led by junior guard Emily Hege, who put up 24.1 points per game. Senior Courtney McMillan (15.0) and sophomore Lettie Michael (10.8) also averaged double figures in scoring. The Black Knights are looking for their first playoff wins since reaching the 4A Sectional final in 2009. They were eliminated in the first round each of the last two years.

The Mustangs lost their season finale to Newton-Conover and had to sweat out a possible tiebreaker scenario with Lake Norman Charter. However, the Knights loss at home to West Lincoln (5-9) put East Lincoln in as the South Fork’s second playoff berth. East Lincoln is making its second playoff appearance in a row after losing to Bunker Hill last season. The Mustangs are looking for their first state playoff win since 2010. Junior Taliyah Thomas leads the team in scoring (14.4 ppg) and 6-0 sophomore center Madison Self averages11 boards per game.

A young Shelby team nearly took out eventual state co-champions Newton-Conover in the third round last year. The Golden Lions led 10-0 and held a slim lead late in the fourth quarter before the Red Devils rallied. The only two losses for Shelby – winners of the Southwestern Athletic 2A Conference – in the last two seasons have come against the Red Devils and via a forfeit in 2020. Sophomores Maraja Pass and Ally Hollifield each average over 20 points a game.

With COVID-19 hampering the schedule, the Panthers played a round-robin tournament with Fred T. Foard and Draughn to determine the Northwestern Foothills 2A Conference’s second state playoff berth. Patton defeated Draughn but lost to the Tigers, who lost to Draughn to force a draw. The Panthers got the proverbial long straw and will play on Tuesday. This is the fourth straight playoff and the eighth overall for the Panthers, who have just two postseason wins in the program’s history. One of them came last year at R-S Central. Senior guard Reece Fisher leads the team with 17 points per game.

Last March, a young Salisbury team lost to Newton-Conover in what became a de-facto co-champion game, when the initial reaction to the COVID-19 outbreak canceled the state final. This year, the Hornets are back with many of the same players, who led the team to a Central Carolina 2A Conference title. Sophomore Kyla Bryant led the team in scoring for the second straight year, putting up 15.9 per game.

Freedom lost major contributors from last year’s team that went to the 3A West Regional and went through two COVID-19 quarantines this season. Still, the Patriots went undefeated in the Northwestern 3A-4A Conference for the third year in a row. Their reward in the draw is the West No. 1 seed for the second straight year and a top-three seed for the sixth time in six years. Freedom has advanced to the West final four of the last five years. Danisha Hemphill is the top scorer in Burke County at 20 points per game.

North Buncombe finished third in the Western Mountain Athletic 3A Conference. This is the third straight year the Black Hawks are in the state playoffs, but the team is looking for the program’s first postseason win since 2010. This is the third playoff state meeting between the two with Freedom winning both the previous games in 2010 and 2014.

Like Freedom, Hickory battled their own COVID quarantine this season, as well as sitting out games due to the COVID issues of other teams. The circumstances led the Red Tornadoes to play just 10 games, nine in the conference. They dominated much of the competition, but an early-season loss at Freedom put them in the race for a wildcard slot, which they claimed, despite a loss to Alexander Central last Saturday morning. Hickory returned to the third round of the playoffs last year for the first time since 2015, and many of the key players are back. A tall team in the post, Hickory is led by Finley Lefevers, who can scrap down low or drop out to the perimeter for long-range jumpers.

NW Cabarrus was able to play all its South Piedmont 3A Conference games, which enabled the Trojans to post a 10-2 record and edge Cox Mill, which went 9-2, for the championship. Coach Jarmaine Spruill took over the program in 2015 after the team went 0-22 the previous season. The Trojans won one game her first season and steadily climbed to clear the .500 mark last season. They are looking for their first playoff win since at least before 2005 (the last NCHSAA bracket posted). Aliciah Fields leads the team with 20 points per game.

Alexander Central was originally left out of the bracket in the initial release by the NCHSAA, but the Cougars’ 8-3 conference record was good enough to snatch a wildcard slot. The Cougars can probably thank a victory over Hickory last Saturday morning for the playoff shot. That game, scheduled for last Tuesday, was initially postponed due to COVID concerns but was rescheduled. Seniors Gracie Harrington and Nikki Hagy lead the team at just over 13 points a game. Hagy has nearly 12 rebounds per game.

Ashbrook won the Big South 3A Conference with three sophomores as the top scorers. Kennette Bess has 17.2 points per game with Aaliyah El (13.6 ppg) and Madison Cole (12.6) right behind. Their only conference loss came as a result of a forfeit when the Green Wave did not have enough players for a game at Forestview. After reaching the regional semis or finals from 2016 to 2018, the Green Wave lost in the first round two years ago and round two last year.

This is likely a game in which the seeds will not matter. South Caldwell (5-6) placed fourth in the Northwestern 3A-4A Conference and lost its only game to McDowell, the other 4A school in the league. But the Titans could only play nine games (3-6), which allowed the Spartans to win the 4A part of the conference. The NCHSAA’s random drawing put the Spartans at home as the No. 2 seed. Junior Olivia Miller is the only player to average double digits in scoring (18.7 ppg.). This is the second playoff appearance in a row for the Spartans, who are looking for their first postseason win since 2016.

West Forsyth finished in a tie for first with East Forsyth in the Central Piedmont 4A Conference. However, because the league has six members, the NCHSAA allotted it only one automatic playoff berth. West Forsyth lost the draw, which put the Titans in with the other wildcard teams for the random draw for seeds. West Forsyth got the No. 15 spot. The Titans won the 2019 4A state title, then were ousted in the first round last year.

On a night the chilly, winter winds were whipping across the pitch, the Foard boys’ soccer team was able to bask in the glow of a dominant shu…

Bunker Hill’s Addison Wray looks for room to drive to the basket during this photo from the regular season.