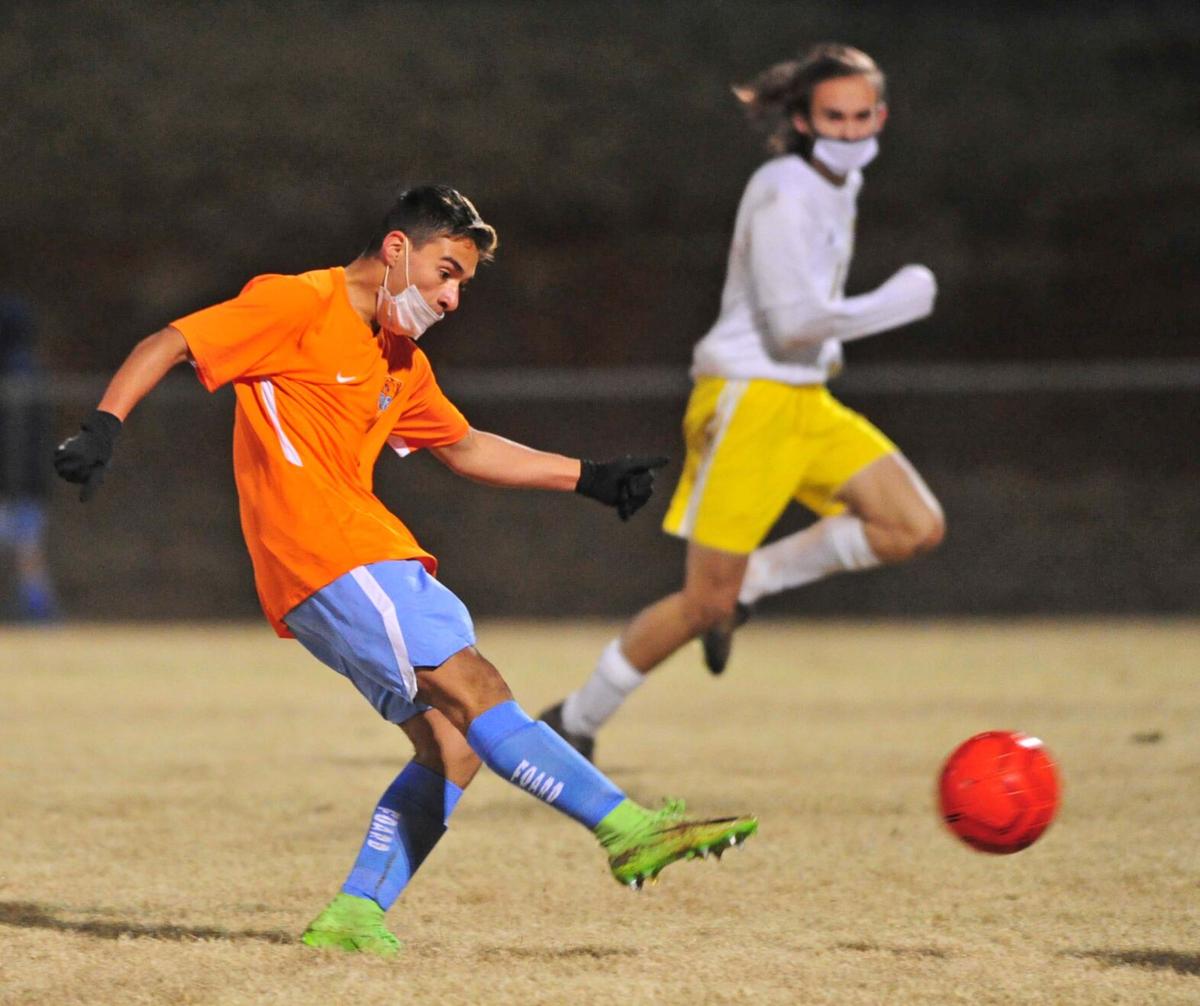 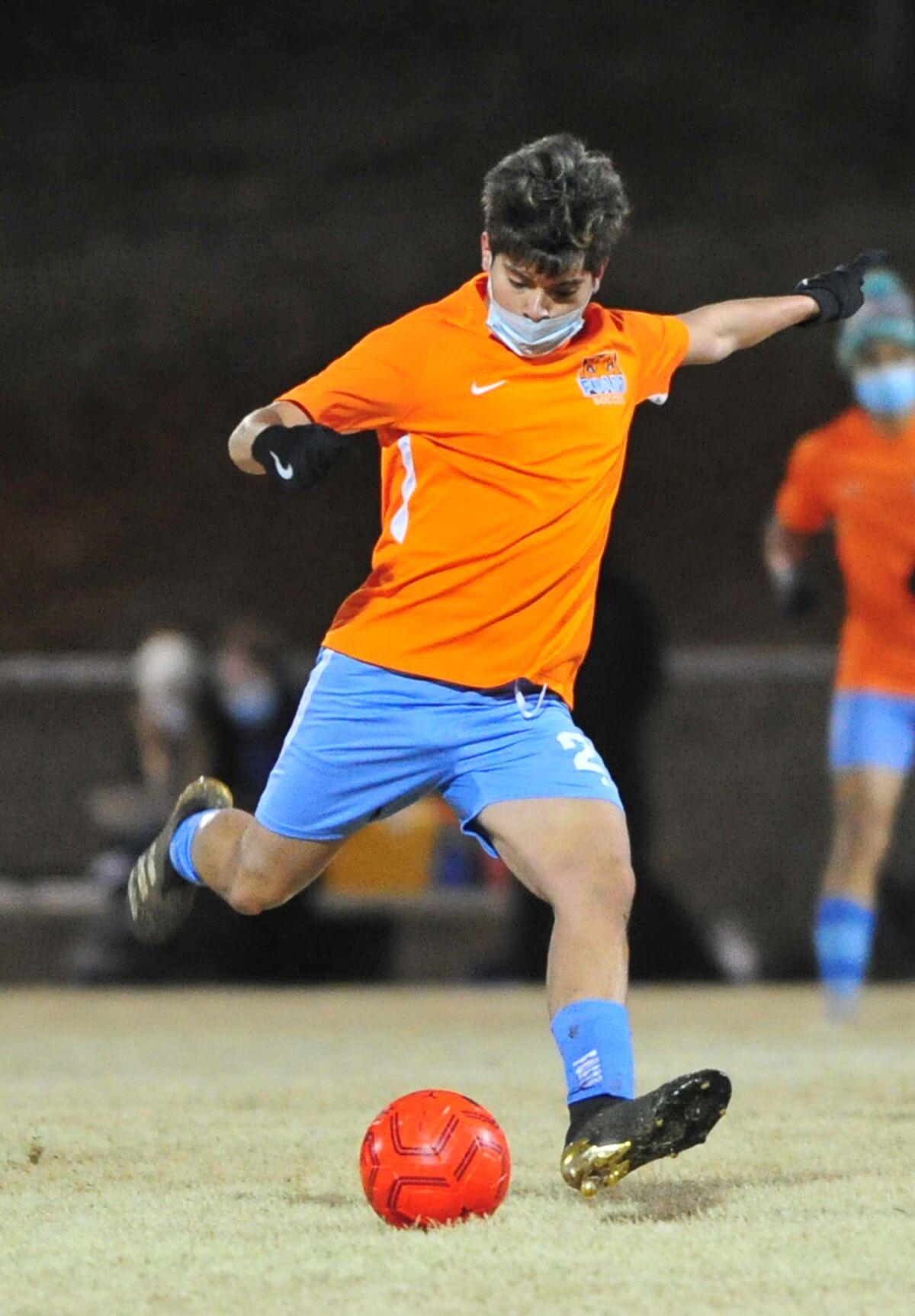 Fred T. Foard's Carlos Erazo-Rojo (20) makes a play on the ball during the game against West Iredell Monday in Newton. 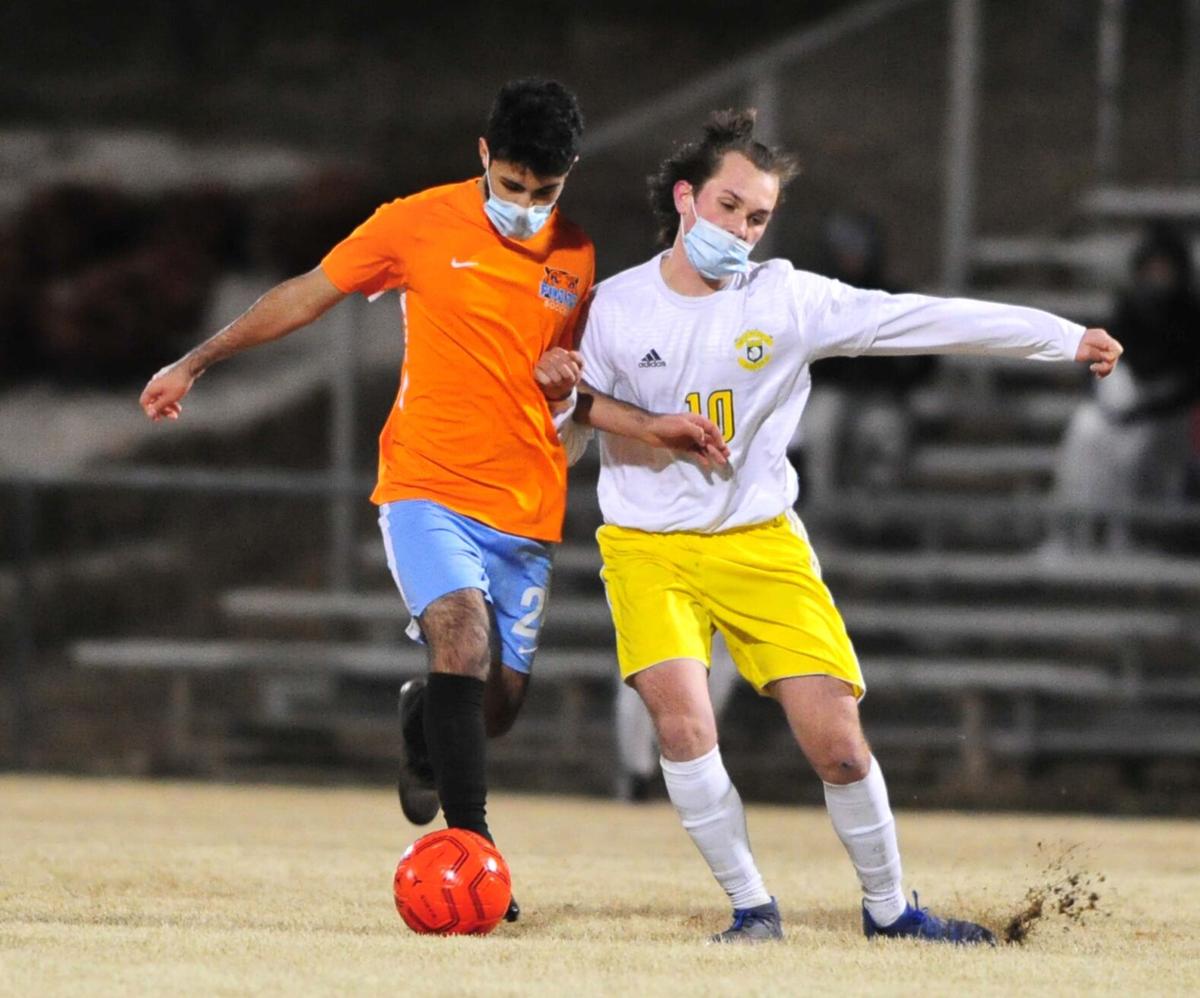 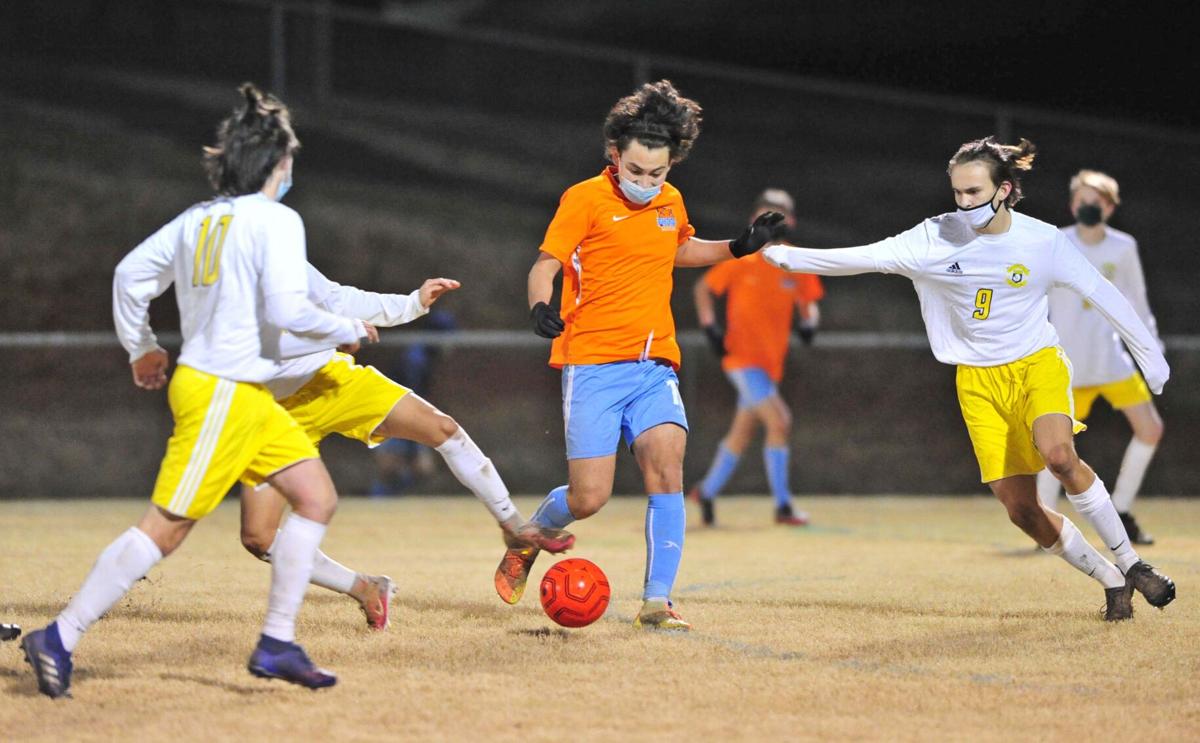 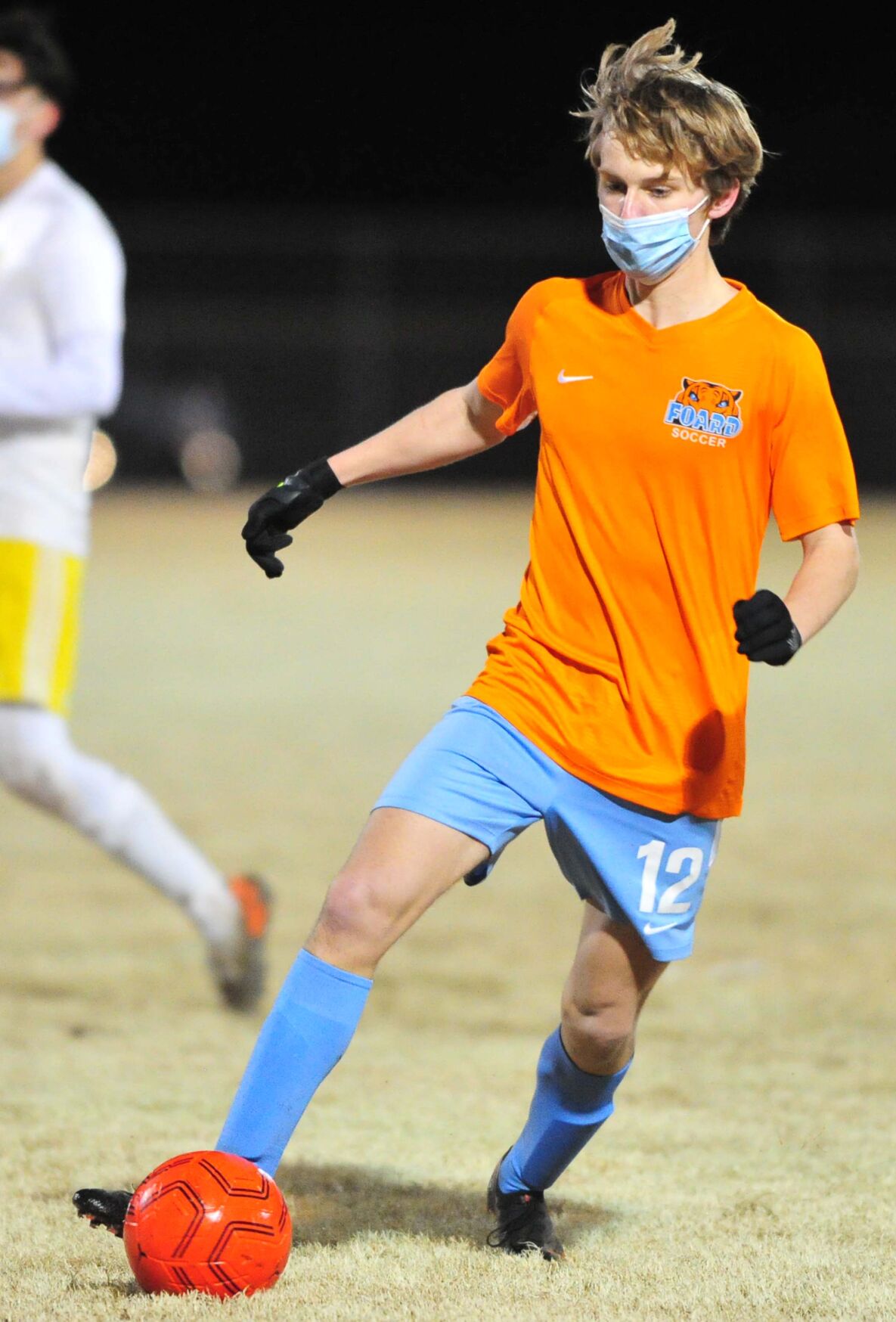 Fred T. Foard's Connor Josey (12) brings the ball downfield during the game against West Iredell on Monday in Newton.

On a night the chilly, winter winds were whipping across the pitch, the Foard boys’ soccer team was able to bask in the glow of a dominant shutout performance, 5-0, over West Iredell.

The Tigers are now 2-0 on the young season and have yet to allow a goal. The Warriors are even at 2-2.

Foard controlled the ball with long possessions throughout the contest thanks to passes that were as crisp as the air on the first night in February.

“The boys did well tonight in maintaining passes and had a good combination of plays,” said Foard coach Scott Goforth, noting he has a young squad in 2021. “But we have a good group of seniors.”

Playing into a strong steady and biting breeze in the first half of a home game that made the evening a rare occasion the mandatory masks worn by players were a welcome piece of equipment, the Tigers picked up a pair of goals prior to intermission. Both came off the foot of Josue Leal.

But in the second half, the Tigers opened with possession and with the wind at their backs. As a result, the Warriors rarely had possession of the ball across the midfield stripe and their only shot on goal came on a direct kick from nearly 40 yards away.

Meanwhile, Foard was relentless on the attack. Constantly pressing the ball in and out of the corner looking for creases in the middle of the West Iredell defense, the Tigers sent 15 balls toward the Warriors’ goalkeeper.

“We did, but at the same time I have a lot of confidence in the defense we have,” Goforth said about his offense being so dominant the defense was rarely pressed into action. “I think that helped us spring our attack. Our two center backs especially, Erik Leal and Carlos Erazo, both did a good job of strangling their attack. The defense actually had a very good performance tonight.”

David Tamas made it a 3-nil game when he corralled a rebound and drilled it into the West Iredell net.

The other two goals came within moments of one another.

Erazo took control of the ball in the middle of the field and launched a 35-yard shot up and over the outstretched fingertips of the Warriors’ keeper. Then following the kickoff, the Tigers stole the ball and Jordan Del Pilar booted the final goal of the night into the net.

Goforth acknowledged the challenge of playing a soccer season in late winter as opposed to the normal fall campaigns for the boys.

“Huge difference — 15 miles per hour wind tonight versus a nice fall night in September. It is an adjustment for the boys to make,” Goforth said, noting they have tried to take advantage of colder days to practice since November. “Getting past the cold is a hurdle.”

The Tigers are slated to host Patton on Wednesday. West Iredell is off until Monday when the Warriors will play at home versus East Burke.

The North Carolina High School Athletic Association announced its brackets Sunday for the 2021 girls basketball tournament. Because of COVID-1…

The winter portion of the sports schedule is close to wrapping up. High school basketball will crown its region and state champions. (Previews…

Fred T. Foard's Carlos Erazo-Rojo (20) makes a play on the ball during the game against West Iredell Monday in Newton.

Fred T. Foard's Connor Josey (12) brings the ball downfield during the game against West Iredell on Monday in Newton.