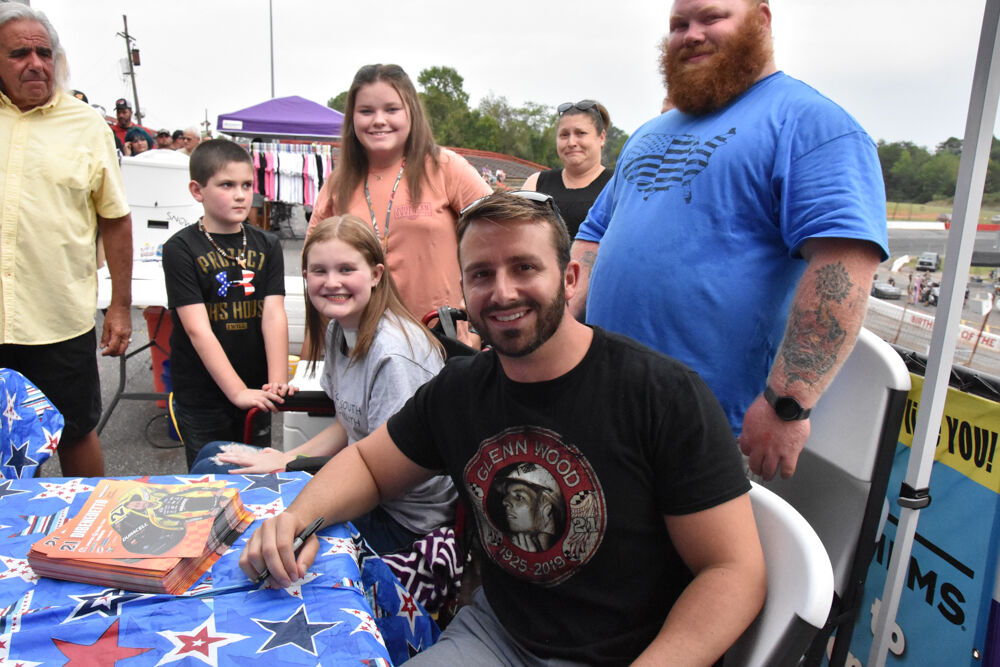 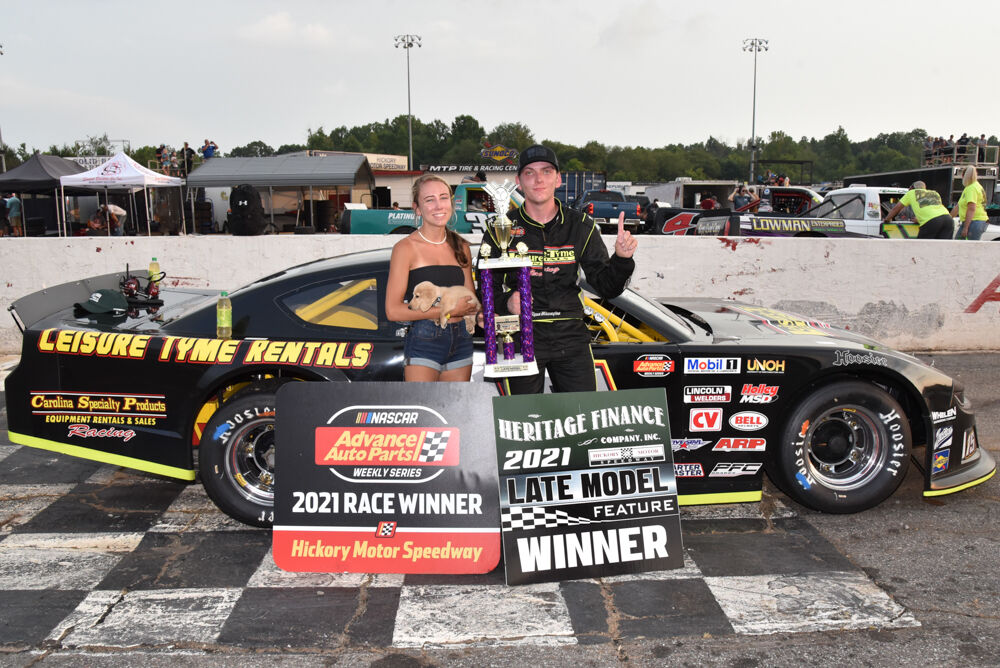 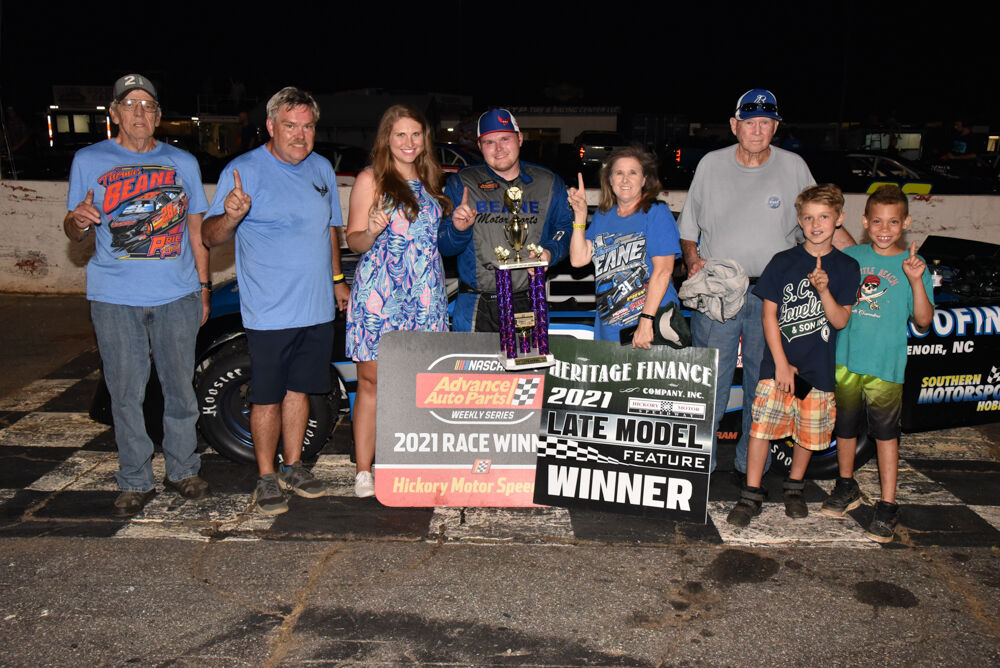 Hickory Motor Speedway hosted Matt DiBenedetto Night on Saturday in recognition of the NASCAR veteran who was a frequent racer at the track years ago.

The track also held six races on the night.

Leading off the night’s action would be the Heritage Finance Late Models with the first of two 40-lap races. Ryan Millington in the #15 would start from the pole with Zack Miracle in the #32 to his outside. Row two would see Mitch Walker in the #15 and Josh Kossek in the #44 side by side for the start. Millington would move to the early lead as Walker would challenge Miracle for second. Miracle would take the spot as Walker would then face a challenge from Kossek for third. Kossek would take the spot and move up to challenge Miracle for second. Kossek would complete the pass and set sail for the leader, Millington. The halfway point would see Millington, Kossek, Miracle, Walker, and Zach Bruenger in the #81 make up the top five. Thomas Beane in the #31 would pressure Bruenger for fifth. Beane would make the pass and bring the #12 of Austin McDaniel by Bruenger for sixth. Millington would prove too strong on the night and take the win leading flag to flag. Kossek would finish second and Miracle would come home in third.

Next up was the Super Trucks with a 35-lap feature. Jacob Weidman in the #77 would pace qualifying and start from the top spot with Charlie Watson in the #9 to his outside. Ricky Dennie in the #6 and DJ Canipe in the #29 would make up row two for the start. Watson would pull to the lead from the high groove. Josh Goble in the #65 would move around Dennie for third. Lap 8 would see Dennie take the spot back from Goble. Allen Huffman in the #51 and Clark Houston in the #6 would have a good clean battle for fifth with neither giving an inch. Watson would go on to take the win. Weidman would take second and Dennie would grab third.

The Heritage Finance Street Stocks were featured in a 30-lap event. Cody DeMarmels in the #12 would start from the pole position with Marlin Yoder in the #08 to his outside. Row two would see Jesse Clark in the #5 and John Clark in the #5X side by side for the start. DeMarmels would move to the early lead with Yoder facing a challenge from Jesse Clark. The halfway point would see DeMarmels, Yoder, Jesse Clark, Marshall Sutton in the #64, and John Clark as the top five. The caution would fly on lap 16 as Jesse Clark spun in turn two. The restart would see DeMarmels and Yoder bring the field back to the green flag. DeMarmels would battle with Yoder, but pull back to the top spot. The caution would quickly fly on lap 18 as the #7 of Rick Hale would spin in turn four. DeMarmels and Yoder would pace the field back for the restart. DeMarmels would move to the lead as Yoder would face a challenge from Sutton for second. DeMarmels would take the win. Yoder would finish second and Jesse Clark would take third.

The 4-Cylinders would hit the track next for 20 laps of battle. Curtis Pardue in the #17 would start from the pole with Cody Combs in the #9 to his outside. As Pardue and Combs would battle for the top spot the #11 of Robbie Trivette would move around both to take the lead. Combs would move under Trivette with three laps to go. Contact between the two would send both cars into the outside wall. Trivette’s car would be done for the night. The restart would see a duel between Pardue and Combs. Pardue took the checkered flag. Combs would finish second and Trivette would take third.

The Heritage Finance Late Models were next for the second 40-lap feature. With the field inverted from the finishing order of race one, Andrew Grady in the #1 and Zach Bruenger in the #81 would start in row one. Row two would see Austin McDaniel in the #12 and Thomas Beane in the #31 side by side for the start. Bruenger would use the high groove to take the early lead. Beane would follow in Bruenger’s tire tracks and move to second. McDaniel would press the issue going three wide in his quest for the top spot, but have to drop back in line. Beane would move around Bruenger to take the top spot. Ryan Millington in the #15 would move around McDaniel for third on lap 19. The battle for fifth would see five cars wanting one spot with Grady, Mitch Walker in the #15, Zack Miracle in the #32, Josh Kossek in the #44, and Blake Lithuanian in the #59 jockeying it out for position. Millington would battle with Bruenger for second before making the pass with three laps to go. Beane would drive on to take the win. Millington would take second with Bruenger grabbing third.

Finishing out the night would be the Paramount Auto Group Limited Late Models for 50 laps in the Paramount Kia ’BIG 10’ Chase for the Championship. Dexter Canipe, Sr. in the #5 would start from the pole position with Mason Maggio in the #12 to his outside. Row two would see Dexter Canipe, Jr. in the other #5 and Max Price in the #22 side by side for the start. Both Canipes would elect to start from the rear, hoping to snag a $500 bonus for the win. Maggio and Price would battle door to door for three laps until Maggio would nose ahead. Mark Johnson in the #13 would move to third. After starting at the rear Dexter Canipe, Sr. would move to seventh by lap 10. Akinori Ogata in the #14 and Bryson Ruff in the #24 would both move around Johnson for third and fourth, respectively. Maggio, Price, Ogata, Ruff, and Dexter Canipe, Sr. would be the top five at halfway. Lap 35 would see Dexter Canipe, Sr. move around Ruff for fourth. The caution would fly on lap 44 as the #61 of Justin Hicks would spin in turn four. The restart would see Maggio and Price bring the field back to the green flag. Maggio would pull to the lead as Ogata would move to second around Price. Maggio would drive on to take the win. Ogata would finish second with Price taking third. Dexter Canipe, Sr. would battle from the rear to finish fourth.

The CARS Racing Tour returns to the 3/8 mile oval next week for their annual Throwback 276. The NASCAR Advance Auto Parts Weekly Series returns to action in two weeks with a full slate of action.

Are the Green Bay Packers pretenders?