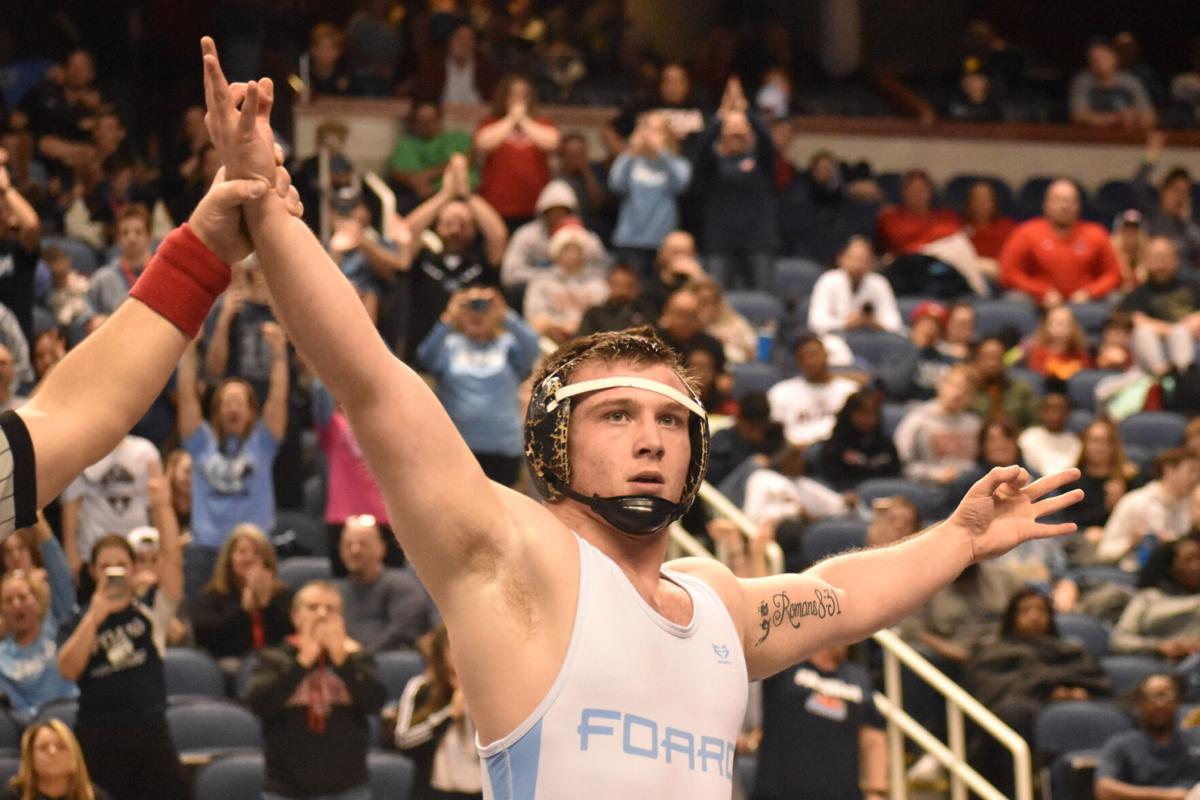 Fred T. Foard's Landon Foor celebrates after winning his third straight 2A state wrestling title this past February in Greensboro. Foor will look to close out his high school career with another individual championship when the Tigers return to action next April. 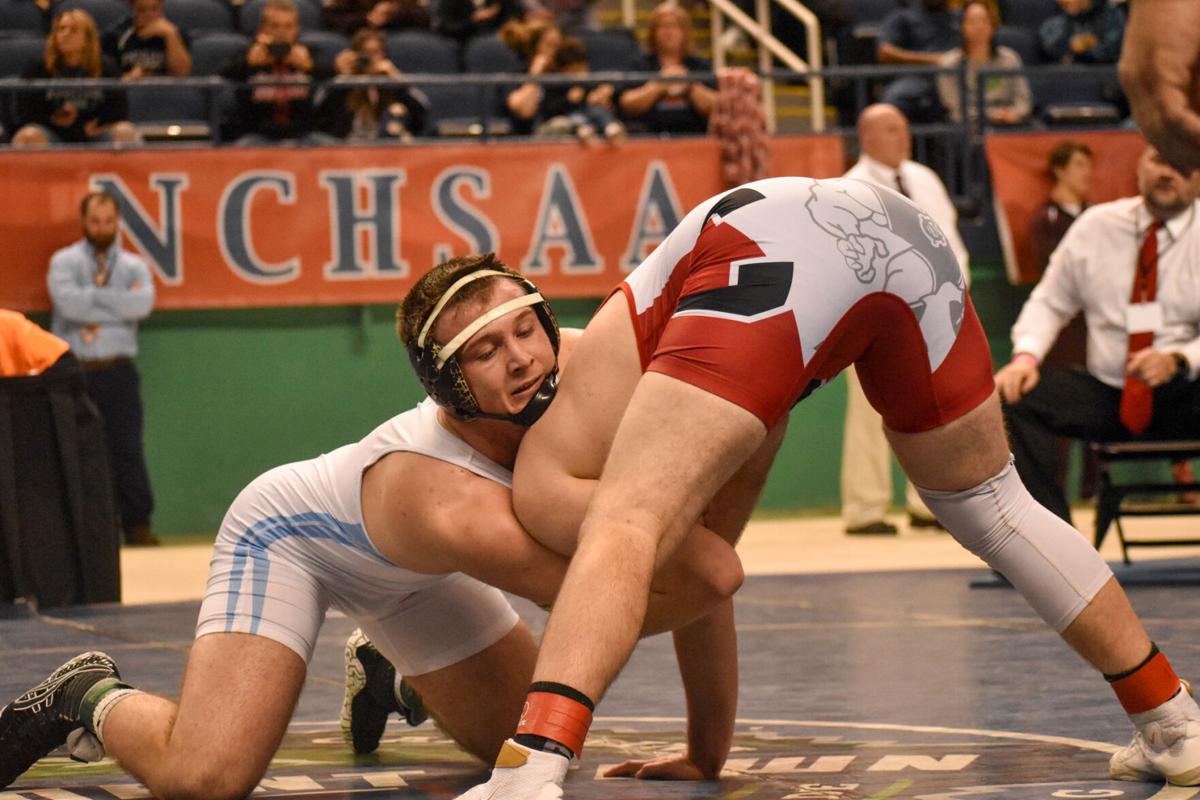 Fred T. Foard's Landon Foor, left, works the head of Newton-Conover's Cole Clark during the 2A state wrestling tournament this past February in Greensboro.

In his last three seasons, Foor has compiled a record of 151-2, and now the three-time state champion is entering his final year of high school and is on his way to being etched into the history books for North Carolina wrestling.

Hickory Daily Record sports correspondent Jackson Shoe recently sat down with Foor to discuss his upcoming senior season, among other things. Here's a transcript of their interview:

During this past season’s run when you won state, you won the tournament on a pretty injured ankle. During that run in between matches, what was keeping you going through the pain and discomfort?

Wrestling is a tough sport and there are a lot of injuries, and you stay beat up the entire season. But pretty much my whole life the goal has been to be a four-time state champion. I hurt my ankle really bad, I tore some ligaments off my ankle and had a pretty deep bone bruise. But knowing all of the hard work I’ve put in throughout the years, that’s what I was telling myself in between matches. I just needed to get through four matches and in between matches I’m icing and taping it, and luckily with the COVID pandemic I had months for it to heal.

There are a lot of different rankings, but I believe I was ranked 14th on OpenMat. I believe that as a North Carolina kid I do get cut short and there are kids above me that I’ve beaten or beaten kids that they’ve beaten, but you have to go prove yourself consistently. If you look at my state results in North Carolina 2A, and I had some good if not great wrestlers in my bracket, but comparing them to guys in California, New York and Pennsylvania guys is tricky. I had two close matches at states and this year we didn’t have a national tournament like high school nationals. My ranking is really high because I go to big national tournaments and show out and this year I didn’t have that chance and the last competition they got to look at was the state tournament where I had two close matches, and they will say to themselves if they don’t know about my ankle that he almost lost to two North Carolina kids. So I could see them shortcutting me on that front, but this season I’m looking forward to proving them wrong.

While watching your matches you have incredible mat IQ and you rarely take shots and miss. With that being said, what college or Olympic wrestler is your biggest influence and what do you take from them?

I'd say if I had to base it off anything, it would be Ohio State and their style. I mimic Kyle Snyder and Nathan Tomasello a lot. I like to get off angles and break down a lot.

I think it’s a great thing. Like you said, (Newton-Conover) Coach (Eddy) Clark has a good thing going on, (West Lincoln) Coach (Butch) Ross and even St. Stephens and Coach Billy Baker even though they are 3A, having that competition keeps you working and keeps you humble. Even though we are a great program, we have four great programs all within 20 minutes of each other. And if we aren’t working hard every day, living the right lifestyle and if we aren’t being consistent, you can get beat.

Do you still maintain relationships with coaches and friends from your old hometown?

Yeah, I still keep in contact with people from Georgia, and I train a lot up in Mocksville as well.

What does it mean to possibly be North Carolina’s ninth four-time state champ?

Like I said earlier, it’s always been the goal, and as of now they moved the state tournament back to June, but it’s definitely a blessing. There is a lot of stress that comes with it. There’s a lot that people don’t see, especially the pain, the adversity and the hard times, but I’m grinding, continuously working hard, and God gets me through it all.

How has your training schedule changed during the COVID-19 pandemic and do you like the extra time you’ll be getting with the season starting later?

It impacted everyone differently, but fortunately I’ve been blessed to have a pretty nice home gym setup and that gives me the ability to train with my peers whenever I choose. I’m actually a little bit excited about the season getting pushed back. I have a little bit of a hip impingement right now and that will give me more time to get that healed. But I am disappointed that as of right now, myself and my team won’t have the chance to compete for the dual team title, but hopefully that will change.

In the national wrestling picture North Carolina can get shortchanged. In your opinion, in the next five to 10 years how can they step it up?

There are different organizations, and if these organizations could come together and collaborate I think that would be effective. I feel like a lot of the times we take our national teams and it's not the best team we can send out there, which hurts our national outlook. But in the state we have great clubs including Combat Athletics, Strong and Courageous Wrestling Club, Crew Wrestling Club, and if you keep getting kids in these clubs it will help. If you look at it back from when I was in third grade which was a long time ago, but Team North Carolina would go to the AAU national duals and almost all 50 states would be represented and we were the worst team. Now when we take our true best team we are a top-15, top-10 state in the country, so if we continue to strive to be better and our clubs come together and work out together, we can continue to go to big tournaments and continue to rise.

How do you feel when a coach bumps their guy away from you and sends out a JV wrestler for you?

It can definitely be frustrating. It is especially frustrating at certain points in the season. I have stretches in my season where I get thrown a lot of JV kids and I understand it because you have your seeding for regionals and you want to get your kids into the state brackets and save their record. But at the same time in the month of January I won’t wrestle a match and that can be frustrating, but I understand it and during the season you can miss mat time wrestling the JVs or getting forfeits. But that’s why it’s important that you train in the offseason and attend national tournaments, you can make up that lost mat time and that is so crucial.

What was the selling point for you signing with Appalachian State and how many other schools had offers for you?

Like I said in other interviews, I had some good offers and some great coaches recruiting me with great cultures and great programs, but ultimately Appalachian State was the right place for me. JohnMark Bentley made a great sale on the visit and the culture there is great, it’s really a family atmosphere. But JohnMark is a man of his word and they do the right things, they train hard and they live the right lifestyle. And when you have that honesty and the bond there, you can do great things together.

Who’s the person you most learned from over the years? It could be a teammate, coach or family member.

I have had a plethora of amazing coaches from my first club, in which I trained with the Leonhardts at Excalibur Wrestling Club. But I would say the most important to my wrestling career are Josh Stanley and Shelton Sales at Combat Athletics. When I went to Combat my wrestling career took off, that bond was there and we collaborated well, and I owe so much to them.

What do you want your legacy to be at Foard?

I talked earlier about my ankle injury and that my hip is a little impinged and everyone looks at me like I’m some superstar wrestler, and that’s cool and I thank God for that. But I want to be a great teammate and a great leader, leave a good example. Some wrestlers might give off a Hollywood vibe where they are too good to talk to people, but I always want to be there for people, be a good friend and try to help them grow as a person and as an athlete.

What’s your motivation/rally cry for this final season?

The Maiden volleyball team has been consistently solid over the past several seasons, and the pieces are in place for the Blue Devils to have …

Over the past five seasons, the Maiden volleyball team has posted a combined record of 121-20, including a 65-5 mark in South Fork 2A Conferen…

Last season, the Fred T. Foard volleyball team had a loaded roster that led the Tigers to a 32-1 record and a 2A state championship. Foard als…

The Fred T. Foard volleyball team grabbed headlines in 2019 by finishing 32-1 and capturing the seventh state title in program history. But th…

Coming off a record year with the 2019 Dick’s Sporting Goods Classic basketball tournament that saw each participating school receive over $4,…

Fred T. Foard's Landon Foor celebrates after winning his third straight 2A state wrestling title this past February in Greensboro. Foor will look to close out his high school career with another individual championship when the Tigers return to action next April.

Fred T. Foard's Landon Foor, left, works the head of Newton-Conover's Cole Clark during the 2A state wrestling tournament this past February in Greensboro.