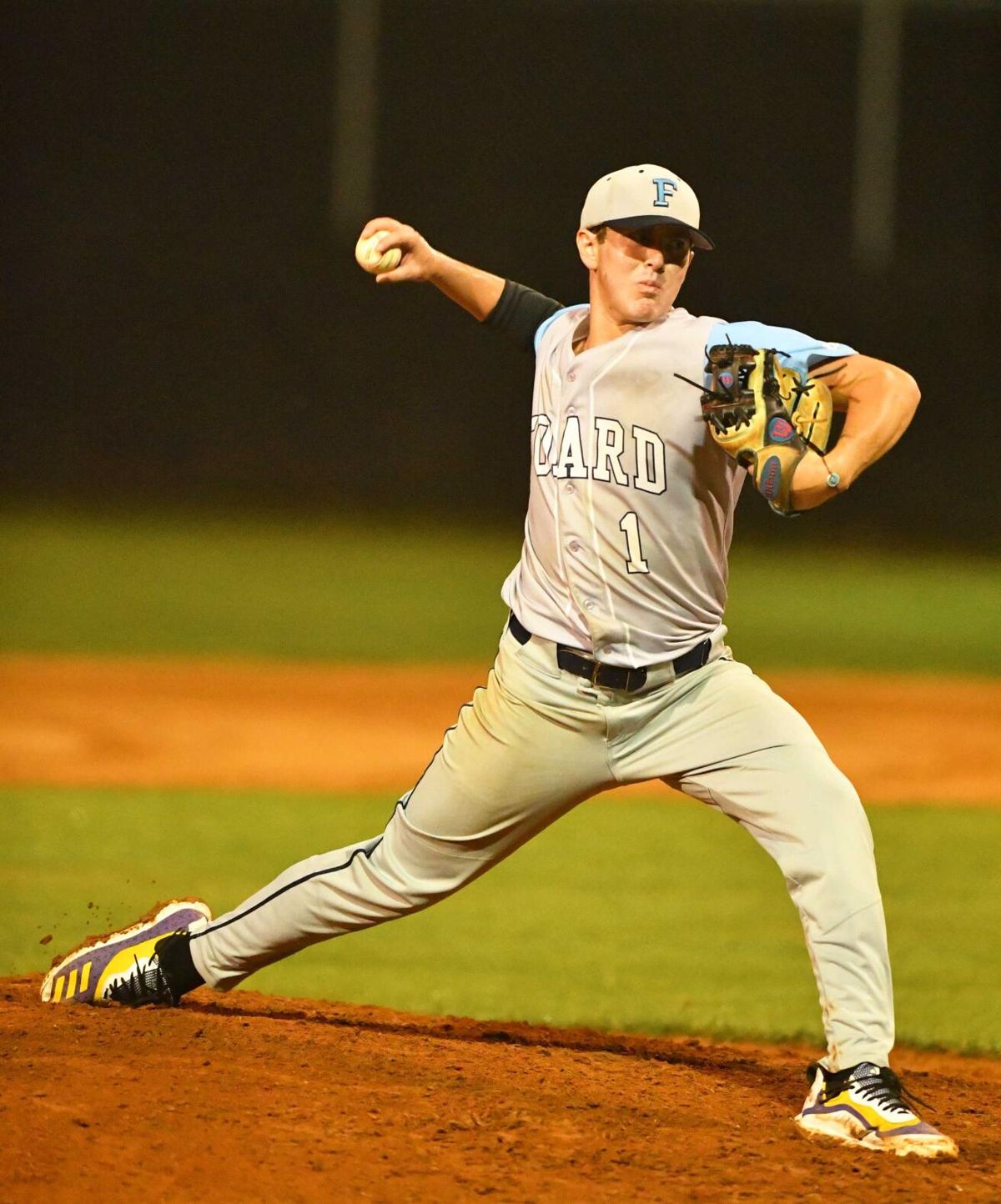 Fred T. Foard’s Lane Essary, 1, stretches out to release a pitch late in the game against Bunker Hill Tuesday in Claremont. Essary threw 6 1/3 innings of one-run, two-hit ball with 16 strikeouts, five walks and a hit batsman in the Tigers’ 6-1 win over the Bears. 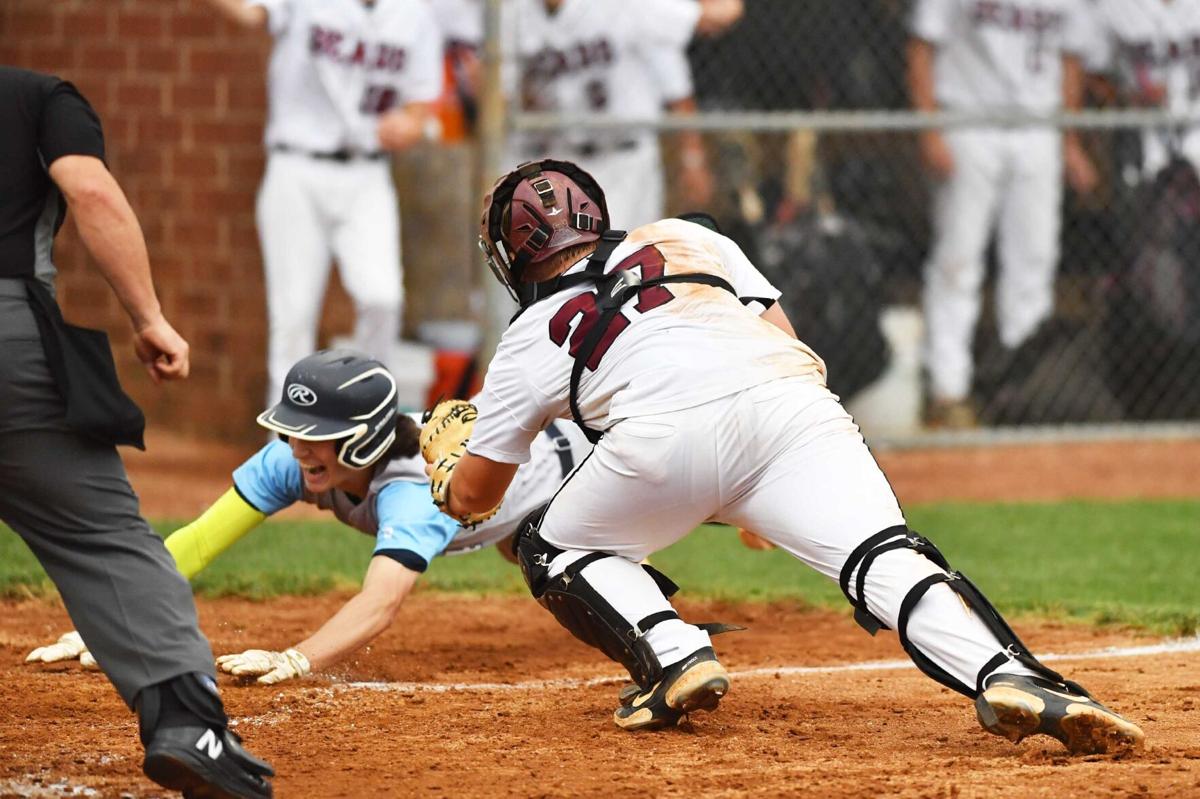 Fred T. Foard’s Conor Peschel, 4, is tagged out by Bunker Hill catcher Jordan Yoder, 27, while trying to score in the third inning.

(NOTE: This story has been updated to reflect the fact that the game will now be played at 1 p.m. Thursday at Lenoir-Rhyne.)

CLAREMONT — Things are coming down to the wire in the Northwestern Foothills 2A Conference baseball standings. After Fred T. Foard’s 6-1 road win over Bunker Hill on Tuesday night, the Catawba County rivals are currently tied for first place with one game remaining.

That game takes place on Thursday at 1 p.m. at Lenoir-Rhyne, when the Tigers face the Bears with the league’s top state playoff seed on the line. Following Tuesday’s contest, each team is 12-1 both overall and in Northwestern Foothills 2A play.

“I think we do what we did tonight,” Foard coach Channon Vogel said of what his squad needs to do to earn another victory on Thursday. “We throw strikes, let our defense work and then create opportunities on offense whenever they come and just have quality at-bats every time we can. ... So if we can create that kind of pressure, I think it’ll be a fun game on Thursday. I hope the weather holds off and we can play it, but it’s gonna be exciting. That’s what you work all season for is that one game, so it’ll be awesome.”

For much of Tuesday’s game, it appeared Bunker Hill would wrap up its first conference title since 2018 and play for an unbeaten regular season in the finale. The Bears scored a run in the bottom of the second inning when Preston Workman earned a leadoff walk and scored on a one-out double from Jordan Yoder.

But Foard had other ideas, tying the score on an RBI groundout from Josh Swink in the top of the fifth. Logan Moseley scored on the play after making it to second on a double error and advancing to third on a sacrifice bunt from Josh Harwell.

The Tigers then surged ahead thanks to four runs in the sixth before adding an insurance run in the seventh. Bunker Hill committed four errors over the final two frames to aid Foard’s cause, with the Tigers receiving RBI singles from Braxton Tramel and Moseley to go with a two-run single from Harwell in the sixth before another run crossed the plate on a throwing error in the seventh.

“I think offensively we did a great job of getting guys on and creating pressure,” said Vogel. “They were able to get out of that pressure most of the night, but there were only two innings where we didn’t have somebody on. All the rest we had runners on, runners in scoring position. That created a lot of pressure on them.

“I talk a lot in practice about running groundballs out, running groundballs out, because eventually that puts pressure on them to come in and try to get the ball and make a good play,” he continued. “You keep continually sprinting out of the box and those guys see that, it puts more pressure on them. We’ve got good speed on this team and the boys really hustle, so I think that created a lot of pressure and the pressure got them at the end.”

Foard made just one error as compared to six defensive miscues by the Bears, who were outhit 5-3 for their lowest hit output of the season. Bunker Hill’s previous low hit total was six in a 10-0, five-inning home win over East Burke on April 29.

“We did kind of the opposite of what we said we had to do at the plate,” said Setzer. “(Foard starting pitcher Lane) Essary’s a good pitcher. We basically said early on that we had to put the pressure on them some and put the ball in play, and basically what happened was the exact opposite.

“They put the ball in play and put the pressure on us and in a one-run game when you’ve got a great pitcher on the mound, you can’t make mistakes,” he added. “They just multiply each other, and that’s what hurt us tonight.”

All five of the Tigers’ hits were singles, with Essary registering one in the third before Hayden Tabor, Tramel, Moseley and Harwell tallied base hits in the sixth. Conversely, Bunker Hill received Yoder’s double in the second before getting a two-bagger from Dalton Chapman in the third and a single from Ethan Hildebran in the seventh.

Essary was the winning pitcher after tossing 6 1/3 innings of one-run, two-hit ball with 16 strikeouts. The Tigers’ junior right-hander also walked five and hit one batter before giving way to Kylan Bolick, who recorded the final two outs for Foard.

“It started with Lane on the mound, just being a bulldog and throwing strikes, getting guys out,” said Vogel. “I think the turning point was the bottom of our lineup getting on base, laying the bunt down. ... I just appreciate the guys willing to do what it takes for the team to get a win.

“Nobody’s really selfish on this team,” he continued. “They just want a win and they don’t care who gets the credit. And that’s just a fun group of kids to be around and to coach.”

Casey Knighton took the loss for Bunker Hill despite striking out nine in 5 2/3 innings. The righty issued three walks and had a pair of errors committed behind him before being relieved by Workman in the sixth.

“They’ve kind of been winners all the way through,” said Setzer of Bunker Hill seniors Knighton, Hildebran, Dalton Chapman, Clayson Chapman, Pete Clampitt, AJ Carpenter and Brayden Martin, who were honored prior to Tuesday’s game. “They’ve been loyal to Bunker Hill High School and loyal to Bears baseball. ... Obviously it would have been a lot better to win, but baseball’s baseball and I told them we’re still 12-1, still moving on a little bit.”

Fred T. Foard’s Lane Essary, 1, stretches out to release a pitch late in the game against Bunker Hill Tuesday in Claremont. Essary threw 6 1/3 innings of one-run, two-hit ball with 16 strikeouts, five walks and a hit batsman in the Tigers’ 6-1 win over the Bears.

Fred T. Foard’s Conor Peschel, 4, is tagged out by Bunker Hill catcher Jordan Yoder, 27, while trying to score in the third inning.