Fauci affirms Biden's commitment to WHO. Here's what it means moving forward. 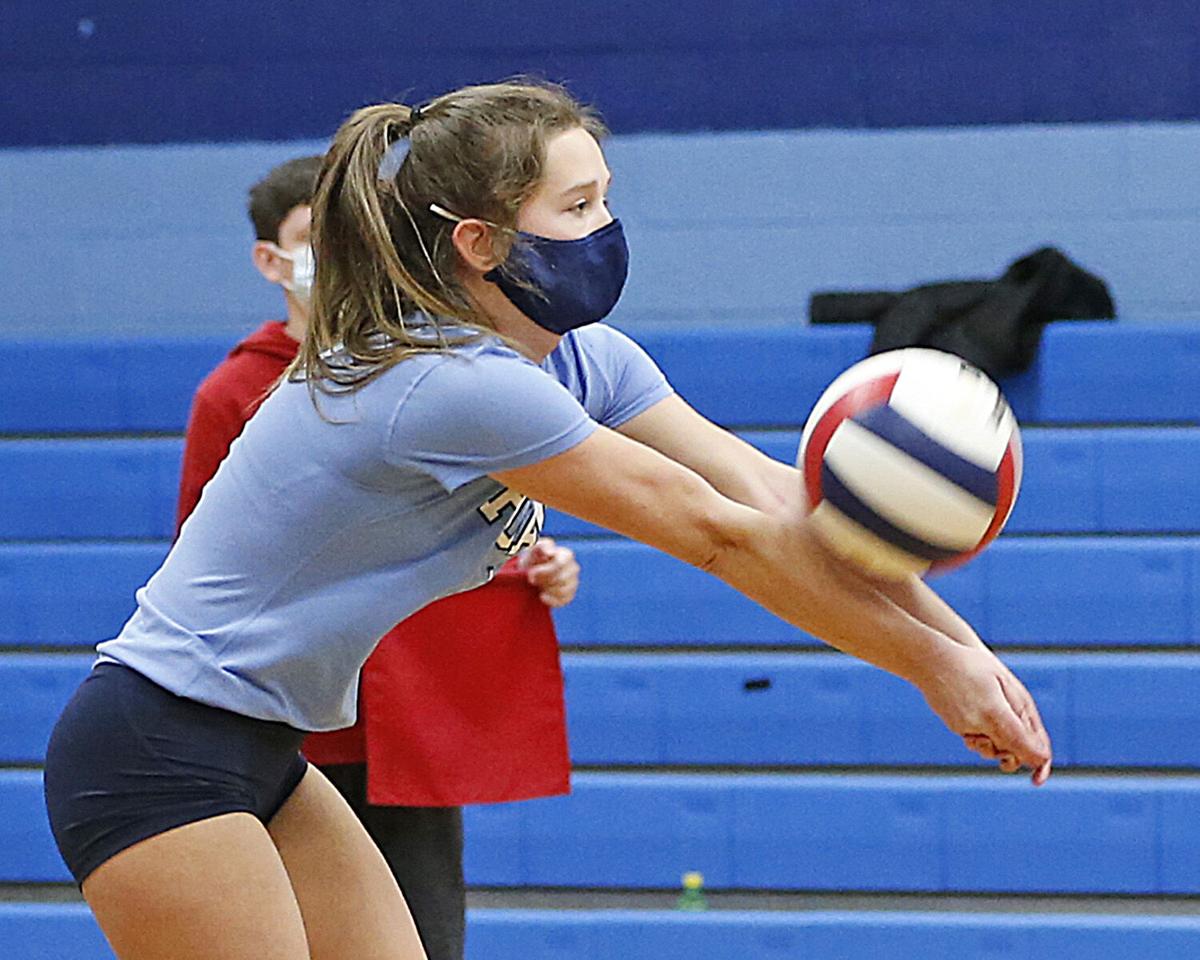 Foard’s Lyndsie Warren (4) returns a serve during a December match in Newton. 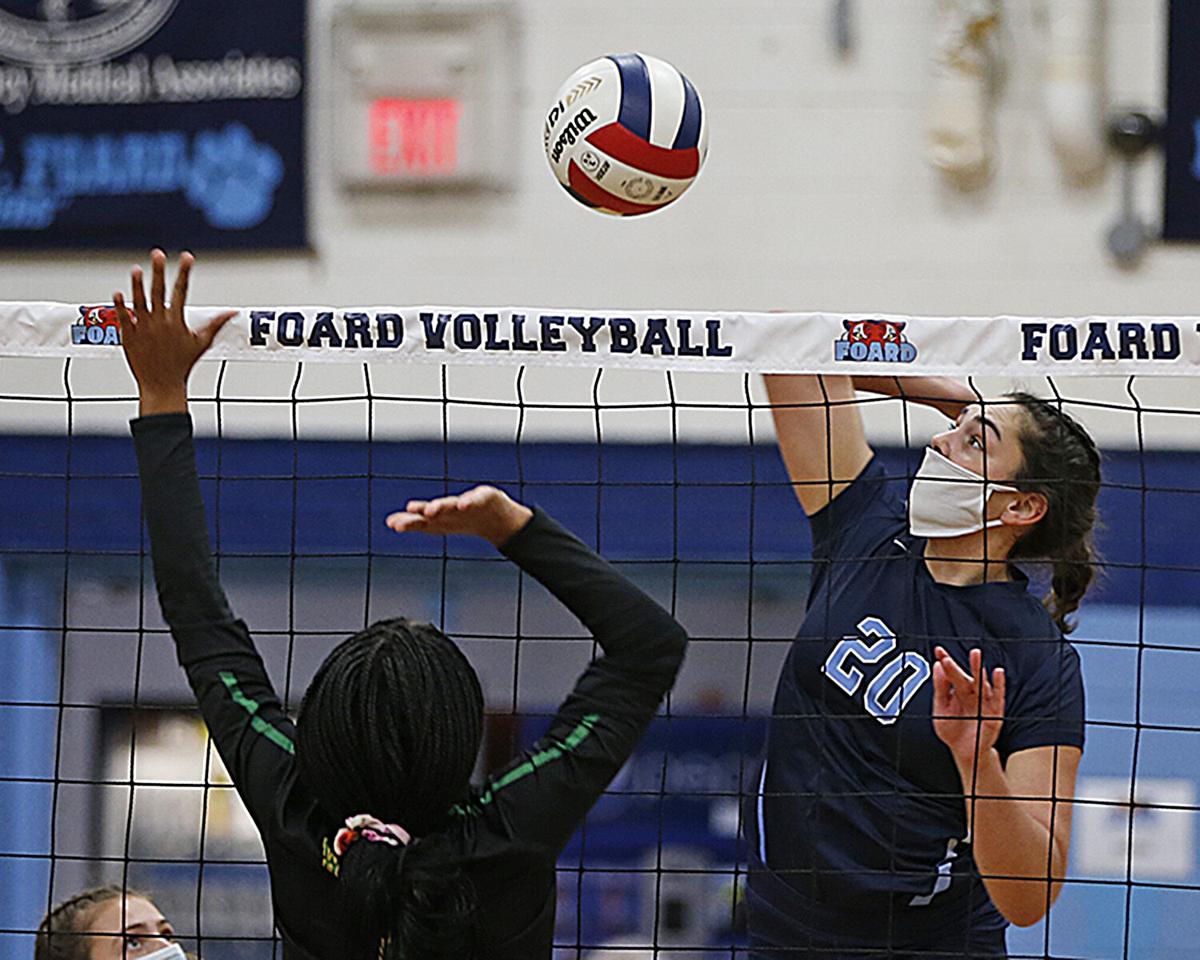 Foard’s Martina Foster (20) prepares to fire a shot past West Iredell’s Kahleah Gaither (1) during A December h in Newton.

The North Carolina High School Athletic Association (NCHSAA) will hold its first state playoffs in ten months as volleyball gets underway with the first round on Tuesday. Seven teams from the three area conferences covered by the Hickory Daily Record received automatic bids out of their respective leagues with Hickory receiving a wild card berth.

Concerns over COVID-19 limited the number of matches to 14 during this regular season, down from the normal of 22. That knocked out almost all non-conference matches for area schools (among playoff teams only Watauga saw a team out of conference). In the past, one could give an educated guess of how teams might match up against teams from out-of-conference competition. This year, it’s a mystery.

The inability to have non-conference matches also led to changes on how the brackets were created. Over the past few years, the NCHSAA used adjusted rankings supplied by MaxPreps to create brackets, giving the higher seeds to those with higher rankings. This year, the NCHSAA held a draw to place the teams in a bracket without regard to record – all first-place teams from each conference were placed in brackets, followed by the second-place teams from leagues that had seven or eight teams in the conference. Third place teams from leagues with nine of more teams in its conference and wildcard teams filled the remaining 16 slots each for East and West Regions in all four classifications.

Here is a preview of all six matches (stats used are submitted to MaxPreps by the teams.)

If there is a team in the state that is hurt most by the change on how playoff brackets are constructed this year, it is Foard. The defending 2A state champions have won 25 matches in a row, dating back to 2019, all coming via sweeps. Yes, although the Tigers did not lose a set this season, unless a higher seed is defeated, they will have just one home playoff match.

Champions of the Northwestern Foothills 2A Conference, Foard returns much of the team that ran the table in 3-0 sweeps in the playoffs in 2019. The Tigers are a versatile squad that can attack from anywhere at the net – led by hitters Michelle Thao and Megan Dorsey - with two skilled setters – Haley Johnston and Sarah Lingle – that find hitters in spots that can attack opposing weaknesses. Defensively, it is group that makes it tough for opposing attackers to find open spots in the court for kills. The Tigers’ back line always seems to be in the right place. They are fearless in facing power kills.

The Tigers are 70-29 all-time in playoff competition with seven state titles.

Owen will make the trip from Black Mountain as the top 2A team from the Western Highlands 1A-2A Conference. The Warhorses reached the playoffs with a win over Madison last Wednesday. Owen is making its first playoff appearance since 2018 and looking for its first playoff win since 2007 (4-15 overall). At the net, the Warhorses are led by sophomore Maesyn Gardiner, who also leads the team in digs.

The only match involving two schools from area conferences could be the best one.

Patton is the runner-up in the Northwestern Foothills 2A Conference with the only two losses coming against defending 2A state champion Foard. Behind 2019 conference player of the year Ella Gragg, the Panthers had their best season in school season a season ago, which included a run to the 2A state quarterfinals before bowing out to Brevard.

Gragg led the team again in kills this season and can be a tough shot maker from anywhere on the court, front or back. She has help on offense from Kenady Roper, who also leads the team in digs.

The Panthers are 4-8 all-time in the playoffs.

Due to postponements by other teams on COVID-19 quarantine, and then from its own shutdown, East Lincoln played just one match from November 24th to December 29th. With a revamped schedule set by the South Fork 2A Conference, the Mustangs played six matches in 10 days and won them all to claim the league crown.

East Lincoln has a roster that is heavy with juniors and seniors, as the top three attackers statistically are seniors, led by Jordan Gromlich, who also leads the team in blocks. Libero Kaylee Spees is a vacuum on the backline with 7.7 digs per set.

The Mustangs lost to Foard in the second round last year and are 12-17 all-time in the playoffs.

This is a matchup of teams that hope to redeem themselves after disappointing playoff losses a season ago.

This season, Maiden finished second in the South Fork 2A Conference with two of its three losses coming against champion East Lincoln.

The Blue Devils bring an experienced group to the court with nine seniors on the team. Abby Gantt and Adison Ford set up the offense for the Blue Devils with hitters Anna White and Savannah Lail leading the attack at the net. Libero Lainee Hentschel is the defensive anchor for Maiden.

West Wilkes blitzed the Mountain Valley 1A-2A Conference with just two set losses along the way. Senior Cheyenne Clonch leads the Blackhawks at the net, averaging 5.5 kills per set, and is the top blocker as well.

In 2019, Maiden won the South Fork and brought a 23-4 record into a home match as a fourth seed, but were upset by West Stokes. The Blackhawks were 20-0 and reached the second round as a No. 3 seed, but lost at home to Surry Central.

Maiden is 24-23 all-time in its playoff history while West Wilkes is 13-13. The Blue Devils swept West Wilkes in the first round of the playoffs back in 2017.

Hickory finished second in the Northwestern 3A-4A Conference with two regular season losses to champion Watauga. The Red Tornadoes added a third loss last week when they forfeited a match to St. Stephens held on November 24 due after they self-reported the use of an ineligible player for the match. The loss didn’t affect their playoff berth and they wound up getting the top draw among wildcard teams.

The Red Tornadoes are led by Virginia Tech signee Kellin Morin, whose 6-3 frame creates problems in the middle for the opposition. Morin leads the team in kills (4.5 per set) and blocks. Senior Bren White puts the offense into motion and is also second on the team in digs behind fellow senior Brooke Rowland.

Western Guilford won the Piedmont Triad 3A Conference this season, losing just four sets in the process. Although the Hornets are 23-28 in state playoff history, they’ve had little playoff success since at least 2006 (the last brackets published by the NCHSAA). After at least a decade absence, Western Guilford has made postseason appearances each year since 2015 but have just one playoff win. The Hornets were unbeaten at 26-0 back in 2018, but after a win in the first round, they were swept in the next round by East Chapel Hill.

For the second year in a row, Watauga nearly had a clean slate in winning the Northwestern 3A-4A Conference championship, losing just one set, which came in the final match vs. Hickory.

The Pioneers graduated a stellar class from the 2019 team that was undefeated until a loss in the 3A state quarterfinals. However, Watauga merely rebuilt, and it may be set for playoff success the next few years as it goes to the 4A class this fall. The Pioneers top two attackers – Caroline Farthing and Brooke Scheffler – are sophomores. Another sophomore, Faith Watson, led in blocks, with Farthing leading in digs. Juniors Brelyn Sturgill and Megan Patton lead in assists.

Watauga had the misfortune the past few years of going on the road in later rounds and suffering elimination. This year, it they continue to win, the Pioneers will play at home until the state final. They are 62-37 in playoff history.

North Henderson, third in the Western Mountain 3A Conference this season, is led on the attack by senior Linnea Harris with Abby Edwards as the team’s setter.

At 31-23 in their playoff history, the Knights lost in the first round a year ago to JM Robinson. They have not reached the round-of-16 since 2014.

A pair of teams with limited postseason success meet in the first round.

McDowell finished third in the Northwestern 3A-4A conference and took the league’s lone 4A playoff bid.

Making its second playoff appearance in a row, McDowell is looking for the program’s first playoff since reaching the third round in 2011. The Titans are 7-13 all-time in the playoffs.

Butler returns to the playoffs for the first time since 2017 after the Bulldogs finished third in the Southwestern 4A Conference and snatched wildcard berth. They are 7-16 in playoff history and have just one playoff win since reaching the third round in 2008.

The final two area teams left in the North Carolina High School Athletic Association’s volleyball tournament are familiar with each other.

Foard’s Lyndsie Warren (4) returns a serve during a December match in Newton.

Foard’s Martina Foster (20) prepares to fire a shot past West Iredell’s Kahleah Gaither (1) during A December h in Newton.