The Bandys volleyball team huddles up during a timeout in Monday's match against Lincolnton in Catawba. 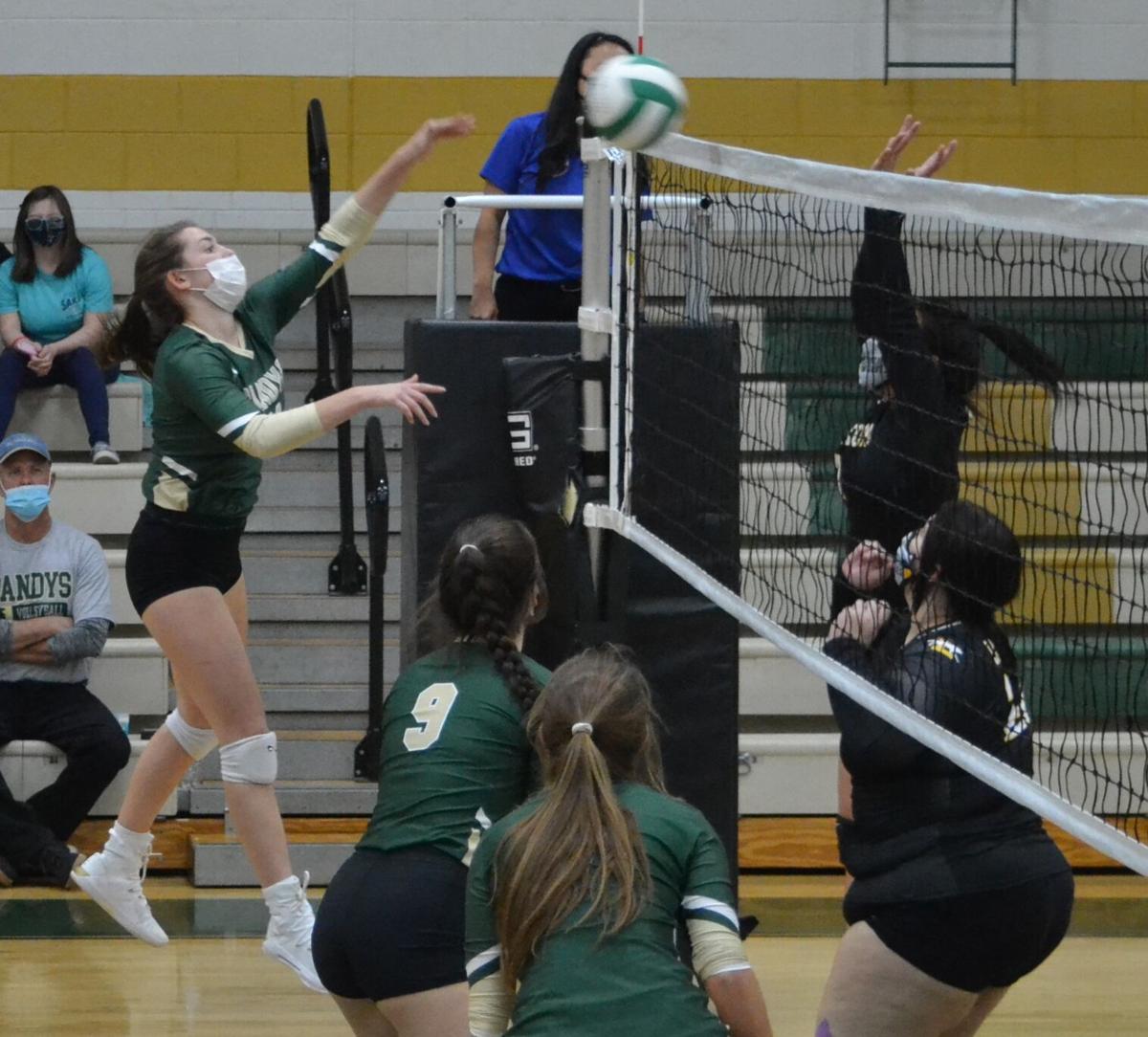 Bandys' Marley Beegle, left, goes head-to-head with Lincolnton's Leah Tweed as players from both teams look on during Monday's contest in Catawba.

CATAWBA — Following a three-set loss to Maiden in its season opener, the Bandys volleyball team swept Newton-Conover in a hard-fought match for its first victory of the 2020 season last Thursday. Then the Trojans welcomed Lincolnton to Bost-Matheson Gymnasium on Monday night, a team against whom they had won 27 consecutive sets dating back to Sept. 13, 2016.

It was more of the same for Bandys in its latest meeting with the Wolves, as the Trojans cruised to set victories of 25-6, 25-8 and 25-10 en route to their first winning streak since capturing three straight wins last October. Bandys defeated Newton-Conover in five sets on Oct. 1, 2019, before back-to-back three-set wins over Lincoln Charter and Lincolnton the following two nights.

With the win, the Trojans moved to 2-1 both overall and in South Fork 2A Conference play. Lincolnton fell to 0-3 in both after dropping its 10th contest in a row dating back to last season.

“I feel very confident that we can do big things. It’s just the follow through and the execution because we have a lot of seniors, but we also have some young talent as well,” Bandys coach Carlee Belk said. “So my hope is that we can all just get on kind of the same page and execute. I know we’re able to, but sometimes getting it together, figuring out where all the pieces fit, can take some time. ... I’m hoping that we will peak at just the right time and that by the end of the season we will make a name for ourselves.”

In what was a sign of things to come, Bandys’ first point of the match came on an ace. Bailey Reynolds was the first Trojan to record one, but it was Logan Dutka’s work behind the service line that really stood out in the opening set.

After a Lincolnton player made contact with the net to put Bandys up 8-5, the hosts reeled off 15 consecutive points with Dutka serving. She placed the ball well time and time again, and the Trojans’ setters put their attackers in positions to succeed. Alexis Bolding was particularly effective for Bandys as she notched several points on kills and tips, and while the Wolves were able to score late, the Trojans easily slayed them in the first set before continuing their strong play in the second.

“We have found out that in order to utilize all of our hitters better, but more specifically our middle who can hit a variety of sets, we’ve got to work on passes,” said Belk. “So that’s been another focus of ours is working on those passes and when we get good passes, we can do a lot more with our middle hitters.

It looked like Bandys might blank Lincolnton in the aforementioned second set, as the Trojans tallied the initial 18 points. Bolding contributed early with a kill and a block, while Lauren Howard registered several aces to help Bandys build an insurmountable lead. The Wolves outscored the Trojans 8-7 over the remainder of the set and got their first and only ace of the night from Naomi Concepcion, but it was an ace from Dutka that allowed Bandys to gain a 17-point set win and a 2-0 advantage in the match.

Howard continued to display her serving prowess to open the third set, putting a few more aces in the scorebook. Marty Huggins and Hannah Byrd also had aces for the Trojans as they pulled away once again, this time for a 15-point set win that secured their second sweep in five nights.

“We have been practicing our serves because last year it was a struggle and the first game of the season against Maiden we had some serving errors. We did a better job against Newton last game,” said Belk. “We had practiced hard in terms of serving location, we had the girls experience and practice more aggressive serving, different spins and whatnot, and I feel like that’s paying off. Slowly but surely I feel like we’re seeing improvement from our service game, we’re being a lot more aggressive.”

Notes: Howard led Bandys with eight aces, with Bolding notching a team-high 11 kills to go with four from Marley Beegle. Clements paced the Trojans with 20 digs, while Howard and Reynolds finished with 13 and 12 assists, respectively.... The Trojans have a winning record after three matches for the first time since starting 2-1 in 2014, which was also the last season they finished above .500 (11-10).... Bandys improved to 13-12 overall and 10-7 in South Fork 2A play under second-year head coach Belk, a 2008 Bandys graduate who lettered in three sports — softball, volleyball and basketball — for the Trojans before going on to play softball at Lenoir-Rhyne University.

The Fred T. Foard girls basketball team fell behind by double digits early in Thursday’s road game against Patton, but rallied to top the Pant…

IT'S GO TIME: Foard back in state title match, faces McMichael for 2A crown Saturday

It is said that “a rising tide lifts all boats.” Whether that applies in sports is conjecture, but it’s hard to ignore the success this area h…

The Bandys volleyball team huddles up during a timeout in Monday's match against Lincolnton in Catawba.

Bandys' Marley Beegle, left, goes head-to-head with Lincolnton's Leah Tweed as players from both teams look on during Monday's contest in Catawba.