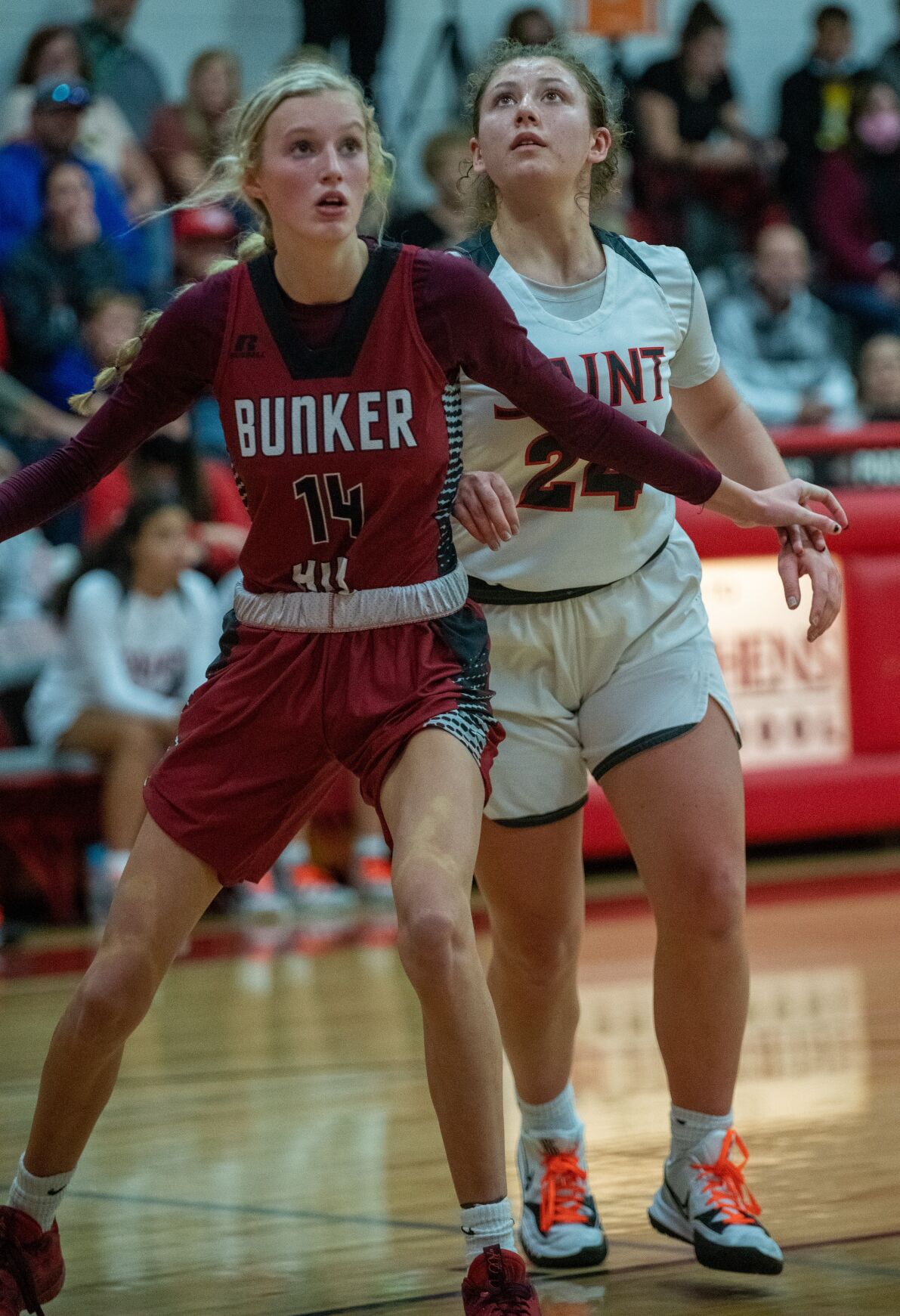 St. Stephens’ Allie Reid, 24, tries to maneuver around Bunker Hill’s Faith Isenhour, 14, for rebounding position during Tuesday’s game in Hickory. Reid led the Indians with 15 points in their 58-51 victory over the Bears. 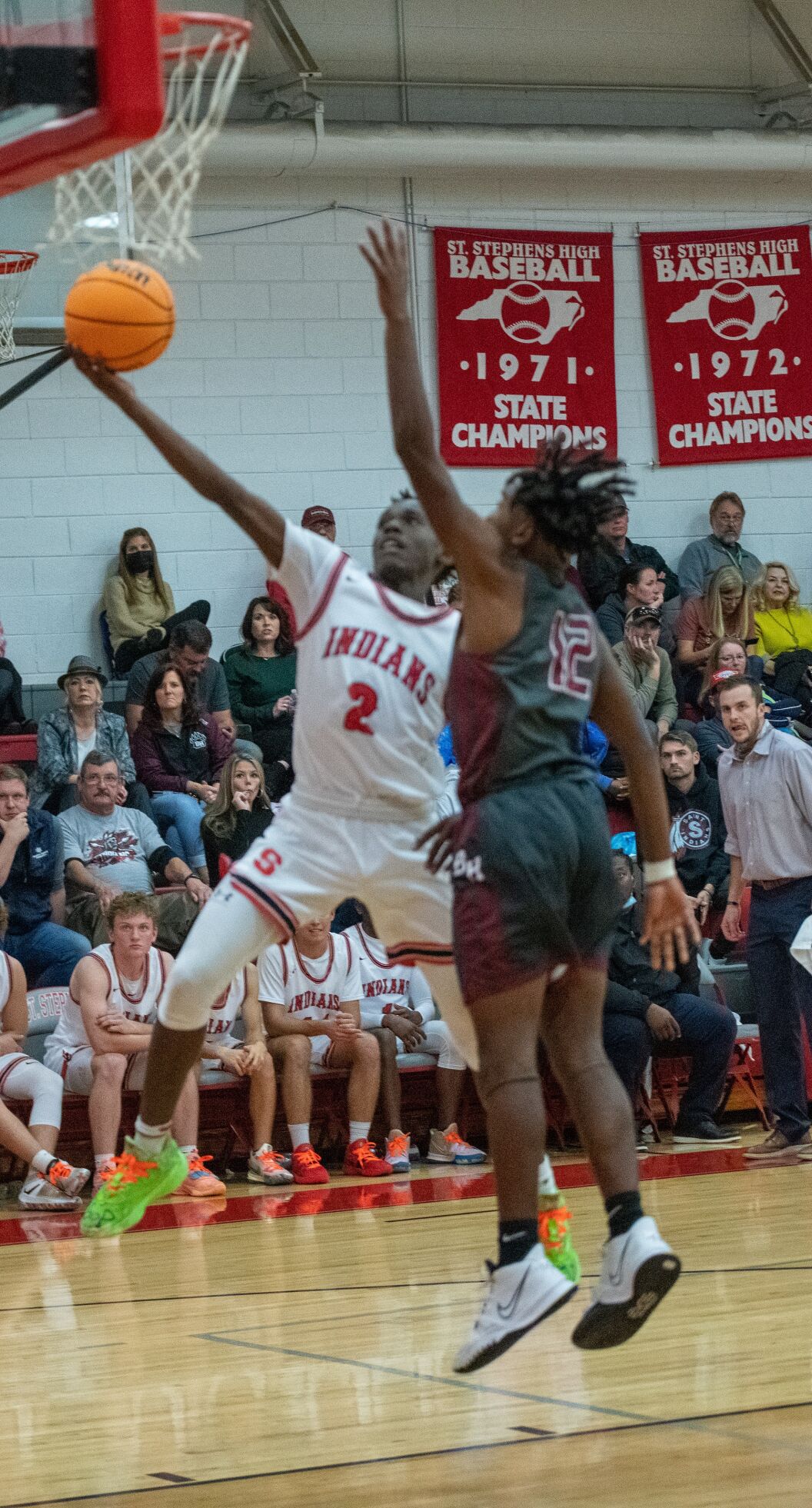 St. Stephens' Josh (Ji) Ikard, 2, drives past Bunker Hill's Elijah Boston, 12, for a layup during Tuesday's game in Hickory. Ikard led all scorers with 24 points in the Indians' 65-30 win over the Bears.

St. Stephens’ girls basketball team is off to a fast start after recording its second win in as many nights to open the campaign at 2-0. On Tuesday night the Indians used a pressure defense and ferocious rebounding to turn back a stubborn, albeit undermanned Bunker Hill squad by the score of 58-51.

“It’s a good start. We’re playing good the first couple of games. I’m pleased so far with how we’re competing,” said St. Stephens coach Andy Bennett. “We’re trying to build on what we had in the past. So far, it’s been good.”

For the Bears (0-1), Tuesday was opening night and they came into the game with a limited number on the roster and were further hampered by players trying to rehab some preseason injuries.

Bunker Hill coach Lee Swanson was upfront about his feelings regarding officiating. His squad was 12 of 21 from the free-throw line, but also found itself in early foul trouble. St. Stephens shot 21 of 33 from the charity stripe.

“I’m not going to pull punches. The game was not very well officiated,” said Swanson, who also admitted his squad dug a deep hole early and spent the remainder of the contest trying to climb out of it. “That’s not why we lost. I’m not going to make excuses. We’re young.”

St. Stephens never trailed the entire game and Bunker Hill managed just one tie score, 2-2, when Damireona Burch scored off the block. But Burch soon found herself in foul trouble and was relegated to the bench for a good portion of the night.

The Indians played a harassing man defense that forced turnovers, as well as induced the Bears’ into playing a little faster than they were comfortable on offense.

“At times I feel like we have the personnel that can do it,” Bennett said about his team applying man-to-man pressure. “But there are going to be times we can’t as well. We had an opportunity to maybe cause some problems today and put some pressure on them.”

Ella Pilkenton and Allie Reid worked the St. Stephens offense with Elizabeth Sumpter canning a 3-pointer in the opening quarter as the Indians built a 13-9 lead. But St. Stephens capitalized on the Bears’ personal foul woes as Burch picked up her third foul early in the second period and a couple of minutes later Olivia Ellis picked up her second.

With Kaylee McGlamery taking over the offensive load for the Indians in the second stanza, St. Stephens’ lead increased to 25-18 at halftime. Not only were the Bears struggling to get into an offensive rhythm, they were struggling even more on the boards.

St. Stephens threatened to blow the game open in the third quarter. The Indians began play after the break on a 7-0 run thanks to a pair of buckets by Reid and a three-point play by Lacey Scott. The hosts then went on an 11-0 run to lead 43-22 after a triple by Pilkenton.

Bunker Hill managed to shave off four points, all from the free-throw line, to trail 43-26 at quarter’s end.

It was the Bears’ turn to take over control of the pace of the game in the fourth quarter. They fed the ball inside to Burch at every opportunity. She responded with eight field goals for 16 of her game-high 23 points in the final period.

“I think she has 23 points and played maybe eight minutes. The game might have been a little different,” Swanson said about Burch. “She’s a good kid. Literally, her and Faith (Isenhour) haven’t practiced in a week. They’re beat up.”

Bunker Hill could not get closer than the final seven-point margin.

Bennett said rebounding is an emphasis for his club and it showed on Tuesday night.

“That’s always really important, no matter if its offense or defense,” Bennett said. “Getting extra possessions is making sure they don’t get extra possessions, and that’s the difference in a lot of games.”

Reid led the Indians’ offense with 15 points and Pilkenton added 13. McGlamery was also in double figures for St. Stephens with 10.

Backing up Burch’s big night for Bunker Hill were Isenhour and Ellis with 12 points each.

The Indians barely gave Bunker Hill a chance to shed their warm-up jerseys before blasting out of the gate. St. Stephens scored early and scored often, especially in the first half, on the way to a dominant 35-point win.

St. Stephens coach Patrick Smith was as complimentary of the raucous support the Indians received as he was of their performance.

“I think you saw the environment in here tonight, we can’t thank our fans enough. It was absolutely intense and a perfect environment for us,” Smith said, noting the first-night jitters from the night before were absent. “I kind of had a feeling today something was going to be a little different. My kids kind of had a little bit more ease to them, a little more comfort.”

The Indians certainly looked comfortable in the first quarter when they connected on five 3s on the way to a 25-3 lead after the opening stanza. Josh (Ji) Ikard had 12 first-quarter points and Dayton Anderson had 11.

“When those two guys are on, they’re pretty good scorers. Josh has always been that guy and Dayton’s got it in him,” Smith said. “The Ikard kid is just our heartbeat and our leader. He’s really done a lot for us this year.”

While things improved a little offensively for the Bears in the second quarter, the Indians barely let up and increased their advantage to 44-9 at the half. As impressive as St. Stephens was at the offensive end in the first 16 minutes, they were even more dominant on the defensive side of midcourt.

The Indians continued to torment the Bears from the 3-point line and hit three more triples in the third quarter. They finished the game with 10 treys.

“This is the best group of guys I’ve coached as far as listening,” Smith said. “I tell them to do something one time, and I don’t have to say it again.”

Quentin Hoover was the Bears’ leader on offense with 10 points and Devin Brice chipped in eight.

Ikard finished the night with 24 points for St. Stephens, while Anderson finished with 21.

Both schools’ boys and girls teams will be on the road next Tuesday. St. Stephens visits Bandys, while Bunker Hill travels to North Lincoln.

The Bears are also scheduled to play next Wednesday, when they open their home slate with a game against Alexander Central.

St. Stephens’ Allie Reid, 24, tries to maneuver around Bunker Hill’s Faith Isenhour, 14, for rebounding position during Tuesday’s game in Hickory. Reid led the Indians with 15 points in their 58-51 victory over the Bears.

St. Stephens' Josh (Ji) Ikard, 2, drives past Bunker Hill's Elijah Boston, 12, for a layup during Tuesday's game in Hickory. Ikard led all scorers with 24 points in the Indians' 65-30 win over the Bears.