SPEED KILLS: Maiden's passing game proves too much for Bandys in 21-7 win
1 comment
Share this
{{featured_button_text}}
1 of 2 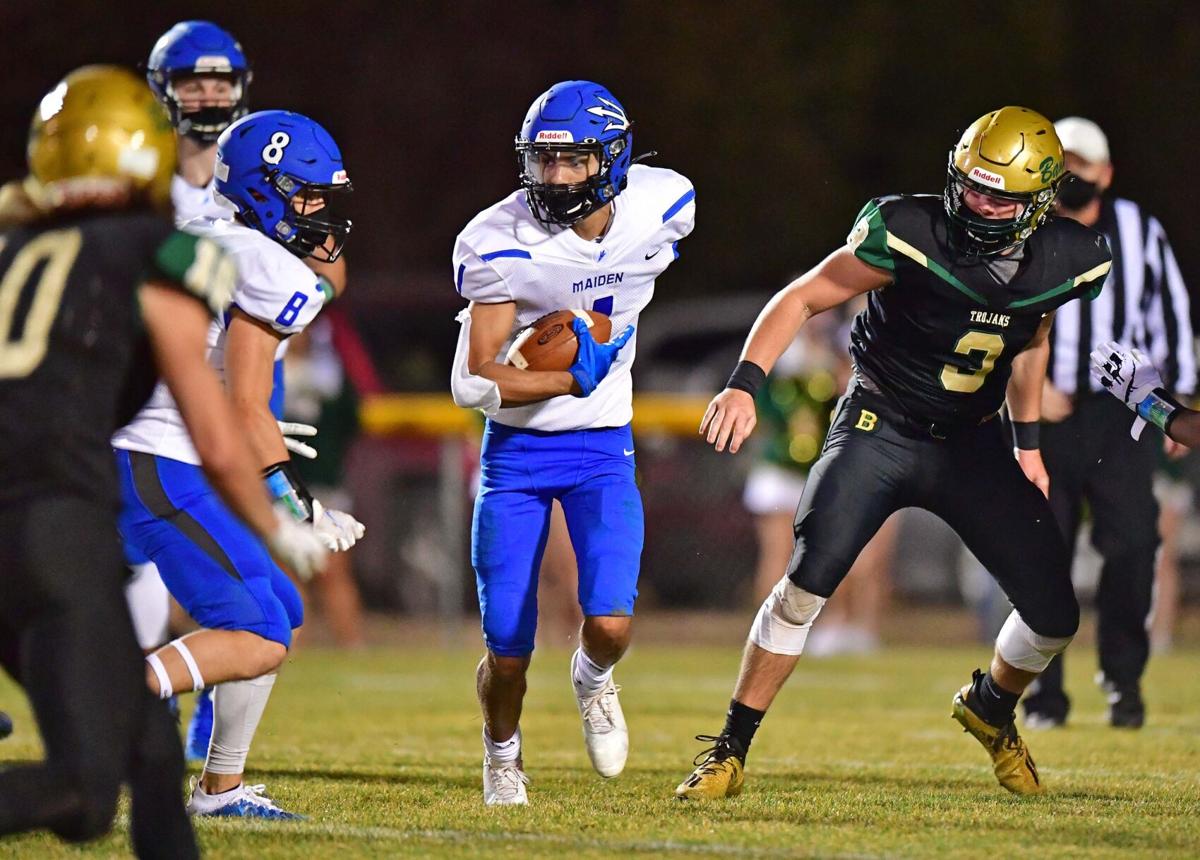 Maiden’s Brennan James (1) finds a hole in the Bandys defense early in the game Thursday night in Catawba. James caught seven passes for 157 yards and a touchdown in the Blue Devils’ 21-7 victory over the Trojans. 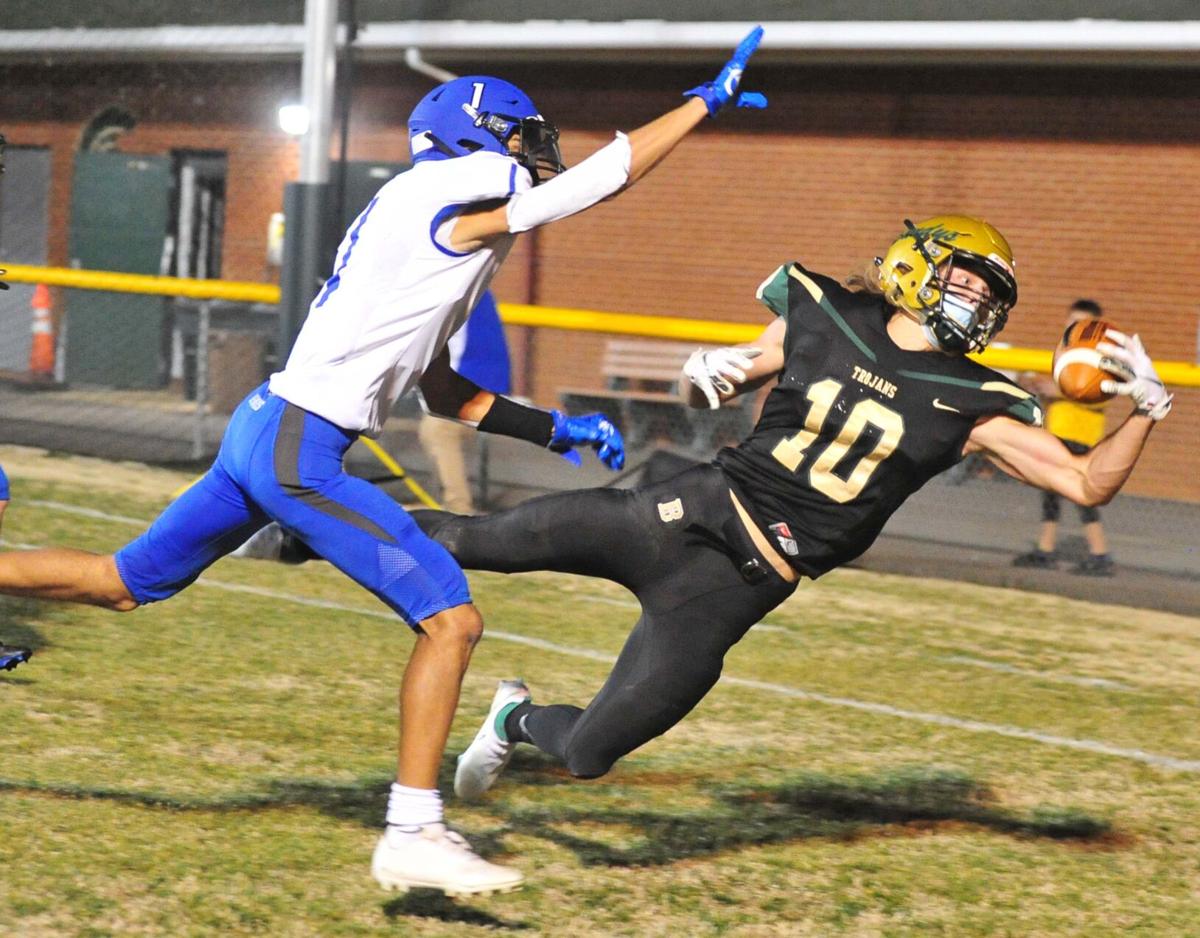 CATAWBA — A somber day for Maiden High’s football program was made sweeter Thursday night as the Blue Devils defeated archrival Bandys 21-7 in the long-awaited season opener for the 2020-21 academic year.

The win for the Blue Devils capped what was a tough day following the passing of legendary coach Tom Brown earlier in the day. Brown won 330 games over 35 seasons at Maiden with two state championships.

After the pregame meal prior to Thursday’s game, current coach Will Byrne spoke the players about Brown’s impact on the program.

Byrne then turned the focus on the current program. He added, “When we talk about us, what is our legacy. I think they handled it well.”

Part of the Brown legacy continued Thursday between the longtime rivals. The win continued the Blue Devils’ dominance over their current South Fork 2A Conference foes. Maiden has defeated Bandys the last two seasons, five of the last six times and holds a 51-14-4 record in the overall series.

Maiden’s passing game sputtered at times, but it still had enough to carve out yardage against the Trojans (0-1, 0-1 South Fork 2A Conference). Quarterback Ethan Rhodes finished the night with 18 completions out of 31 attempts for 303 yards. Much of the damage came in the first half, when he had 15 completions for 210 yards.

Rhodes’ passing yardage was aided greatly by his receiving corps, which together with the signal caller, used the pitch-and-catch routine to great effect. Brennan James was especially effective in the short passing game, as he turned seven catches into 157 yards.

“The first half, we were just trying to get it to them (the receivers) quick,” Byrnes explained. “They’re playing off. And, I get it, we’ve got some speed out there. At times, we executed and got some good runs and moved it.”

Byrne said his team had opportunities to do more, as several open receivers were missed downfield. However, he said part of the timing had to do with not getting onto the field enough due to wet conditions from recent rains.

“We haven’t worked on our passing game, because we’ve been inside so much,” said Byrnes. Even when it’s been sunny, our practice field is so wet. I think that plays into it a little bit.”

After missing on a long drive in the first quarter, the Blue Devils finally broke open the scoring at the end of a 10-play, 64-yard drive. The key moment came on third-and-23 when Rhodes scrambled out of trouble on a pass play. His elusion of the rush bought time for James to break from near the right sideline for a 35-yard pass play and a first down at the Trojans’ 32-yard line. An unsportsmanlike penalty backed up Maiden 15 yards, but pass plays to James — an 18-yard catch-and-run — and Chris Culliver set up a quick slant to Jacob Sigmon for a 12-yard touchdown. The extra point attempt was mishandled, which left Maiden up 6-0 with 9:05 left in the first half.

Bandys finally got its initial first down of the game midway through the second quarter. The Trojans drove to the Blue Devils’ 5 before turning the ball over on downs.

However, Bandys got a gift when the Trojans recovered James’ fumble at the Blue Devils’ 27. Again, the Trojans drove deep and faced a fourth-and-goal before Parker DeHart lofted a pass to the back right corner of the end zone, where Parker Styborski made a diving, outstretched catch for a 5-yard score. Neftaly Rivera’s kick put Bandys up 7-6.

Bandys was playing for the first time under new head coach Jason Barnes, who slid into the position from his defensive coordinator position after Tom Eanes left for Pender County.

While Barnes was happy with the team’s effort, mistakes proved to be costly for the Trojans. He said it was especially tough to face their biggest rival without having a chance to work out kinks in nonconference play.

“Usually, you get two or three games in nonconference to tune up those, before you go into a game like Maiden,” said Barnes. “This particular situation kind of had its ups and downs ... We had so many things, like special teams, that we’re not doing great on right now. We’ve got to fix that, but I feel like we’ve got room to grow.”

A special teams play turned the momentum of the game early in the third quarter. Bandys went three-and-out on the first possession and set up to punt from its 16. The punter Styborski took the snap, rolled right and attempted a pass for a first down, which Maiden’s defenders read and broke up. With a short field, Maiden needed only five plays to score with Rhodes bullying in from the 2 for the score. James ran an end around for the 2-point conversion.

“The way the play is set up,” Barnes explained, “it’s designed to where if we do want to fake it, we can call it. The kid kind of called his own number there. For a second, when he got the ball, he wanted to make something happen.”

Another short possession. followed by a short punt, set up the Blue Devils near midfield. On the third play, James sprinted free on a post pattern and caught Rhodes’ pass for a 42-yard scoring play. Carson Foard’s kick accounted for the final margin.

Bandys’ ensuing drive offered a last chance to stay in the game and the Trojans ran 13 plays to get to the Blue Devils’ 12. However, three straight incompletions turned the ball over to Maiden with 10:59 left. The Trojans’ final thee drives ended with a fourth-down incompletion near midfield and two late interceptions.

St. Stephens and Hickory ended the 2020-21 football season by writing the latest chapter in their crosstown rivalry. Both teams entered the se…

TAYLORSVILLE — During Friday night’s regular season finale, the Alexander Central football team did what it does best. The Cougars ran. And ra…

The Bunker Hill football team finished the regular season with its sixth straight victory on the road Friday in Lenoir, defeating West Caldwel…

Maiden High School will host Salisbury Friday night at 7 o’clock in the first round of the state football playoffs.

It’s another busy week across the region in high school sports.

WNNC Radio, a Newton-based station, has been presenting awards to high school football players in Catawba County each week for 39 years. Earli…

Maiden’s Brennan James (1) finds a hole in the Bandys defense early in the game Thursday night in Catawba. James caught seven passes for 157 yards and a touchdown in the Blue Devils’ 21-7 victory over the Trojans.