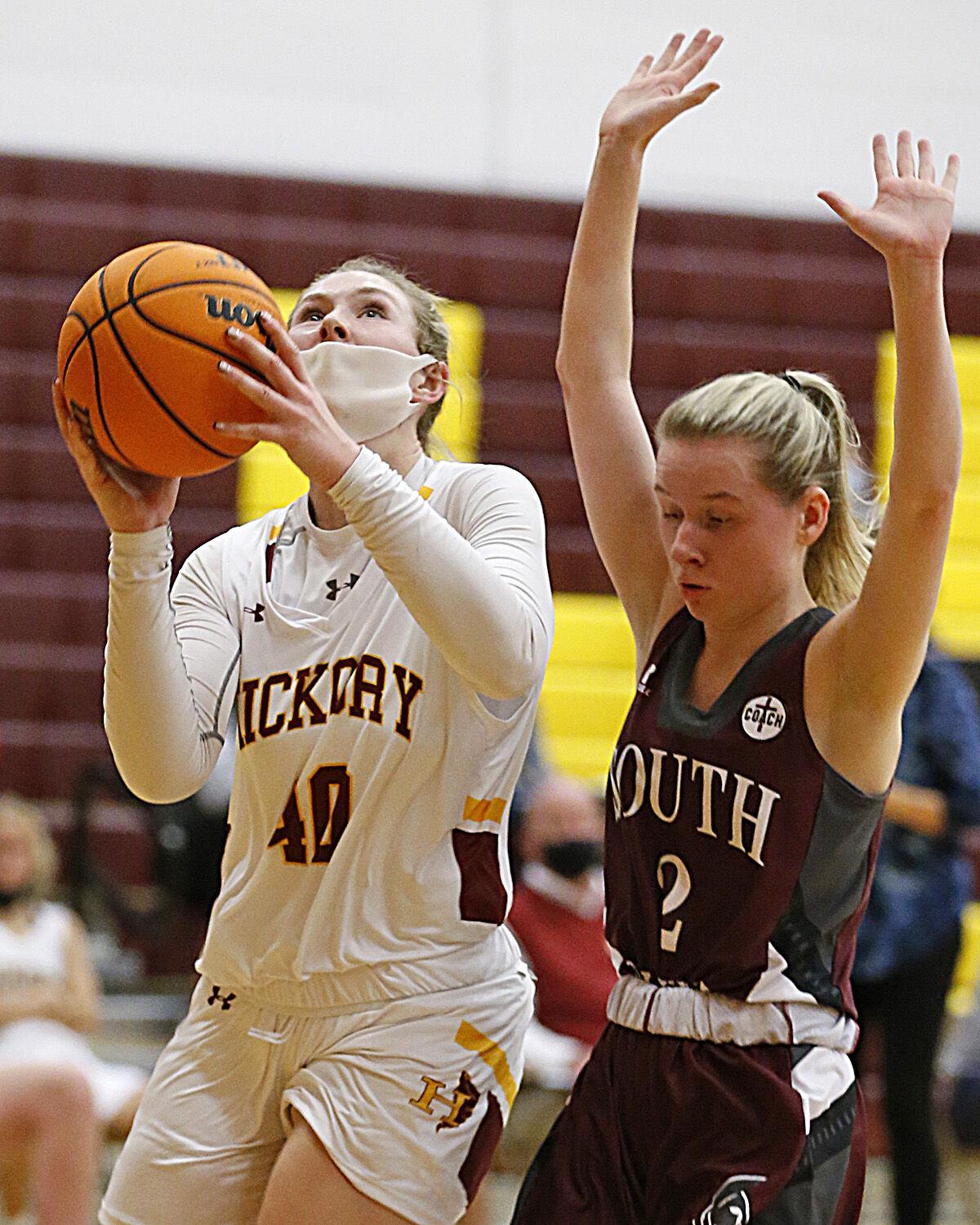 Hickory’s Finley Lefevers, 40, drives to the basket past South Caldwell’s Kaitlyn Propst, 2, during a game earlier this season. 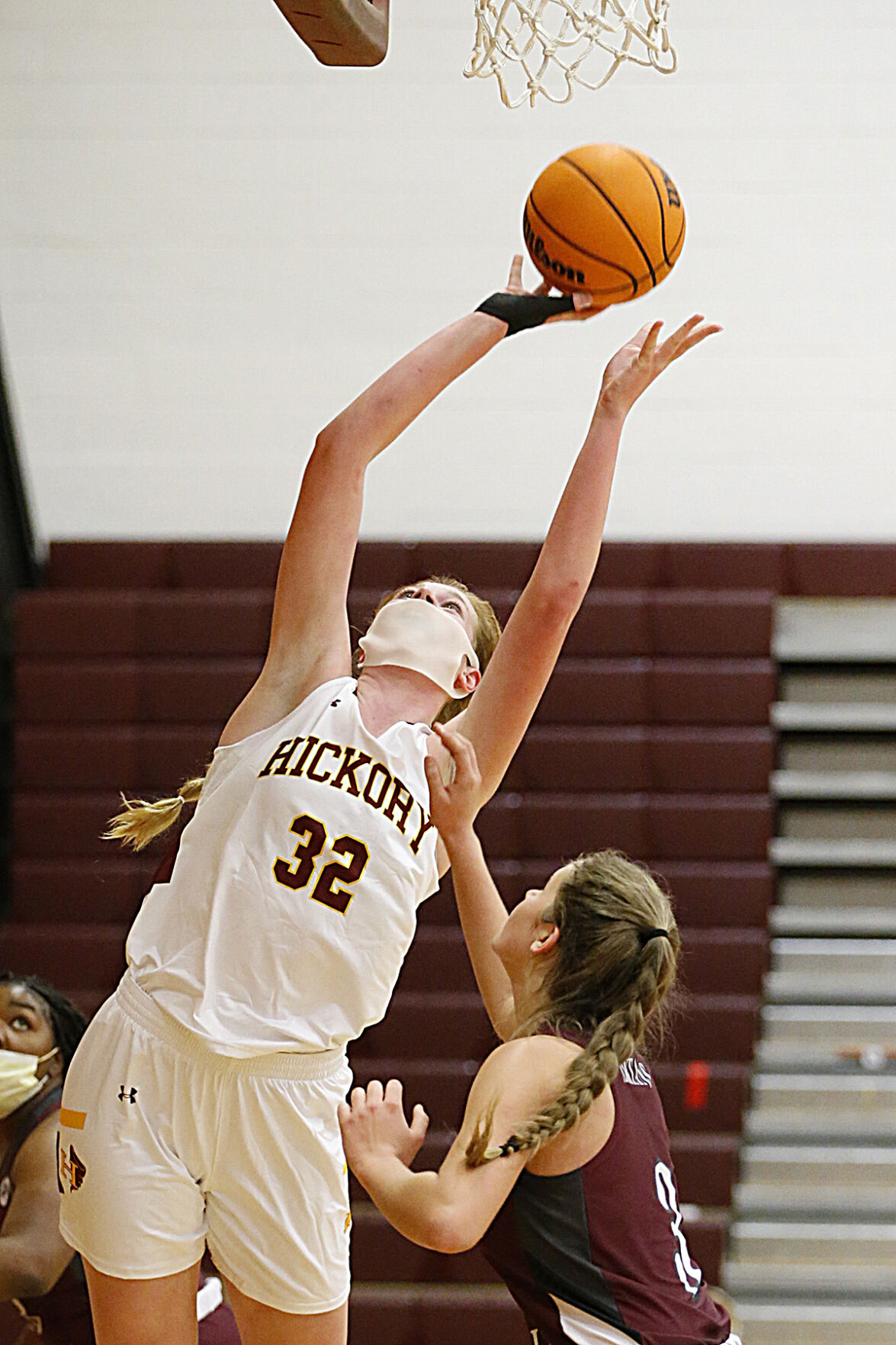 Hickory’s Kellen Morin, 32, gets a shot in close over South Caldwell’s Olivia Miller, 3, during a game from earlier this season. 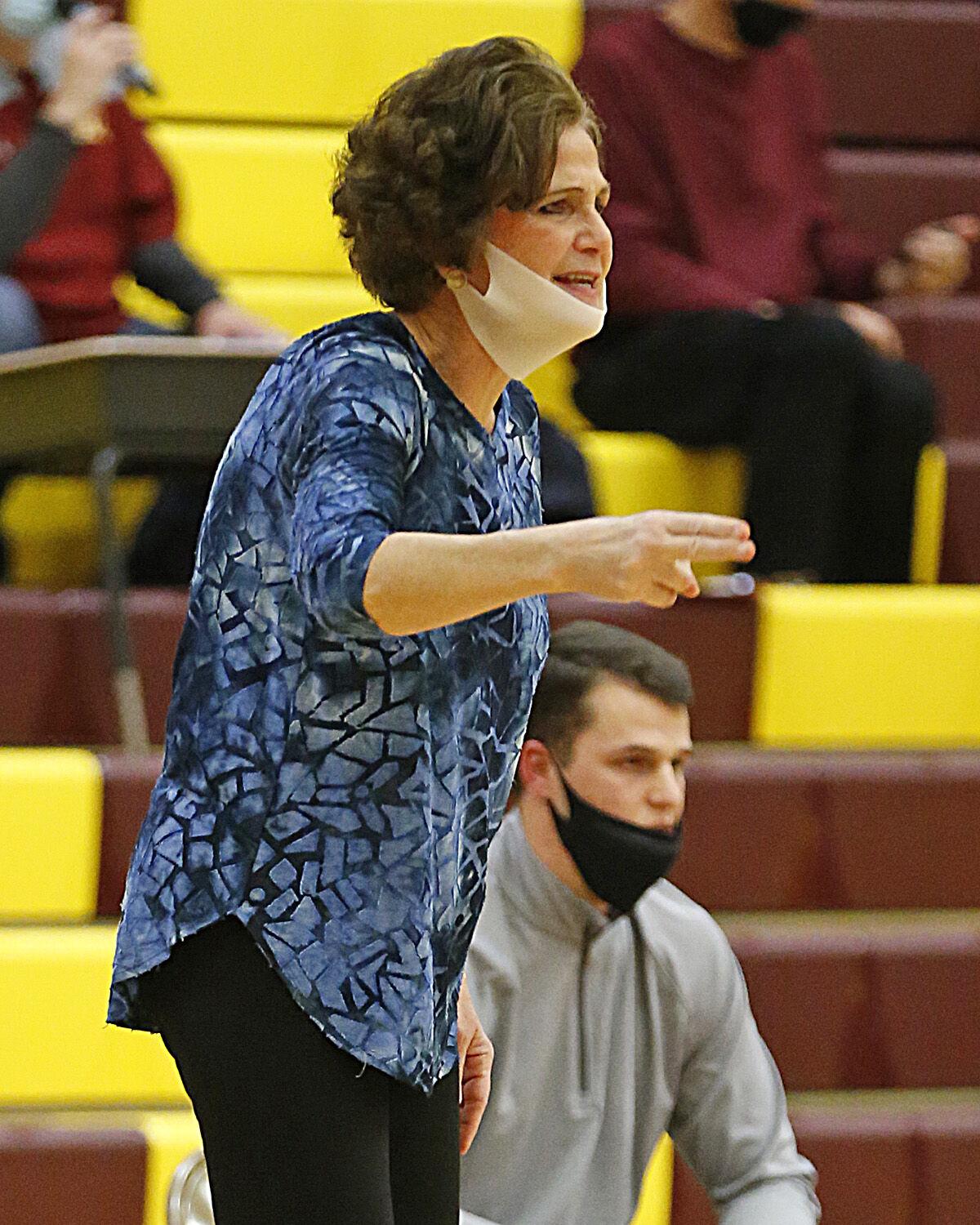 While no team would wish to play through a high school basketball season during a pandemic, Hickory’s girls have not only survived the rigors of the last eight weeks, but they have also thrived. Now, the Red Tornadoes (11-2) are a game away from playing in the 3A state final.

On Tuesday, 12th-seeded Hickory will travel to China Grove to take on No. 3 Jesse Carson High (17-0) in the North Carolina High School Athletic Association’s 3A West Region final. The winner will take on the 3A East final victor between No. 5 Northwood (14-0) and No. 7 Asheboro (14-0) in the state championship game this Saturday. The state final will be played at either Wheatmore High in Trinity or Providence Grove High in Climax. The NCHSAA will determine the times and sites of the final after Tuesday’s regionals are played around the state.

Serendipitously, with Hickory starting five all being seniors, the group may have been in the best situation to handle the craziness of having their season shut down twice. While head coach Barbara Helms worried about how the players would be affected physically, as well as maintaining continuity with the stops and starts and the limited practice time, she said that the seniors already knew her expectations of them.

“If you’re going to be out,” explained Helms, “The fact that they knew some of the stuff that we do, or at least have a good concept of it, in terms of expectations and the things they could do for us, or things that, over the years, that they could improve upon, I think that has to help. I don’t see how it couldn’t.”

The group has grown up together over their four seasons, though they’ve had different experiences on the journey. Three of the five seniors — Finley Lefevers, Chloe James and Ellie Rumbaugh — were on the roster as freshmen. Kellen Morin made the varsity as a sophomore and Aysha Short transferred to Hickory from Freedom as a junior. All of them play other sports with the Red Tornadoes. Lefevers, James and Short do volleyball, Short was on the girls’ soccer team last spring and Rumbaugh is currently playing lacrosse for Hickory. Given their multi-dimensional gifts as athletes, Helms has been impressed with their ability to come together on the basketball court.

“It’s kind of an interesting group, because they’ve grown together and it’s been a journey for these seniors,” Helms said. “A lot of them are multi-talented athletes that come together on the basketball court … Even though they’ve always played basketball, they still have other things, too, that they work on. It’s nice to see that they can put their focus together at the right time and really enjoy something like that.”

On the basketball court, Lefevers — a basketball signee with Queens University in Charlotte — has the ability to do about anything on the court. At 6-foot, not only can she play the low post, but also step out and knock down long-range jumpers. A skilled ballhandler, Helms also uses her on occasion to handle point guard — a rare thing for a 6-footer in high school basketball.

“She certainly has such a broad spectrum of talent,” said Helms, who later added. “She has worked so hard to make herself that. She not only has the skills, but she works for it.”

At 6-foot-4, Morin — who has signed to play volleyball at Virginia Tech — is an aggressive, spirited player that has learned to play more under control. As Helms described, “she’s making much better senior decisions.” With her size and agile athletic ability, Helms said she has the ability to affect the flow of the game around the basket, something that is not always seen in the high school game, or even with someone of her height.

“You just don’t see many players like that,” said Helms. “Even tall players aren’t necessarily great rim protectors, but she is. And she likes it and has such great enthusiasm.”

Along with Lefevers, Hickory has four skilled ballhandlers, essentially four guards that, as needed, can navigate the play with the basketball and keep the offense moving. Helms said that Short has especially been an impact player for the Red Tornadoes since coming over from Freedom.

“She can really open up the court for threes,” said Helms. “And she’s a very talented ballhandler as well. One of the best in terms of being in traffic and getting the ball where it needs to be.”

Helms describes James as a tremendous athlete with acceleration and speed. But where she has excelled is in making good decisions on the court.

“I think that’s probably the biggest thing really has helped us to this point,” said Helms. “And that is making everybody much better, because she is hard to contain … Her defense has always been tough, because she’s so athletic, and that can unnerve you.”

Rumbaugh has recovered from two ACL injuries to become an essential role player of the team.

“She’s not real big,” said Helms. “But she’ll get underneath you. She’ll defend; she’s got great fundamentals … She’s able do some of our hardest defensive tasks. She’s always been a good person to set things up and make everybody else around her get to where they need to be.”

Hickory is playing in its first regional final since 2015, which at the time was the fourth regional in five seasons, Overall, the Red Tornadoes have won seven West titles, three under coach Helms. Hickory snapped a 13-game losing streak to Freedom to advance to Tuesday’s final. The Red Tornadoes have allowed 40 or fewer points in seven of the 13 games this season. In holding Freedom to 41 points, it was the lowest amount scored by the Patriots since March 2019, when they scored 37 in a 3A West final loss to Cuthbertson.

Jesse Carson (17-0, 1st in the North Piedmont 3A Conference)

Coach Stouder has been the program’s only coach since the school opened in 2006. Playing in their first regional final, the Cougars reached it by defeating Enka on Saturday and avenging a playoff loss to the Sugar Jets in 2020. Although Jesse Carson has scored 60 or more points in 13 of its 17 games, it’s a balanced attack with no player averaging more than 15 points per game. A pair of senior twins lead the way for the Cougars. Colbie Perry puts in 14.8 points per game to lead the scoring, while Carleigh Perry leads the rebounding at 7.9 per game. Mary Spry (12.6) and Ellie Wilhelm (10.9) are the only other players averaging double-digits in scoring.

When the Knights won 16 games during the regular season last year, not only was it a school record, it matched the combined number of wins from the previous two seasons. Fast forward to this season: the Knights are playing in their first regional final and they routed the defending state 2A co-champions from Shelby to do it. Senior point guard Cole Seagle (avg. 22.9 ppg) has been afire during the playoffs. He started with a 35-point night against Forbush, then added 26 against North Davidson two days later before settling for 17 in the rout of Shelby. Jack Carter (18.1 ppg) has scored more than 20 in each of the three playoff games. Daniel Carter leads the team in rebounding (8.5 rpg).

Hendersonvile (16-0, 1st in the Mountain Six 2A Conference)

Similar to North Lincoln’s story, the Bearcats won 20 games in 2017-18, which matched their combined win total from the previous two seasons. Hendersonville reached its first regional round since 2013. A win on Tuesday would put the Bearcats in their first state final since 1992. Hendersonville has two players that average over 20 points per game. The Bearcats are led by Keenan Wilkins (23.3 ppg) and Dwight Canady (21.5 ppg). Alex Lemmens leads the rebounding at 7.5 per game.

St. Stephens and Hickory ended the 2020-21 football season by writing the latest chapter in their crosstown rivalry. Both teams entered the se…

After eight seasons at St. Stephens High, Wayne Hicks has notified the school’s administration that he is stepping down as the Indians’ head f…

TAYLORSVILLE — During Friday night’s regular season finale, the Alexander Central football team did what it does best. The Cougars ran. And ra…

The Bunker Hill football team finished the regular season with its sixth straight victory on the road Friday in Lenoir, defeating West Caldwel…

Maiden High School will host Salisbury Friday night at 7 o’clock in the first round of the state football playoffs.

It’s another busy week across the region in high school sports.

Hickory’s Finley Lefevers, 40, drives to the basket past South Caldwell’s Kaitlyn Propst, 2, during a game earlier this season.

Hickory’s Kellen Morin, 32, gets a shot in close over South Caldwell’s Olivia Miller, 3, during a game from earlier this season.