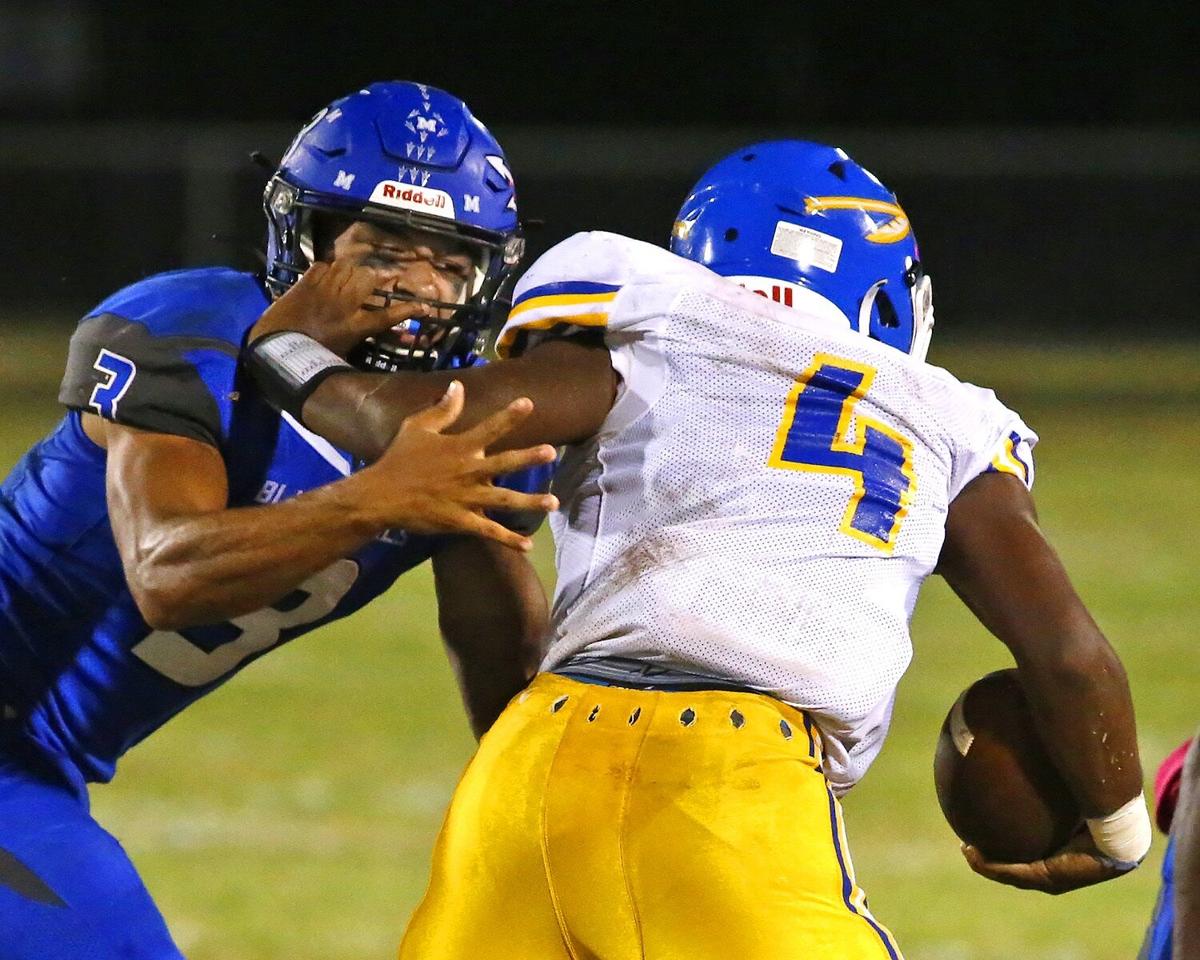 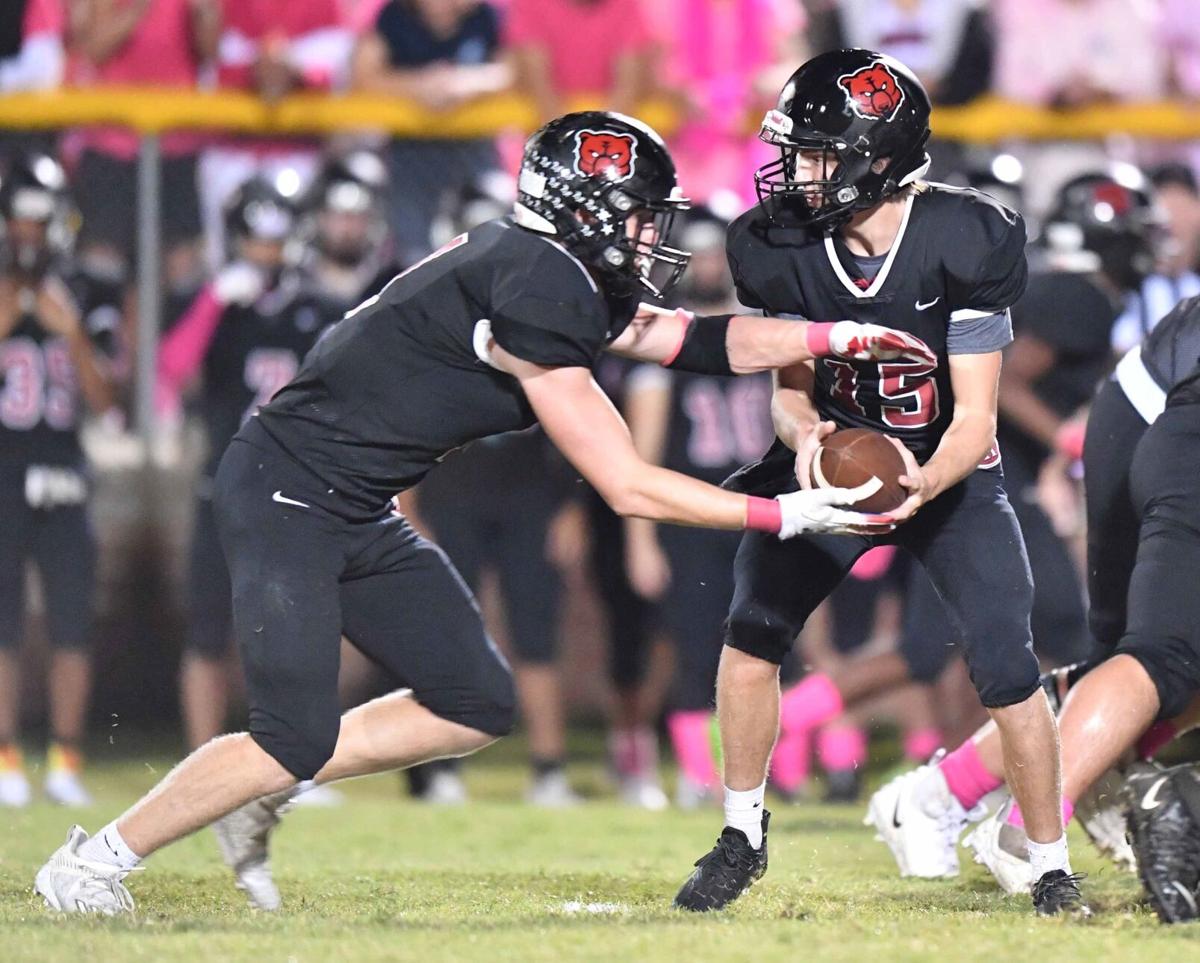 Bunker Hill's Redek Robinson, 15, hands the ball off to Justin Killian, 1, in a file photo from last Friday's game against West Lincoln.

Special ceremonies will be held during the aforementioned games in Maiden and Hickory (more details on those below), while eight other contests involving area squads are also on tap for Week 8. Here’s a look at all 10 games:

The Blue Devils are one win away from a potential showdown with the only other unbeaten team in the area — Bunker Hill is also 6-0 heading into tonight’s road game at East Burke, and is scheduled to host Maiden next Friday — but the Trojans would love nothing more than to spoil their plans and get back in the win column for the first time since a 49-6 road win over Fred T. Foard on Aug. 27. Bandys has only played twice since then, while Maiden takes the field tonight for the fourth time in 15 days.

Bandys led 7-0 at halftime last Friday before allowing host Lincolnton to rally for a 27-7 win, with the Trojans’ only score coming on a 27-yard touchdown pass from senior quarterback Parker DeHart to sophomore running back Elliot Spicer. Meanwhile, Maiden topped West Caldwell 49-6 at home last Saturday for its third victory of 40-plus points this season behind another sensational performance from senior QB Ethan Rhodes, who has completed 27 of 31 (87.1%) passes over the past three games for 560 yards, nine touchdowns and no interceptions.

Maiden will honor members of its 1971 Western North Carolina championship football team at halftime of tonight’s contest (the 2A classification only held regional championships from 1961-71), while a meet-and-greet with team members will begin a 6 p.m. The Blue Devils will also honor the memory of former head coach Tom Brown, who died earlier this year.

The Bears and Cavaliers are no strangers to one another, having faced off each of the last four seasons as members of the Northwestern Foothills 2A Conference. Bunker Hill won all four meetings, outscoring East Burke by a combined total of 154-67 and winning all but one matchup — a 26-21 home victory in 2018 — by double digits.

That includes this fall’s 6-0 start, Bunker Hill’s best start since winning the first six games of the 1976 season. Nevertheless, the Bears are coming off their closest game of the season, a 15-7 home win over a West Lincoln squad that took Maiden to overtime last month, while East Burke suffered a last-second loss to Newton-Conover last Saturday to run its losing streak to three games.

Speaking of the Rebels, they visit the Red Devils tonight after suffering one-score losses at the hands of Maiden and Bunker Hill over the previous two weeks. In fact, each of West Lincoln’s past four games has been decided by eight points or less, and five of six contests overall.

Newton-Conover has also suffered a pair of close losses this season, falling 16-13 to South Caldwell on Sept. 10 and 21-17 to Lincolnton on Sept. 24. Both of those games were played at home, so the Red Devils return to Gurley Stadium tonight looking for their first victory there since defeating Bandys 32-14 in their home opener this past spring.

West Lincoln knocked off Newton-Conover 27-19 in Lincolnton last season, while the Red Devils won 37-34 at home in 2019. The teams have alternated victories in each of their past six meetings dating back to 2015.

It looked like the Warriors might be turning the corner this past spring, when they went 3-4 after finishing 0-11 in 2018 and 1-10 in 2019. But they have struggled this fall, losing all five games by double digits and scoring more than seven points just once.

Then again, West Caldwell’s losses have come at the hands of South Caldwell, Hibriten, Newton-Conover, Bunker Hill and Maiden, teams that enter Week 8 with a combined record of 21-6. So perhaps more wins are in the future for the Warriors, who host a Wolves team tonight that is 2-9 on the road since the beginning of the 2019 season.

Conversely, three of West Caldwell’s four wins since the start of the 2018 campaign have come at home. And tonight’s contest will be the Warriors’ first home game since a 37-6 loss to Newton-Conover on Sept. 17, which was followed by blowout defeats at Bunker Hill and Maiden.

Not only is it homecoming night for the Red Tornadoes, but Hickory is also set to name its football field after former football and girls basketball head coach David Elder during a pregame ceremony. Members of Hickory’s 1996 state championship football team will also be recognized as part of a 25th anniversary celebration.

During the game, the Red Tornadoes will do battle with a Raiders squad that has won two of its past three games after dropping 25 in a row beginning in 2018. Hickory and North Iredell are currently tied with North Lincoln for second place in the conference, one game behind Statesville (5-0 overall, 3-0 in league play).

Hickory routed crosstown rival St. Stephens 43-15 on the road last Friday and also owns league victories over Draughn and East Lincoln, while North Iredell suffered a 50-0 home defeat at the hands of North Lincoln in Week 7. The Raiders’ conference wins came against Fred T. Foard and St. Stephens in Weeks 5 and 6, respectively.

The Indians have yet to taste victory at home this season, and they are 1-1 on the road. In its last road contest on Sept. 17, St. Stephens shut out West Iredell 21-0 for its first win under first-year head coach Kyle Lowman, but the Knights will provide a much stiffer test.

North Lincoln’s only losses thus far were to nonconference West Lincoln by a 14-7 final in Week 1 and to league-leading Statesville by a 14-5 score three weeks ago, but both of those defeats came on the road. The Knights are 2-0 at home, where they are averaging 37.5 points per game this fall.

North Lincoln has already gobbled up nearly 1,600 yards on the ground, led by junior RB Brennen Rogers’ 582 yards and eight touchdowns on 81 carries and senior QB Kyle Kovalchuk’s 465 yards and seven scores on 79 carries. The Knights figure to present problems for a St. Stephens side that has been outscored 144-49 through the first five games of the season.

It hasn’t been smooth sailing for the Mustangs this fall, but they seem to have righted the ship with a 45-0 road victory over West Iredell last week, snapping a two-game losing streak in the process. West Iredell’s only win was a 16-8 road triumph over Foard on Sept. 24, so East Lincoln appears primed to make it back-to-back wins tonight.

Games aren’t won on paper, but the Tigers have allowed 211 points while only scoring 14. They have been shut out on three occasions, whereas East Lincoln has scored at least 14 points in all but one contest — a 23-6 home loss to Statesville two weeks ago.

Freshman QB Hunter Bolling has received the bulk of the snaps for the Mustangs under center in recent weeks following an injury to junior Tyler Mizzell in Week 3, completing 35 of 55 passes for 307 yards and four TDs. On the ground, East Lincoln is averaging 4.4 yards per carry, receiving 713 yards and 10 scores from its rushing attack.

Although Freedom has won the last seven meetings between the teams, South Caldwell already owns a victory over the aforementioned Hibriten team that defeated the Patriots last Friday. It took two overtimes, but the Spartans outlasted their Caldwell County rivals 44-42 on the road three weeks ago.

South Caldwell hasn’t played in front of its home crowd since defeating the Hickory Hawks 20-12 on Sept. 3, and this will be the Spartans’ final home game until the season finale against Hibriten (the first meeting between the league foes was a nonconference contest). On the other side, Freedom hits the road for the first time since a 13-12 win over East Burke in Week 2, which marked the Patriots’ season opener.

Since losing back-to-back games at the hands of Maiden and Mitchell in Weeks 2 and 3, the Pioneers have reeled off three consecutive wins. Following a 28-20 home victory over Burns on Sept. 10, Watauga defeated Ashe County 54-7 on the road on Sept. 17 and South Caldwell by a 34-point final margin during last week’s home contest.

In every game except the 47-0 road loss to the Blue Devils, Watauga has scored at least 23 points. Additionally, that game notwithstanding, the Pioneers have only allowed 16.6 points per game while winning four of their other five contests.

Alexander Central has alternated wins and losses over the past four games, most recently winning 42-36 over visiting Ashe County in an overtime thriller last week. Prior to that, the Cougars played a tough nonconference slate that should have prepared them well for a difficult league schedule.

The Panthers seem to have found their footing in recent weeks, as they enter tonight’s trip to West Jefferson having defeated SouthLake Christian Academy and Freedom by a combined total of 84-33 since losing to South Caldwell in double overtime on Sept. 17. Hibriten hasn’t lost a conference game since falling 22-20 at home against Patton on Oct. 30, 2015, during the Panthers’ previous stint in the Northwestern 3A/4A, winning its last 34 in a row.

In order to beat the Huskies, Hibriten will have to slow down a passing attack that has accounted for 1,277 yards and 12 TDs so far. Junior QB Wesley Thompson is responsible for most of that production, hooking up with nine different receivers including top target Colin Estes, a junior wide receiver with 372 yards and four scores on 25 catches.

Hibriten is 2-0 on the road this season, winning last week at Freedom and defeating crosstown rival West Caldwell 39-25 last month. In fact, the Panthers haven’t lost a road contest since 2015, when they finished 5-3 away from home.

NFL Week 6 Market: Will weather be a factor?

ICARD — The Bunker Hill football team made sure East Burke had an unhappy homecoming on Monday, defeating the Cavaliers 31-8 to remain perfect…

CLAREMONT — Friday was the sort of night that has come rarely to Bunker Hill High. An overflow crowd that spilled from the stands with fans co…

The Bunker Hill and Maiden football teams have likely had today’s date circled for quite some time. After not playing this past spring due to …

A NIGHT TO REMEMBER: Hickory shuts out North Iredell on homecoming, improves to 4-3

It was a memorable night for the Hickory football team on Monday.

CATAWBA — Had a few plays gone differently here and there, the Newton-Conover football team might be contending for the Catawba Valley 2A Conf…

CATAWBA — A high school football game that was originally scheduled to be played on Friday at 7:30 p.m. before being moved to Saturday at 7 p.…

There’s so much to write about this week with top-notch contests with conference title implications in football and boys soccer. Volleyball te…

Bunker Hill's Redek Robinson, 15, hands the ball off to Justin Killian, 1, in a file photo from last Friday's game against West Lincoln.