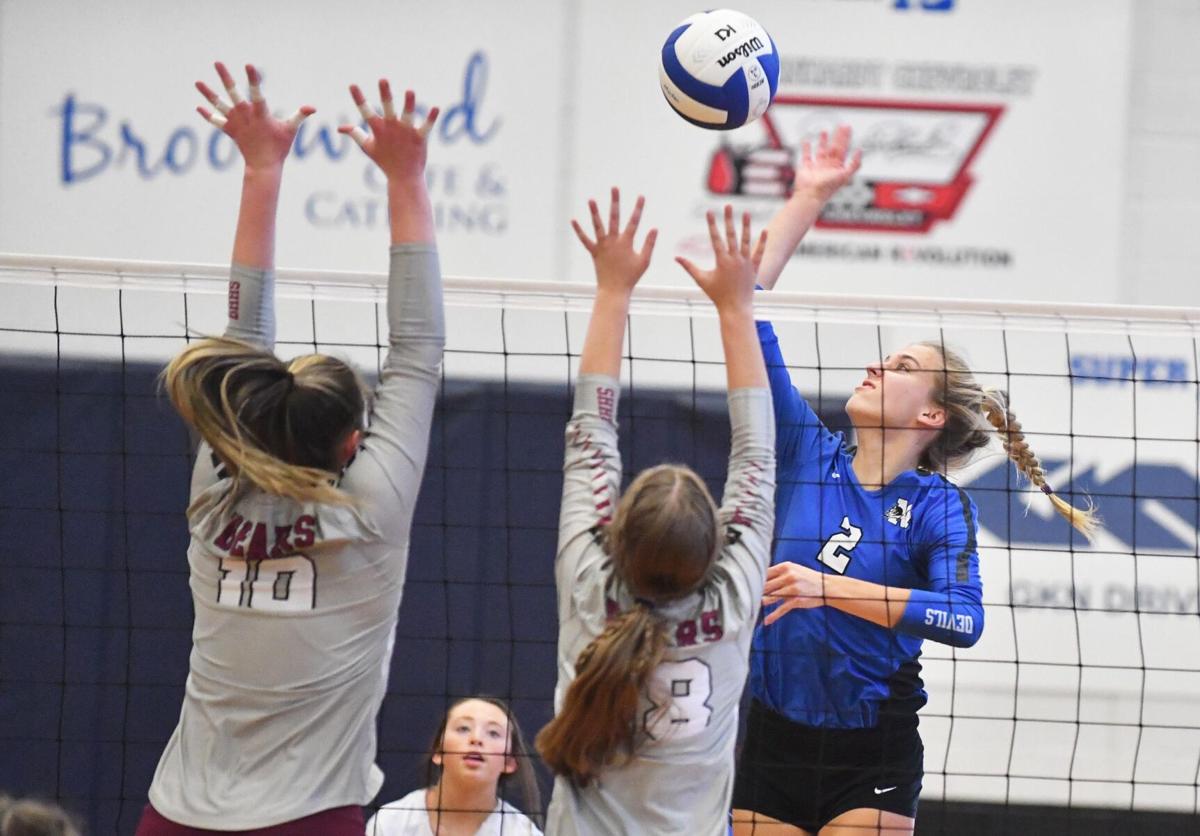 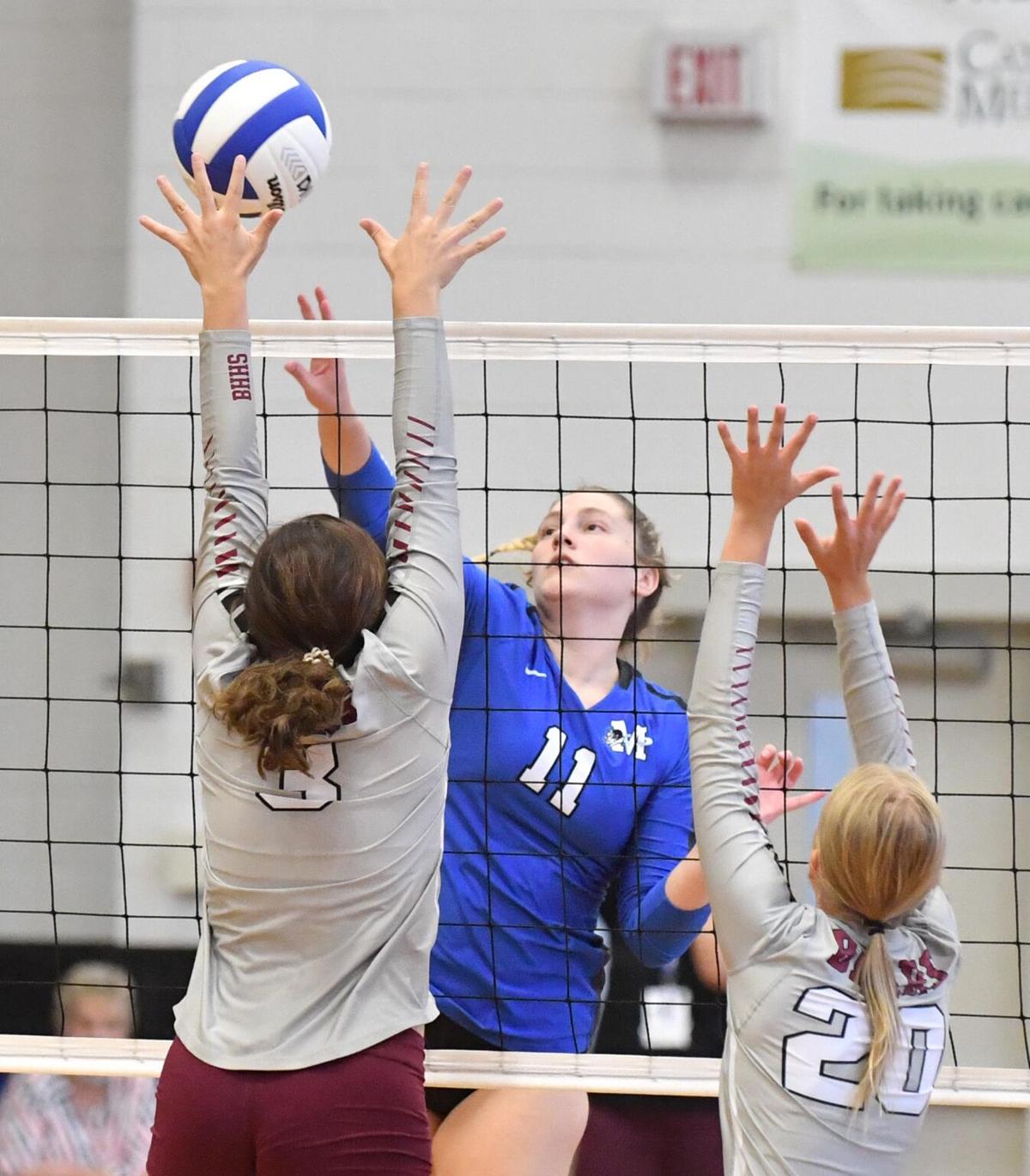 Maiden’s Grace Kilby, 11, goes up for the volley while Bunker Hill’s Caley Powell, 3, and Caitlin Robison, 20, try to defend.

MAIDEN — After a tough start to the season, Maiden High’s volleyball team is on a roll.

The Blue Devils routed Bunker Hill over the first two sets and then outlasted the Bears to complete a 3-0 sweep Tuesday evening in a Catawba Valley Athletic 2A Conference match. Maiden won by set scores of 25-10, 25-15 and 25-22.

After starting the season 0-7, Maiden (5-7) has now won five straight and remains in a tie with Bandys atop the Catawba Valley 2A at 4-0. Meanwhile, Bunker Hill is currently 4-5 overall and 3-2 in league play.

The Blue Devils’ seven-game nonconference slate to open the season was a tough gauntlet to maneuver, as they had matches against back-to-back 2A state champions Fred T. Foard, as well as last season’s playoff teams Lincoln Charter, South Iredell, Davie County and East Lincoln, the latter of which represented Maiden's main rival the past four seasons in the South Fork 2A Conference. Currently, the combined win-loss record of the teams that have defeated Maiden is 42-19.

While the competition was tough for Maiden, head coach Marsha Davis said it prepared her team for the current conference battles.

“I think it helped us a lot,” explained Davis. “Because we did play very tough teams. We didn’t really get killed by any of those teams and we were in the ballgame. Actually, there were a few that we should have pushed through, but I think it made them grow and realize what we have to do to play as a team.”

Maiden had little problem putting away the first two sets quickly. In the first set, Ilysa Barr found a groove from the left side of the net, pounding kills to the middle back on the Bears' side of the court. Barr put down five kills to help build a 12-5 lead. From there, seven of the next eight points for the Blue Devils came on Bunker Hill errors. Eventually, Savannah Lail closed out the set with three kills and an ace.

Barr started the second set with a block and a couple of kills to get Maiden off to a 4-0 start. Then the attack shifted to the right side with Grace Kilby. The senior hitter put down four kills and a block during a 12-2 run that put Maiden up 16-6.

After a timeout, Bunker Hill was the recipient of several errors by the Blue Devils. When Allie Sigmon put down a block, the Bears' deficit was cut to 16-13. However, Callie Stamey found a kill in the middle and Barr returned to the front line for a pair of points as the Blue Devils pulled away.

“(Barr) played probably the best game she’s played in a while,” said Davis. “She likes those tight sets and they were able to give it to her.”

The Bears finally got uncorked in the third set, as Caitlin Robison sandwiched a block and a kill around a slam by Sigmon to run out to a 5-0 lead. Maiden retook the lead as four different players scored to lead a 6-0 spurt. After the Blue Devils built a 12-9 lead, Sigmon took control of the net with three kills to highlight a 6-3 run that tied the set at 15-all.

“Allie is phenomenal,” said Bears coach Kelsey Dettman of Sigmon’s play. “She does a great job for us defensively and offensively. She reads the court really well on both sides of it. She can tell where they're going to place the ball and she's able to get there. But she's also able to see where their holes are and be able to put the ball there.”

Caley Powell put down a couple of points as the Bears built a 19-16 lead. But points from Lail and Callie Stamey plus a double-hit error and a net violation evened the score at 20-all.

Bunker Hill seemed to seize momentum when Powell dug out a big hit, followed by a set from Ava Hamlett that went wide of the Bears' side of the court. Emily Moose tracked the ball down and her flailing, right-handed punch was able to avoid the net stick at a narrow angle with the ball rolling atop the net and onto the Blue Devils side of the floor to tie the set at 22-all.

However, Barr returned to the left side for a kill and Kilby ended the match with a block and a kill.

“The first set, I thought we played really awesome and that's what I told them,” Davis said. “The second set, we let up a little bit and the third set, we really let up. That’s what we told them, you can’t let up. We have to keep up our intensity the whole time and not just play one set.”

Maiden’s Grace Kilby, 11, goes up for the volley while Bunker Hill’s Caley Powell, 3, and Caitlin Robison, 20, try to defend.