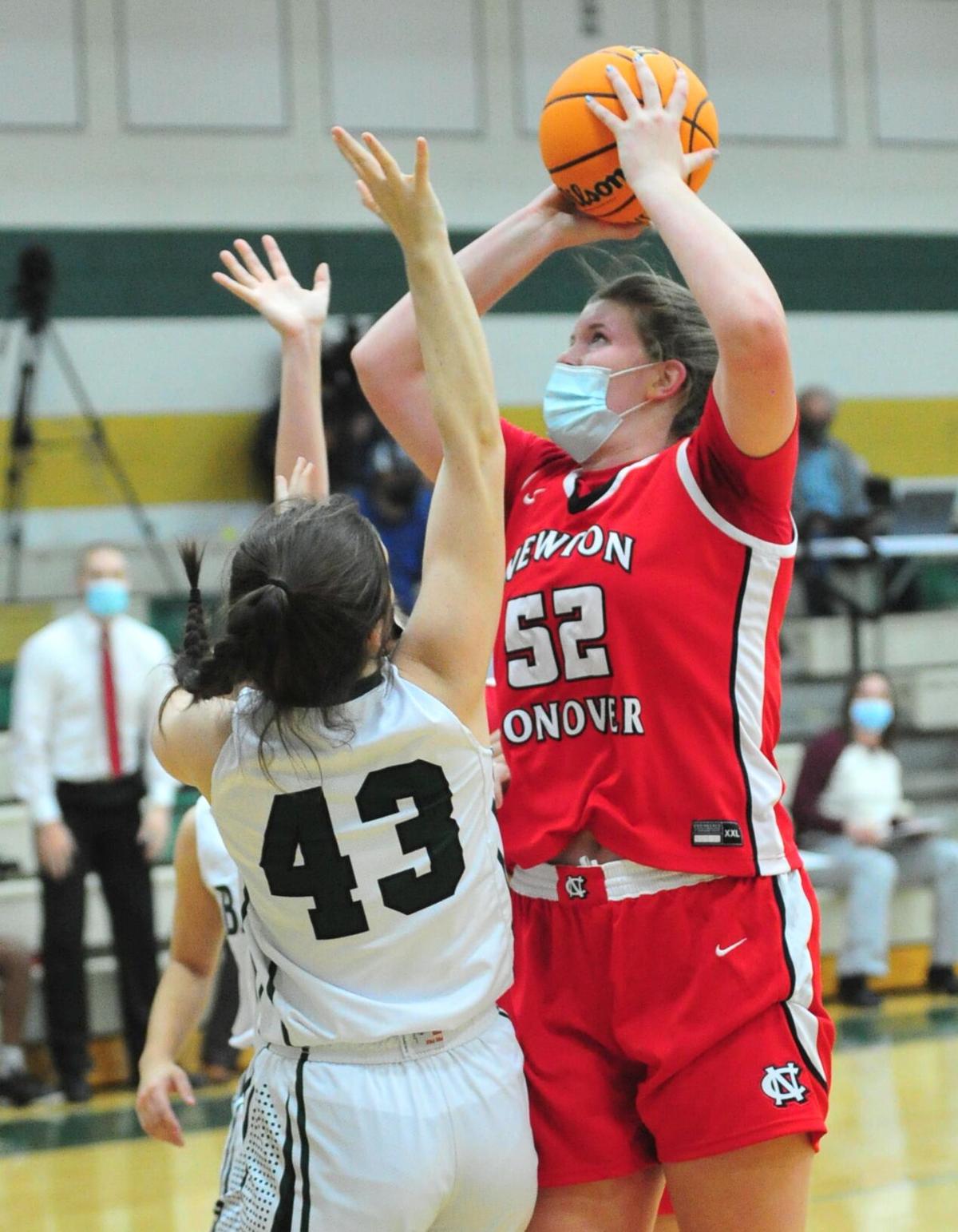 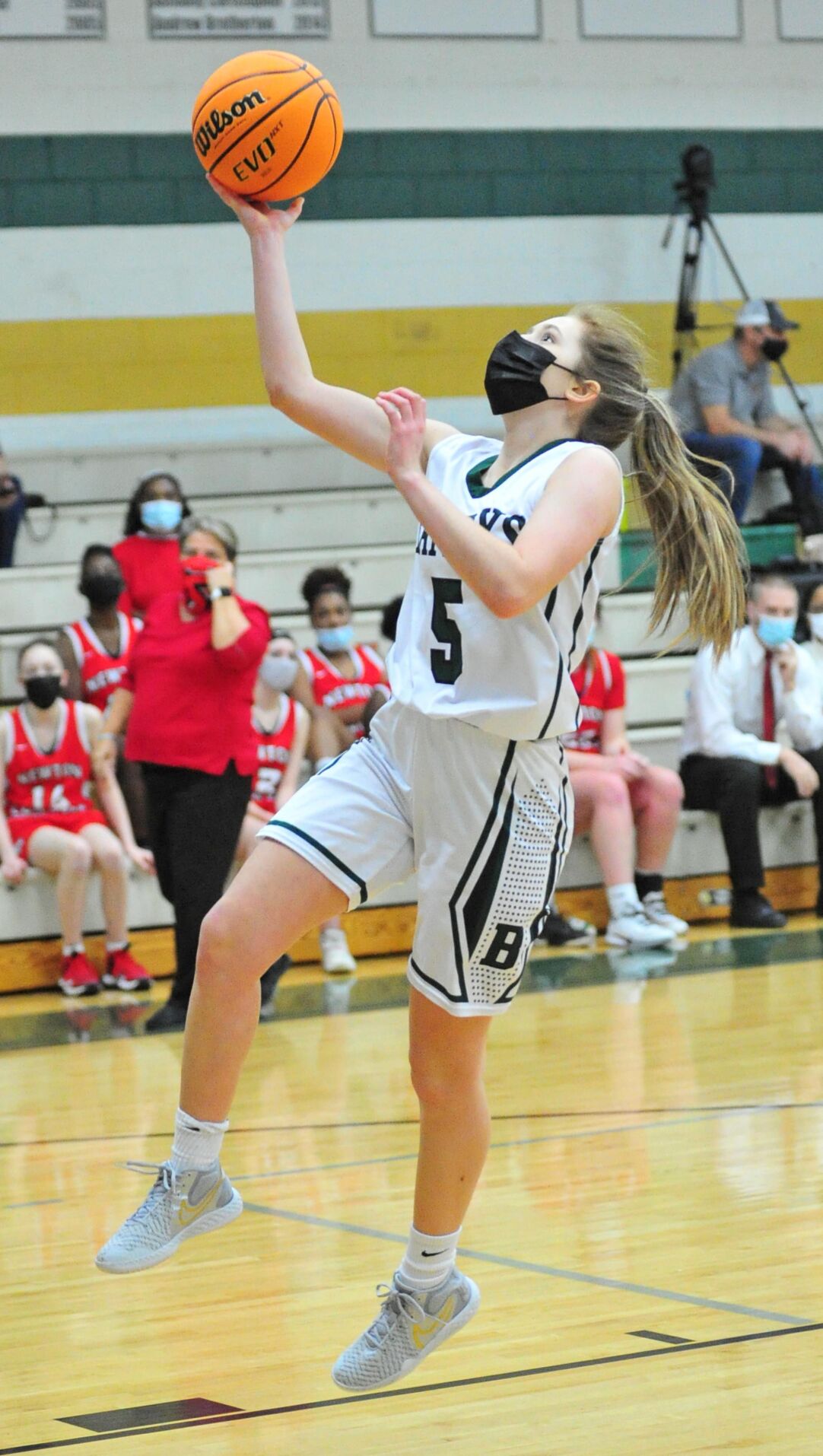 Bandys' Whitney Drummond (5) goes up for a uncontested layup during the game against Newton-Conover Thursday in Catawba.

CATAWBA — Newton-Conover girls basketball player Cassidy Geddes was held scoreless in the first half, but took the game over in the fourth quarter to lead the Red Devils to a 52-39 win at Bandys on Thursday evening.

The victory was the season opener for Newton-Conover, which improved to 1-0. Bandys is now 1-1.

“She’s an athlete,” Newton-Conover coach Sylvia White said of Geddes, who scored 12 of her 14 points, including three 3-pointers, in the final quarter with the game on the line. “She’s a winner. She’s going to make things happen.”

Down by five points at the half (24-19) and three points after the third quarter (31-28), the final period was less than 30 seconds old when Geddes launched a 3 from the top of the key to tie things up for Newton-Conover.

After the two South Fork 2A Conference foes traded free throws, Geddes drained another trey from the right wing to put the Red Devils up 35-32. It was their first lead since 5:12 of the second quarter. They didn’t relinquish that lead for the remainder of the game.

Once they had the lead, the visitors from Newton-Conover were as relentless at the defensive end of the court as they were on the offensive. Bandys’ entire offensive output in the final quarter came from the free-throw line as the Trojans were forced into six turnovers in the fourth period and 25 for the game.

“They (Bandys) executed everything we asked them to, everything we practiced yesterday, in that first half and even the third quarter. They just fizzled out,” Bandys coach Nicki Brittain said. “I told them that’s on me. We’re out of shape, it’s on me. I can do better getting them prepared for game situations.”

Bandys fought ferociously to come back from 10 points behind in the second quarter to lead by as many as nine in the third quarter. The Trojans held Newton-Conover without a point for a 5-minute, 45-second span in the third quarter and led 29-20 after a Logan Dutka triple.

But the Trojans only scored two points the rest of the third quarter and saw their lead shrink to 31-28 going into the final period.

“Offensively, we just kept kind of forcing things in. We weren’t being patient,” Brittain said. “We needed to work around and find the best way in like we were in the first half.”

White noted her team had its own troubles offensively, especially in the second period when the Red Devils were outscored 18-5.

“We weren’t running our offense. We were coming down and making one pass and throwing it up,” said White. “That’s not us, that’s never been us. That’s not going to be us.”

Leading 35-34 with just over five minutes remaining in the game, Newton-Conover got a big putback from Grace Loftin after she grabbed an offensive rebound. Loftin converted one of two free throws to make it a four-point game, 38-34, and then found Nalece Duncan for a key basket to take the Newton-Conover lead to six points. It was one of two killer baskets in the fourth quarter for Duncan.

“She (Duncan) is a competitor, so you know when it’s on the line, she’s not afraid to say, ‘Give me the ball,’” White said.

Loftin led the Red Devils with 18 points and Geddes had 14. Emma Fox scored 10 points and blocked five shots before fouling out.

Dutka set the pace for Bandys with 19 points and Cailyn Huggins was next with seven.

“We had ‘Marty’ Huggins step up big for us again. She did an awesome job,” Brittain said. “We gave her the job of guarding 52 (Fox) and she executed that well.”

Newton-Conover will play on Tuesday at West Lincoln, while Bandys is at Lincolnton the same night.

The final two area teams left in the North Carolina High School Athletic Association’s volleyball tournament are familiar with each other.

Bandys' Whitney Drummond (5) goes up for a uncontested layup during the game against Newton-Conover Thursday in Catawba.