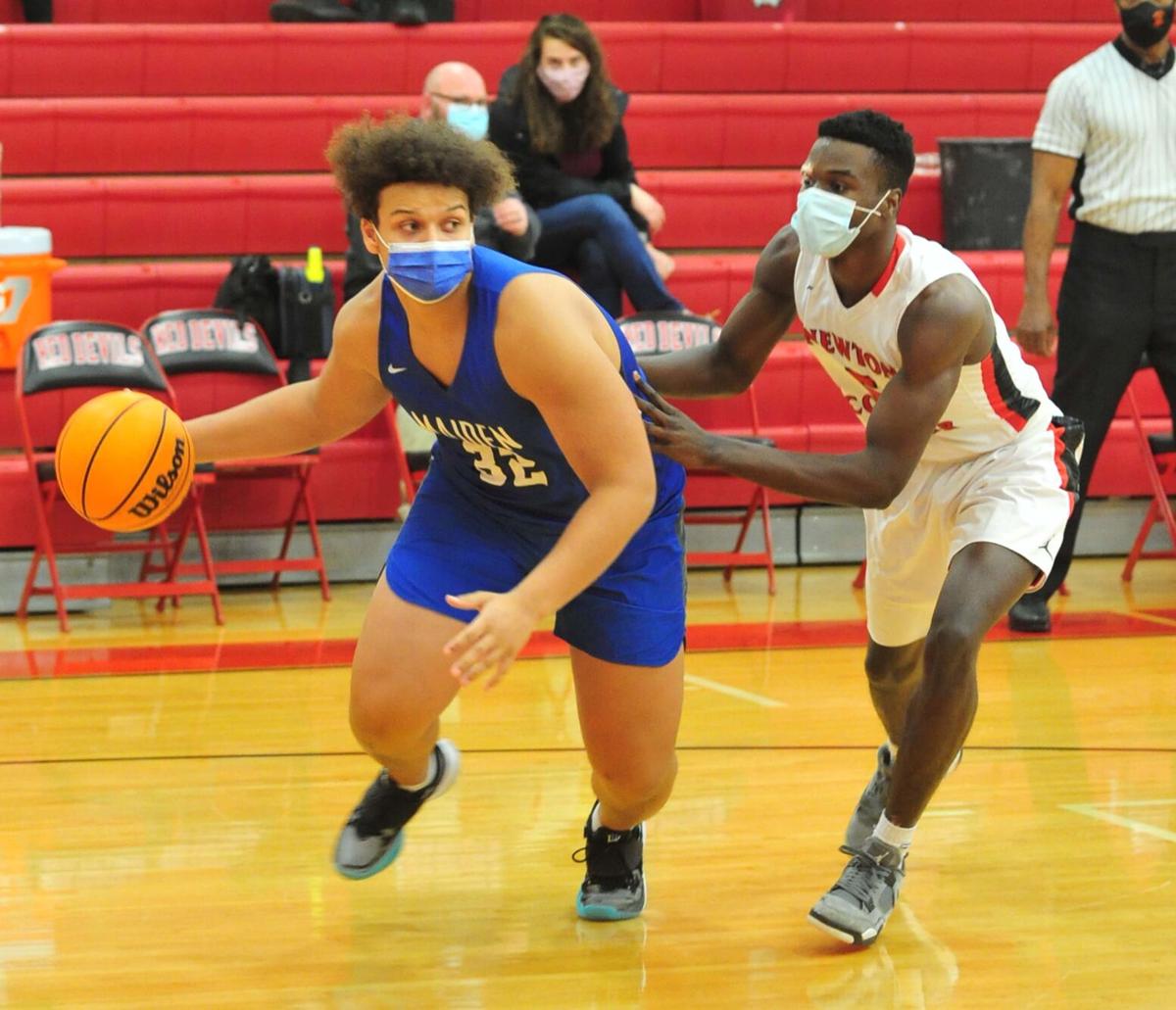 Maiden's Dru McClough (32) drives the baseline against Newton-Conover's Zane Redmond (5) Tuesday in Newton. McClough finished with 15 points in the Blue Devils' 58-39 victory over the Red Devils. 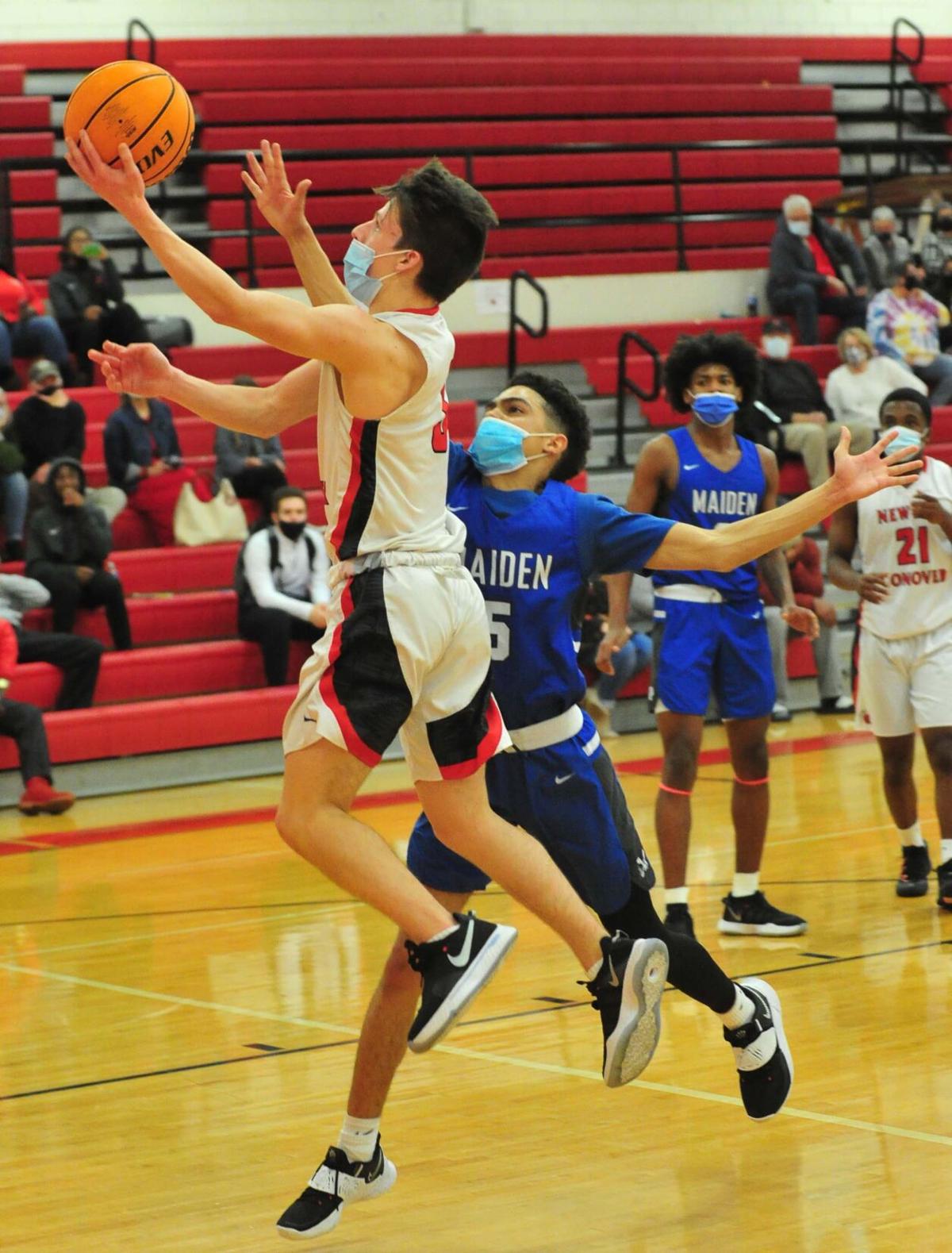 Newton-Conover's Maverick Davis (3) gets up in the air for a shot while Maiden's Jayden Roseman (5) tries to defend Tuesday in Newton.

NEWTON — It has been an up-and-down year for both the Maiden and Newton-Conover boys basketball teams. On Tuesday night, Maiden was up and Newton-Conover was down. The visiting Blue Devils took advantage of the Red Devils' shooting woes and pulled away in the second half for a dominant 58-39 victory.

The win snaps a three-game skid for Maiden, now 7-6, and moves the Blue Devils ahead of the Red Devils in the South Fork 2A Conference standings. It also gives the Blue Devils a season sweep in the series as they won the first contest as well, albeit in double overtime.

“We needed that one. It’s a tough time of year,” said Maiden coach Justin Brittain, noting the unusual overlap in sports seasons at the current time thanks to the COVID-related schedule adjustments. “(We) just competed as a team tonight, see what happens and that’s the bottom line.”

Like Maiden, Newton-Conover came into the game with a 6-6 record, but dropped its third straight to fall to 6-7 with one game to play in the season.

Izaiah Morgan and Chris Culliver got the ball rolling for the Blue Devils with 3-pointers to start the ballgame. Although Quincey Spain answered with a 3 of his own for the Red Devils just over two minutes into the game, that was the only made field goal attempt for Newton-Conover in the first 11 shots the Red Devils took.

Meanwhile, the Blue Devils were making a pretty good living at the arc with two more triples by Morgan and Jayden Roseman. Culliver also scored in the lane for a 14-3 Maiden lead.

Jackson Mullins finally connected for Newton-Conover with 1:25 to play in the opening period and added a layup thanks to a feed from Zane Redmond. However, Morgan had the final say in the period with his third 3 to give the Blue Devils a 17-8 advantage after one quarter.

“Not executing and not finishing some of those easy baskets,” Wilkinson said of his team’s difficulty getting the ball to fall. “It’s easy when you make those things. Your defensive effort picks up a little bit.”

Down nine, the Red Devils were not finished in the least. Justice Craig hit from behind the arc three times in the second quarter and Redmond added a couple of 2-pointers. Newton-Conover went on a 10-0 run and tied the score at 23-all on a Redmond drive to the basket.

But Micah Haynes launched a 3 and Roseman followed with a drive and underhanded scoop to end the first-half scoring with Maiden in front 28-23.

The Blue Devils then opened the third stanza on an 8-3 run to build a double-digit lead, and the Red Devils didn’t have an answer. The Blue Devils claimed a 44-30 lead by the end of the period and quickly extended it in the fourth quarter behind the inside muscle of Dru McClough.

McClough finished with 15 points, 12 in the second half.

“Dru’s been solid for us. When we can find him, he’s a presence for us down there,” Brittain said. “He’s been a rock for us all year. He’s played a lot of minutes and fills a lot of roles for us.”

Maiden limited the Red Devils to single-digit scoring in three of four quarters and only allowed one Newton-Conover player, Craig with 11 points, to reach double figures. Maverick Davis was next with nine in his final home game in a Newton-Conover uniform.

“Defensively, we played solid. Zane (Redmond) had 39 on us the last time. So that was the number one goal was to keep him in check,” Brittain said. “We wanted to take away some of his penetration and get out on the shooters. We felt we could do a decent job.”

Morgan finished with a team-high 16 points for Maiden. Joining him and McClough in double figures was Roseman with 11.

The free-throw line didn't play much of a factor in the game, as Newton-Conover was 4-for-4 from there on two technical fouls and Maiden shot just two at the other end and made one.

Maiden will finish its season at home on Friday versus Lincolnton, while Newton-Conover travels to East Lincoln the same night.

The North Carolina High School Athletic Association announced the playoff pairings for the high school basketball playoffs on Sunday, with the…

WEEKLY WATCH: Spring football is here, and so begins a 7-week sprint

It’s over six months late but, at long last, the high school football season begins for the 2020-21 academic year. It’ll be a seven-week sprin…

Maiden not backing away from high expectations

MAIDEN — COVID-19 protocols may not allow for an abundance of fans in the stands at Maiden’s football games this season. But the Blue Devils a…

It was a good first round for the area, as eight of the 13 teams from the three local conferences advanced to Thursday’s second round of the N…

The Hickory boys basketball team starts two juniors and three sophomores, and on Tuesday night the youthful Red Tornadoes were tested in a maj…

Maiden's Dru McClough (32) drives the baseline against Newton-Conover's Zane Redmond (5) Tuesday in Newton. McClough finished with 15 points in the Blue Devils' 58-39 victory over the Red Devils.

Newton-Conover's Maverick Davis (3) gets up in the air for a shot while Maiden's Jayden Roseman (5) tries to defend Tuesday in Newton.