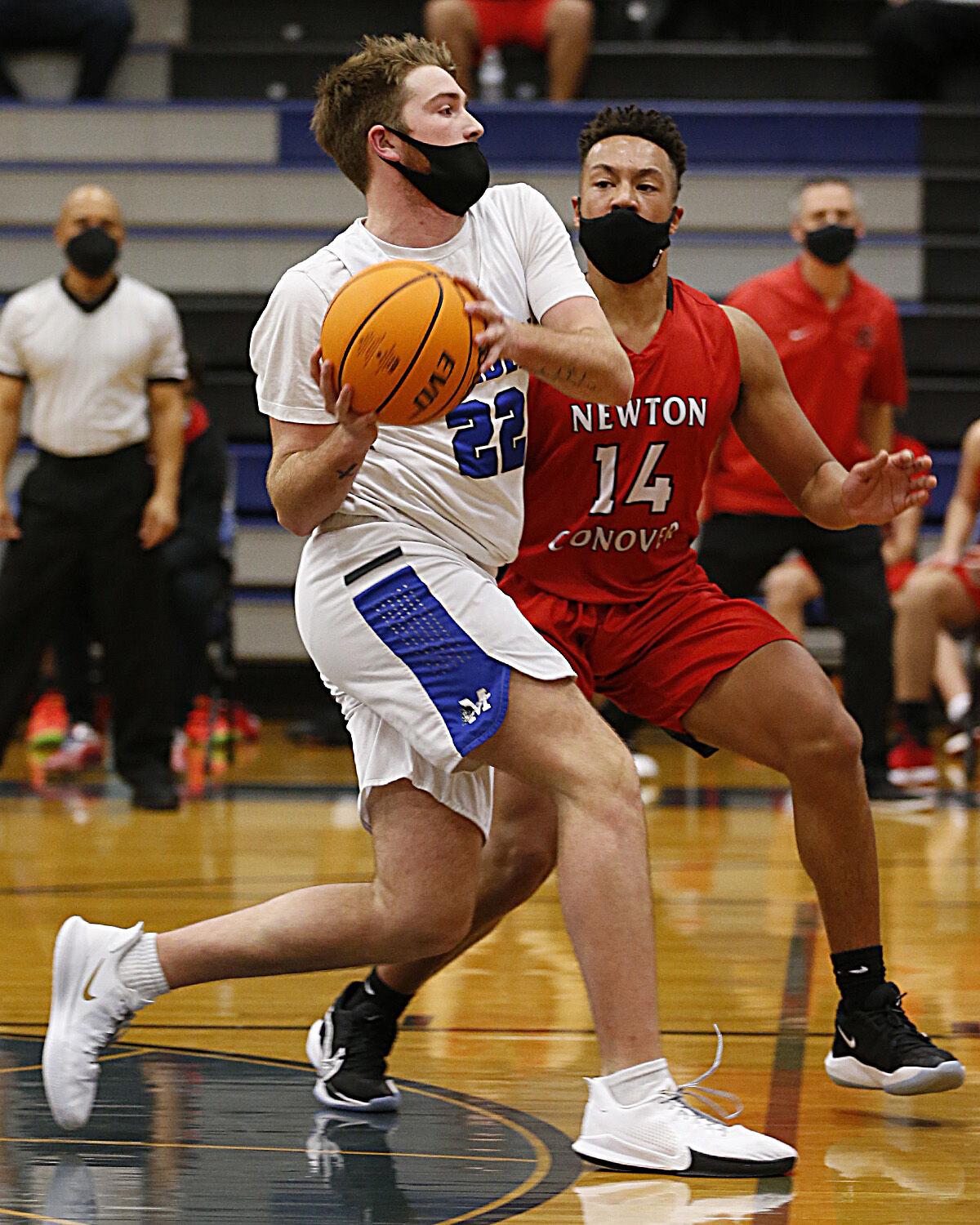 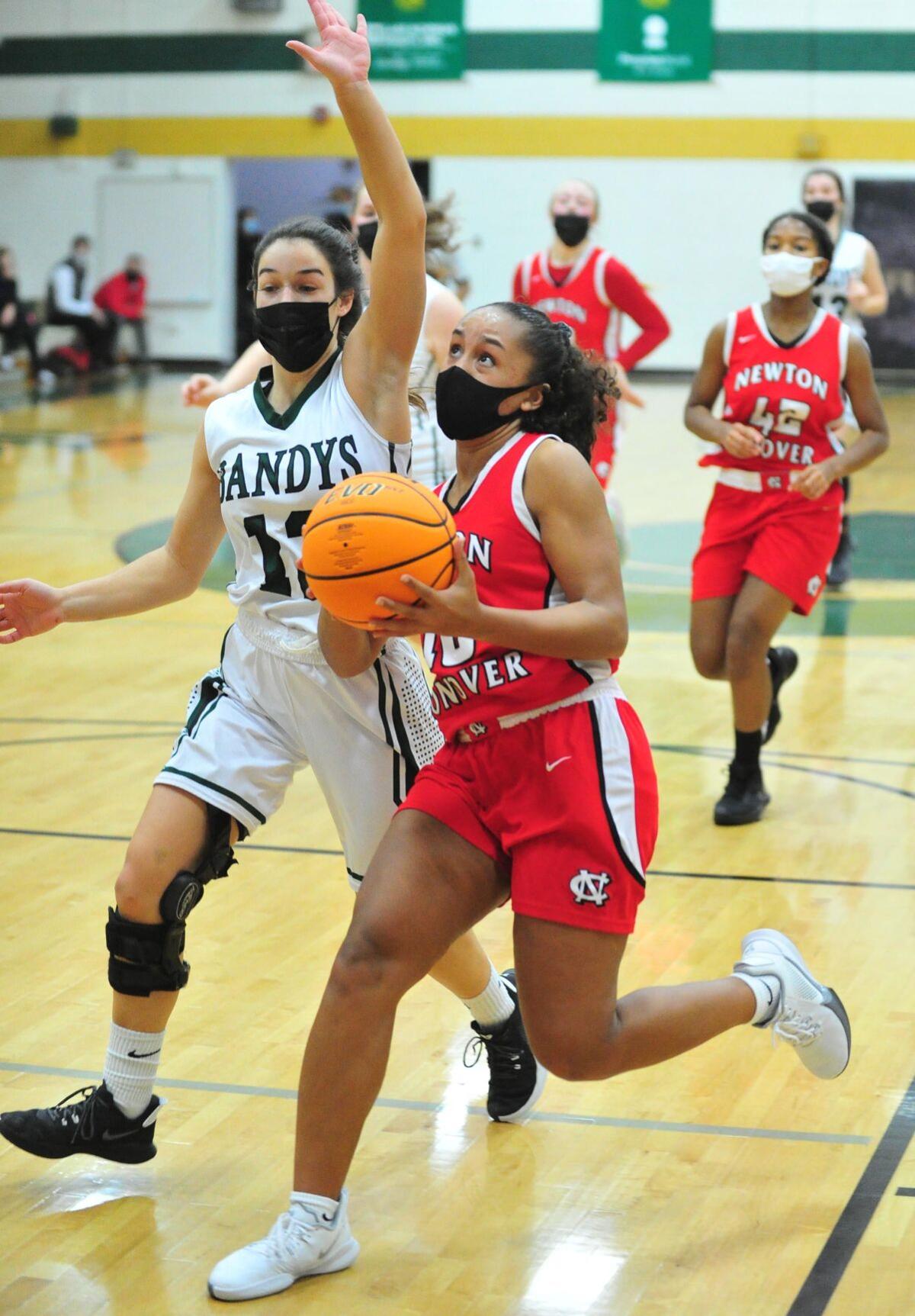 Newton-Conover's Cassidy Geddes (10) looks to shoot while being closely guarded by Bandys' Hope Clements (12) in a file photo from earlier this season.

MAIDEN — The Maiden High boys basketball team overcame a big night from Newton-Conover’s Zane Redmond and outlasted the Red Devils 68-63 in a double-overtime thriller Friday night in a South Fork 2A Conference contest.

The win snapped a two-game losing streak for Maiden (3-2) and kept the Blue Devils within striking distance of one of the two automatic berths for the 2A state playoffs next month. They’ll head into Tuesday’s scheduled conference game at Lincolnton a game behind East Lincoln and Lincolnton in the loss column. North Lincoln currently leads the conference at 3-0 with games to be made up due to recent COVID-19 quarantine issues. The Knights were to have played Lincolnton (3-1), but the Wolves are currently sitting out a quarantine. East Lincoln (5-1) routed West Lincoln and will next play at Newton-Conover on Tuesday.

“It seems like we’ve been on the wrong side of those lately,” said Blue Devils head coach Justin Brittain, whose team’s losses came by five and four points at home to Lake Norman Charter and East Lincoln. “I know the kids have it in their system to battle back. I thought they did that tonight.”

The back-and-forth affair featured 13 ties and six lead changes with neither team leading by more than seven. The five-point margin over victory by Maiden matched its largest lead of the contest.

Individually, it was the Redmond show. Long and lanky, the 6-foot-4 junior for the Red Devils finished the night with 39 points, seven rebounds, three steals and four blocks. Redmond made 15 of 19 shots from the floor, including 3-for-4 from beyond the 3-point arc. His night started with a pair of steals that turned into end-to-end layups. A dribble-drive layup sparked a 6-0 run that pushed the Red Devils up 22-15 with 2:36 left in the half.

“That young man is playing his rear end off,” said Newton-Conover head coach Matt Wilkinson. “He really has all season. He’s really improved his game day in and day out. He’s knocking down some shots and has done a better job from the free-throw line (6 of 8 on Friday). He gave us an opportunity to win the ballgame.”

Newton-Conover took a five-point lead into the second half, but a quick-handed rebounding squad kept the Blue Devils in the game.

Maiden chiseled away at the lead with a strong effort on the offensive glass that turned out to be the difference in the game. For the game, Maiden outrebounded Newton-Conover 42-23, which included 16 on the offensive end that led to a 23-7 advantage in second-chance points.

Nine of those came in the third quarter, off the hands of four different players, who allowed the Blue Devils to chisel away the deficit.

A drive through the lane led to a missed layup from Mason Lowman, but he followed up his shot to bring Maiden within 37-36 after three quarters.

Also key in the third quarter was Iziah Morgan (12 rebounds), who scored eight of his team-high 21 points in the period, including a follow-up of a missed 3-pointer.

Maiden finally took its first lead since early in the second quarter after Dru McClough was fouled on an offensive rebound and made two free throws.

Later, a missed McClough free throw turned into a bucket by Morgan that gave Maiden a 44-39 lead with 5:15 left in regulation.

The teams traded a 3 off the left wing by Redmond and a high bank shot from McClough. Redmond’s leaner and ensuing free throw plus another 3 from the top of the circle put the Red Devils back up 48-46 with 2:55 left. But a foul on a 3-point attempt led to three free throws by Morgan. As it turned out, Maiden never trailed again.

Redmond tied the score at 51-all when he faked a jumper at the arc, then sped through the Blue Devils before spotting up for a short jumper with 50 seconds left. Content to play for the final shot, the Blue Devils took the lead with 6.3 seconds left after Chris Culliver (16 points) followed his own miss.

After a timeout, Jackson Mullins sprinted end to end on the dribble before dropping off a short pass to Redmond, who put in a layup just before the buzzer to send the game to overtime tied at 53-all.

The first overtime was nearly played in its entirety without a whistle with McClough and Redmond controlling the scoring. Bulling his way around the post, McClough (14 points, 10 rebounds) scored six to counter Redmond’s jumper and finger roll shots.

“When his motor gets going, he’s a tough load,” said Brittain. “That’s a key for him is to get that motor going. He’s dangerous when he brings that energy and aggressiveness:”

After Redmond missed a shot, Maiden sought to run out the clock before Javon Barber stole a kickout pass and raced to the other end to score with 48 seconds left. A play after a Maiden timeout with 4.8 seconds left yielded nothing for the Blue Devils.

Maiden took charge in the second overtime with fast-break layups by Culliver and Morgan. A steal and layup by Davis pulled Newton-Conover within 63-61, but Maiden was able to make 5 of 8 free throws over the final 1:11 to put the game away.

Also key to the win was the ability to finally stop Redmond, who did not score over the last 6:29 of the game and took just one shot.

“He’s so tough and so long,” said Brittain. “He’s a hard guard for anybody in our conference to face ... He got a lot of points tonight, but I thought we did a really good job on the other guys. That’s what we told them. Zane Redmond is going to get his, but we need to limit his and keep others in check.”

After a slow start, the Red Devils got big games from their big three and pulled away from Maiden to remain unbeaten at 6-0. The win is the 40th straight in South Fork 2A Conference play, dating back to a loss at Lincolnton just over three years ago this week. It is also the ninth win in a row over Maiden.

Aggressively playing the Newton-Conover passes into the post, the Blue Devils (1-4) pulled out to 15-9 lead after one quarter. Through the first timeout with 3:27 left in the first quarter, Maiden had forced seven turnovers and held the Red Devils to three shots with Newton-Conover racking up six fouls. The Blue Devils put down three 3-pointers in the process, two by Maggie Andrews (16 points).

But Newton-Conover went back to what it does well, pound the ball inside. Six-foot-four junior Emma Fox scored six points early in the second quarter, four off the offensive glass, and the Red Devils tied the game at 19-all. A pair of free throws from Grace Loftin broke the tie and Newton-Conover never trailed again.

With Fox and the 5-10 Loftin down low, the Red Devils outrebounded Maiden 47-33 in the game, with 16 offensive boards that led to 14 second-chance points. Fox finished the game with 19 points and 12 boards, while Loftin scored 17 and pulled 21 rebounds.

Also crucial to the win was sophomore point guard Cassidy Geddes, who helped harass the Blue Devils into 27 turnovers. Geddes also had a double-double, with hers coming on 17 points and 10 steals.

Maiden stayed as close as 27-24 early in the third quarter before a 14-2 run put the game away.

The Red Devils host East Lincoln on Tuesday, while Maiden is at Lincolnton.

The North Carolina High School Athletic Association announced the playoff pairings for the high school basketball playoffs on Sunday, with the…

WEEKLY WATCH: Spring football is here, and so begins a 7-week sprint

It’s over six months late but, at long last, the high school football season begins for the 2020-21 academic year. It’ll be a seven-week sprin…

The Hickory boys basketball team starts two juniors and three sophomores, and on Tuesday night the youthful Red Tornadoes were tested in a maj…

Newton-Conover's Cassidy Geddes (10) looks to shoot while being closely guarded by Bandys' Hope Clements (12) in a file photo from earlier this season.