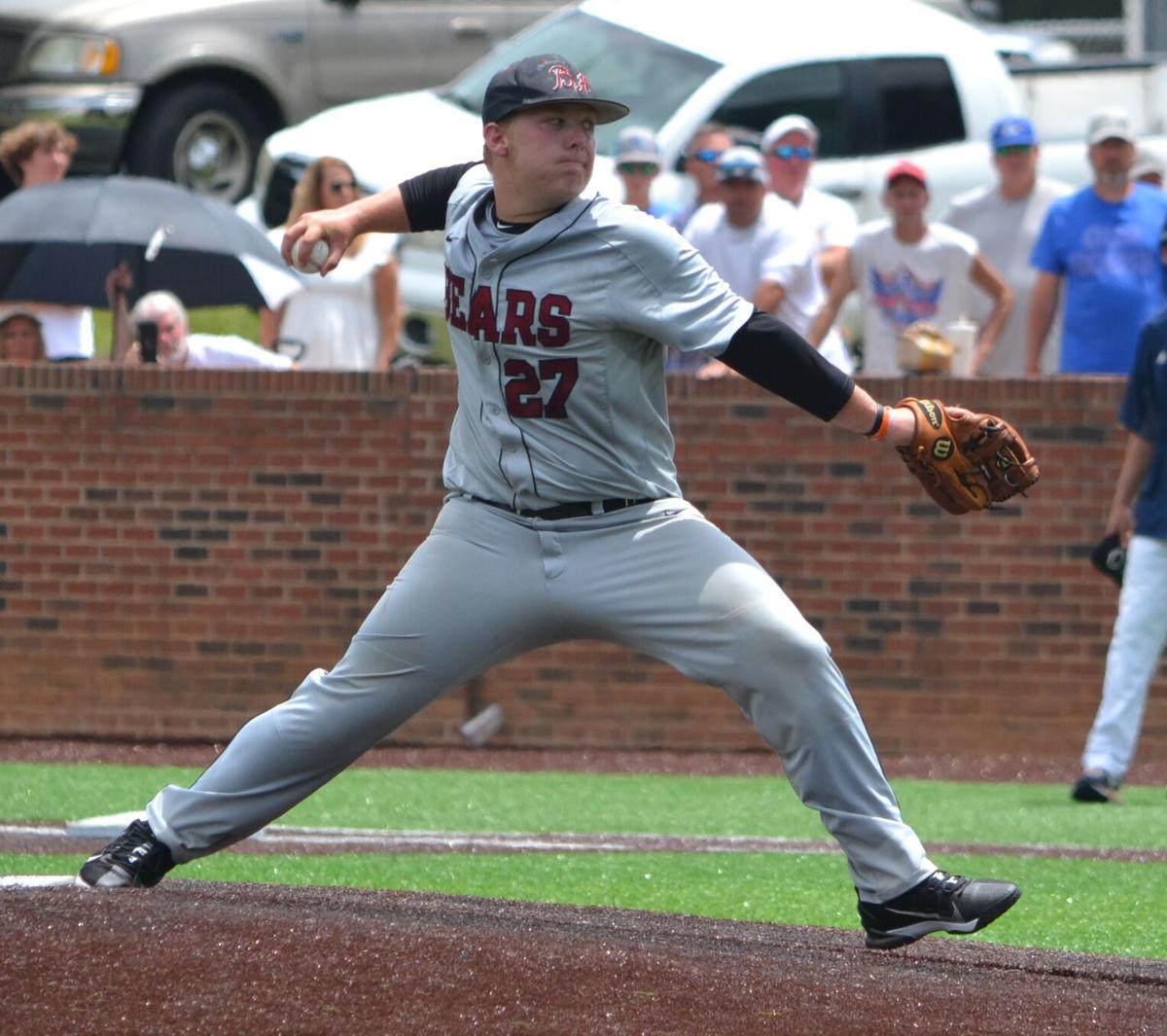 Bunker Hill's Jordan Yoder, 27, fires a pitch to the plate in the late innings of Thursday afternoon's game against Fred T. Foard at Lenoir-Rhyne. Yoder threw a complete-game shutout, allowing four hits with seven strikeouts and five walks in the Bears' 6-0 win over the Tigers. 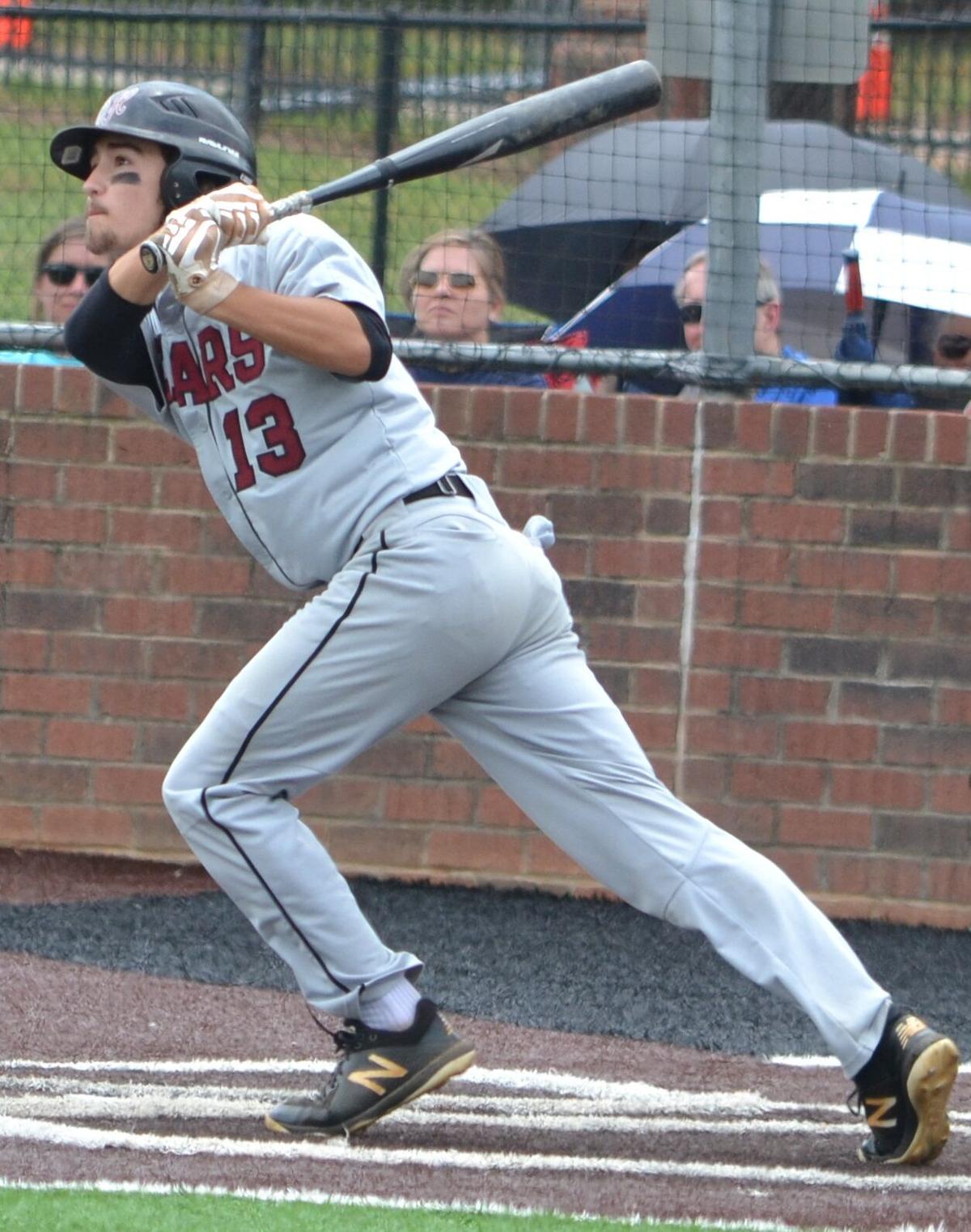 Entering the final week of the regular season, the Bunker Hill baseball team knew it needed to win at least one of two games against Fred T. Foard to capture the Northwestern Foothills 2A Conference championship. Following the Bears’ five-run loss to the Tigers on Tuesday, Thursday’s regular-season finale between the Catawba County rivals became a winner-take-all matchup.

The contest was originally scheduled to take place on Foard’s home diamond in Newton, but was moved to Lenoir-Rhyne’s Durham Field due to the threat of rain and thunderstorms. The start time of the game was also changed from 7 p.m. to 1 p.m., resulting in a Thursday afternoon clash with the league crown at stake.

After the Tigers’ Lane Essary exceeded 100 pitches in a strong outing on Tuesday, he was unavailable for Thursday’s contest. This time, it was Bunker Hill’s Jordan Yoder who dominated on the mound, helping the Bears vanquish Foard 6-0 to earn the conference’s top state playoff seed.

“I’m so proud of these kids because I told them the other night that the pressure was still on Fred T. Foard, they had to beat us twice,” Bunker Hill coach Todd Setzer said. “We didn’t have a great game Tuesday night, we give them (Foard) credit for it, and today we came out and did what we had to do.

“We put the ball in play, had great pitching from Yoder, no errors tonight,” he added. “So we did everything we had to do to win a baseball game, and that’s what you’ve got to do in the championship.”

Following a scoreless first inning, back-to-back singles from Bunker Hill’s Preston Workman and Carson Elder put runners at the corners to begin the top of the second before Casey Knighton walked to load the bases with no outs. After a strikeout, AJ Carpenter lifted a sacrifice fly to left, scoring Workman with the game’s first run.

The score remained the same until the fifth, when the Bears (13-1, 13-1 Northwestern Foothills 2A) struck for four runs on three hits. A one-out throwing error allowed Kaden Robinson to reach before Dalton Chapman singled. Following an RBI infield single from Workman and a fielding error off the bat of Elder that plated Chapman, Knighton delivered a two-run double down the left-field line to make it 5-0 in favor of Bunker Hill.

Bunker Hill added another run in the seventh when Yoder walked with the bases loaded, forcing in Workman. Then Yoder returned to the mound and retired the Tigers (12-2, 12-2) 1-2-3 — the last two via strikeouts — to put the finishing touches on the Bears’ victory.

“I had great defense behind me all day,” said Yoder. “My goal was just to go in there and do my job, just throw strikes was the main part. I knew my guys would make plays behind me, that’s what kept us in there, and we hit the ball great.”

All told, Yoder allowed four hits with seven strikeouts, five walks and a hit batsman in a complete-game performance. Essary had a fourth-inning single for Foard’s first hit, while Conor Peschel singled in the fifth and Braxton Tramel and Kylan Bolick recorded consecutive base hits in the sixth.

Foard used four pitchers, beginning with starter Josh Swink. Bolick replaced him in the fifth, while Peschel and Zac Martin both pitched in the seventh.

The quartet of Tigers hurlers combined to allow seven hits. Bunker Hill received three singles from Workman, two from Elder and one from Chapman, while Knighton had the only extra-base hit of the contest thanks to his fifth-inning two-bagger.

“It means a lot,” said Setzer of winning a conference championship. “This group, they’ve kind of been winners all the way through. They played in a state championship as little leaguers, they won their middle school championship, and it would have been real disappointing if we wouldn’t have won it all tonight. They came through, so I’m so proud of them.”

Bunker Hill and Foard are both set to compete in the 2A state playoffs beginning on Tuesday. Brackets will be released on Saturday.

Countries that have never won an Olympic medal

TAYLORSVILLE — On Tuesday night, the Alexander County Board of Education approved the hiring of Savanna Benbow as the head volleyball coach at…

LENOIR — After 17 seasons as the head coach of the Hibriten High softball team, Jim Blanton’s retirement was announced by athletic director De…

Bunker Hill's Jordan Yoder, 27, fires a pitch to the plate in the late innings of Thursday afternoon's game against Fred T. Foard at Lenoir-Rhyne. Yoder threw a complete-game shutout, allowing four hits with seven strikeouts and five walks in the Bears' 6-0 win over the Tigers.