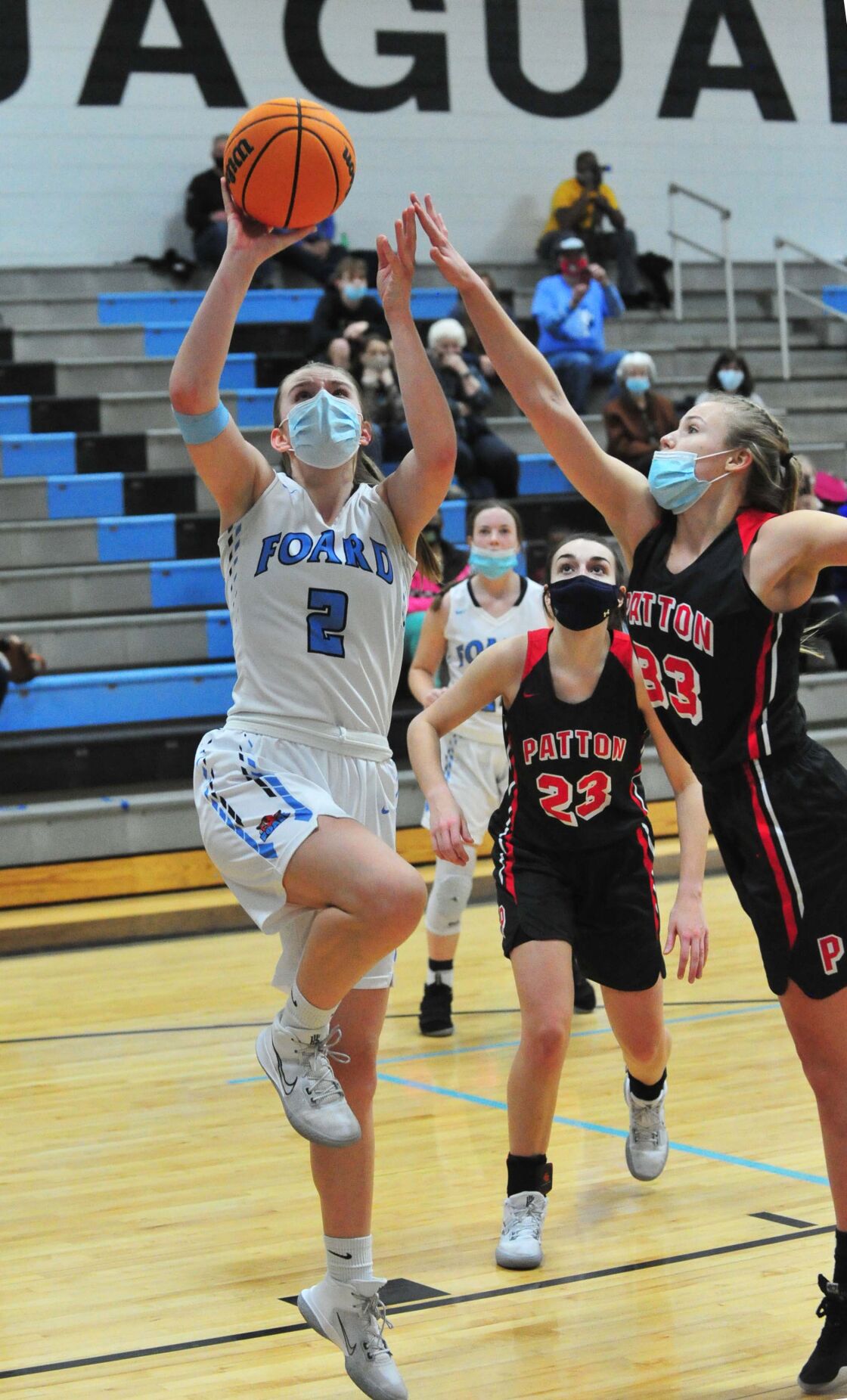 Fred T. Foard's Carley West (2) goes up for a shot attempt against Patton's Cierra Lail (33) Friday in Newton. West scored a game-high 21 points in the Tigers' 77-49 victory over the Panthers. 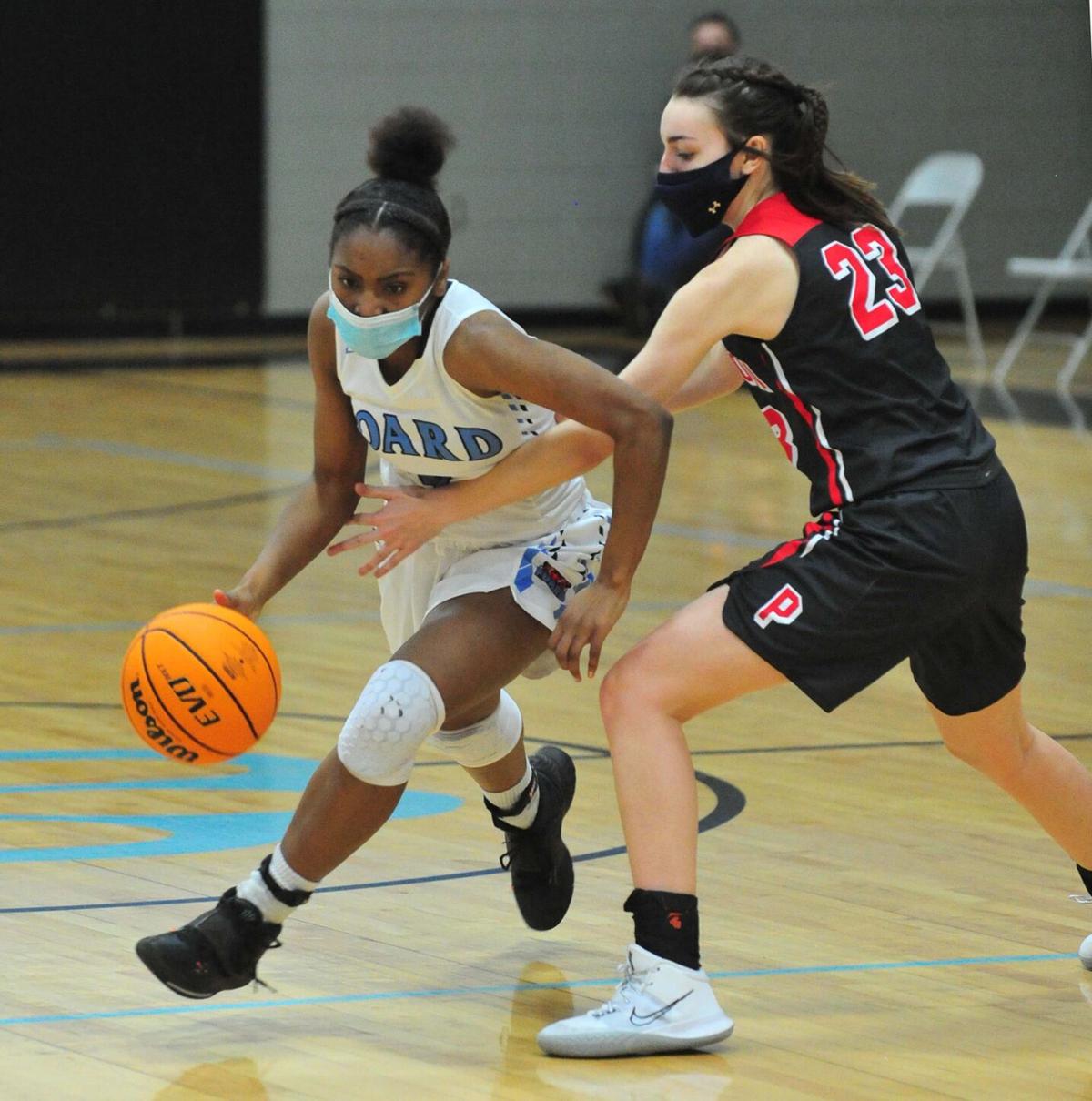 NEWTON — When the Fred T. Foard and Patton girls basketball teams met last month in Morganton, both sides enjoyed double-digit leads before the Tigers ultimately held on for a seven-point win. The second time around, the final result was the same — a Foard victory — but the way in which they got there was much different.

The Tigers built an early double-figure lead on Friday night at Jacobs Fork Middle School and never looked back, winning 77-49 to sweep the season series with the Panthers. The contest was unable to be played at Foard’s Jerry Copas Gym after a dunk during a boys’ game earlier in the week shattered the glass on the backboard.

Although the postgame draw featuring Patton, Draughn and Foard saw Patton earn the Northwestern Foothills 2A Conference’s No. 2 seed, Draughn take the No. 3 seed due to beating Foard twice and Foard have to settle for the No. 4 seed, Tigers head coach Brandy Dawkins was pleased with her team’s performance in its final game of the season. Foard finishes 7-4 both overall and in league play, while the Panthers head into the 2A state playoffs with an 8-5 record in both.

“I feel they gave a lot more effort today than they did against Draughn (Foard lost 67-58 at Draughn on Wednesday),” said Dawkins of her group. “I don’t know if it was the extra day off for rest (the game was originally scheduled for Thursday but was postponed due to inclement weather), but they came out and they executed on all cylinders. We played much better defense than we played all season, and some of the things we’ve been working on offensively of not rushing, taking better shots, we did that tonight.

“It was good to see it, hate the season’s coming to an end once we started clicking,” she added. “I hate that because any normal season we’d still have several games to go, but I’m proud of the girls, I’m glad that they came out and gave that kind of effort. ... I just hate that the season’s over.”

It took over seven minutes for Patton to score, and by the time Reece Fisher knocked down a 3-pointer from the left wing in the final minute of the opening quarter, the Panthers trailed 18-3. Alexis Wolgemuth responded with a pullup 3 on the other end for Foard, which led 21-3 at the end of the first frame.

Wolgemuth drilled another triple early in the second quarter as the Tigers continued to expand their lead. After a putback from Carley West made it 32-3 midway through the period, Fisher made her second 3 of the night to end another lengthy scoring drought for the Panthers. The senior guard finished with nine points in the first half, but Foard led 38-11 at halftime.

On the other side, Foard’s lone senior, West, led all scorers with 21 points in what was likely her final game for the Tigers. She scored 13 of those points after the intermission to join three other Tigers in double figures — Wolgemuth with 19, Davoney Dellinger with 17 and Samaria Tipps with 12 — as Foard cruised to a 54-26 advantage after the third quarter and won by that same 28-point margin.

Fisher had 16 points to lead Patton, while Hayley Caraway finished with nine and Navaeh Duckworth added eight. The Panthers saw a four-game winning streak come to an end, and will learn their postseason fate when brackets are revealed on Sunday.

A postgame draw was required due to Foard beating Patton twice, Patton defeating Draughn twice and Draughn beating Foard twice, plus all three teams were swept by unbeaten league champion Bunker Hill (10-0). The Wildcats (6-4) could receive a wild-card berth, but it’s not likely that the Tigers will get the same opportunity.

“I think we went out with a bang, if we were gonna go out this is the way I’d want to go out,” said Dawkins. “I wish we’d have played this way on Wednesday, but we can’t go back, so hopefully it’s a life lesson to come out and take care of business. ... It’s always do-or-die, so hopefully we can just build on this going into next season and get there.”

SPEED KILLS: Maiden's passing game proves too much for Bandys in 21-7 win

While no team would wish to play through a high school basketball season during a pandemic, Hickory’s girls have not only survived the rigors …

Fred T. Foard's Carley West (2) goes up for a shot attempt against Patton's Cierra Lail (33) Friday in Newton. West scored a game-high 21 points in the Tigers' 77-49 victory over the Panthers.