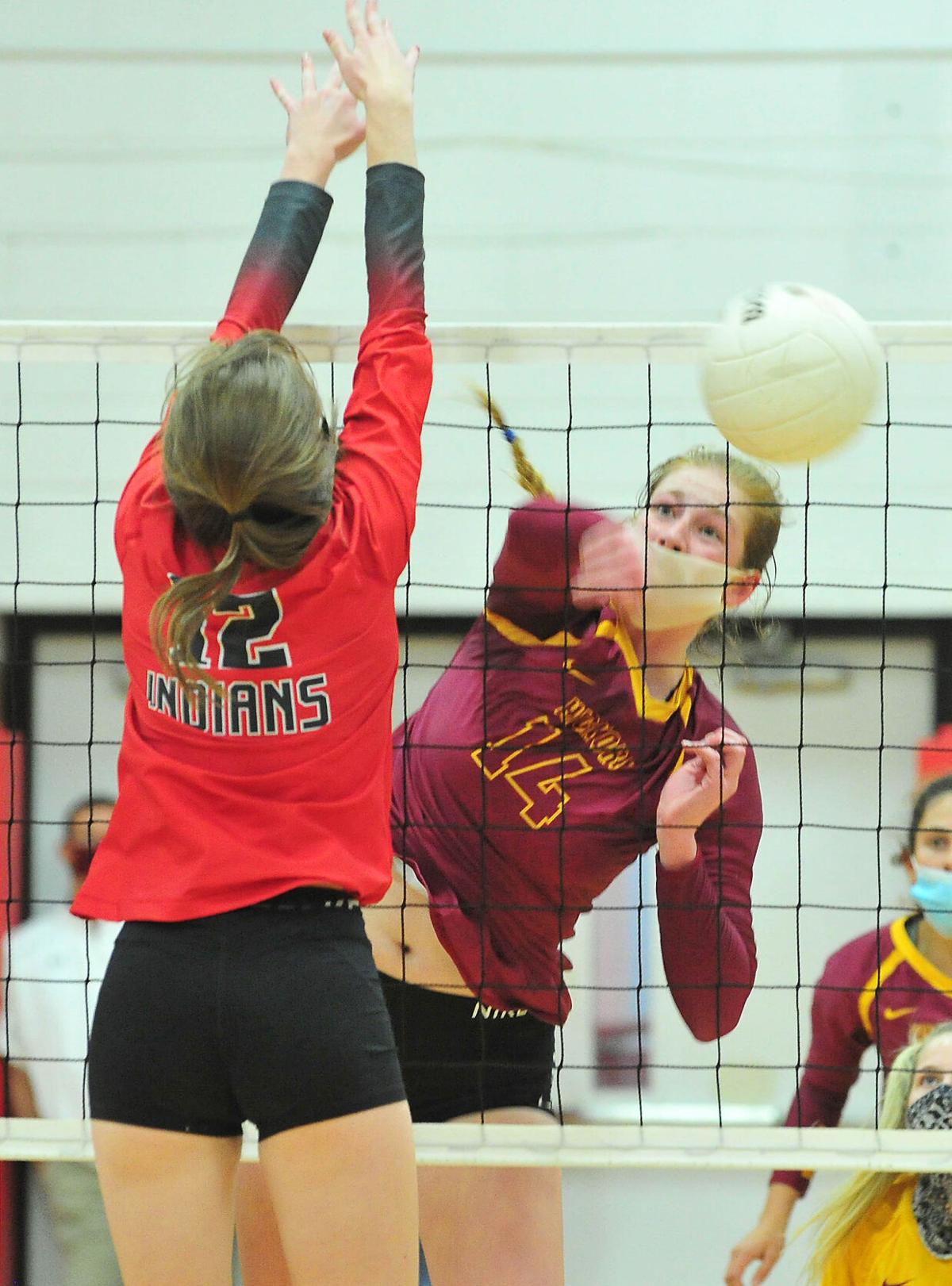 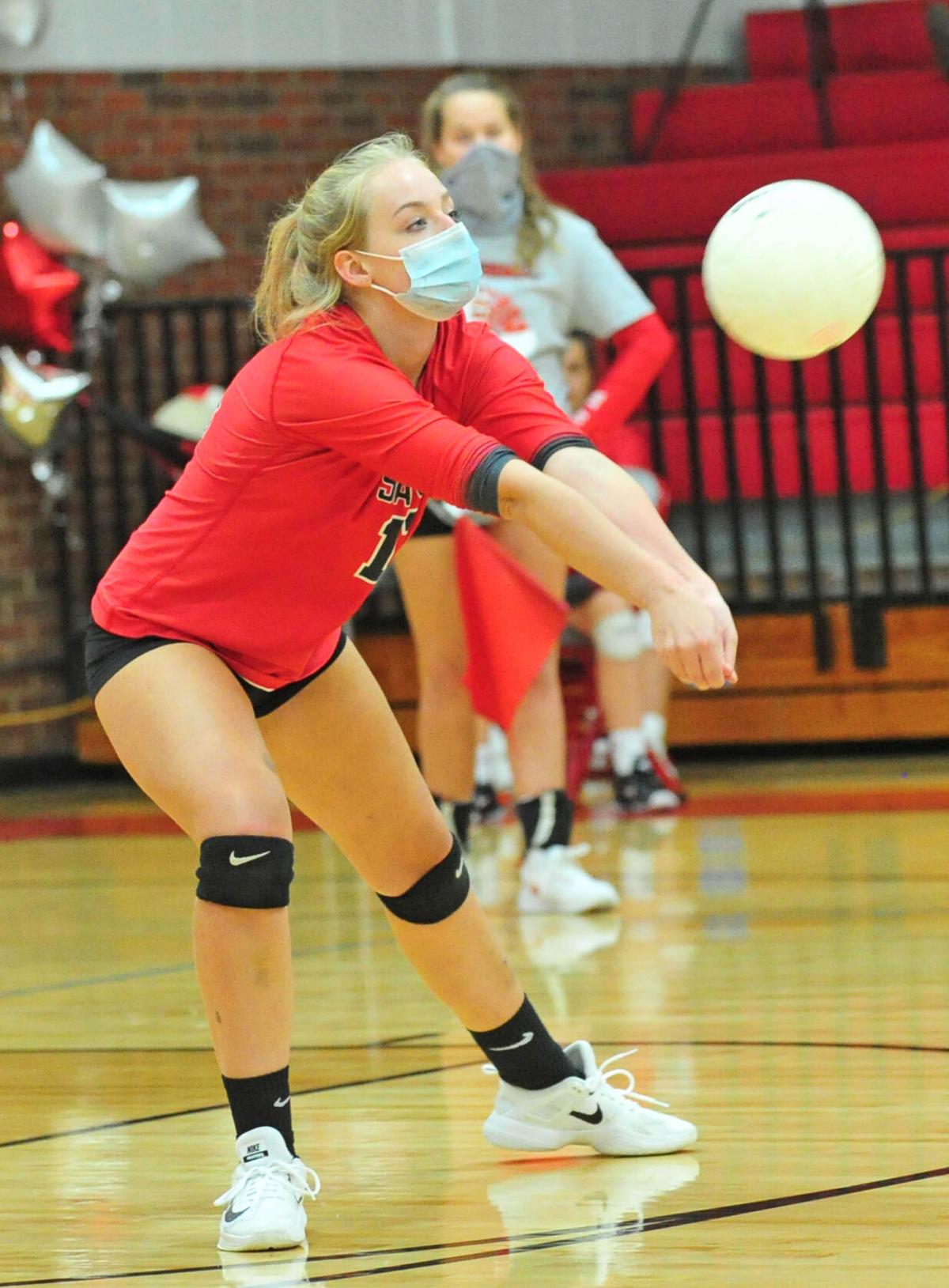 St. Stephens' Mackenzie Fairchild (11) makes a play on the ball during the match against Hickory Tuesday in Hickory.

Hickory High’s volleyball team dominated from the start and overwhelmed crosstown rival St. Stephens in a 3-0 road sweep during a Northwestern 3A/4A Conference match Tuesday night. The visitors trailed just once in winning by scores of 25-13, 25-18, 25-19.

The win kept Hickory in a tie for first with Watauga in the league, both at 3-0. The Indians dropped to 1-3 on the season. Both teams are off the remainder of the week for the Thanksgiving holiday before returning to host matches next Monday. St. Stephens takes on Freedom, while Hickory gets McDowell.

The Red Tornadoes set the tone of the match early by running up a 16-6 lead in the opening set. A pair of aces each by Bren White and Brooke Rowland and seven kills combined from three different players across the front line rattled the Indians' defense from the start, as did a block by Kellen Morin in the middle. Three straight errors from Hickory aided a brief comeback that brought St. Stephens within 19-13, but the Indians' attack missed the mark with four straight hitting errors snuffing out the rally.

“I thought we started fast tonight,” said Hickory head coach Jason Stephens. “We’ve been really good at serving the ball so far in these first three matches and that’s been very helpful in getting some of the balls back to where we want it a little bit easier.”

In the second set, White kept the Hickory hitters fed for a barrage of kills to the Indians' defenders. The senior setter dished out 13 assists in the middle set. Morin was the most effective hitter on the night, raining down shots throughout the match from her position in the middle. The Virginia Tech signee pounded eight kills in the set to go with a block and an ace.

Stephens said the atmosphere of the team’s play has been largely created by White’s play as the setter.

“I thought Kellen played really well tonight because we passed the ball so well, Stephens said. “Our setter Bren is so special. She’s such a good player and figures things out. She made great decisions on where to put the ball.”

In the second set, Hickory burst out of an early tie with a 9-1 run to make it 13-5 and the Indians got no closer to five the rest of the way.

Missing a pair of varsity players, Indians coach Julie Harris brought up a pair of junior varsity members to fill the spots. She said it took a while for the replacements and the teammates to adjust to each other, as well as the reality of facing the 6-foot-3 Morin across the net.

“I think we’re getting used to who was playing where,” said Harris. “I brought up a sophomore middle. I think it just took them a minute to get used to it. We knew coming in that we were going to face the gas. Once we got a couple of touches on it, we got some confidence. When she gets over us, you’re not going to stop Kellen.”

Once they adjusted, the Indians took the fight to Hickory in the third set. A pair of kills from Rylee Upton tied the score at 7-all before an ace from Carter Leatherman gave St. Stephens its only lead. White’s tap retied the score at 8 each. After an Indians hitting error, a kill from the backcourt by Morin and a block by Ellie Eichman pushed the lead to three.

Gradually, Hickory nursed the lead into a larger margin with Morin pumping down seven kills in the final set. White added seven more assists to her total of 28 for the match to go with four kills, which kept the Indians off balance.

Upton had four of her seven kills in the final set for St. Stephens.

The Fred T. Foard girls basketball team fell behind by double digits early in Thursday’s road game against Patton, but rallied to top the Pant…

With the completion of fall sports culminating in a state championship in volleyball for Fred T. Foard, as well as North Lincoln’s sweep of th…

St. Stephens' Mackenzie Fairchild (11) makes a play on the ball during the match against Hickory Tuesday in Hickory.