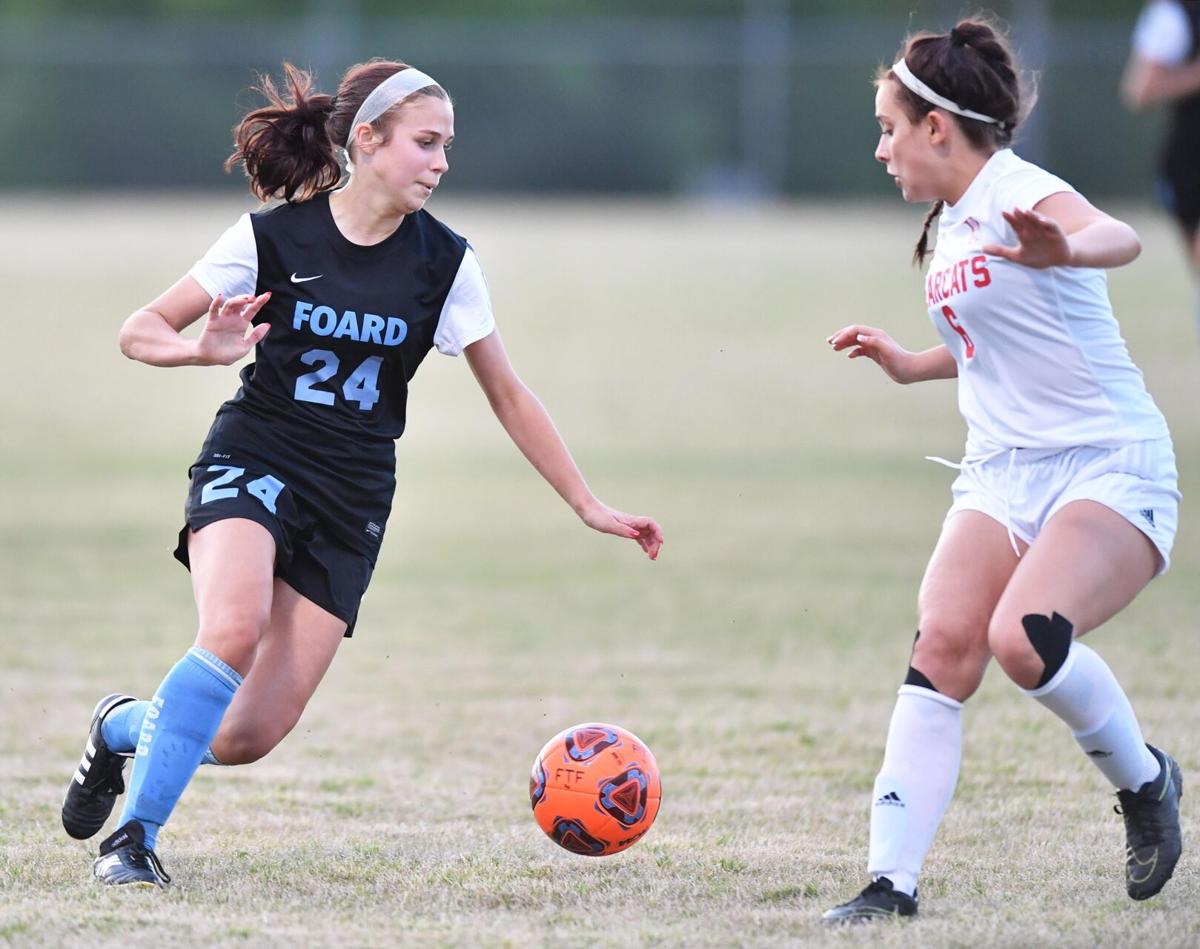 Fred T. Foard’s Anna Schmidt, 24, goes up against Hendersonville’s Anna Salvaggio, 6, during the opening round of the 2A state playoffs Monday in Newton. Schmidt scored the only goal in the Tigers’ 1-0 victory over the Bearcats. 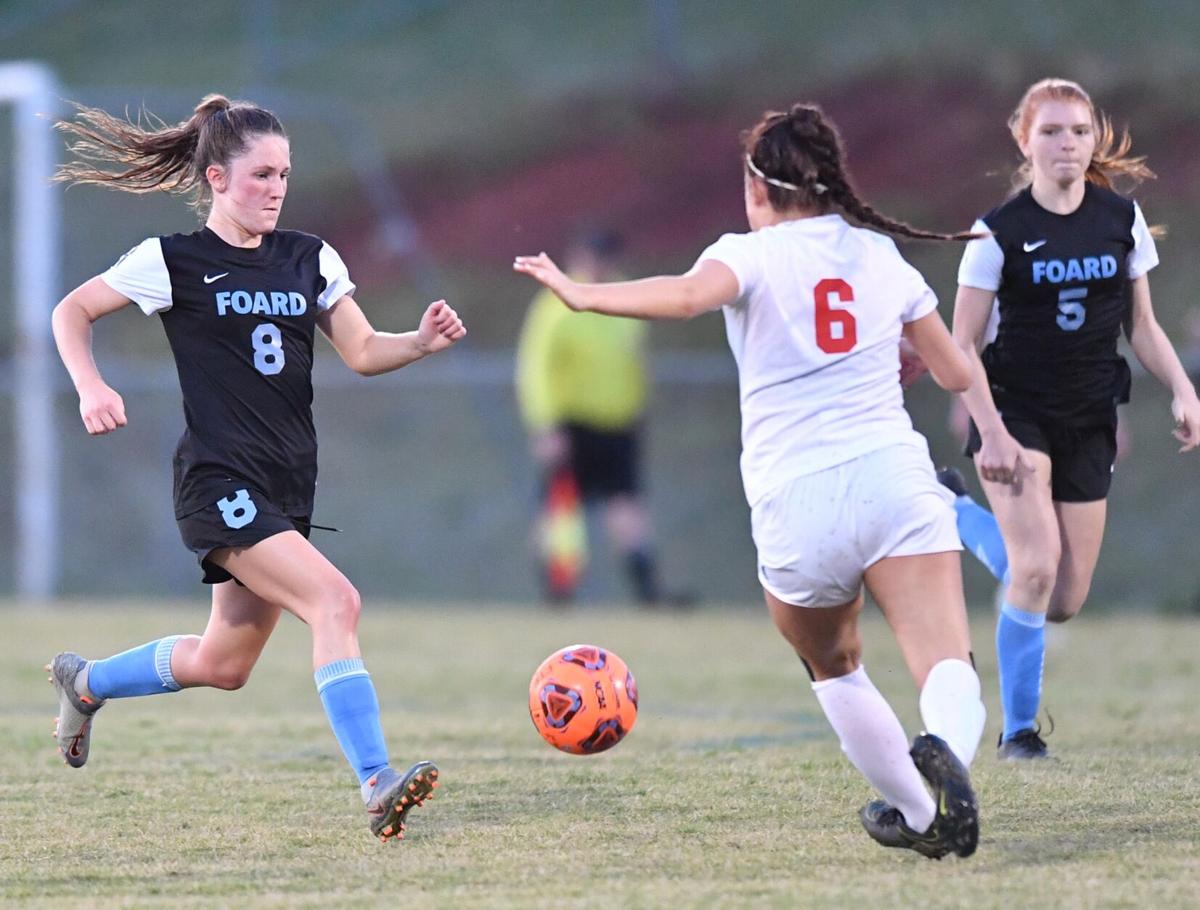 NEWTON — For 100 minutes, Hendersonville High’s girls soccer team controlled the stat sheet Monday night at Fred T. Foard. Twenty-four seconds into the third overtime, the Tigers controlled the match when Anna Schmidt completed a breakaway attempt and sent the only goal of the match into the net for a 1-0 win over the visitors in the first round of the North Carolina High School Athletic Association’s 2A girls soccer tournament.

In winning a match of unbeatens, Foard (13-0-1), eighth-seeded in the West Region, moves ahead to Wednesday’s second round when the Tigers will travel to No. 1 seed South Point (15-0). The Red Raiders advanced after a 3-1 win over 16th-seeded Central Davidson, also on Monday.

The 1-0 final gives no indication of the action that took place on the Tigers’ pitch. Using a term from the modern-day sports vernacular, Monday’s match could be described as an instant classic, with plenty of back-and-forth action throughout the contest.

“Wow,” said an ecstatic Tigers head coach Stan Elliott after the match. “That’s just everything you want in sports, right there. I’m just so proud of these girls and their effort.”

The winning goal came in the first “golden goal” five-minute period. Midfielder Julia Chesson worked the ball out of a crowd near the circle and sent it ahead to Schmidt. The junior sped past the Bearcats' backline, leaving only goalkeeper Emma Cannon to beat. Schmidt veered to her right as Cannon charged the play, leaving an open net for the winner, which set up a dog pile of jubilant players near the Bearcats' 18-yard box.

Taking advantage of the Tigers' speed at the top against Hendersonville, the breakaway was one of several by Foard in the match, which included a two-on-keeper chance in the 28th minute. Schmidt had an earlier chance along the right side just prior to the end of the first overtime. Her shot from 15 yards out was snatched by an onrushing Cannon at point-blank range. Samaria Tipps was especially active, as she was able to split the defense easily for five different scoring opportunities. Her cleanest shot was a rising blast from the top right corner of the box, which Cannon leaped to catch in the 85th minute.

“It was intense,” said Schmidt. “I did get upset because we had so many shots and we weren’t able to finish. I knew we had it in us, and all of the girls were so supportive and kept us going the whole game.”

Elliott said the team quickly solved that the Tigers had the advantage with their speed. “We figured out the over-the-top ball, that they were struggling with that,” explained Elliott. “Our speed up top was the difference. It put them under pressure.”

The effort was especially notable, as the Tigers dressed only three subs for the match, due to injuries and players' involvement in other previously scheduled school activities. It forced the Tigers to shift players throughout the match, with Schmidt helping along the backline, at times, then shifting up front for scoring chances.

“Everybody had to embrace their new roles, as we move forward,” said Elliott. “It just comes down to these players and how proud I am of them. They did what I asked them to do. That’s all you can ask as a coach.”

Statistically, the match set up as a battle of Hendersonville’s offense, which had put 68 goals on net, against a Foard defense that allowed two. For the most part, that battle played out. Unofficially, Hendersonville outshot the Tigers 29-15, put 17 shots on goal to just eight for Foard and had six corner kicks to just one for the home team.

Goalkeeper Alexis Wolgemuth provided a stonewall around the goal with 17 saves, including seven in the first 20 minutes of the second half.

“Alexis is a gamechanger,” Elliott said. “In my opinion, the best in the business right now.”

Wolgemuth’s play sent the opposing players into a state of vexation at times, something that Foard sensed and used to its advantage to shift momentum.

“The previous games of the season,” said Schmidt, “they had scored several goals. I could tell their whole team was separating.”

Elliott agreed with the sense of bewilderment growing among the Bearcats. “We were just throwing things at them that, I don’t know that they’ve seen all year,” Elliott said. “You could tell that they were getting frustrated and we could sense that on the sidelines, and the girls could sense that, too.”

For her part, Wolgemuth’s gave credit to her teammates, especially to Brianna McClough, who, as Elliott mentioned, had a new role, playing her first match as a defender. McClough along with Bianca Tamas at the center back position collapsed effectively as defenders approached within the penalty area. Chloe Sain and Maddie Hetzel on the outside also helped to keep the Bearcats' crossing passes from finding teammates.

“I thought she played amazing,” said Wolgemuth of McClough. “It was her first game on the backline. She just made stop after stop. We just tried to consolidate in and have our wings help with the outside run. I was so impressed, because every time I thought I was going to have to make a save, someone would come out of nowhere. As a goalie, it’s great to have a good backline.”

Hendersonville, ninth-seeded in the West Region, finishes the season with a 12-1-1 record.

The road the St. Stephens baseball team has followed in 2021 has been filled with both thrills and spills. But on Thursday night the Indians s…

St. Stephens faced an uphill climb for most of the Indians’ first-round game in the 3A state baseball playoffs on Tuesday night. But St. Steph…

Indians, others ready for Round 2

Typically, the Hickory Daily Record recognizes the premier high school football players in Catawba County on Super Bowl Sunday. But as has bee…

Foard, St. Stephens wrestling to be fully represented at regionals

The North Carolina Softball Coaches Association revealed its all-district teams for the 2021 high school softball season this week, with playe…

MILLERS CREEK — Fred T. Foard ran into a buzz saw in the opening round of the 2A state baseball playoffs on Tuesday night, losing to West Wilk…

Hoop Shoot winner honored by HPS Board of Education

Fred T. Foard’s Anna Schmidt, 24, goes up against Hendersonville’s Anna Salvaggio, 6, during the opening round of the 2A state playoffs Monday in Newton. Schmidt scored the only goal in the Tigers’ 1-0 victory over the Bearcats.