BOUNCING BACK: Bandys spikers rebound to sweep Newton-Conover
0 comments
Share this
{{featured_button_text}}
1 of 2 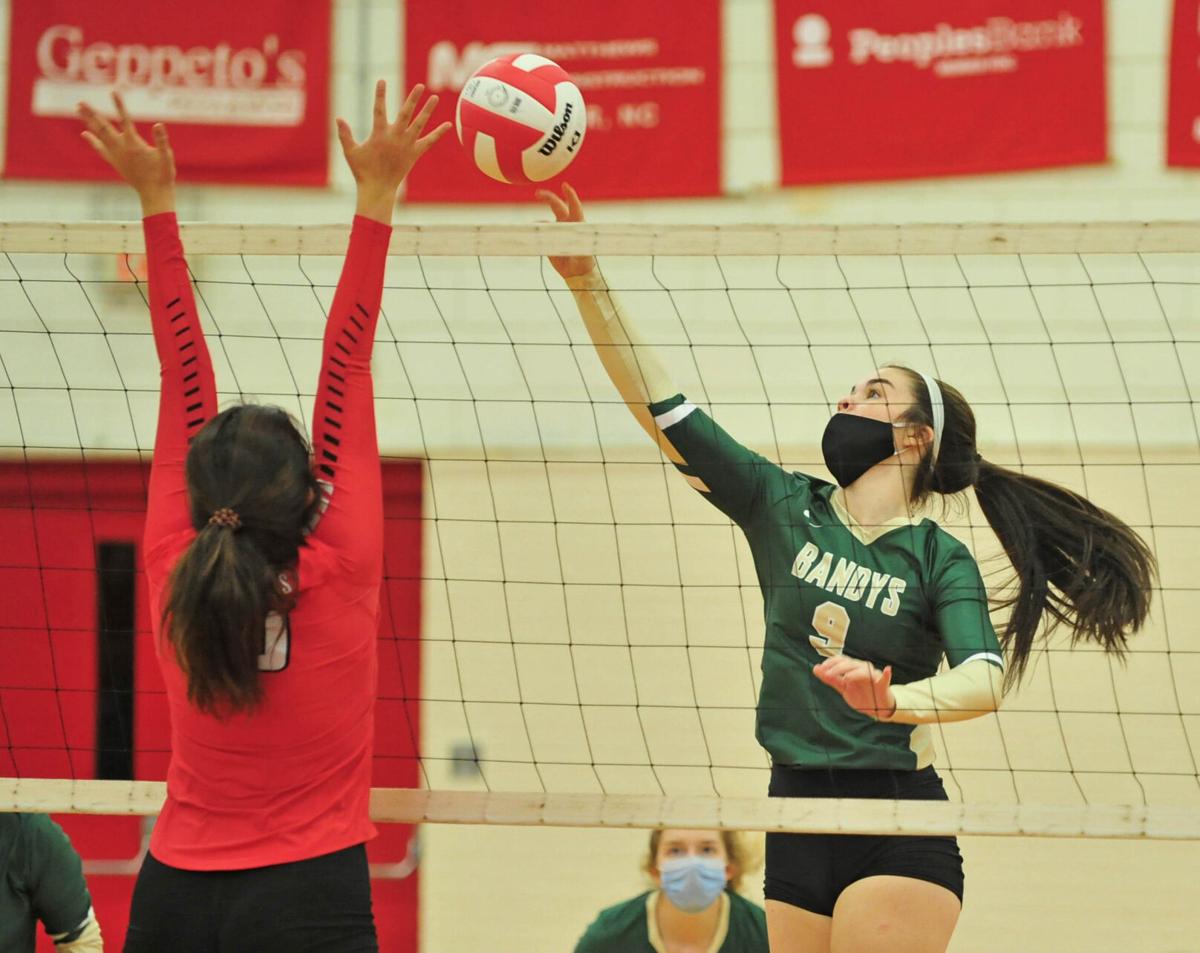 Bandys' Logan Dutka (9) goes up for the tip against Newton-Conover's Emily Jackson (10) Thursday in Newton. 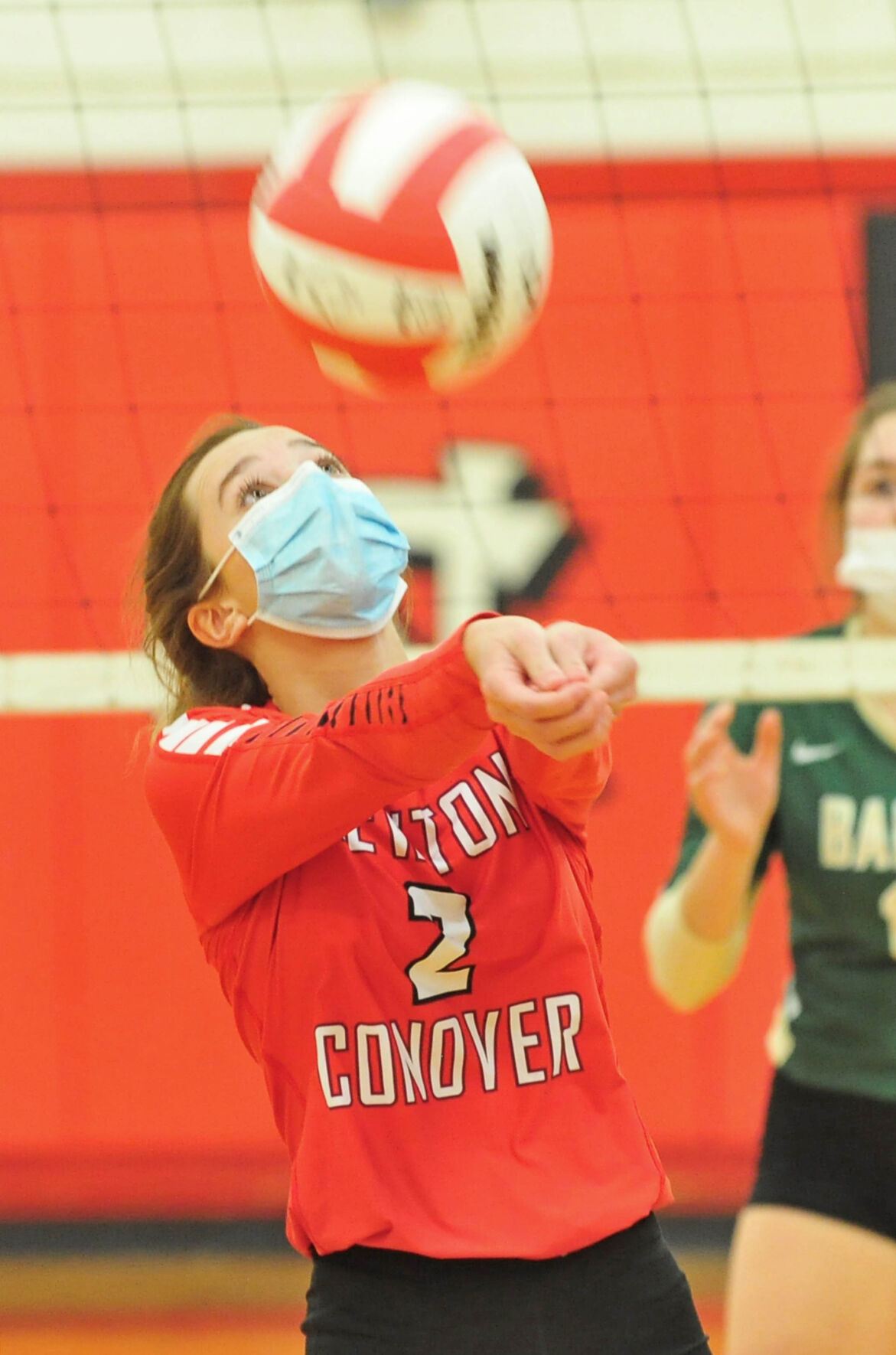 Newton-Conover's Kylie Ewaka (2) has her eye on the ball during a return in the match against Bandys Thursday in Newton.

NEWTON — The Bandys volleyball team didn’t dwell on this week’s previous three-set loss to Maiden to open the season — it learned from it. Thursday night it was the Trojans doing the sweeping with a road win at Newton-Conover by the scores of 25-17, 25-18 and 25-16.

“I’m very, very proud of our girls. We had a very tough loss at home Tuesday against Maiden,” Bandys coach Carlee Belk said. “We spent a lot of time at practice yesterday figuring out ways of improvement. They did a great job today of really focusing on those ways that we needed to improve and playing with passion on the court.”

Bandys took the lead for good in the opening set after a Marty Huggins kill knotted the score at 13-all and put the ball in the hands of Marley Beegle at the service line. Beegle’s serve netted the Trojans five points and they never looked back. Long service runs and playing from in front were themes repeated throughout the match.

“We’ve been working on our passing. It takes a good pass to get everything else going,” Belk said. “But when we get the good pass we have a lot of options on the front row. When we use our options we have more weapons. We used those options way better tonight than we did our first game.”

Bandys’ lead hit eight points before back-to-back aces by Emma Fox drew the Red Devils within five points at 21-16. But that was as close as Newton-Conover could get in the opening set.

“Bandys just outhustled us,” noted Newton-Conover coach Brooke Falowski. “They picked up everything and we just couldn’t put the ball down. We didn’t give them anything they struggled with.”

The Trojans picked up in the second set where they left off in the first and came out swinging. Bailey Reynolds served Bandys to a quick 5-0 lead highlighted by an ace and kill shots from Mya Benfield and Alexis Bolding. That advantage ballooned to 11-1 with Benfield at the service line moments later.

To the Red Devils’ credit, they scratched back and got within two points, 19-17, with Cassidy Geddes serving. But Bolding put an end to that run by Newton-Conover with a slam and Benfield followed that with consecutive kills.

It was another Bolding bomb and one by Marty Huggins that brought the second set to a close, 25-18.

Bandys never trailed and allowed Newton-Conover to draw even just once at 5-all in the third set. The only damper on the night for Bandys came in that third set when Gabby Edwards was serving for the Trojans. From her back row slot, Edwards made a phenomenal diving save of a Newton-Conover shot and hit her head on the hardwood.

Edwards was assisted off the floor and attended to by the Newton Fire Department squad as well as ambulance personnel from Catawba Valley. Belk was visibly concerned about Edwards' injury following the game.

Belk credited her team for not letting up until the final points were scored in any of the three sets.

“It’s easier to play from ahead than it is from behind,” Belk said with a smile. “But I liked that they didn’t become satisfied.”

Belk was also pleased with her team’s serve throughout the game. Hitting on 70 of 75 serves, the Trojans had eight players record aces from the service line as well.

“Our girls have greatly improved in serving just from last year to this year,” Belk said. “We’ve seen what an aggressive serve can do. Tonight, it really showed. We’re being aggressive and we’re keeping it on the court.”

Reynolds was a perfect 20 of 20 with two aces and Hope Clements was 10 of 11 with three aces. Benfield led the Bandys attack with seven kills, while Hannah Byrd, Beegle and Bolding each had four.

“We’re running a little bit different defense than we’ve run in the past, changing some things up, coverages — just working some things out,” said Belk. “I think we saw tonight it can be very successful. But we still have a lot to master.”

Fox was seven of 10 serving with three aces for Newton-Conover, while Kylie Ewaka was 10 of 11 and Jaelyn Swagger hit on nine of 10 serves. Geddes had a team-high eight kills and Swagger added five.

“We got in a rut,” Falowski said of the Red Devils' penchant for allowing long service runs. “We’re going to practice when we get stuck in certain rotations how to get out of that rotation.”

Both teams are now 1-1 overall and 1-1 in the South Fork 2A Conference. Bandys will host Lincolnton on Monday and East Lincoln on Tuesday, while Newton-Conover will play at West Lincoln on Monday before hosting Lake Norman Charter on Tuesday.

Ryheem Craig wasn’t going to let anyone stop him from becoming a Division I football player. And no offensive line can seem to stop Alexander …

Entering 2020, no volleyball player for the University Christian High School Barracudas had ever been named to the North Carolina Independent …

WEEKLY WATCH: Lighter week ahead, but still plenty on tap

It’s week three of volleyball and cross country, as the students return from Thanksgiving break. Unfortunately, the story for this week is as …

CATAWBA — Following a three-set loss to Maiden in its season opener, the Bandys volleyball team swept Newton-Conover in a hard-fought match fo…

Hickory High’s volleyball team dominated from the start and overwhelmed crosstown rival St. Stephens in a 3-0 road sweep during a Northwestern…

The Bandys cross country team faced off against fellow South Fork 2A Conference squads Newton-Conover, East Lincoln and Lincolnton during the …

The Fred T. Foard volleyball team kept its early-season success going with a road win over Hibriten on Monday in Lenoir. After winning 25-3 in…

The Fred T. Foard volleyball team dominated West Caldwell on Tuesday at home for its 15th victory in a row dating back to last season, winning…

Bandys' Logan Dutka (9) goes up for the tip against Newton-Conover's Emily Jackson (10) Thursday in Newton.

Newton-Conover's Kylie Ewaka (2) has her eye on the ball during a return in the match against Bandys Thursday in Newton.