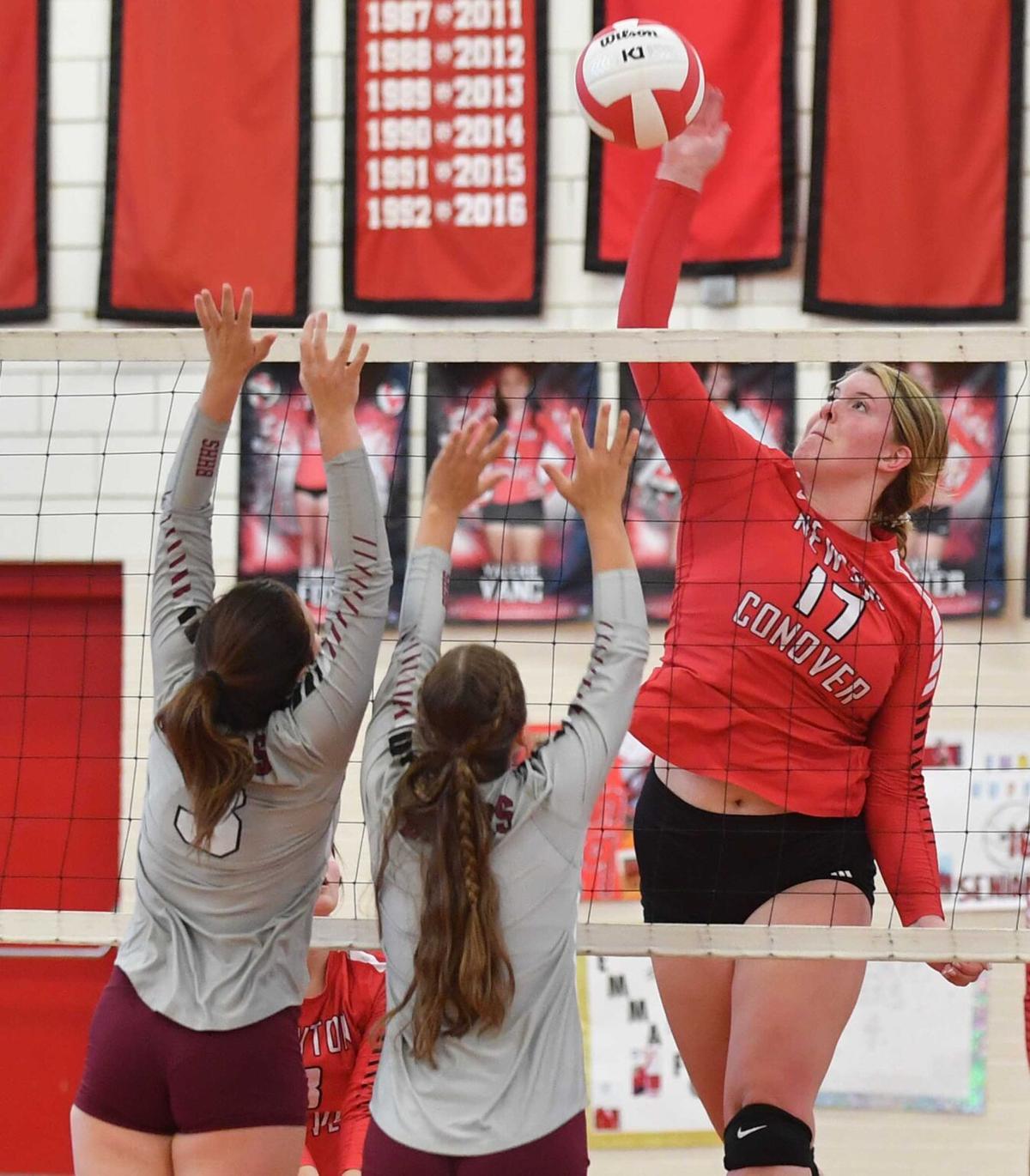 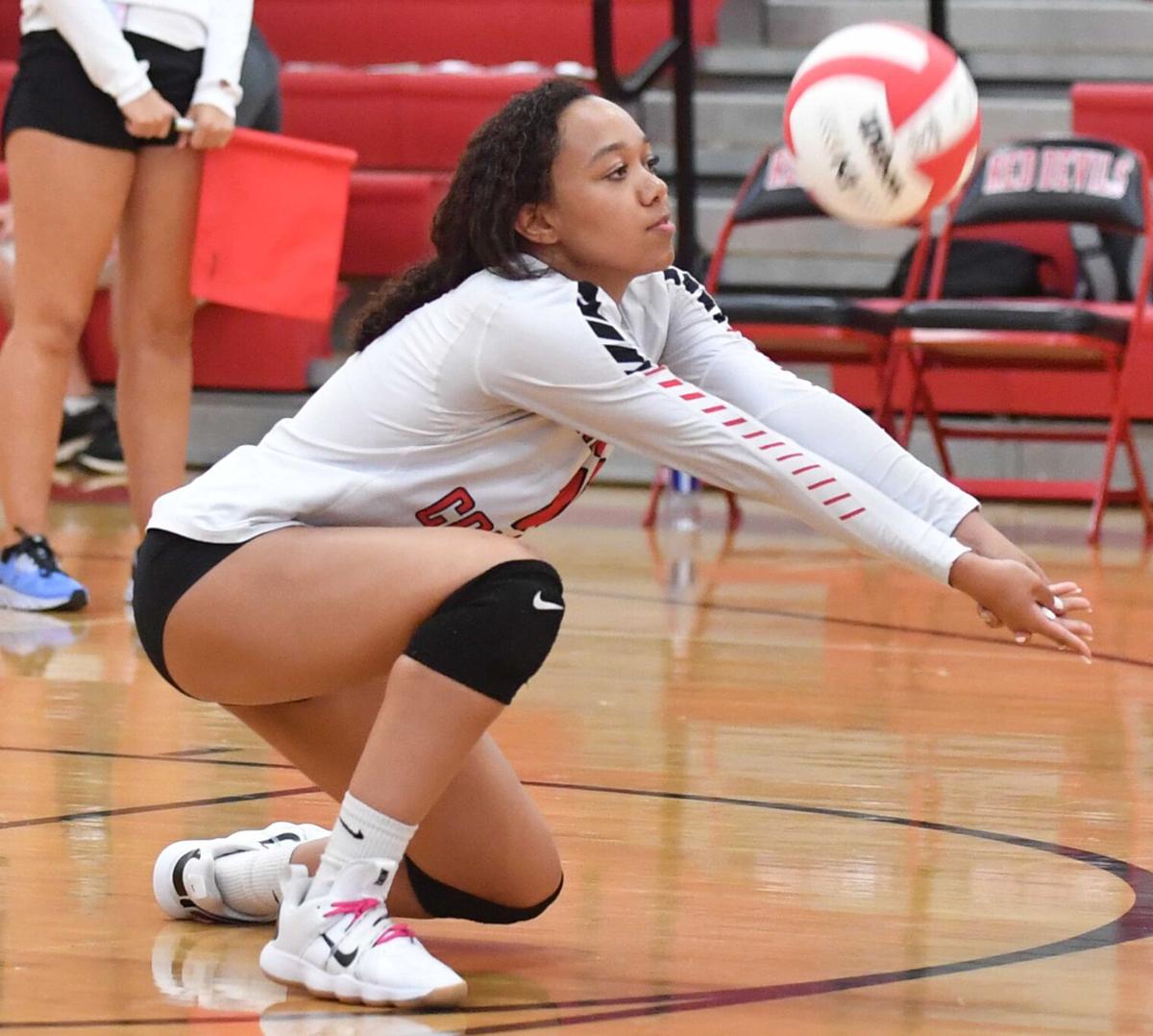 Newton-Conover’s Allyah Reid, 19, gets low to make a return during the match against Bunker Hill Tuesday in Newton.

NEWTON — Tuesday was Senior Night for the Newton-Conover volleyball program and the stars came out to shine for the Red Devils in a three-set victory over Bunker Hill. Newton-Conover won by set scores of 25-18, 25-17 and 25-22.

That victory, in tandem with a five-set decision at Bunker Hill earlier in the season, gives Newton-Conover a sweep in the season series as well. It also snaps a two-match losing streak for the Red Devils.

“It was really, really fun. We’ve been working hard all season to improve and get better,” said Newton-Conover coach Abigail Dowell. “I’m really, really proud of them.”

The opening salvo in in the first set certainly didn’t bode well for the Red Devils. The Bears roared out to lead 9-1 behind two aces from Allie Sigmon and another on the service turn of Samantha Hawn.

Sigmon also had a nice back row kill and Makenzie McConnell delivered another big hit for a point in the run. However, that was the first and last time Bunker Hill would have a lead on the scoreboard.

“We started off pretty strong, had really good coverage. We were playing smart,” said Bunker Hill coach Kelsey Dettman. “Then we let a couple of mistakes kind of get in our heads. Then we just were never able to recover from that.”

The Red Devils kept chipping away at the Bears’ lead and finally tied them at 15-all. Although a Sigmon kill briefly returned the advantage to Bunker Hill, a kill by Sydney Stewart retied the score and another by Emma Huffman put Newton-Conover in front to stay.

Emma Fox then began finding the range with her cannon of a right arm, while Cassidy Geddes sliced and diced the Bears’ defense with some lasers of her own for the win.

“I always say, ‘Don’t waste the first set,’” said Dowell. “That’s not a practice set. You have to win that first set to start off strong and kill it through the end.”

That is exactly what the Red Devils accomplished after the initial come-from-behind win in the first set.

In the second set, Newton-Conover jumped out in front 6-0 on Katie Foster’s service turn that included an ace, one of nine on the night for the Red Devils. Although Bunker Hill got within two points on three occasions, the final time at 12-10, the Bears could never draw even.

Huffman delivered the set-winner on a well-placed shot for a 2-0 advantage for the Red Devils.

“Our serves weren’t real consistent, which makes it difficult to get a run going,” said Dettman. “Just a lack of communication, lack of good defense. We normally have really good defense and are kind of all over the place. We just didn’t have that tonight.”

The Red Devils didn’t have that problem with their attack led by Fox, Huffman, Stewart and Geddes. Led by Fox’s eight unofficial kills and three blocks for points, that quartet totaled 20 kills for the Newton-Conover offense.

“Passing is key. We can’t do anything without the passes,” said Dowell. “Allyah (Reid), we’re definitely going to miss her next year.”

After the 25-17 win in the second set, the Red Devils stretched an early 4-0 lead into a 19-9 cushion in the third set. To the Bears’ credit, they didn’t fold and fought their way back to just a 24-22 deficit and held the serve. But Emma Smith delivered the match-winner on a kill.

The win lifted Newton-Conover to a record of 9-7 overall and 8-5 in Catawba Valley 2A Conference play.

“We’re super excited for our game against Maiden,” Dowell said of Thursday's regular-season finale. “We’re going to do our best to try and beat them too.”

That match is a home date with the league-leading Blue Devils.

Bunker Hill is now 7-11 overall and 6-7 in league contests. The Bears will be on the road Thursday in a rivalry match at Bandys.

Caley Powell led the Bears with four kills, while Allie and Alaney Sigmon each had three.

Note: Newton-Conover has five seniors on its team, including Huffman, Fox, Foster, Reid and Valerie Vang.

Bunker Hill gets back in win column at Newton-Conover

BUYING IN: Hickory continues turnaround season with 64-14 rout of Foard

Six and a half months ago, the Hickory football team walked off the field to end the COVID-shortened spring season. The Red Tornadoes hadn’t w…

NEWTON — For the second time this season, the Fred T. Foard volleyball team had a double-digit winning streak snapped by North Iredell. The la…

The end of the 2021 high school football regular season is approaching, and all 11 teams in the Hickory Daily Record‘s coverage area spanning …

The North Carolina High School Athletic Association released the brackets for the state volleyball playoffs on Thursday, with six teams from t…

Newton-Conover’s Allyah Reid, 19, gets low to make a return during the match against Bunker Hill Tuesday in Newton.