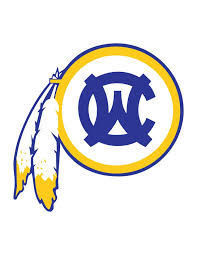 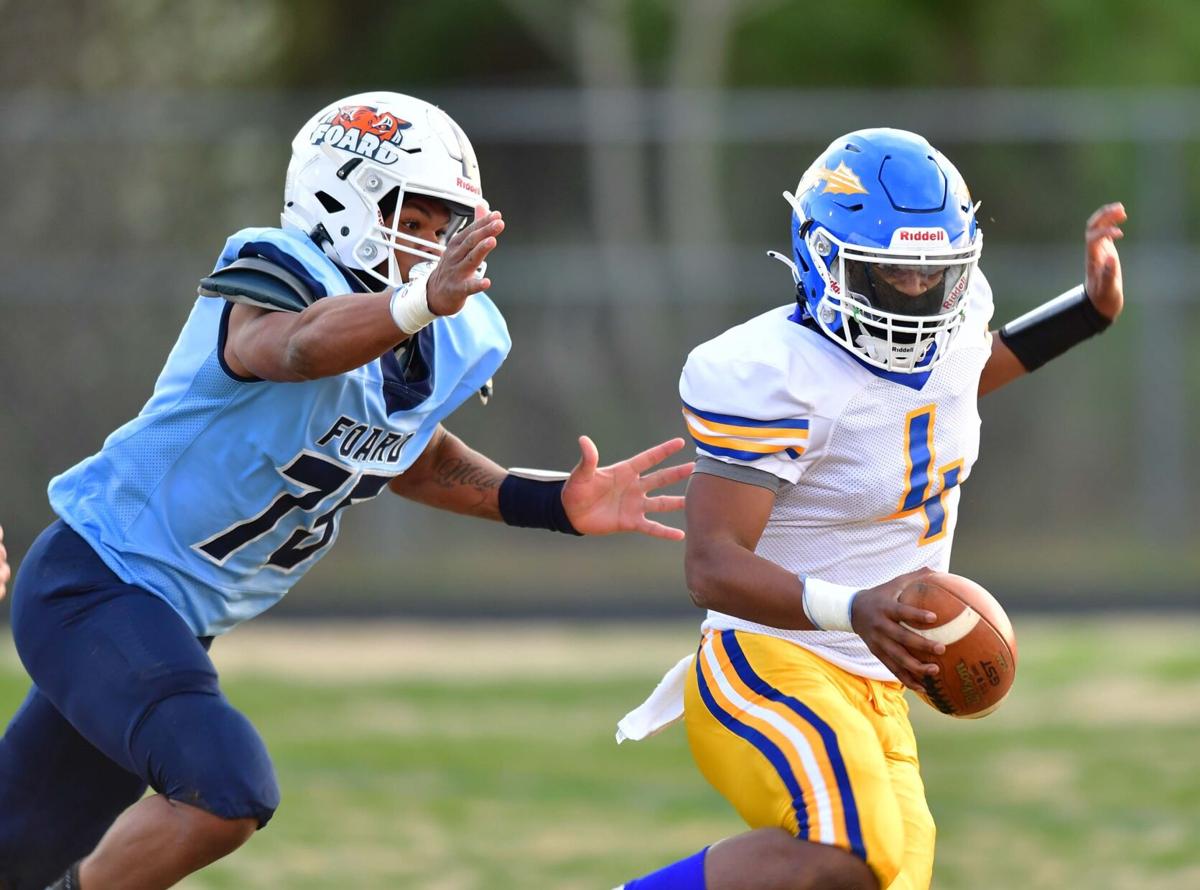 West Caldwell’s Jaylen Patterson, 4, scrambles to get away from Fred T. Foard’s Mo McAfee, 75, in a file photo from this past spring. 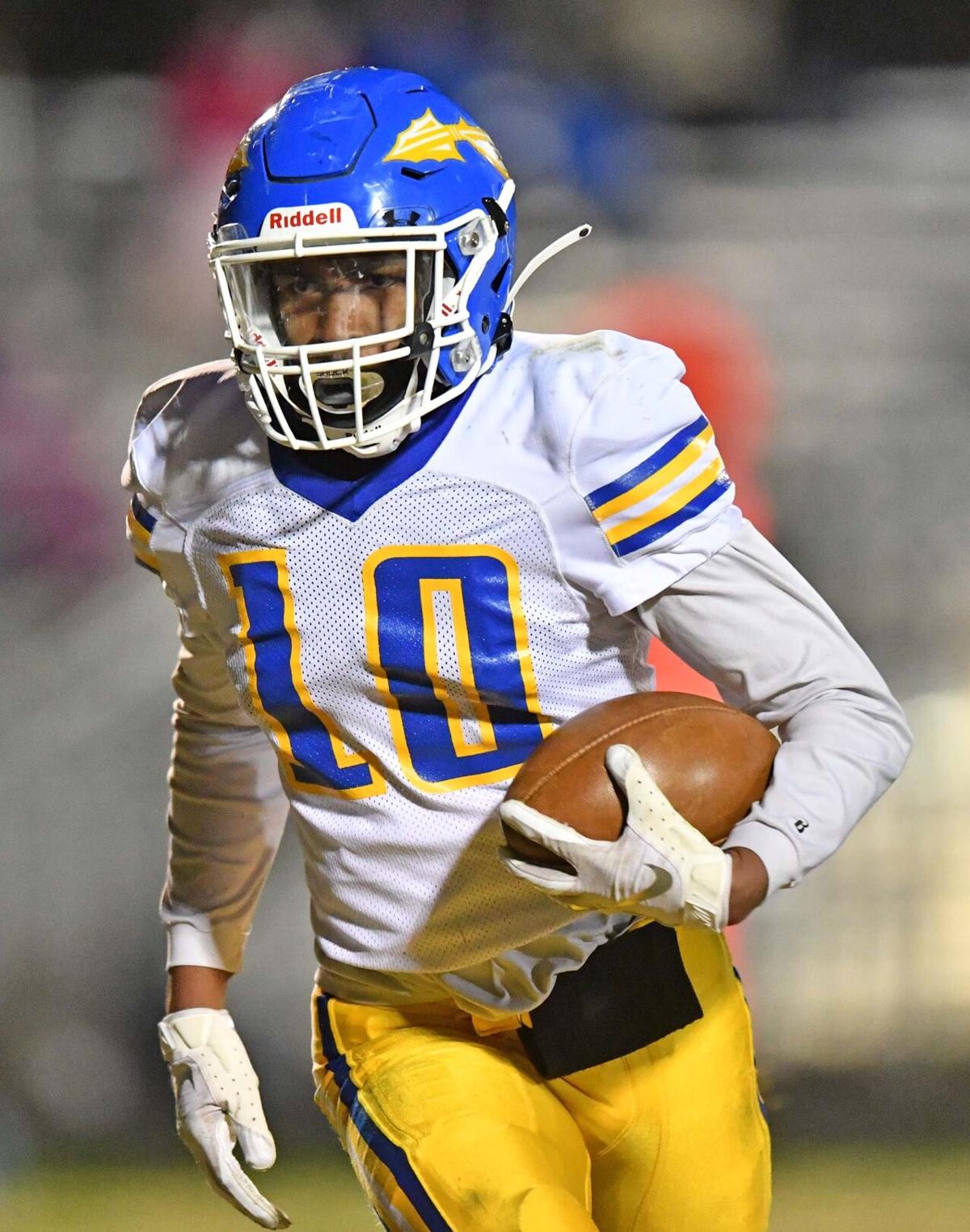 LENOIR — There is no mistaking head coach Monte Simmons’ feelings about his team and the upcoming 2021 football season. After going 3-4 this past spring including a three-game midseason winning streak during his first season in charge of the Warriors, Simmons’ enthusiasm and excitement for the 2021 fall campaign is undeniable, palpable and contagious.

“Their slogan is ‘all in,’” Simmons said about the Warriors. “Every game is important. Everybody is all in in getting this thing turned around.”

The program hasn’t qualified for the playoffs since 2017 and hasn’t finished a season with a mark over .500 since 2016. Yet the numbers are pointing up with 58 on the roster this fall compared to 33 this past spring.

“The biggest thing is jelling,” Simmons said regarding the most important hurdle his team faces. He noted the delayed season in 2020 from the fall to the spring and all the COVID-19 related hoops made survival the past year’s primary priority.

Defense was the staple of the Warriors during the 2020-21 season. Taking away a Week 2 loss to powerhouse Hibriten and a defeat at the hands of Bunker Hill in the season finale, West Caldwell gave up less than 20 points in four of their other five contests and just 21 points in the remaining game. The Warriors’ defense also recorded a shutout.

Senior middle linebacker Cameron Beaver returns to set the tone for West Caldwell on that side of the ball. The 6-foot-1, 210-pounder is the squad’s top returning tackler with 41 tackles, 21 of which were solo stops.

The Warriors will stick with a 3-5 base, utilizing “run blitzes where they normally don’t come,” stated Simmons.

“Last year our defense was pretty stout,” Simmons said, noting that side of the line of scrimmage is more about reaction as compared to the offense. “Right now, our offense is catching up with the defense.”

The good news for Simmons and the Warriors is that they bring back most of the performers they relied on last year, led by junior quarterback Jaylen Patterson.

This past spring Patterson completed 62 of 121 passing attempts for 902 yards. He threw eight touchdown passes compared to five interceptions with a quarterback rating of 82.7.

“Jaylen is a junior. He does a good job of managing the team,” Simmons said. “He works hard and if he continues to run the team, we’ll be okay.”

Beaver is the top ground gainer back for West Caldwell. He averaged over 4 yards per carry last season and crossed the goal line four times.

Kayvin Felder, a part-time running back and part-time wide receiver, caught 12 passes for 176 yards and a touchdown. He’s an even 6-feet and 161 pounds. Mason Anthony, also a junior, nearly matched Felder’s numbers. He hauled in 12 passes, three for scores, for a total of 173 yards. The lanky wideout stands 6-foot-4 and weighs 160 pounds.

But there’s more for the Warriors’ faithful to get excited about, according to Simmons, who cited sophomore wide receiver Christopher Gibbs, wide receiver Ty Schuler, junior slot and free safety Kobie Morrison and senior wide receiver and outside linebacker Derek Campbell.

“The whole team is a surprise,” Simmons said, noting he’s been impressed with the overall athleticism of his squad. “They’ve done a great job getting ready.”

But there is no question that West Caldwell will need to show some significant improvement on the offensive side of the ball. Like last season, the Warriors will run a spread offense predicated on the zone read. The Warriors averaged just over 15 points a game last spring and less than 200 yards. The running game needs to take a step forward after averaging only 62.3 yards per contest.

While the Warriors seem to have athletes to utilize at the skill positions, they won’t have tremendous size in the trenches, nor will they have an abundance of depth there.

West Caldwell will line up in the Catawba Valley 2A Conference along with Newton-Conover, Bunker Hill, Maiden, Lincolnton, West Lincoln, Bandys and East Burke. The Warriors’ nonconference slate includes the opener at cross-county rival South Caldwell, a road trip to R-S Central and a home date with Hibriten.

West Caldwell’s Jaylen Patterson, 4, scrambles to get away from Fred T. Foard’s Mo McAfee, 75, in a file photo from this past spring.