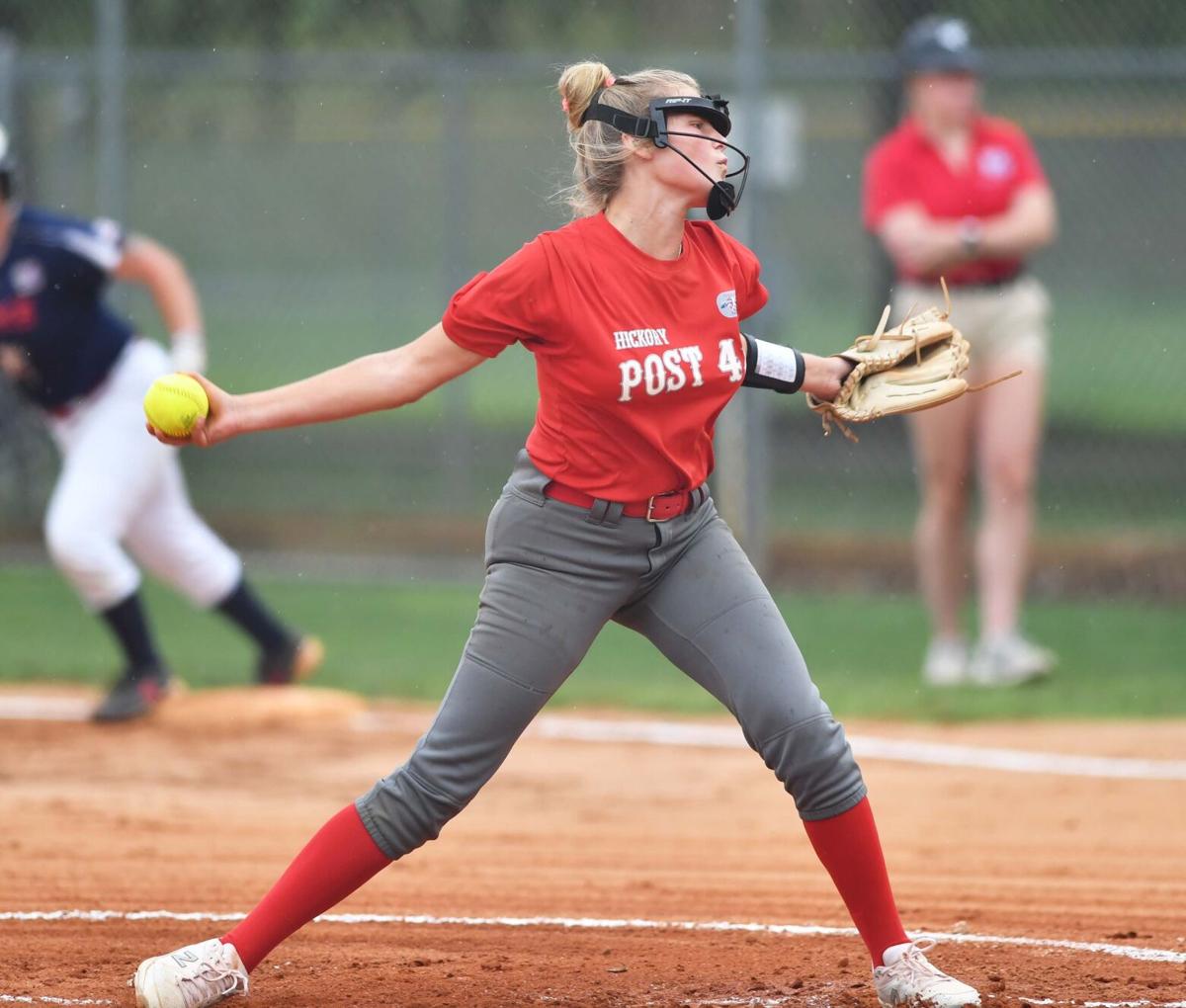 Hickory Post 48’s Mayson Lail, 10, stretches out to release a pitch early in the Area IV opening-round playoff game against Burke County Post 21 on Monday in Morganton. Lail allowed one run on five hits with four strikeouts, two walks and a hit batsman in a complete-game performance. 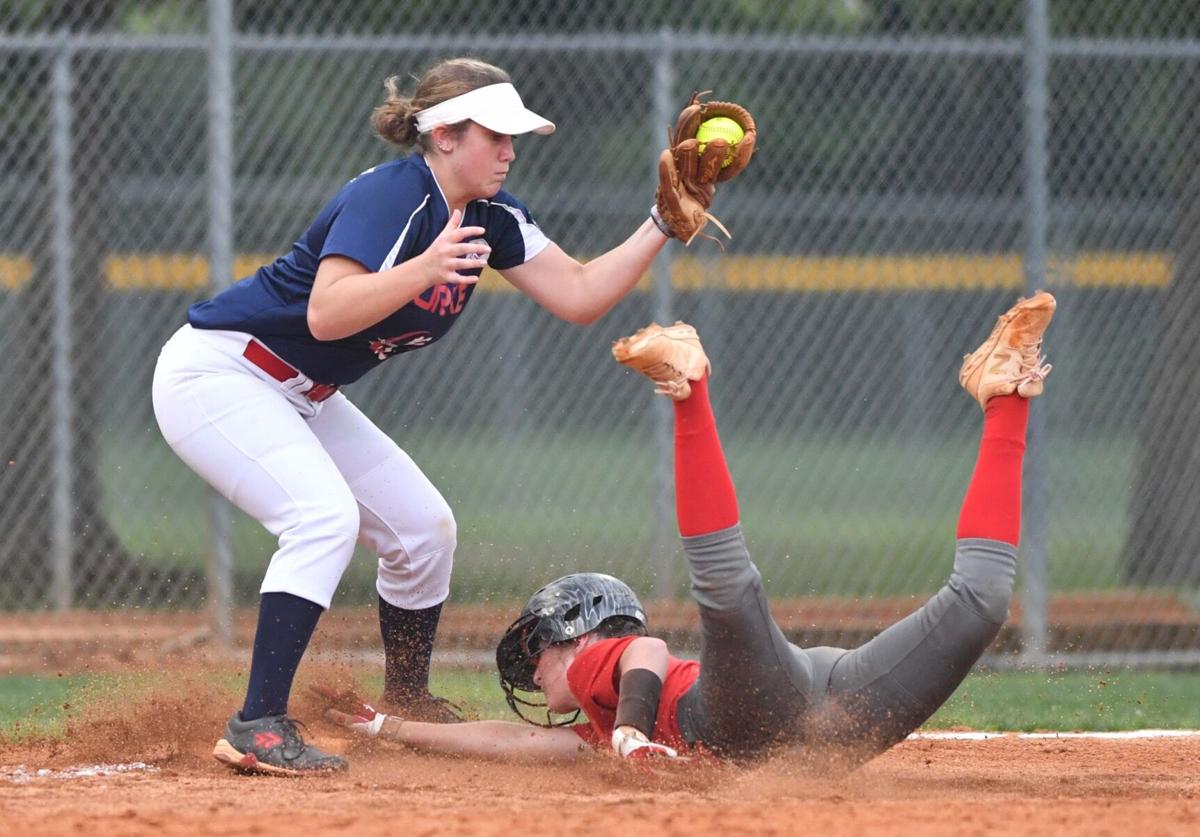 Hickory Post 48’s Macey Pennell, 3, slides safely into base after hitting a two-run triple in the third inning.

MORGANTON — A light rain during the first few innings of the Area IV Senior Legion softball playoff opener between Hickory Post 48 and Burke County Post 21 did nothing to dampen the efforts or enthusiasm of the girls from Post 48. Hickory hit the trifecta of strong pitching, sterling defense and timely hitting to down Post 21 by the score of 6-1 on Monday night at Catawba Meadows Park.

“We’re starting to jell. I told the girls, especially in these seven-inning games, I need you to buy into team because they’re all used to being all-stars on their teams and this is a county all-star team,” said Post 48 coach Todd Smith. “As long as we keep that camaraderie and cohesion, I think we’re going to be tough to beat.”

Hickory, the No. 3 seed in the Eastern Division, is now 14-7. Meanwhile, Burke finishes the season at 10-7 after earning the Western Division's No. 2 seed.

The game was scoreless through the first two innings as the pitchers, Hickory’s Mayson Lail and Burke’s Elle Tanner, were both effective. Lail got strong defensive plays in the bottom of the second from Jada Spake at the hot corner and shortstop Addie Wray.

But Post 48's bats came alive in the top of the third. Lail came through with the game’s first hit, a single to left, to open Hickory’s half of the frame. Spake worked a walk from Tanner and Wray moved both runners up with a groundout to first.

An infield single by Avery Alexander plated the first Hickory run and Zoey Boston drove in the second with a sacrifice fly to center. With two on and two out, Macey Pennell laced a laser into the left-field corner for a triple and two more runs to put Post 48 up 4-0.

It was the first of three hits on the night for Pennell, who also doubled and singled.

“We had some good timely hits,” Smith said. “Macey Pennell had a big night for us.”

The four runs were more than enough for Lail, who set down 10 straight Burke batters.

“Mayson came up big right there, kept them off-balance, and we made some good plays behind her,” Smith said. “She did a good job hitting her spots.”

Then with one out in the bottom half of the fourth and Post 21 still looking for its first hit, an unusual play put Burke on the scoreboard. Left-handed hitting Ashlyn Castle lifted a deep fly to right. The Hickory outfielder drifted back to the fence and reached up, only to have the ball glance off the top of her glove to the top of the fence and over for a home run.

Lail worked out of tough spots in both the fifth and sixth innings. Burke put runners on second and third with two outs in the fifth, but Lail induced a groundout to short to retire Post 21. In the sixth, Burke loaded the bases with one out thanks to singles by Castle and Regan Winkler sandwiched around a walk.

Again, Lail and her defense were up to the challenge. Alexander raced in to catch a fly ball in shallow center for the second out and hold all the runners. Then Lail reached down and came up with a big strikeout to thwart Burke again.

“That was a big inning for us,” Smith said. “That was a total team effort right there.”

Hickory added two insurance runs in the seventh on back-to-back two-out doubles by Pennell and Caroline McIntosh followed by an infield single by Kayla Hollar that drove in McIntosh all the way from second with the final Hickory run.

Castle was the lone Burke player with more than one hit.

Hickory will face the winner of tonight's game between West No. 1 Rutherford Post 423 and East No. 4 Lincoln Post 30 in Wednesday's semifinal round. The game between Rutherford and Lincoln was originally scheduled for Monday but was postponed due to rain.

A day after the Hickory Crawdads wrapped up the final homestand of the season, the team released its schedule for the 2022 season.

Hickory Post 48’s Mayson Lail, 10, stretches out to release a pitch early in the Area IV opening-round playoff game against Burke County Post 21 on Monday in Morganton. Lail allowed one run on five hits with four strikeouts, two walks and a hit batsman in a complete-game performance.

Hickory Post 48’s Macey Pennell, 3, slides safely into base after hitting a two-run triple in the third inning.