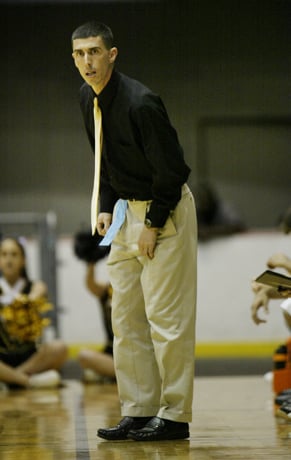 Former Concord High School head basketball coach Andy Poplin during a playoff game in 2006. Poplin will be the new coach at Hickory High. 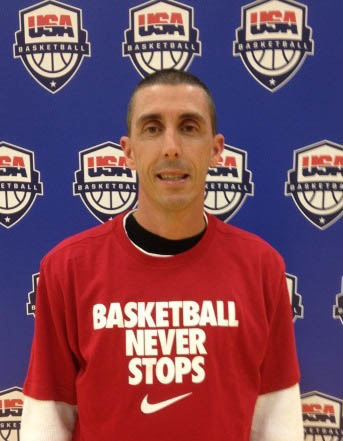 A news release on Monday night from the Hickory Public Schools said a teaching contract for Poplin -- who coached a state 3A title team at Concord in 2007 -- was approved by the school system’s board of education.

Poplin fills a position vacated by the retirement of Lavell Hall. Hall coached the Red Tornadoes last season, taking over for a pre-determined one season period after former head coach Shawn Johnson was indicted by a Catawba Country grand jury last August with five counts of indecent liberties with a student.

Poplin, 42, has served as a head varsity coach at two Cabarrus County schools, first at Mount Pleasant (1994 through 2003) and then four seasons at Concord. He resigned after the 2007 season, after acknowledging two North Carolina High School Athletic Association (NCHSAA) rules governing working with players out of season were violated.

“I am thrilled to get the opportunity to return to Hickory… Hickory High was always a dream destination for me,” Poplin said in the news release. “I hope to bring my unique and innovative approach and mindset to coaching, training, educating and inspiring the young players in Hickory.

“I love to use basketball as a vehicle to motivate and inspire young people to reach their potential as a player, but more importantly as a person.”

Poplin has been a basketball clinic speaker at Charlotte and North Carolina and an Amateur Athletic Union Junior Olympic coach since 1992. Since 2005, he has coached the Chris Paul All-Stars. He coached the 2013 Chris Paul national travel team in the Nike Elite Youth Basketball League and guided the team last week in a competition in Los Angeles.

Poplin was an assistant coach at West Caldwell in 1992-93, the news release said.

At HHS, Poplin will guide a program that has posted nine straight winning seasons and won at least 22 games in each of the last six seasons.

After losing to Hunter Huss in the West 3A Regional title game in 2010-2011 under Johnson, the Red Tornadoes reached the state 3A championship game the next season. Beaten by Rocky Mount in the state final, Hickory finished 28-4.

Hall, a former Lincolnton head coach and Appalachian State assistant, agreed to then coach the Red Tornadoes for one season. He guided them to a 9-3 record and second place tie in the Northwestern 3A-4A last season and 22-7 overall record. Fred T. Foard eliminated HHS in the second round of the state playoffs.

“My goal throughout the process was to find just the right fit for our players,” HHS principal Dr. Ann Stalnaker said the news release. “Coach Poplin has the energy and passion for basketball to motivate our young men’s efforts on the court and in the classroom.

“We are thrilled to have him join our team at Hickory High.”

Are the Green Bay Packers pretenders?

Sunday’s Hickory Crawdads season finale against the Rome Braves in Georgia was canceled due to an COVID-19 outbreak on the Crawdads.

The high school football schedule has been in a state of flux all throughout the 2021 season, which kicked off on Aug. 20. All 11 varsity team…

NEWTON — Fans packed Fred T. Foard’s Jerry Copas Gym on Wednesday night for a battle between the top two 3A volleyball teams in the state acco…

History was made last Saturday at Hickory Motor Speedway, as the track hosted Napa Auto Parts Championship Night to finish the 2021 regular se…

With the start of the Northwestern 3A/4A Conference season in football this week, leagues in all sports are fully engaged in the quest to dete…

Landon Dickerson made his NFL debut during the Philadelphia Eagles’ 17-11 home loss to the San Francisco 49ers last Sunday, taking 33 snaps at…

Former Concord High School head basketball coach Andy Poplin during a playoff game in 2006. Poplin will be the new coach at Hickory High.