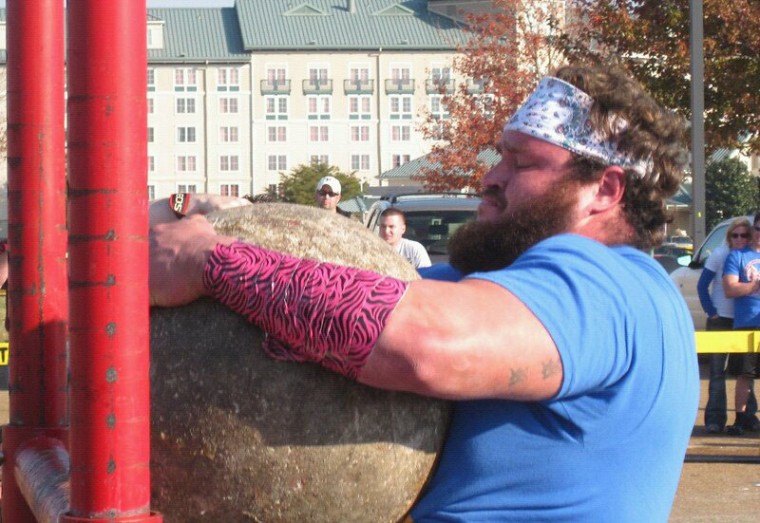 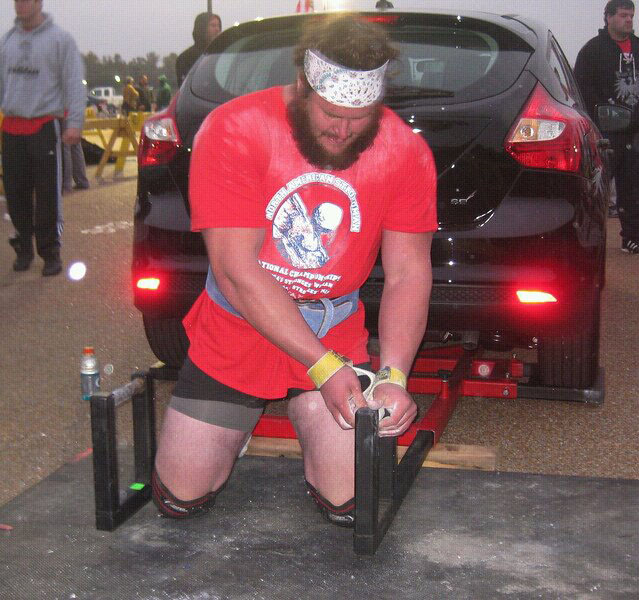 Adam Scherr prepare himself to lift the rear of a car during the North America Strongman competition in Tunica, Miss. Scherr went on the win the event and earn his Strongman Pro Card. 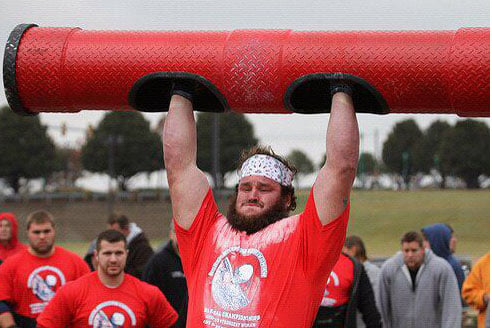 Adam Scherr of Sherrills Ford won the title of North America's Amateur Strongman Champion during an event held in November in Tunica, Miss. Scherr is currently preparing for the Arnold Classic in Columbus, Ohio.

So just how strong do you think you are?

Some of the strongest NFL and college football players bench press around 475 pounds. Sounds pretty strong, doesn’t it?

For one Sherrills Ford man, that’s simply a warm-up weight.

Adam Scherr, a 28-year-old who is 6-foot-8 and weighs 405 pounds, not only bench presses on a regular basis but he lifts things like stone boulders and even automobiles.

So why lift such things, some of which weigh as much as 1,500 pounds?

Because it has become Scherr’s focus when he isn’t at his day job, spent repairing cars at The Pit Stop near Denver, N.C.

After graduating from and playing offensive tackle for Bandys High in 2001, Scherr played semi-pro football for the Hickory Hornets from 2003 through 2007.

He was also just another big man working at a night club in Charlotte when his current training partner, David Hansen, walked into the club in 2008.

“David came into the club one day and said ‘Dude, you’re really big’ or something like that, and asked what did I do (for a living)?” Scherr said. “I told him that I just mostly worked, and he asked if I had ever watched Strongman competitions on television.

“And I told him that I thought they were awesome.”

Hansen asked Scherr if he’d like to give it a try, and Scherr accepted.

Hansen, who is 26 and a big man himself (6-2, 350), had been involved in Strongman competitions for about a year when he met Scherr.

“Another professional strongman, Brad Dunn, and I were working in downtown Charlotte and Adam was working at a club adjacent to us,” Hansen said. “When we saw him, we thought ‘This guy is absolutely enormous’ but he didn’t just look big, he looked athletic as well.

“So we talked to him and asked him why he wasn’t doing anything with himself and obviously he was interested in it so he ended up coming and doing some training and eventually started competing.”

Scherr advanced rapidly. In the North American Nationals in Tunica, Miss. in November, he won the competition and the title of North America’s Amateur Strongman Champion, defeating 65 competitors.

To get to that point, he had to endure a lot of training and a very unusual diet regimen.

“I always thought I was strong,” Scherr said. “Then after my first competition I realized what strong is.”

Scherr works out at least three hours a day and six days a week, normally at Physique & Fitness Center in Denver.

“Then I do a lot of my event training either at my house or at a gym called Brutal Iron in Rock Hill, S.C. They have a lot of strongman equipment set up on the inside.”

To endure those kinds of workouts and still maintain his weight, his diet is unusual.

“Then I usually eat one meal a day of junk food like a fast food meal.”

Scherr said a typical meal might be a triple Whopper with cheese combo with two or three double cheeseburgers at the Burger King adjacent to his job.

“That’s probably one of the hardest things about this,” Scherr said. “(For me), the amounts of food I have to consume just to maintain and keep my body healthier and growing with my training.”

Scherr said when he started the sport he weighed around 300 pounds. He is now typically closer to 405.

When he won in Tunica, Miss., Scherr earned his professional card, and he’ll next compete in the Arnold Classic in Columbus, Ohio, the first week in March.

“I’m able to compete in the Arnold Amateur Championship because I haven’t competed as a pro yet,” Scherr said. “This show is huge. It has like a quarter of a million people come through the convention center.”

If Scherr wins that competition, he’ll move on to the International Worlds in Europe later in the year.

He has plenty of support.

“I’ve had some amazing support,” Scherr said. “My boss, Tom Freeman, has been a huge help to me. He allows me time off when I need it, and for the last 10 years that I’ve worked there, he’s bought my breakfast and lunch every day.”

Freeman said Scherr was actually the first employee he hired when he opened his business 10 years ago.

“Adam was working at Denver Tire and had just graduated from high school,” said Freeman, who calls Scherr ‘The World’s Strongest Mechanic’.

“Naturally, he was a good size fellow then and he’s stuck with me through the years, even when times weren’t so good. He got bigger as time went on.

“Adam’s been a dedicated employee for me for 10 years, so I don’t have a problem supporting him with time off when he needs it for his Strongman endeavors.

“I believe you have to let a person try to better themselves if possible, and Adam is a good person.”

Freeman says Scherr has a lot of friends and he can’t really think of anybody that dislikes him.

“Even though he’s big and could intimidate some people, his personality is really likeable and he’s not a mean person by any means,” Freeman said. “He’s pretty level-headed, honest and a hard worker.”

As for purchasing breakfast and lunch, Freeman says he does that for all his employees to help them out financially and to have them at the shop if they’re needed.

He laughingly said he usually gets Scherr two meals.

Another one of Scherr’s big supporters is his dad, former Howard’s Furniture-Western Steer slo-pitch softball star Rick “The Crusher” Scherr, who is 6-6 and 320 pounds.

The Crusher is a member of the Amateur Softball Association (ASA) Softball Hall of Fame. He hit more than 4,000 home runs and won four national titles on a well-known team that was owned by the late Richard Howard.

“At first, I felt like it was kind of a burden with such a giant shadow cast on me to just try and get out of his shadow basically,” Adam Scherr said of his dad. “Everything my dad has done for me has been such an inspiration, because he won’t ever take no for an answer.

“And in anything I’ve ever tried to do, he just pushes and pushes to make sure that I succeed.

“He’s at a loss for words now at the level that I’ve gotten to so fast, because I’ve only been involved in the sport for about two years.

“He was such a fierce competitor on the ball field, so just having his genetics and the great traits that he had as a tough competitor has translated to me.”

“I’ve contacted them about getting in and helping with getting strength and agility programs worked up for local high school and collegiate athletes,” Scherr said. “I just want to provide my knowledge and everything from strongman because it’s such functional training and anybody can do all the events.

“Not necessarily the ridiculous amount of weight but everything is always lowerable.

“It’s just a way of training that most people don’t do, but it’s fun.”

The best close-up look at Scherr in competition comes March 17 at the First Annual Hanging with the Pros at the ZX Fitness Center in Charlotte. The event will begin at 10 a.m.

Will the Houston Texans be the worst team in the NFL at the end of the season?

Stay away from Justin Herbert's passing yards Prop at 4,550.5

Stay away from Justin Herbert's passing yards Prop at 4,550.5

Should Cade Cunningham be the #1 pick in the NBA draft?

Should Cade Cunningham be the #1 pick in the NBA draft?

Hot or Not: USA Basketball proved with win over Iran they will win gold?

Hot or Not: USA Basketball proved with win over Iran they will win gold?

Simone Biles says she withdrew from final to protect team, self; plus more from Tokyo

Simone Biles says she withdrew from the Olympics gymnastics team final because she wasn't in the right headspace to compete. Here's the latest.

With Simone Biles out, Russians win gymnastics gold over US

The Russian Olympic Committee has won the gold medal in women’s gymnastics after U.S. star Simone Biles exited with a medical issue.

NASCAR's DiBenedetto to be at Hickory Motor Speedway tonight

For the first time since 2004, the U.S. men’s basketball team has lost in the Olympics, falling to France 83-76. Here's the latest from the Tokyo Games.

Adam Scherr prepare himself to lift the rear of a car during the North America Strongman competition in Tunica, Miss. Scherr went on the win the event and earn his Strongman Pro Card.

Adam Scherr of Sherrills Ford won the title of North America's Amateur Strongman Champion during an event held in November in Tunica, Miss. Scherr is currently preparing for the Arnold Classic in Columbus, Ohio.