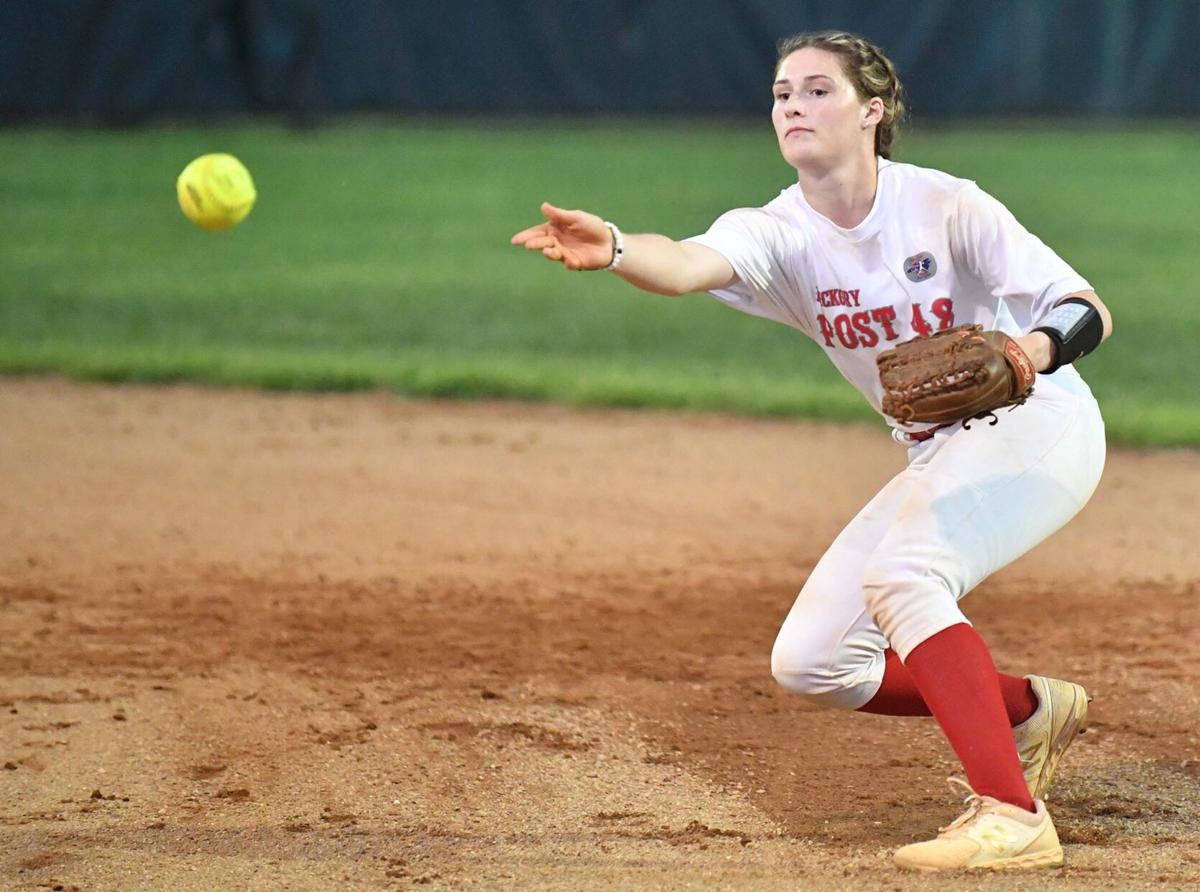 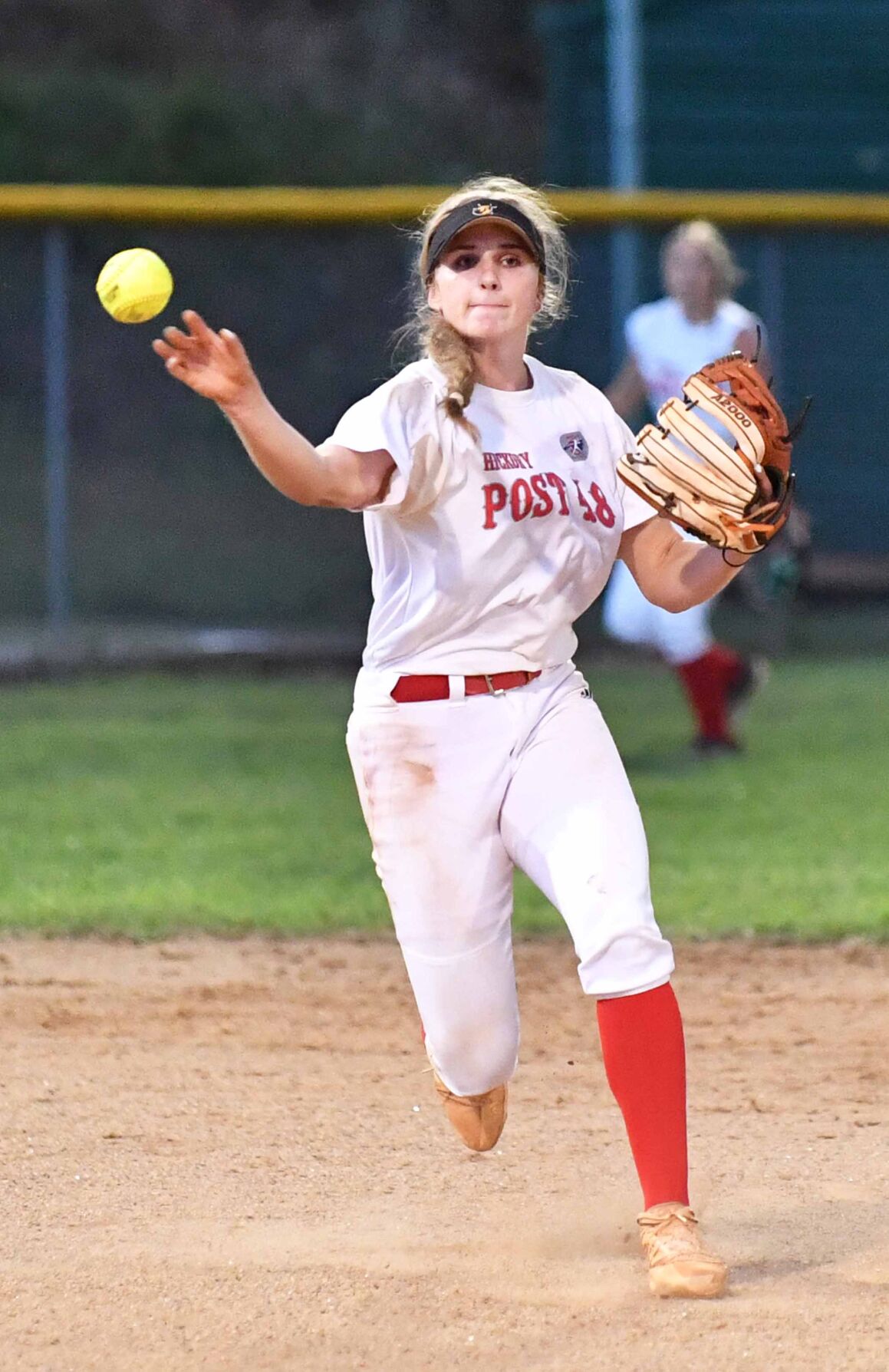 Hickory Post 48's Addie Wray, 1, throws to first to record an out during Tuesday's game.

“I never thought I would be in that spot,” McIntosh said of her seventh-inning heroics that gave Post 48 a sweep in the best-of-three series. “It’s crazy.”

Hickory certainly didn’t start the 2021 campaign in a manner that foretold of an area championship and state tournament bid.

“Just so proud of these girls, can’t say enough about them. Battled all year long,” Hickory coach Todd Smith said. “I think we started out like 6-6, and I think we lost like one game since. They just bring it every game. They never think they’re out of it.”

From that point on, the game became an old-fashioned pitchers' duel with Curry and her Hickory counterpart, Haven Helton, playing a game of chess in the pitcher’s circle with excellent and errorless defensive support.

After a lightning delay in the second inning, Post 31 finally tied the score in the fourth. Brianna Lewis got a one-out free pass and Lily Proffit lined a ball off the left field fence to put runners on second and third. Jayla Fisher got the tying run home on a ground ball to short.

But lightning struck again before Hickory came to bat in the bottom of the fourth, and when play resumed, it was under a light but steady rain until the seventh inning.

Wilkes singled in the sixth and seventh innings off Hickory reliever Mayson Lail, but could not advance either runner.

The seventh inning was the only time the entire game Hickory had more than one runner on base in an inning. Jada Spake began the rally with a leadoff single up the middle. Although Curry picked up a strikeout, Kensley Southers was hit by a pitch to put runners on first and second, which turned the Hickory batting order over with one out.

Wray slapped a ball into the hole at short where Lewis made a dive to knock the ball down. However, she was unable to make a play at any of three bases, which were now full and brought McIntosh into the left-handed batter’s box.

With the count even at a ball and a strike, McIntosh hit Curry’s third offering deep into the left field power alley, where the Post 31 center fielder gave it a futile chase until it carried over the fence and the celebration began.

“My coach told me to take a deep breath and to do what he’s been telling me to do the last how many years. And I did,” McIntosh said. “I wasn’t thinking it would go over. It’s crazy.”

Hickory totaled six hits with two going to Wray and an RBI triple to Pennell along with McIntosh’s slam.

Zoey Cheek had two of Post 31’s four hits, the only one for extra bases being Proffit’s two-bagger.

Lail got the win with two scoreless innings of relief for Hickory. She allowed two hits and struck out a pair. Helton, the starter, went five innings, allowed one run on two hits, fanned five and walked one.

Curry was the lone Wilkes pitcher. She allowed six hits with all five Hickory runs earned. Curry struck out seven, walked three and hit a batter.

Hickory will play Davidson, the Area III champion, in the opening round of the state tournament at 2:30 p.m. Monday afternoon at Crest High.

“I hope we can just carry this momentum and keep our strong pitching. Our pitching has been phenomenal the last three-quarters of the season, and just play solid defense,” Smith said. “The girls, I think, have a chance against anybody. I’ll take them against anybody.”

NEWTON — Fred T. Foard had long established itself as a 2A boys soccer program to be reckoned with in the area. On Wednesday night, the Tigers…

Hickory Post 48's Addie Wray, 1, throws to first to record an out during Tuesday's game.