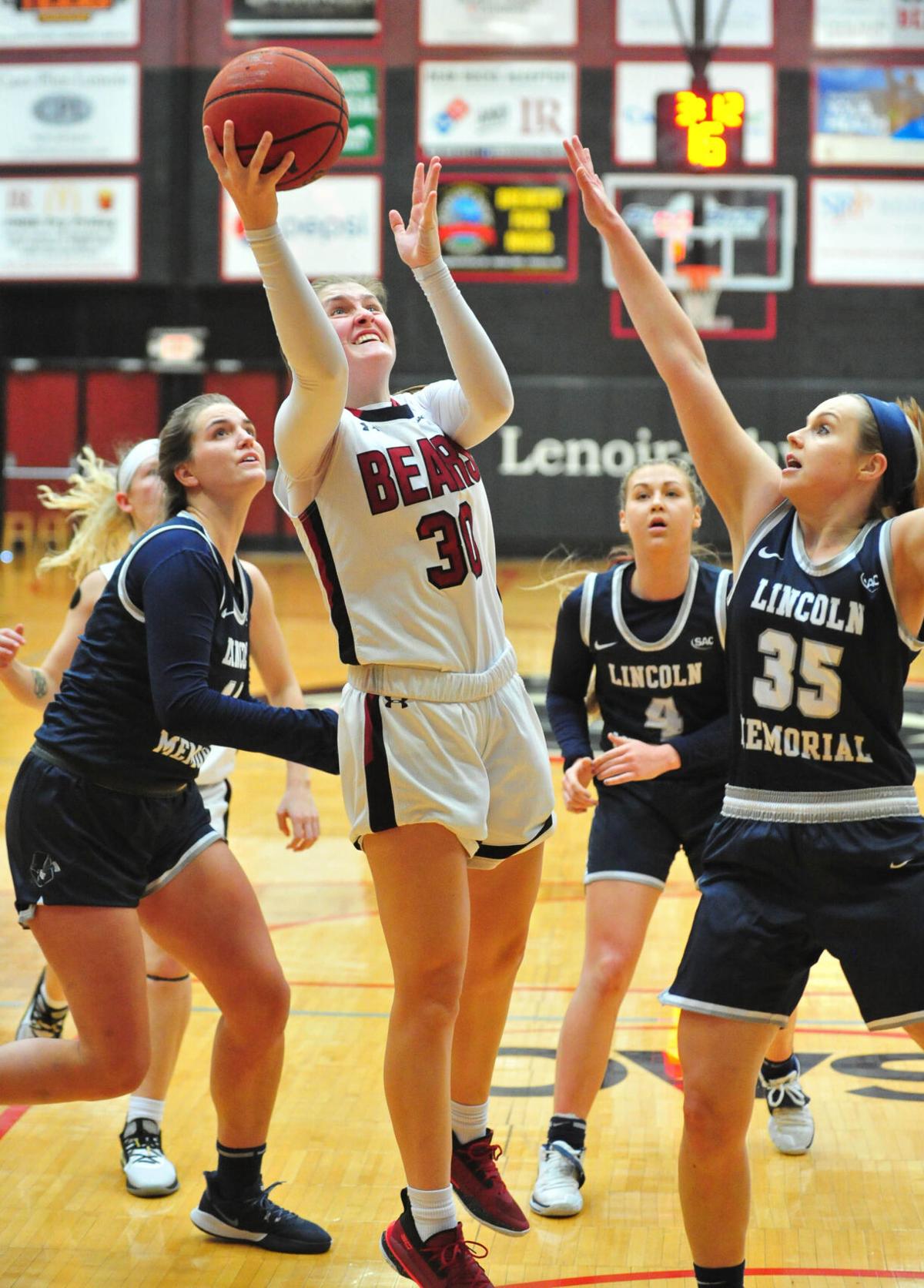 Only 10 players suited up for the Lenoir-Rhyne women’s basketball team on Saturday afternoon, seven of whom received playing time. Of those seven players, three are freshmen and one is a redshirt freshman.

On this day, it didn’t matter that the Bears were going up against a more experienced Lincoln Memorial squad. Nothing was going to stop them from earning their first win of the season, also the first under first-year head coach Grahm Smith, as they emerged victorious by a 63-54 final at Shuford Gym.

“It’s definitely been a long time coming,” said Smith, who was hired by L-R in April after posting an overall record of 135-53 during his first seven seasons as a head coach — five at Dean College in Franklin, Massachusetts, and two at William Peace University in Raleigh. “... The ladies have really bought in 100%, we’ve fought adversity, a lot of challenges have come our way, but this group has been extremely resilient. They’ve bought into our culture, they fight extremely hard and they’ve really focused on just improving each and every day, so I’m really proud of them, they deserve it.

“All the credit goes towards them,” he added. “It’s been a tough year with a lot of adversity, but I’m super proud of them and the way that they continued to fight throughout this entire game.”

For the third time this season, L-R (1-4, 1-4 South Atlantic Conference) carried a two-point lead into the fourth quarter, finally finding a way to close the deal. After falling behind 50-48 midway through the period on a 3-pointer by the Railsplitters’ Jordan Maney, the Bears outscored the visitors 15-4 to finish the contest.

One of the Bears’ clutch performers was freshman Emily Harman, who matched a career high with 20 points while also pulling down seven rebounds and dishing out a career-best four assists. She scored seven points during L-R’s game-ending spurt, drilling a 3 and a pair of jumpers to help the hosts pull away.

Junior Hanna McClung also provided critical contributions for L-R down the stretch, making 5 of 6 free throws in the closing seconds to salt the game away. She played all 40 minutes, scoring 15 points to go with five rebounds and season highs in assists (five) and steals (three).

Bears freshman Blaikley Crooks turned in a career performance as well. The Freedom High alumnus set a new career high with 11 points while also notching five rebounds and two assists for the second time this season.

“It feels good. The team’s excited, the coach is excited, and it was far too overdue,” said Harman of the victory. “So we’re glad to be in the spot we’re in now, we’ve just got to keep pushing and keep working and go for number two.

“We’ve been through a lot of adversity this year, so we’re built to basically go through anything and we just have everybody’s back,” she continued. “... I’m gonna do whatever I can to help the team win and that’s what everybody else on this team does, so it’s a good win.”

McClung knocked down a right-corner trey to start the game, the first of five triples for L-R. She hit her second 3 later in the opening quarter, while a baseline jumper from Crooks put the Bears up 16-9 entering the second period.

Harman got in on the long-range action in the second quarter, her seven points in the frame matching the output she had in the fourth. Lincoln Memorial (3-3, 2-3) shaved three points off L-R’s lead by halftime, but still trailed 27-23 at the intermission.

By the time the fourth quarter arrived, the Bears found themselves in the familiar position of leading by a pair. But the result was different this time around, as L-R built upon its 42-40 advantage, overcoming 17 points in 19 minutes from Maney, 14 points from Lauren Flowers and 12 points and a game-high 10 rebounds from Mikayla Kuehne in 35 minutes off the Railsplitters’ bench.

“We were focused in (on the defensive side),” said Harman. “We work on it all the time, so it was good to see everything come together, everything that we’ve been working so hard for in practice is finally showing.”

Statesville native Mallory Sherrill made the first start of her college career for L-R, and the redshirt freshman responded by scoring six points. Junior Alyssa Wagner added five points and six rebounds in her second game of the season, while senior Olivia Nunn had four points and five boards and freshman Josie Hise — a former standout at both East Burke and Freedom — converted the first two free throws of her career in eight minutes off the bench.

“We definitely had a short bench today,” said Smith. “We really only had two true post players today, so we had to kind of try to balance their minutes out as well, and then just went with what was working. ... That was obviously a lot of minutes for them, but they battled and they stuck it out and they showed that mental toughness that we talk about every day in practice.”

L-R makes the trip to UVa Wise on Wednesday at 4 p.m., while Lincoln Memorial visits Limestone at 5:30 p.m.

L-R comes up short at No. 23 Carson-Newman

Less than 48 hours after suffering a disappointing road loss at the hands of Carson-Newman, the Lenoir-Rhyne men’s basketball team bounced bac…