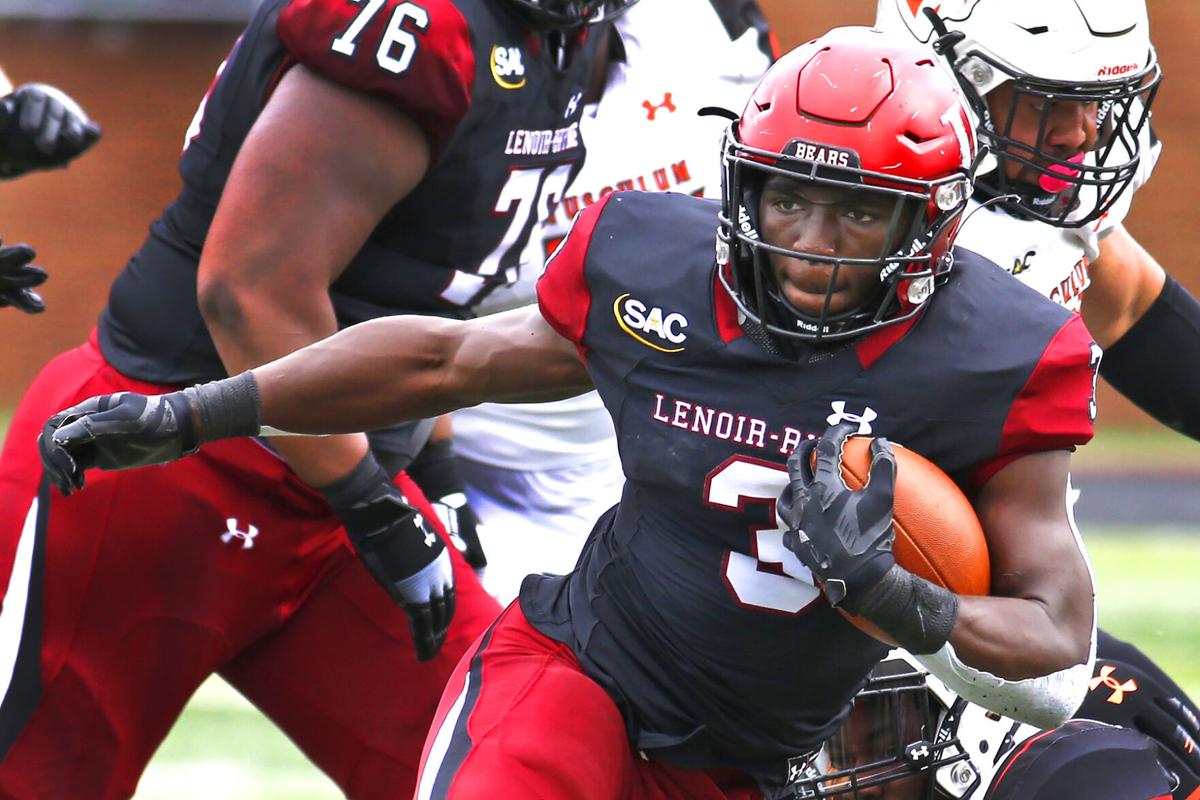 Lenoir-Rhyne’s Dwayne McGee, 3, breaks through the line and looks for room to run during Saturday afternoon’s game against Tusculum at Moretz Stadium in Hickory. McGee finished with 29 carries for 188 yards and three touchdowns as the Bears won a back-and-forth affair by a 38-31 final. 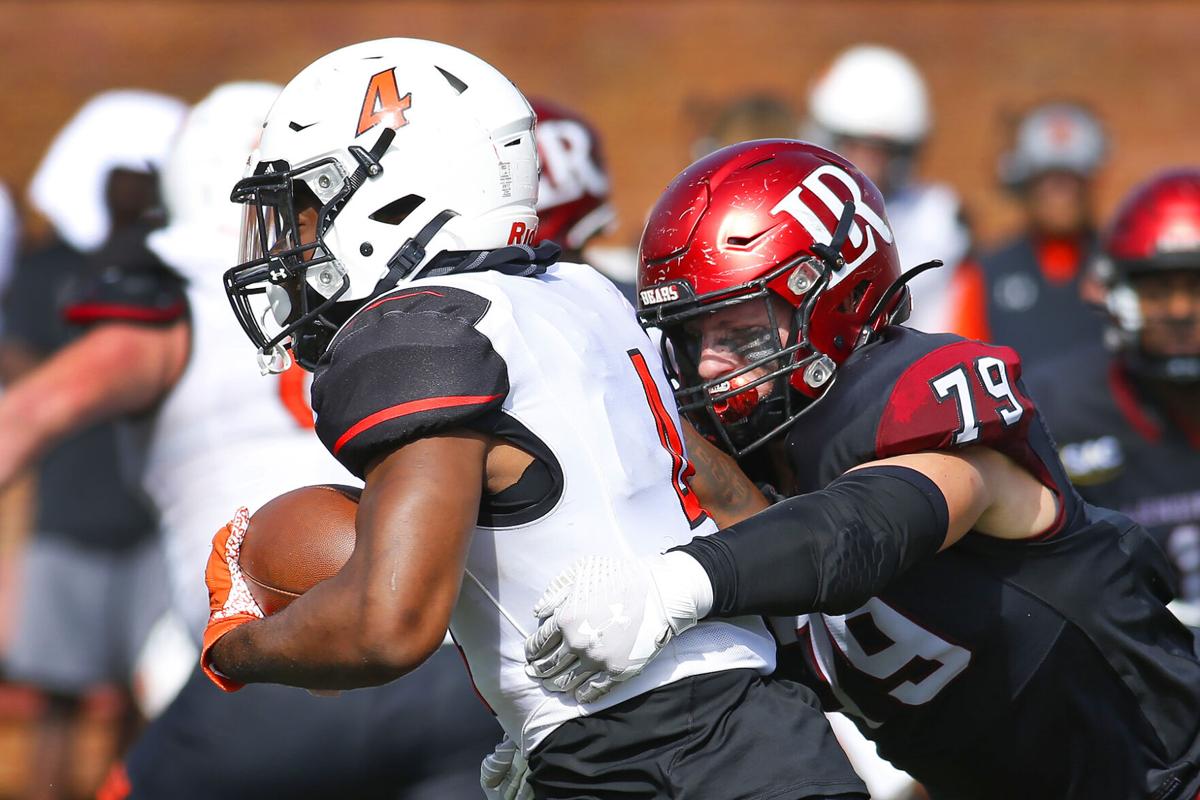 The third time proved to be the charm for the Lenoir-Rhyne football team on Saturday afternoon. Following a pair of seven-point losses over the previous three weeks — both on the road — the Bears defeated visiting Tusculum 38-31 in front of 3,507 fans at Moretz Stadium.

The contest was a back-and-forth affair that included three ties and numerous lead changes. L-R didn’t lead until the second half, and the Bears didn’t manage consecutive scores until late in the fourth quarter.

Despite turning the ball over three times, L-R improved to 3-2 overall and 2-2 in South Atlantic Conference play this season. The Bears’ defense also had three takeaways as they avenged a loss to the Pioneers (2-4, 1-3 SAC) in last season’s conference championship game and moved to 2-0 at home this fall.

“We talked all week about our practice habits and we’ve got a really young football team that’s a little bit beat up right now, but those guys made plays when they needed to,” L-R head coach Mike Jacobs said. “They stayed together and that was a gutsy win by our kids today. I’m just super proud of them.”

“It feels good to get the win here after that Tusculum loss in the spring,” Bears running back Dwayne McGee added. “I felt like we let the fans down, we can’t do that anymore. We’re not playing for just us, we’re playing for Hickory, playing for the city, and it feels good to have a win here.”

L-R’s Jadus Davis recorded a 33-yard run on the second play from scrimmage, but fumbled on the next play. Jordan Taylor forced the fumble for Tusculum, while teammate Quaheim Glasgow recovered the ball at the Pioneers’ 33-yard line.

Tusculum made the Bears pay for their miscue, driving 67 yards in nine plays and scoring on a 5-yard touchdown pass from Ivan Corbin to Will Sweeper just over four minutes in. Nevertheless, L-R was able to respond with an eight-play, 66-yard drive of its own that ended when McGee scored from 28 yards out.

The Pioneers answered with another scoring drive that covered 83 yards in less than a minute and a half. The big play came on a 72-yard pass from Corbin to Jarvis Jones, with Corbin adding a 9-yard TD run two plays later to put Tusculum up 14-7.

L-R knotted things at 14-all at the 5:56 mark of the second quarter when Jordan Payne caught a 35-yard TD pass from Grayson Willingham on fourth-and-10. However, Tusculum had the last laugh in the first half after Raynell Killian intercepted a Willingham pass and returned it 52 yards to the Bears’ 38. Seven plays later, J.A. Pittman kicked a 26-yard field goal to give the Pioneers a 17-14 advantage at the half.

The Bears took their first lead with 13:13 remaining in the third quarter. After forcing Tusculum to punt, Ryan Carter fumbled on the return and the Pioneers’ Billy Weekley recovered at the L-R 31. L-R’s Jimmie Palmer intercepted a Corbin pass on the second play of the ensuing drive, though, returning it 29 yards and close to midfield. On the next play, McGee broke free for a 52-yard TD run that gave the hosts a 21-17 lead.

It didn’t take long for Tusculum to answer, as Cortney Jackson recorded an 82-yard scoring scamper on the first play of the Pioneers’ next drive. But L-R countered with an 11-play, 67-yard drive that was capped by Willingham’s 1-yard sneak to make it 28-24 in favor of the Bears with 7:36 remaining in the third quarter.

Bryce Moore scored from 1 yard out early in the fourth period to help Tusculum pull back ahead, but L-R rallied late. The Bears punted on each of their next two possessions before L-R’s Quentin Hayes recovered a Corbin fumble at the Pioneers’ 8 with 7:14 to play, setting up a 21-yard field goal from Allbaugh less than a minute and a half later.

A sack by the Bears’ Amari Houston on third-and-two forced Tusculum to punt on its next possession, and while L-R also punted the next time it had the ball, Derrick Wright fumbled on the return and the Bears’ Malakei Sumner — a 2020 Hickory High graduate — picked it up at the Pioneers’ 33. Four plays later, McGee found pay dirt from 25 yards out to give L-R a 38-31 lead with 1:11 left.

Tusculum took some deep shots on its next drive, but following a 10-yard pass from Corbin to Justice Parham on the opening play, the Pioneers’ next four pass attempts were incomplete. They turned the ball over on downs at their own 33 with 30 seconds remaining and no timeouts, which allowed L-R to take a knee and run out the clock.

“I’m super proud for our kids,” said Jacobs. “There’s been a lot of outside noise and they came together, they practiced really hard, they kept themselves composed. Composure was what we talked about all week, and they won the football game and I’m super proud of them.”

Willingham was pressured often by Tusculum’s defense, although the Pioneers only managed one sack. The senior quarterback was just 11-of-30 passing for 122 yards, finding seven different receivers led by Payne with two catches for 43 yards and Kelin Parsons with three receptions for 32 yards.

Conversely, Corbin completed 24 of 51 passes for 339 yards, but was sacked on three occasions. Donte Young had 1.5 sacks for L-R, while Houston had one and Hayes finished with a half-sack.

Parham caught nine passes for 107 yards, while seven others hauled in receptions for Tusculum. McGee was the game’s leading rusher with 29 carries for 188 yards and the three scores, and the freshman has now surpassed 100 yards in every game this season and in seven of nine games since he arrived at L-R.

Additionally, Allbaugh made all five of his extra-point attempts for L-R, and the senior has now made an NCAA Division II record 131 consecutive extra points. The previous record was 127 in a row.

“It means a lot to help my team in any way I can,” said Allbaugh, who credited the holders and long snappers he has played alongside during his time at L-R.

“I mean, it’s hard to be the best ever at something, right?” added Jacobs. “... He’s as consistent as any special teams player I’ve been around in my career and I’m just super proud of him. He’s a ‘super senior’ that came back and he’s doing everything we ask and he’s seeing the fruits of his labor, but that’s awesome.”

The Bears visit Carson-Newman next Saturday at 1 p.m., when they will look to improve on their 1-2 road record. On the other side, the Pioneers host UVA Wise at 1:30 p.m.

JEFFERSON CITY, Tenn. — For some reason, the Lenoir-Rhyne football team has had a hard time winning games on the road this season, dropping tw…

The Duke men's basketball team, which is ranked No. 9 in the Associated Press preseason poll, is the favorite to finish first in the ACC regular-season standings.

MORGANTON — The Lenoir-Rhyne men’s golf team posted its best finish of the season in its final fall event of the 2021-22 campaign. The Bears h…

Wednesday night’s performance by the Catawba Valley Community College volleyball team was a bright spot in what has been a challenging season so far.

SYRACUSE, N.Y. — Having tripled last season’s win total halfway through 2021, the Syracuse Orange have helped their fans largely forget the no…

SALISBURY — The Lenoir-Rhyne volleyball team won for the 10th time in its past 11 matches on the road Wednesday, defeating Catawba in four set…

CHARLOTTESVILLE, Va. — Brennan Armstrong threw for two first-half touchdowns and ran for another and Virginia scored on all six possessions be…

BOSTON — Boston College coach Jeff Hafley was too busy to watch the Boston Marathon when the race ran past the Chestnut Hill campus Monday. He…

Lenoir-Rhyne’s Dwayne McGee, 3, breaks through the line and looks for room to run during Saturday afternoon’s game against Tusculum at Moretz Stadium in Hickory. McGee finished with 29 carries for 188 yards and three touchdowns as the Bears won a back-and-forth affair by a 38-31 final.