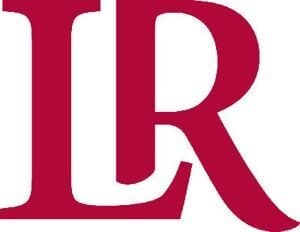 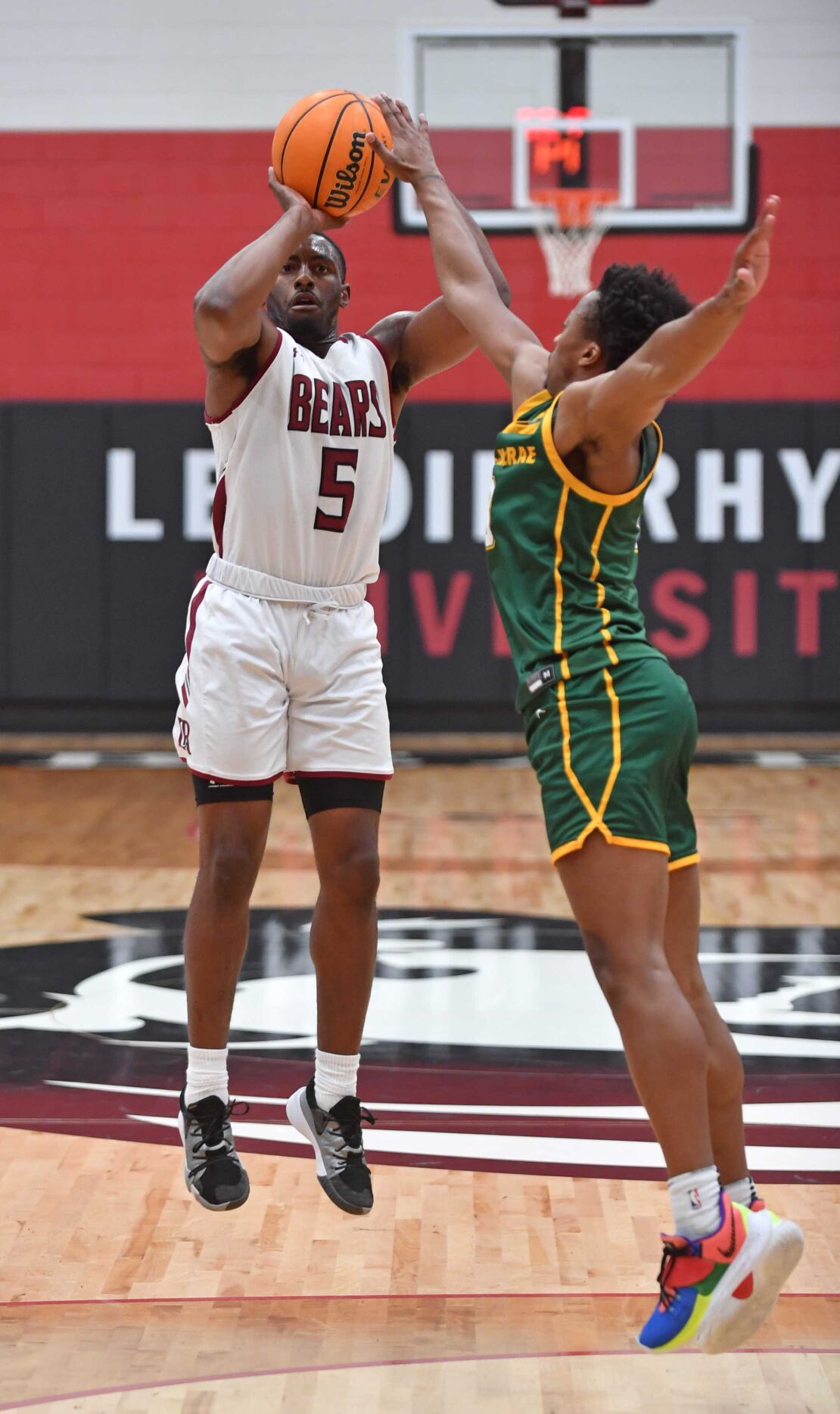 Lenoir-Rhyne's Jalen Johnson, 5, attempts a jump shot over Lees-McRae's Malik McConnell, 3, Saturday in Hickory. The Bobcats knocked off the Bears by an 84-81 final despite trailing for most the contest.

ROCK HILL, S.C. — The Lenoir-Rhyne volleyball team overcame first- and third-set losses to win the South Atlantic Conference tournament championship against Anderson (South Carolina) in five sets on Saturday. The third-seeded Trojans won 25-19 in the first set before falling 25-20 in the second, and after Anderson took set three by a 25-15 score, fourth-seeded L-R won the next two sets by tallies of 25-18 and 17-15.

The Bears (22-7) advanced to the title match courtesy of a four-set victory over top-seeded Tusculum on Friday, with Saturday’s victory giving them only the second SAC tournament championship in program history. L-R last won the conference tournament in 2015.

Colette Romp finished with 21 kills during Saturday’s contest to pace the Bears’ attack, while Taylor Prall had 17, Emma Clark recorded 13 and Ashley Hawkins had 10. Prall also had two of L-R’s four aces to go with two blocks and 20 digs, with Rachel Bewick notching 23 digs, Hawkins chipping in 17 and Mackenzie Husley tallying 13 digs and 54 assists.

Clark added 11 blocks for L-R, which now awaits its NCAA Division II tournament fate. Brackets are set to be revealed on Monday at 7:30 p.m.

As for Anderson, Saturday’s loss dropped its record to 20-7.

Following 110 minutes of scoreless play on Friday, the NCAA Division II playoff first-round match between SAC rivals went to penalty kicks, with the Bears prevailing 3-1 to hand the second-seeded Indians their first loss of the season after they entered with a record of 18-0-2. Seventh-seeded L-R is now 11-5-3 ahead of Sunday’s second-round contest against third-seeded Queens (16-4-1), which topped sixth-seeded North Georgia 2-1 on Friday.

The second-round match — scheduled for a 2 p.m. start — will also be played in Salisbury. The Bears advanced on PKs thanks to successful attempts by Madi Kyle, Stephanie Figueiredo and Kate Casey.

On the other side, L-R goalkeeper Grayson Cameron only allowed one Catawba player to find the back of the net, with SAC offensive player of the year Hannah Dunn doing the honors. Cameron and Indians keeper Jamie Kazenmayer each had five saves.

"Just so proud of the girls," L-R coach Gary Higgins said. "To be able to battle and defend like their lives depended on it for 110 minutes was just an amazing performance. And credit to (assistant) coach Carlos Rubio for getting Grayson prepared for the penalty kicks. We knew she was going to come through for us. Just an unbelievable win."

The 10th-ranked and second-seeded Bulldogs took a bite out of the visiting Bears in the first round of the NCAA Division II playoffs on Saturday in Bowie, Maryland. Bowie State never trailed in the contest after taking a 7-0 lead on a 65-yard touchdown run from Ja’rome Johnson less than 2 1/2 minutes in.

L-R (8-3) briefly pulled within four points on a 40-yard field goal from Chase Allbaugh with 7:49 remaining in the second quarter, but the Bulldogs (11-1) countered with a 70-yard interception return for a TD from Tevin Singleton before tacking on a 34-yard field goal from Alen Omerhodzic to carry a 17-3 advantage into halftime. Johnson then notched a 48-yard TD run in the third quarter to extend the lead.

Following a 39-yard TD pass from L-R’s Grayson Willingham to Jordan Payne with nine seconds left in the third quarter, Bowie State capped the scoring with a 15-yard scoring scamper from Calil Wilkins at the 5:33 mark of the fourth. Johnson and Wilkins finished with 147 and 101 rushing yards, respectively, while the Bulldogs’ defense held L-R’s Dwayne McGee to a season-low 71 yards on 23 carries.

Willingham completed 27 of 45 passes for 343 yards, but was intercepted twice in his final game for the Bears. Payne and Kelin Parsons finished with 127 and 109 receiving yards, respectively, as they combined for 15 catches.

Bowie State will host Newberry (10-2) in next Saturday’s second round after the Wolves upset 2019 national champion and third-seeded West Florida 33-30 in overtime in the opening round.

The Bears saw their season come to an end with a one-goal loss in double overtime at the hands of the 19th-ranked Saints on Friday in Young Harris, Georgia. The contest was an opening-round game in the NCAA Division II playoffs.

Both teams went scoreless in the second half and the first overtime period, but the Saints registered the match-winner with 57 seconds left in double overtime. Sjur Drechsler scored off an assist from de Laaf to send Limestone to the second round.

Johann Hipper notched seven saves for Limestone in goal, while L-R received four saves from Juan Basabe. The Saints will face top-seeded Young Harris (17-0-1) in the second round on Sunday at 3 p.m. after the Mountain Lions received a first-round bye.

The Bears couldn’t hold a late lead against the nonconference Bobcats at home Saturday in Hickory, with Lees-McRae grabbing a 7-0 advantage early but not leading again until there were 18 seconds remaining in the contest. L-R answered the Bobcats’ quick start with a 30-13 run to open a double-digit lead midway through the first half.

After a basket by Jaylin Stewart gave Lees-McRae (3-1) an 82-81 lead in the final minute, the Bobcats made it a three-point margin thanks to a pair of free throws from Justin Nichelson, who scored 15 of his 17 points in the second half to go with eight rebounds for the game. The Bobcats’ Drew Gardner was the game’s leading scorer and rebounder with 18 points and 13 boards.

L-R begins a five-game road swing with a game against SAC foe Coker on Tuesday at 7:30 p.m., while Lees-McRae hosts Conference Carolinas opponent Chowan on Tuesday at 7 p.m.

The Bears lost an exhibition contest against a Division I team on the road Friday in Radford, Virginia. Trailing 12-9 after the first quarter, L-R found itself down 30-15 at the half and 51-39 through three periods.

L-R was led by Brandi Hudson’s game-high 15 points, with Emily Harman also reaching double figures with 14 points and four assists. The Bears visit another Division I foe on Sunday when they take on UNC Greensboro in a 2 p.m. exhibition game before returning to SAC play with a road contest at Coker on Tuesday at 5:30 p.m.

Radford travels to No. 21 West Virginia on Sunday at 2 p.m. before hosting an exhibition game against Lees-McRae on Wednesday at 2:30 p.m.

Tom Brady talks about what he looks forward to in retirement

Cam Heyward apologizes after punching Justin Herbert in the stomach

Cam Heyward apologizes after punching Justin Herbert in the stomach

World Cup 2022: Which teams qualify for the Qatar finals?

World Cup 2022: Which teams qualify for the Qatar finals?

No. 5 Duke rolls after Citadel coach taken to hospital

DURHAM — No. 5 Duke beat The Citadel 107-81 Monday night after Bulldogs coach Duggar Baucom collapsed on the court barely a minute into the ga…

Duke, Miami have much to play for in ACC finale

DURHAM — If there is a notion suggesting that Duke and Miami have nothing tangible to play for today, it would be wildly incorrect.

HARTSVILLE, S.C. — The Lenoir-Rhyne women’s basketball team got a career-high 24 points from Maddie Dillinger on the road Tuesday at the DeLoa…

BOWIE, Md. — Last Saturday, the Lenoir-Rhyne football team faced rival Catawba for the 100th time. This week, the Bears are set to battle an o…

RALEIGH — While North Carolina State coach Dave Doeren knows a Friday night game, even against rival North Carolina, is not ideal for fans of …

CLEMSON, S.C. — Kobe Pace ran for a career-high 191 yards and two touchdowns as Clemson won its 13th straight over No. 13 Wake Forest, delayin…

Lenoir-Rhyne's Jalen Johnson, 5, attempts a jump shot over Lees-McRae's Malik McConnell, 3, Saturday in Hickory. The Bobcats knocked off the Bears by an 84-81 final despite trailing for most the contest.