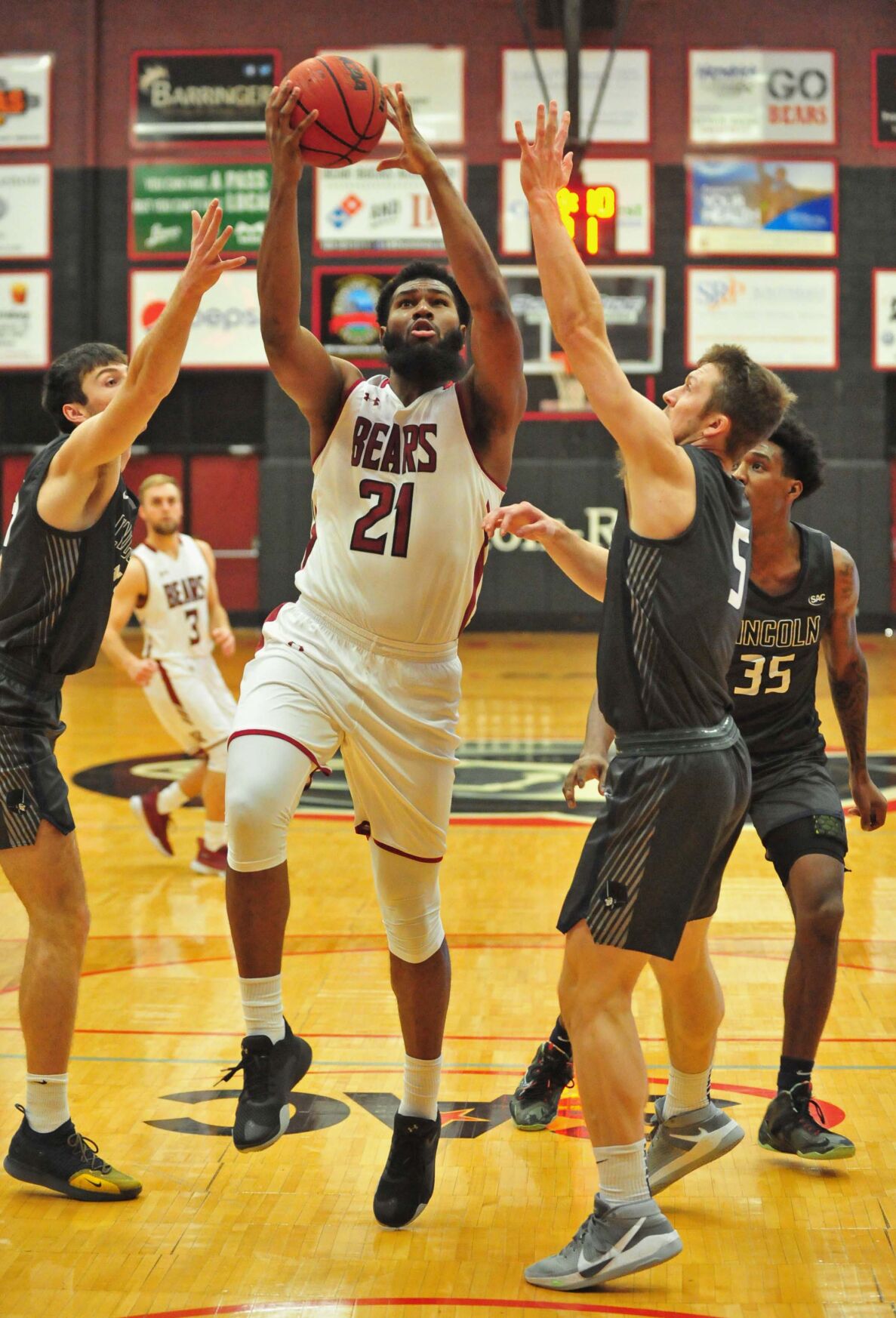 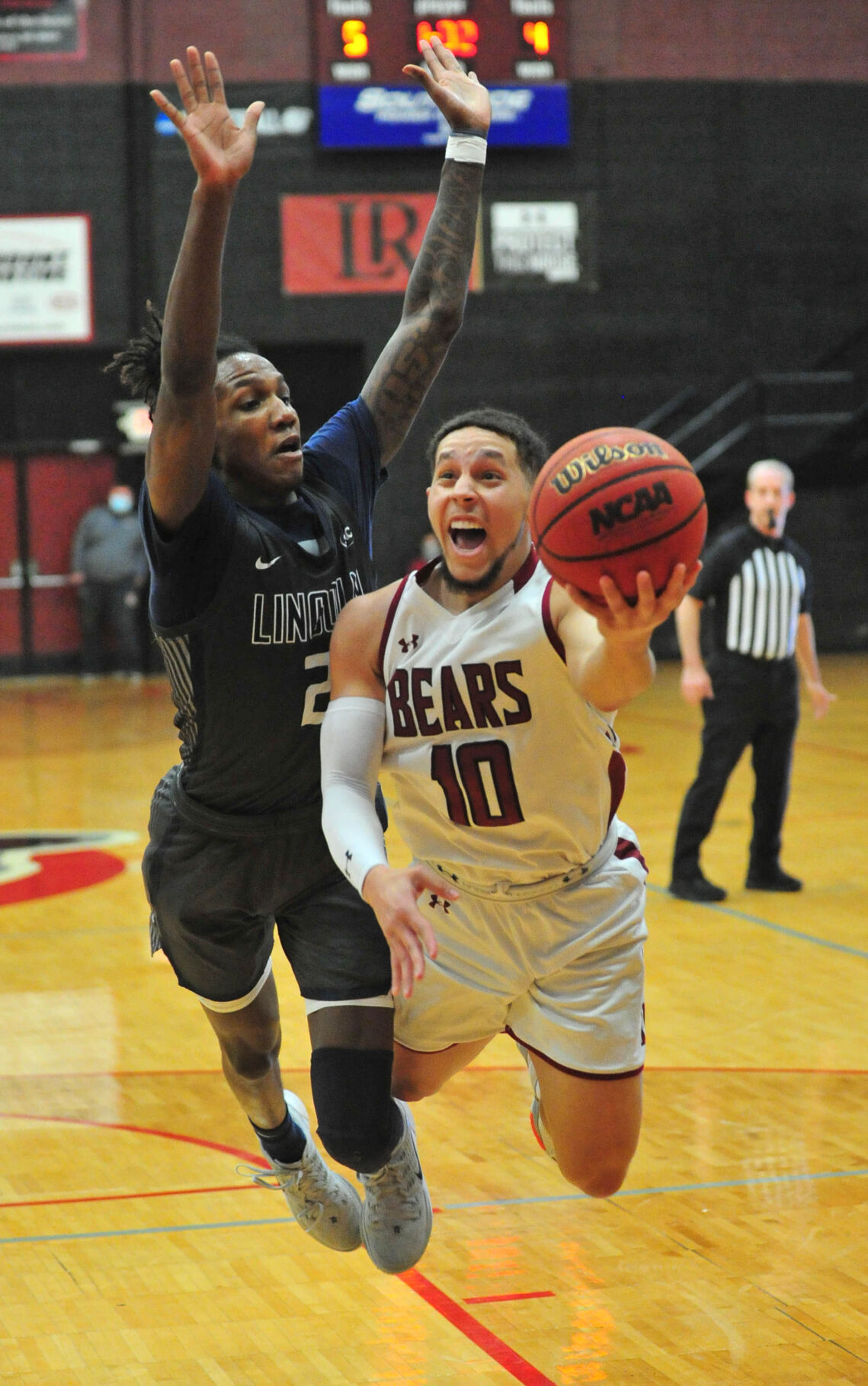 Lenoir-Rhyne's Darius Simmons (10) gets airborne along with Lincoln Memorial's Devin Whitfield (2) during his shot attempt in Saturday's game in Hickory.

It has often been said that in the NBA, every team makes a run.

The Lenoir-Rhyne and Lincoln Memorial men’s basketball teams don’t play in the NBA, but on Saturday evening, the South Atlantic Conference foes each made runs. In the end, the host Bears had the decisive one, holding off the second-ranked Railsplitters by an 89-83 score at Shuford Gym for the biggest upset in program history.

“They did it as a unit,” L-R coach Everick Sullivan said of his team, which ended a 39-game winning streak by the Railsplitters that began on Nov. 2, 2019. “They won’t give the credit to one individual, they know it was a team effort and that’s what I think is the best characteristic of this team. They play together, they’re very unselfish, and I just enjoy coaching them.”

It clearly wasn’t an easy task, but the Bears (3-1, 3-1 SAC) made things look fairly simple in the first half, outshooting Lincoln Memorial 47.2% (17 of 36) to 29.6% (8 of 27) while outscoring them 18-9 from 3-point range and leading for over 15 minutes. L-R built a 45-29 halftime advantage behind strong play from every player who hit the court — including redshirt senior Darius Simmons, a Raleigh native who scored 10 points in the opening half and finished with a game-high 23.

“I feel like as a team we came out with a focus. We know they’re a really good team, so we thought we had to hit them first and we had to make sure that we were talking about everything ... and we just tried our best to guard all their actions,” said Simmons, who was aided by 20 combined points from seniors R.J. Gunn and Mason Hawks over the first 20 minutes, along with seven from sophomore Cooper Fowler. Gunn totaled 20 points for the game, while Hawks added 19 and Fowler was one of three Bears to finish with seven.

“We know it’s tough and not letting our foot off the gas, you can’t let your foot off the gas against the number two team in the nation, so that was our game plan,” said Simmons. “It was a full team effort. ... Everybody chipped in, everybody did their thing.

“It’s only the fourth game of the year, we’ve got a lot of potential,” he added. “I feel like it’s gonna be a great year for us still, even with COVID.”

Defensively, the Bears held Lincoln Memorial (7-1, 5-1) leading scorer Devin Whitfield to four first-half points, well below the 21.7 points per game he had averaged coming in. He ended up scoring a team-high 21 points, but was harassed throughout the opening half by the likes of freshman Armon Muldrew — who scored seven points in his first collegiate start — and senior Davion Bradford.

“Lincoln Memorial, give those guys credit, they are a deadly team, an explosive team,” said Sullivan. “... I’ve got great assistants, Coach (Zach) Corliss and Coach (Blake) Simmons did a great job in preparation for the game, so we were prepared for a lot of their action. We play very similar with our five-out concepts and shooters all over the floor, so it wasn’t a strange scout in terms of guarding something new, but they can take it to a different level.”

It didn’t take long for Lincoln Memorial to cut the deficit to single digits in the second half, as Whitfield and Co. looked like men on a mission early on. The 6-foot-5, 170-pounder drained a straightaway 3-pointer to begin the period, and followed a pair of Simmons foul shots with a layup to quickly surpass his first-half point total.

Whitfield knocked down back-to-back triples later in the half as well, trimming the L-R lead to just two at 51-49 with over 13 minutes still to play. The Bears continued to lead for the time being, but it was another 3 by the visitors — this one by Jordan Guest — that put L-R behind for the first time since early in the first half, 71-70, at the 5:03 mark.

Undaunted, the Bears answered with a couple treys of their own, the first from Hawks and the second from freshman Tim Steele. Following two free throws from Lincoln Memorial’s Xavier Bledson, Gunn got in on the 3-point party from far behind the line to extend the lead to six at 79-73.

L-R never trailed again, though the Railsplitters did make it 79-77 on a layup from Guest with 2:25 remaining. The Bears reeled off six straight points from there, and never looked back on their way to a six-point triumph.

“They made a run, our guys were able to just hold the fort down,” said Sullivan. “We fought through some fatigue, took care of the ball more than anything, and made free throws which is tough to do when you’re a little bit fatigued — step up to the line and win the game at the free-throw line — so guys just executed the game plan.”

“Coach tells us all the time, ‘You’ve got to get to that free-throw line and we’ve got to make those free throws,’” said Simmons. “So every day after practice we shoot 25, 50 free throws and make them, so it’s been an emphasis.

L-R has a quick turnaround as it visits Anderson on Monday at 5:30 p.m. before traveling to UVa Wise on Wednesday at 6:30 p.m. Meanwhile, Lincoln Memorial looks to regroup at Limestone on Wednesday at 8 p.m.

L-R comes up short at No. 23 Carson-Newman

Less than 48 hours after suffering a disappointing road loss at the hands of Carson-Newman, the Lenoir-Rhyne men’s basketball team bounced bac…

Lenoir-Rhyne's Darius Simmons (10) gets airborne along with Lincoln Memorial's Devin Whitfield (2) during his shot attempt in Saturday's game in Hickory.