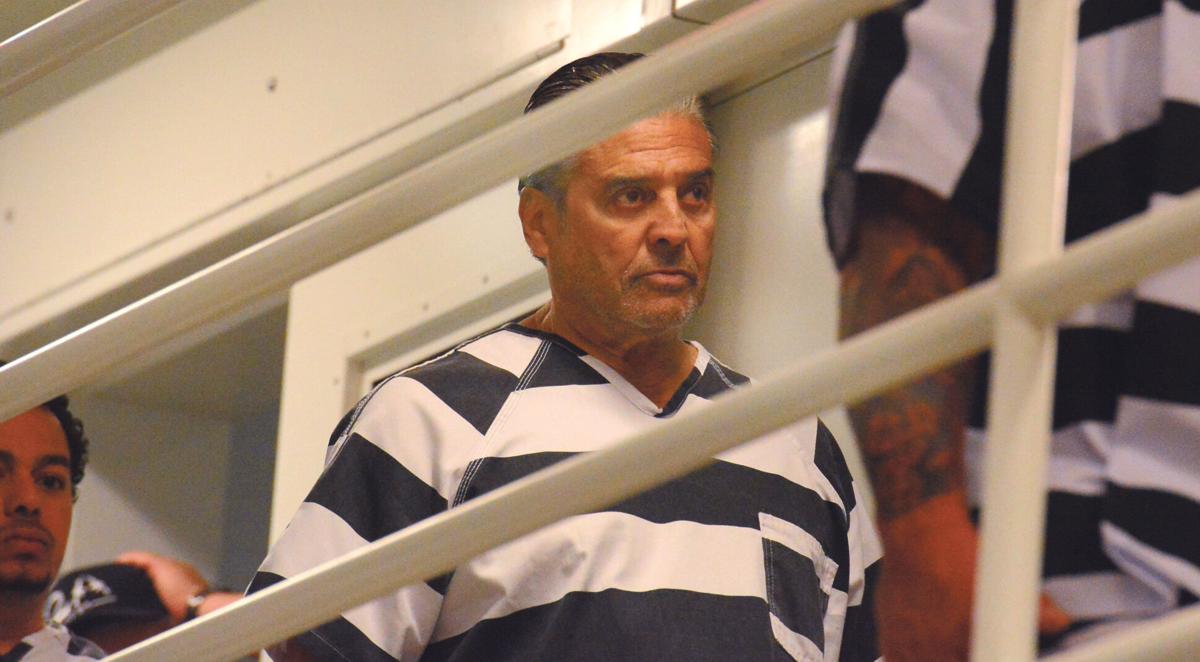 Actor Erik Estrada, center, rehearses a scene during the filming of a movie called “The Mutt,” which is being shot at the new Catawba County Detention Center in Newton. 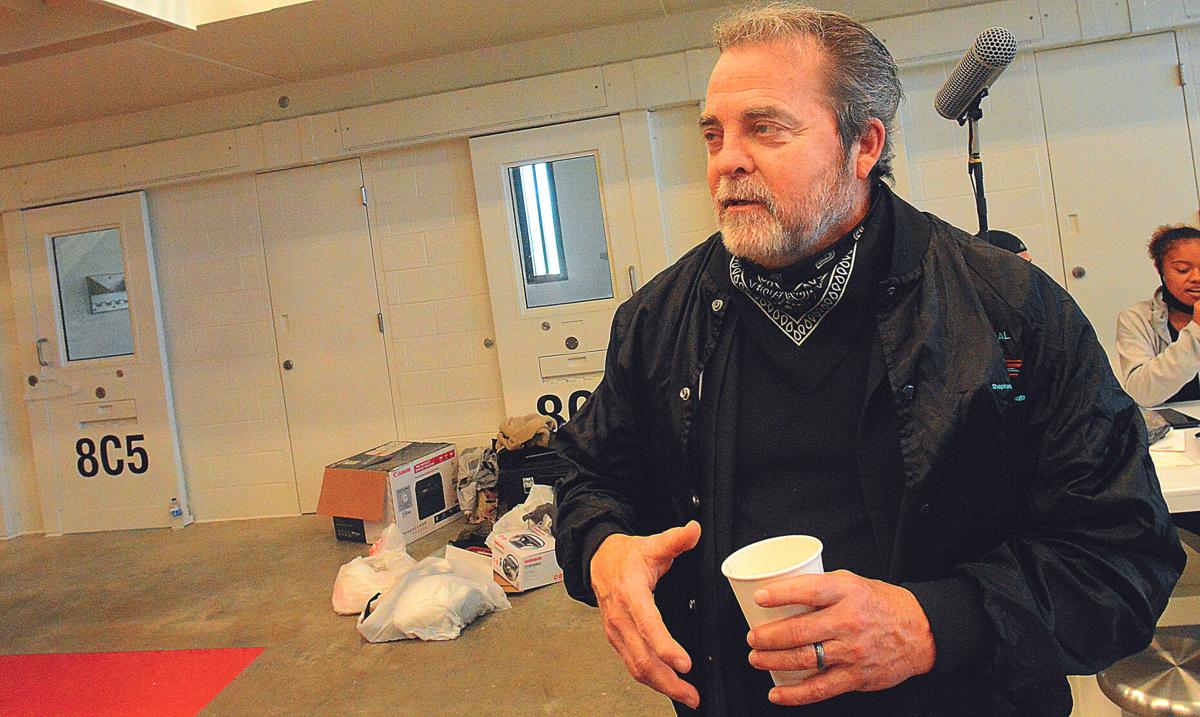 Screenwriter Wayne Deloriea discusses the plot behind his movie “The Mutt” while on the set at the Catawba County Detention Center in Newton. 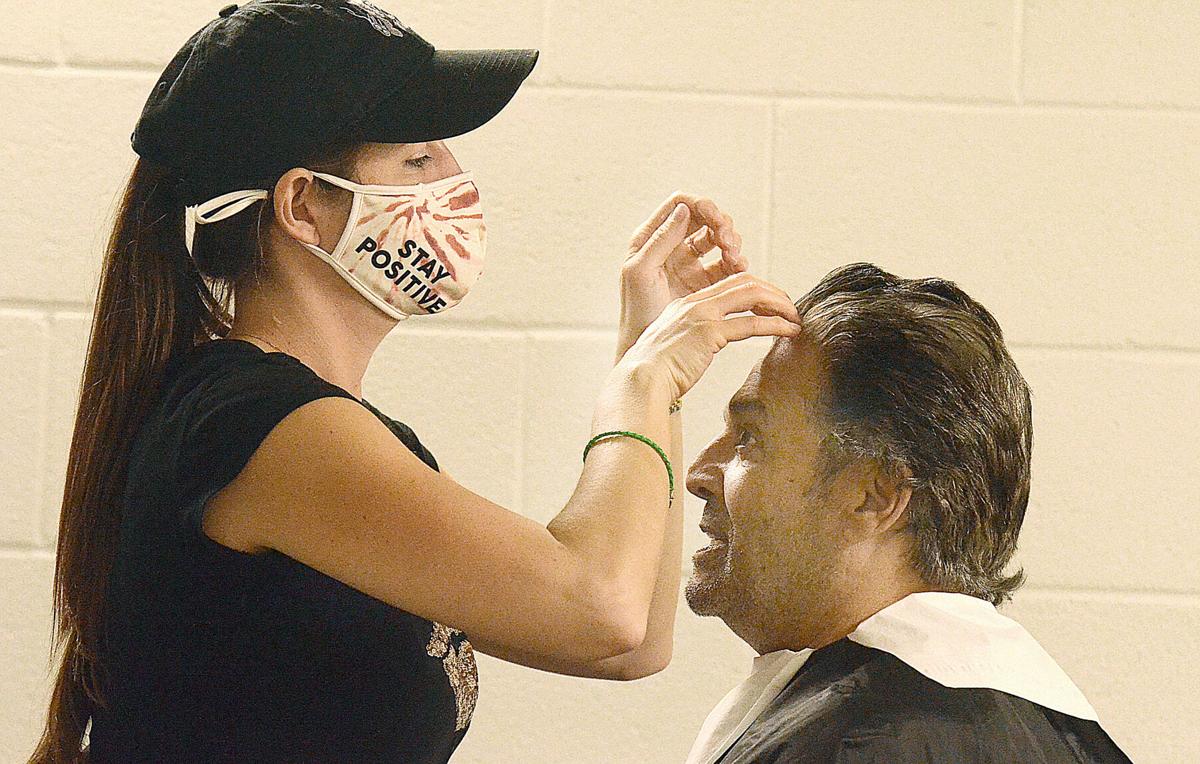 Actor Erik Estrada, right, goes through makeup preparation from Michaela David prior to filming “The Mutt.” 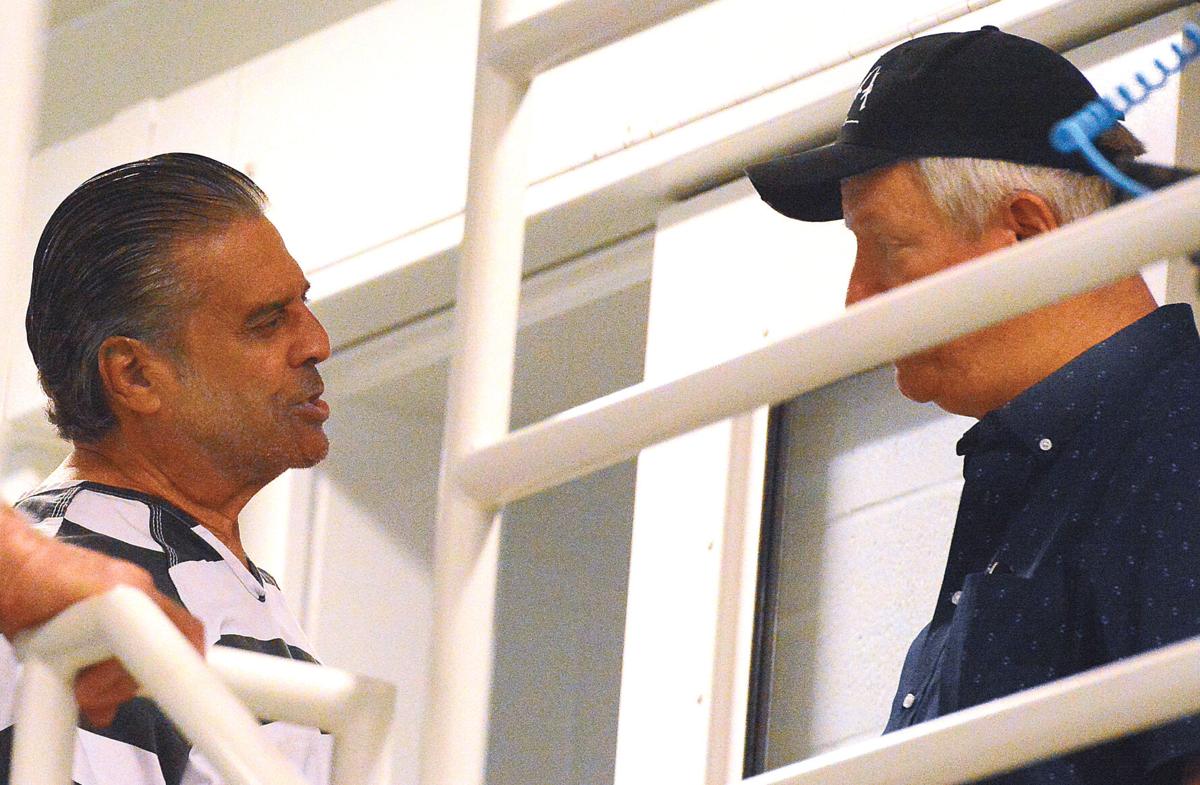 Actor Erik Estrada, left, confers with director Bill Rahn before filming a scene of a movie called “The Mutt.”

The day I was invited to the Newton movie set of “The Mutt” was also the day filmmakers were working with actor Erik Estrada.

Estrada has multiple film and TV credits, but is best known for his role as Officer Francis Llewelyn “Ponch” Poncherello in the police drama TV series “CHiPs.”

In “The Mutt” Estrada is portraying a mob boss.

“People are really nice here, especially when I flew in, waiting for my luggage,” Estrada said. “I started chit-chatting with everybody. Everybody is just really hospitable.”

On set, Estrada appeared relaxed. He kept eyes closed as the makeup artist smoothed back his hair. He opened his eyes for a moment to see photographer Robert Reed snapping photos. He winked a few times for the camera and then returned to his relaxed position.

Estrada said when preparing for a role, he thinks about the way a character would talk, behave and look. “First you want to get the guy’s look,” he said. Estrada had his hair greased back for “The Mutt”.

“Then you learn the lines,” he said. Once he gets direction from the director and writers, Estrada said he has a better idea of how to deliver his lines.

I wasn’t sure what to expect when I arrived on the set of a movie that was being filmed in Catawba County.

I made sure I stayed out of the crew’s way and that I did not disrupt the schedule.

The first thing that really stuck out to me was how friendly everyone was. Each person I talked to was passionate about what they do, whether they were an actor, director or costume designer.

No one seemed stressed or rushed. Rather, they were focused and having a good time.

It was really cool to see everyone working together and the director, Bill Rahn, take control of the room to get the shots he needed.

“The Mutt” is a mob film starring Jermi Little as Joey “The Mutt” and directed by Rahn.

Rahn previously lived in Hickory for 15 years. He said the movie is being filmed in the Catawba County area because the writer of the movie and the lead actor are both from Hickory.

Several of Rahn’s movies are available on Amazon such as “Uncommon,” which also stars Estrada, and “One Church.”

Rahn reached out to the Catawba County Sheriff’s Office. He said he was then connected to Major Billy Boston who runs the detention facility. The timing was fortunate. The sheriff’s office had a completed building that was not yet housing inmates.

Major Boston helped arrange for the movie to be filmed in the new Catawba County Detention Facility.

Boston said them filming the movie at the detention center gives law officers opportunities to test the systems in the building. He said he’s been with the film crew throughout the filming process and has learned a great deal about the industry.

“A small scene can take hours to film. A minute or 30 seconds on camera can take an hour to get the shots,” he said. “It’s fun to see the behind the scenes. I’ll appreciate it more the next time I see a movie.”

Boston said the main reason he and the Catawba County Sheriff’s Office wanted to be part of the movie was to show support for the local companies involved. “It gets Hickory on the map,” he said.

The movie is being filmed around Catawba County and Alexander County through the next few weeks, Rahn said. “We are throwing somebody off a bridge,” he said.

The film crew set up in two cellblocks of the new jail building.

The movie was written by local filmmaker and screenwriter Wayne Deloriea. He owns The Broom Closet: A Movie Production Company in Hickory.

Deloriea said when he’s writing a story he envisions everything about a character and he will then start to imagine the scenes to make the story come to life and the actors that will one day play the characters.

He said two years ago, the movie’s lead actor, Little, approached him wanting to get into show business. Deloriea said he and Little are both veterans and knew one another from similar social circles.

Deloriea assisted him in achieving that goal and introduced him to local talent agent Beverly Brock. Little also presented him with the story concept for “The Mutt.” Deloriea was instantly intrigued.

Deloriea said he wrote 148 drafts of the film. “Anyone who wants to be a writer needs to realize that there are rewrites, and you never really get done until the director says ‘That’s a wrap,’” he said. “They can come to me today, and they will, and they’ll say ‘This is not working,’ and I have to rewrite this particular scene that they are doing to make it work.”

Little is now cast as the lead in his own story, brought to reality by Deloriea.

The movie is being released under the labels Tri-Rahn Pictures and The Broom Closet.

Rahn said the plan is for the film to see a theatrical release in the summer, with a possible premiere event at the Carolina Theatre, and a digital release.

“We are all local guys and we want to support the local people,” Rahn said.

Seeing a movie being filmed in-person was an incredible experience and I could have been there all day just watching.

Kristen Hart is a reporter with the Hickory Daily Record and studied communications at Lee University in Cleveland, TN.

Actor Erik Estrada, center, rehearses a scene during the filming of a movie called “The Mutt,” which is being shot at the new Catawba County Detention Center in Newton.

Screenwriter Wayne Deloriea discusses the plot behind his movie “The Mutt” while on the set at the Catawba County Detention Center in Newton.

Actor Erik Estrada, right, goes through makeup preparation from Michaela David prior to filming “The Mutt.”

Actor Erik Estrada, left, confers with director Bill Rahn before filming a scene of a movie called “The Mutt.” 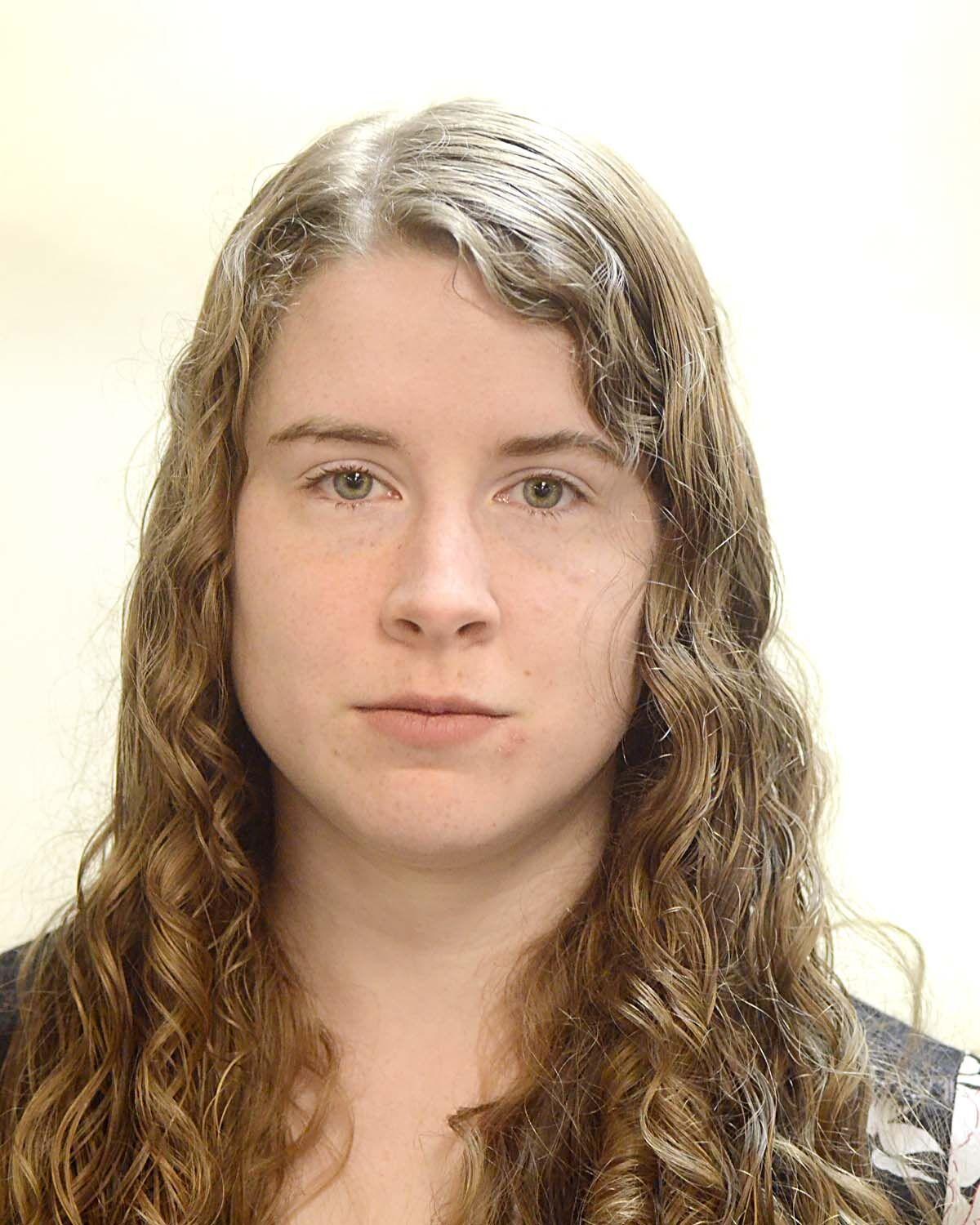