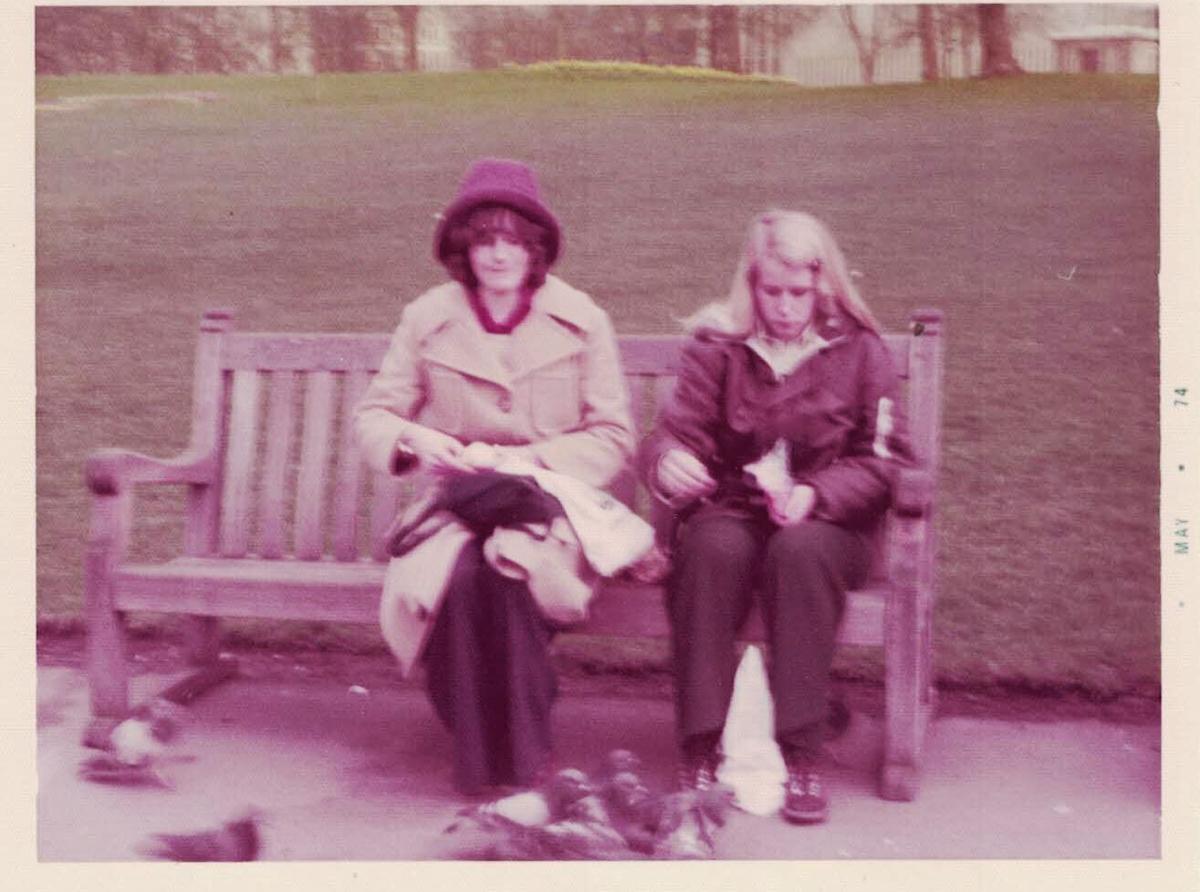 March 12, 1974: Sue (at right) and I sharing our picnic lunch with London pigeons. Minutes later we were invited inside Buckingham Palace.

Season 4 of "The Crown" is a great diversion for chilly November evenings. Netflix released the most recent episodes last Sunday with installments focusing on the 1980s and 1990s, with history most viewers know: Prince Charles, Princess Diana and Camilla Parker-Bowles.

I can’t watch any portrayal of the Royal Family at Buckingham Palace without harkening back to my own brush with royal stardust. The year was 1974; Season 3, if you will. I was a foreign student in the seaside town of Brighton, an hour’s train ride from London.

That year Queen Elizabeth was scheduled to open Parliament on March 12. This would involve much pomp and circumstance, and with any luck, we would see the queen in person, something to tell our friends and family. So it was decided — four of us would play hooky that Tuesday. We would pack a lunch to eat in one of the London parks.

Did I mention that 1974 involved the OPEC oil embargo?

The energy crisis that ensued did a major number on the West, including Great Britain. I remember spending my first week in an unheated hotel (I could actually see my breath while taking a bath). At night I slept in my coat, hat and gloves and still shivered.

We American students arrived in London Jan. 1, and until classes began several days later, we spent a lot of time riding public transportation and touring museums just to stay warm. People could be fined for leaving a light on in an empty room, a solemn reminder of what life had been during the Blitz 35 years earlier. Back then, citizens could be fined for allowing even a sliver of light to show German bombers where to drop their payloads.

Needless to say, life was austere in the UK in 1974. As for our foray to see the queen, we were oblivious to the fact that the usual fanfare would be curtailed. Her trip through town from Buckingham Palace to Parliament was by automobile, not coach. It was the most dressed-down opening of Parliament since the war.

By the time we arrived at the palace gates, the dreary weather matched the mood of the place. We were late for a party that never happened.

After eating our box lunches on park benches the four of us lingered around the palace perimeter, gazing at the immense sand-colored building while a few members of the queen’s household staff strolled along the tall iron fence, chatting with visitors.

By this point, two of my friends had wandered on past the palace gate. Sue, another student from Illinois State University, and I remained at the fence, when one of the men, a stout older gentleman in a long gray coat, made his way over to us and struck up a conversation.

When I asked what it would be like to see inside the palace, he paused. “Would you like to do that, Luv?”

I assumed he was joking until he unlocked the gate and motioned for Sue and me to step inside. Stunned, we followed him across the parade grounds to an entrance where we had seen official visitors coming and going from chauffeured vehicles.

I don’t remember what Sue said to me or exactly what the guard said to either of us, except to be quick about it. Obviously he was bending the rules.

We were ushered inside to an ornate table in a vestibule. I peered down a long hallway with gilt mirrors and red walls, and, of course, the proverbial red carpet for guests visiting the queen’s residence.

“Sign here,” he said, pointing to lines below other visitors’ names.

I don’t remember if we used a plumed pen or a simple gold one. All I know for sure is that Sue Barkley from Yorkville, IL and Tammy McElroy from Shelbyville actually signed the guest registry at Buckingham Palace.

In the years since, I’ve pondered why the two of us were singled out among the random people milling around the palace fence that day. I know that we were not invited until we shed our companions. That freed the official to invite two of us — a permissible number, apparently.

But why did he choose us?

Maybe it’s because we were friendly and nonthreatening. Maybe we reminded him of someone he knew. Or maybe he assumed that we were daughters of American GIs who had done the British people a huge favor during World War II.

All I know for certain is that sometimes bad luck can turn on a dime, or even a six-pence, when you least expect it.

Tammy Wilson is a writer who lives near Newton. Contact her at tamra@tamrawilson.com.

Unfortunately, I missed my opportunity to be a world famous podcast expert on regional snake handling.

Richard Kyte: It's time to start talking to one another

Why are Americans so polarized right now? I’m not sure what the answer is, and I’m not sure it matters that much. What defines us is not so much our reasons as our attitudes.

Column: Time for Cooper to deal

The Ethical Life podcast: Why we should care about ethics

Topics discussed include confirmation bias, the role social media plays in how we consume information and the important questions we need to ask each other to hopefully get at the truth.

I’ve followed election cycles to one degree or another for more than 50 years. I learned much of what I know at the family dinner table, growi…

March 12, 1974: Sue (at right) and I sharing our picnic lunch with London pigeons. Minutes later we were invited inside Buckingham Palace.