Nearly a decade ago, former Canadian politician Michael Ignatieff argued in the New York Times that democracy can only thrive when its practitioners respect the difference between adversaries and enemies. “An adversary is someone you want to defeat,” he wrote. “An enemy is someone you have to destroy.”

Ignatieff was drawing on personal experience. He spent three years as leader of the Liberal Party in a Canadian Parliament controlled by the Conservatives. Two other politicians with relevant experience, U.S. Sen. Thom Tillis and former state Sen. Cal Cunningham, embraced Ignatieff’s distinction during a recent joint appearance in Chapel Hill.

Two years ago, they squared off in one of the most expensive Senate races in American history. Tillis, the incumbent Republican and former speaker of the North Carolina House, ended up defeating Cunningham, an attorney who in addition to serving a term in the state senate is a lieutenant colonel in the Army Reserve. The margin of victory was, however, rather small: 48.69% to 46.94%.

Most of the TV spots in the 2020 Senate race came from independent-expenditure (IE) groups, not the campaigns themselves. As they noted during their conversation, which was hosted by the UNC Center for Public Discourse, Cunningham and Tillis couldn’t by law exercise any control over what those IE groups said or did over the course of the race. What the candidates could control were their own words and actions, and how they interacted with each other.

At their broadcast debates, for example, the two strove to stick to substantive issues when on camera and exchanged playful banter during commercial breaks. After the election, their cordiality turned into something more. The two met for breakfast at a popular Raleigh restaurant. Then Tillis called Cunningham for advice on military matters. Through conversation, a friendship developed. Later, they began talking about it in public.

Notice that I didn’t call it an unlikely friendship. Contrary to what our toxic media climate might lead you to believe, many people in public life get along pretty well with their ideological opponents. When the North Carolina General Assembly convenes for its 2023 session, you won’t find groups of lawmakers prancing through the halls like hostile gangs from West Side Story, singing lines like “When you’re a Dem, you’re a Dem to the tee/We are out to lay waste to the whole GOP!”

To say real-life legislating and lobbying bear little resemblance to the wrestling-match caricatures you find on cable news or social media is not to say political disagreements are all for show. They’re very real. Tillis and Cunningham don’t see eye-to-eye on the federal budget, gun control, climate change, and a host of other issues. They still debate them, publicly and privately. What they don’t do — what all of us should try not to do — is accuse the other of being stupid, dishonest, or evil.

“You see, a lot of behavior driven by leaders is a reaction to something that has surfaced on social media,” Tillis said at the Chapel Hill event. “I just ask people that before you press send, or tweet or snap, ask yourself: would you sit in front of a room like this and say the same sort of thing, with the same sort of tone?”

To encourage our leaders to model better behavior is precisely why former state Sen. Leslie Winner and I founded Duke University’s North Carolina Leadership Forum in 2015. Our program brings together some three dozen leaders at a time — from politics, business and nonprofit groups — to practice constructive engagement across political difference.

One tool for building relationships is to share personal stories about how we come to believe what we believe. Another is the lubricant of laughter. Asked at the UNC event about the much-ridiculed tweet of him in a pristine “barbecue” apron standing next to a gas grill, Cunningham raised his hands in mock surrender. “Bless my out-of-state staff,” he said apologetically.

Recently, I saw a dozen eggs priced at $8.30. Granted, they were organic eggs at Publix, but still.

Dean Baker: Biden has earned a solid 'A' halfway through term

At the midpoint of President Joe Biden’s first term, he deserves a solid “A” for turning the economy around, getting the pandemic and inflation under control, and encouraging a rapid transition to clean energy. No president since Lyndon Johnson has as much to show for his first two years in office. Unlike Johnson, Biden managed to push key legislation with a tiny majority in the House and the thinnest possible margin in the Senate.

Froma Harrop: The view from the suburbs looks bad for Santos and the GOP

Moderates are in the suburbs -- Democrats, Republicans and independents -- who want Washington spending kept in check. They tend to be liberal on social issues but pained over the extremes of the woke. They have respect for various sexual identities but little interest in learning new pronouns. And they overwhelmingly want some access to abortion.

The Biden administration has touted the return of diplomacy while failing to meaningfully deliver on this tenet in many ways.

Column: Will more NC books be made into films?

Why aren’t more North Carolina books made into movies?

Are today's parents worried about the wrong things? | The Ethical Life podcast

🎧 The hosts discuss a recent advice column, in which a grandmother said she was losing sleep about her 9-year-old granddaughter walking home alone from school.

For decades, I’ve predicted a robot would eventually take my job.

Column: A great Black-owned barbecue is in trouble

Two years ago a Durham restaurant, Backyard Barbecue, gained national attention for being featured in “Black Smoke: African Americans and the …

Column: Love, trust and find joy as you mentor others

Rinker Buck dedicates his latest adventure book about “Life on the Mississippi” to his former teachers who instructed him through the years. H…

Column: Roads are a solution, not a problem

While Charlotte is known as the Queen City, the behavior of its leaders sometimes invites comparison to a different monarch: Hans Christian An…

Thom Tillis addresses a question on state funding of the Smart Start program during a town hall meeting at Catawba Valley Community College in 2011. 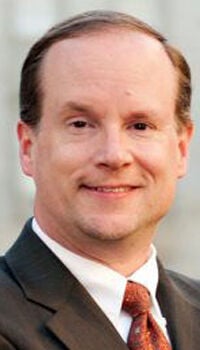