Now settled in Greensboro, Afghan family thankful they came to America. To home.
0 Comments
Share this
{{featured_button_text}}
1 of 3 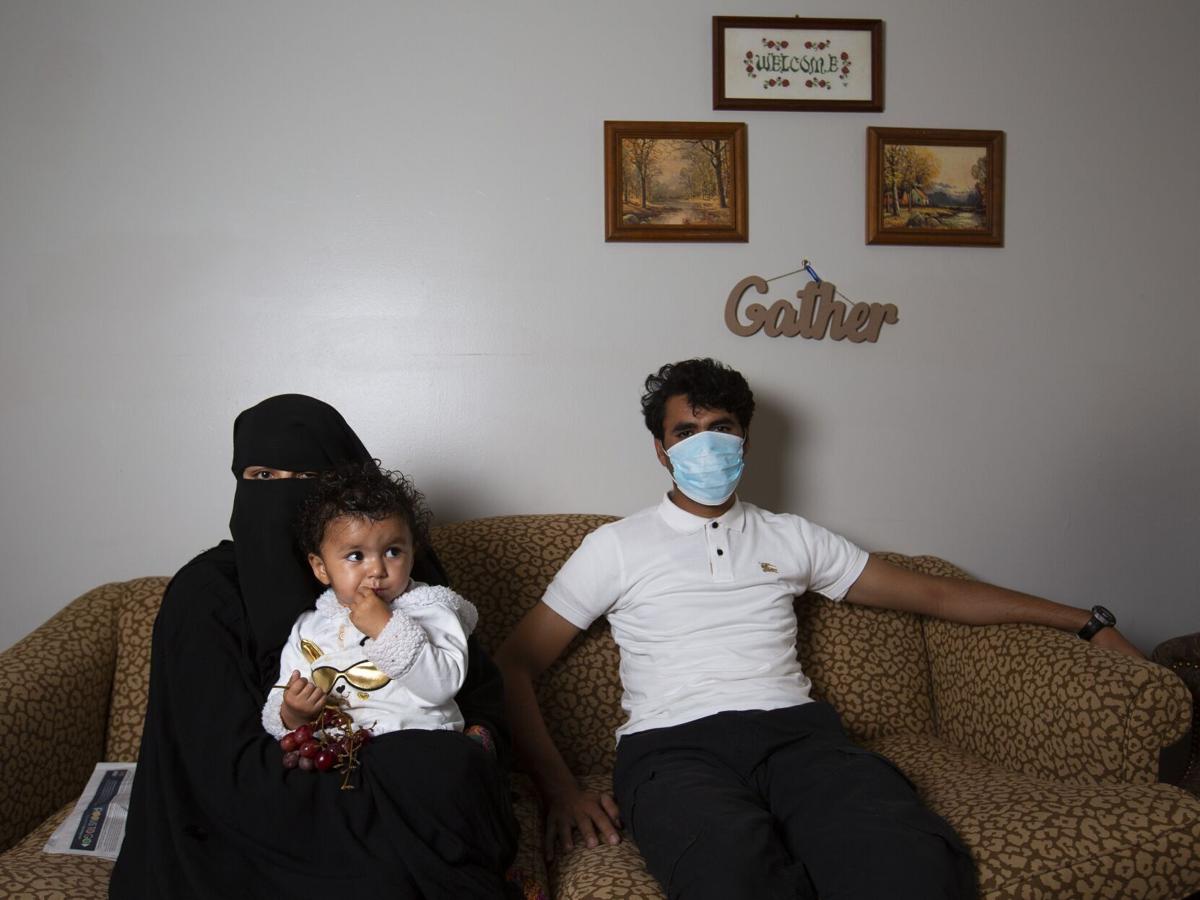 A young Afghan family sits for portrait in their new apartment in northern Greensboro on Tuesday, Oct. 5, 2021. The family,  sponsored by the College Park Baptist Church, recently arrived in Greensboro. They are the first family of Afghans to arrive in the Triad. The father was shot while helping the American soldiers. The newborn was born en route to Germany. 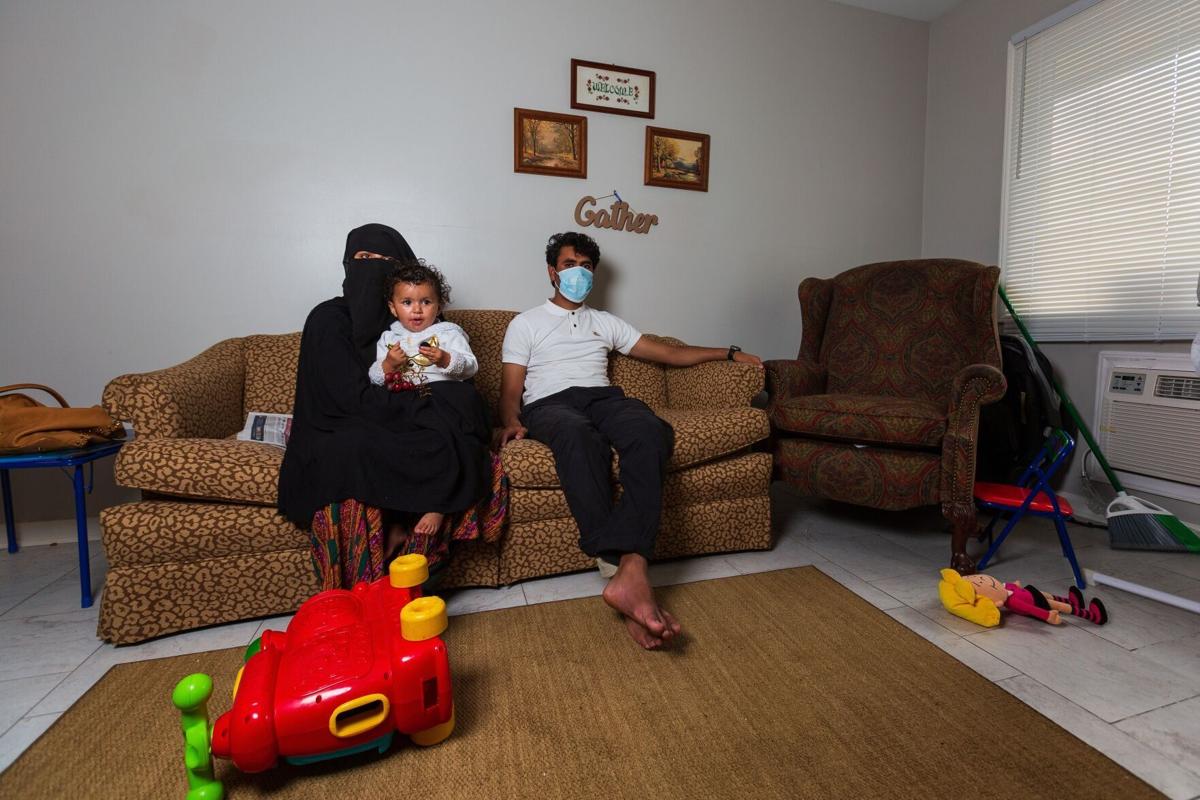 A young Afghan family sits for a portrait in their new apartment complex in northern Greensboro on Tuesday. The family, sponsored by the College Park Baptist Church, is the first to arrive in the Triad. 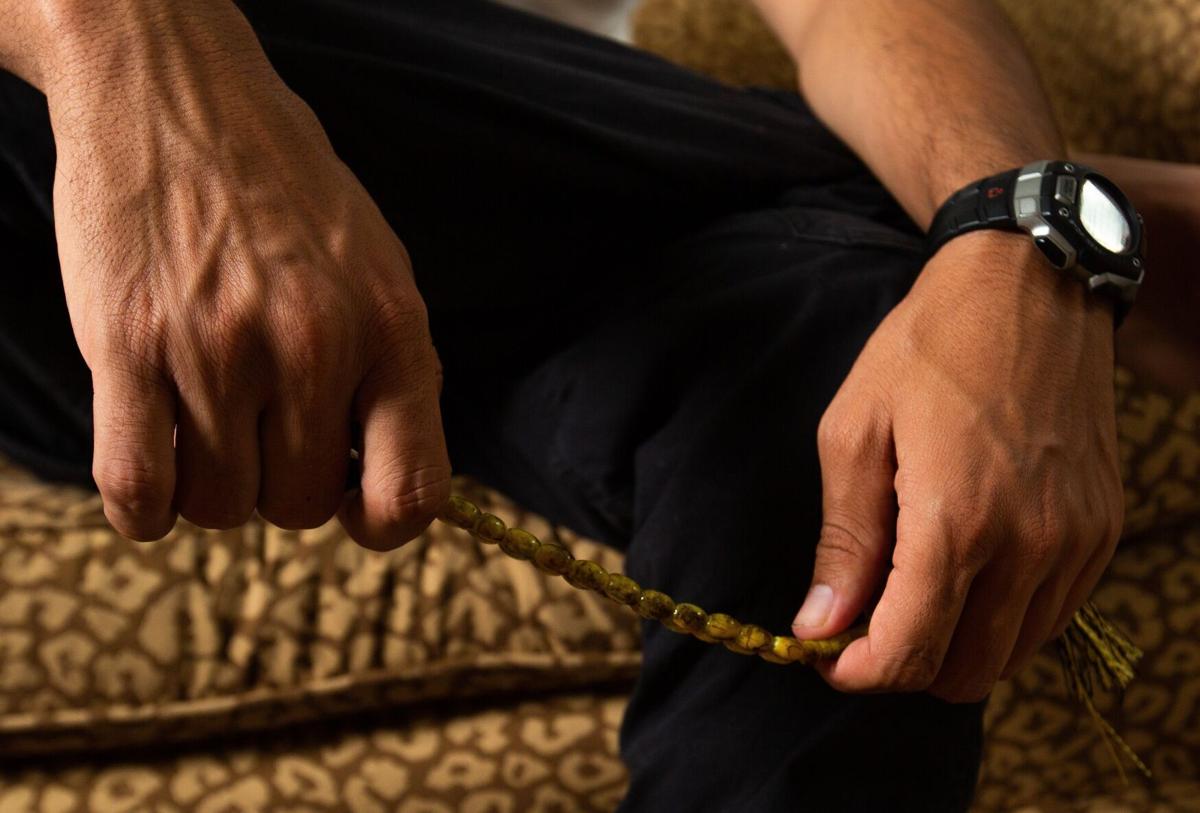 A young father holds prayer beads, used for worship, at an apartment complex in northern Greensboro on Tuesday. The father, who was in a wheelchair, said he was shot while helping the American soldiers. His youngest daughter was born aboard the flight from Afghanistan to Germany.

GREENSBORO — The father, nursing two gunshot wounds from fighting alongside American soldiers, pulls out his cellphone and cues a video that shows his wife carried down the steps of an airplane on a stretcher after the birth of their daughter.

The month-old baby was delivered by another female passenger on the floor of the aircraft as it headed to an American airbase in Germany during the military withdrawal out of war-torn Afghanistan.

“The pilot came and gave me the sign,” said the smiling 27-year-old father through an interpreter, holding one thumb up. “All over the world they are surprised to see a baby is born on the plane.”

The young family, including the 22-year-old mother and their 2-year-old daughter, are the first Afghans to arrive in the Triad and among the first in the state. Their names aren’t being released to preserve their privacy as they get accustomed to their new surroundings.

Mariam Shahnawaz, formerly a registered nurse at Moses Cone Hospital who spent a year serving as an interpreter for the U.S. military in Afghanistan, was translating for the couple on Tuesday.

“We are thankful the children are safe and that we are safe,” said the mother, cradling her newborn daughter. “Our families are in danger right now in Afghanistan, and we’d be happy if there was a way for them to be safe. All who worked with the Americans — they are in danger.”

The congregation at College Park Baptist Church prepared housing for the family in north Greensboro complete with a washer and dryer, mattresses and fresh linen in the bathrooms. The church also put down a deposit and paid the first few months of rent.

Resettlement agencies like the North Carolina African Services Coalition, Church World Service and World Relief Triad have been put on notice as new Afghan arrivals are processed at military bases. With tens of thousands expected to enter the U.S. in the weeks and months to come, they are busy preparing locally and reaching out to the community for help.

Nearly 20 people — including a family of six — are expected to arrive this week, said Million Mekonnen, the executive director of the African Services Coalition, who added that resettlement agencies will need help to handle the influx of refugees.

Some of those needs range from providing warm meals for arriving families to pledging support of some sort in the months to come.

As this couple shared their story on Tuesday, their daughter snacked on grapes and played with the toys the College Park congregation has provided.

After arriving at Piedmont Triad International Airport late last week, they thought they were headed to Virginia because other Afghan families were going there. The family speaks Pashto, not Arabic, which is common in their home province as a first language.

At first, the couple thought they would be left on the streets of Greensboro. That was until they saw the balloons and signs at the end of the concourse.

That hadn’t been explained to the family when they left a military base in Texas.

“So now I am OK,” said the father through the interpreter, while holding special beads for praying.

By Tuesday, the husband and wife were more relaxed and had met other local families that spoke Pashto.

The father held onto an “Air Force Reserve Command” patch soldiers had given him long ago. He had worked alongside the Americans since he was a teenager in a province outside Kabul called Laghman.

About two months before his family was airlifted out of the chaos of Kabul, he said he was with American soldiers shortly after midnight when the Taliban ambushed them as they walked along a road.

“They were hiding,” the father said. “We were hit by bullets.”

He was shot twice as he dove to the ground. An American near him died of his gunshot wounds, he said.

The other American soldiers carried the young Afghan to safety and later transported him to Jalalabad, the country’s fifth-largest city, for surgery to remove the bullets.

He now has difficulty walking, but is able to take labored steps.

Members of College Park Baptist are talking to local physicians and health care groups about helping the family while Mekonnen’s agency is working with Cone Health on providing basic health care.

This family and others like them now being placed across the country are referred to as “humanitarian parolees” and initially weren’t entitled to the same rights and federal benefits as refugees who have spent years and even decades in camps before being allowed into the United States.

Over the weekend that changed through new federal legislation, and they will get additional benefits such as food stamps. Still, there are lots of gaps to cover in the towns and cities that will be their new homes.

At College Park, the church has set up committees and group emails on a variety of things most of us take for granted.

“They’d like to go out and leave the apartment,” the Rev. Mike Usey shared with members.

On Tuesday, as the father’s eyes gazed around his new home, his mind and heart were looking elsewhere. To the future.

He says he is thankful to the Americans who got him here and to those who have provided for his family.

He wants to work when he can.

He wants to know if his youngest daughter will have American citizenship because she was born on the military plane.

He says he hopes his children will make a difference in the world.

“I wish that they get highly educated,” he said.

He then looked at his oldest daughter.

“I’m hoping that this one gets the education and becomes the president of Afghanistan.”

No quarantine required in Sydney for vaccinated international travelers

No quarantine required in Sydney for vaccinated international travelers

"The police department cannot speak on the motive for this homicide, as the investigation is ongoing, but investigators do not believe this to be a random act nor are any further suspects being sought," authorities announced in a Monday evening news release.

One customer described a fight involving the employee and another man around 7 p.m. Monday.

N.C.'s lieutenant governor now seems to say his controversial comments were in reference to sexually explicit material he alleges “is currently in North Carolina schools." No mention was made of those books in previous complaints he lodged against public schools in North Carolina.

Stephen Roszel was preparing for his “dream job” teaching Advanced Placement government and social studies at Monacan High School this year when the Chesterfield School Board adopted a mask mandate, a move recommended by the federal Centers for Disease Control and Prevention, then required by the state.

N.C. boasts a bounty of butterflies. Here's a closer look at just a handful of them

Gabriela Garrison, the Eastern Piedmont Habitat conservation coordinator for the N.C. Wildlife Resources Commission, shares some of her favorite butterflies with readers.

October rolls around and we all start wondering when that brilliant fall foliage will follow.

A Statesville pastor was arrested for a second time on sexual exploitation of a minor charges.

NC man dies in standoff with police in Winston-Salem

A man was in the house that police had surrounded on Main Street in between Garland and Avondale streets, according to WGHP/Fox 8 News, the Journal’s news gathering partner.

A young Afghan family sits for portrait in their new apartment in northern Greensboro on Tuesday, Oct. 5, 2021. The family,  sponsored by the College Park Baptist Church, recently arrived in Greensboro. They are the first family of Afghans to arrive in the Triad. The father was shot while helping the American soldiers. The newborn was born en route to Germany.

A young Afghan family sits for a portrait in their new apartment complex in northern Greensboro on Tuesday. The family, sponsored by the College Park Baptist Church, is the first to arrive in the Triad.

A young father holds prayer beads, used for worship, at an apartment complex in northern Greensboro on Tuesday. The father, who was in a wheelchair, said he was shot while helping the American soldiers. His youngest daughter was born aboard the flight from Afghanistan to Germany.