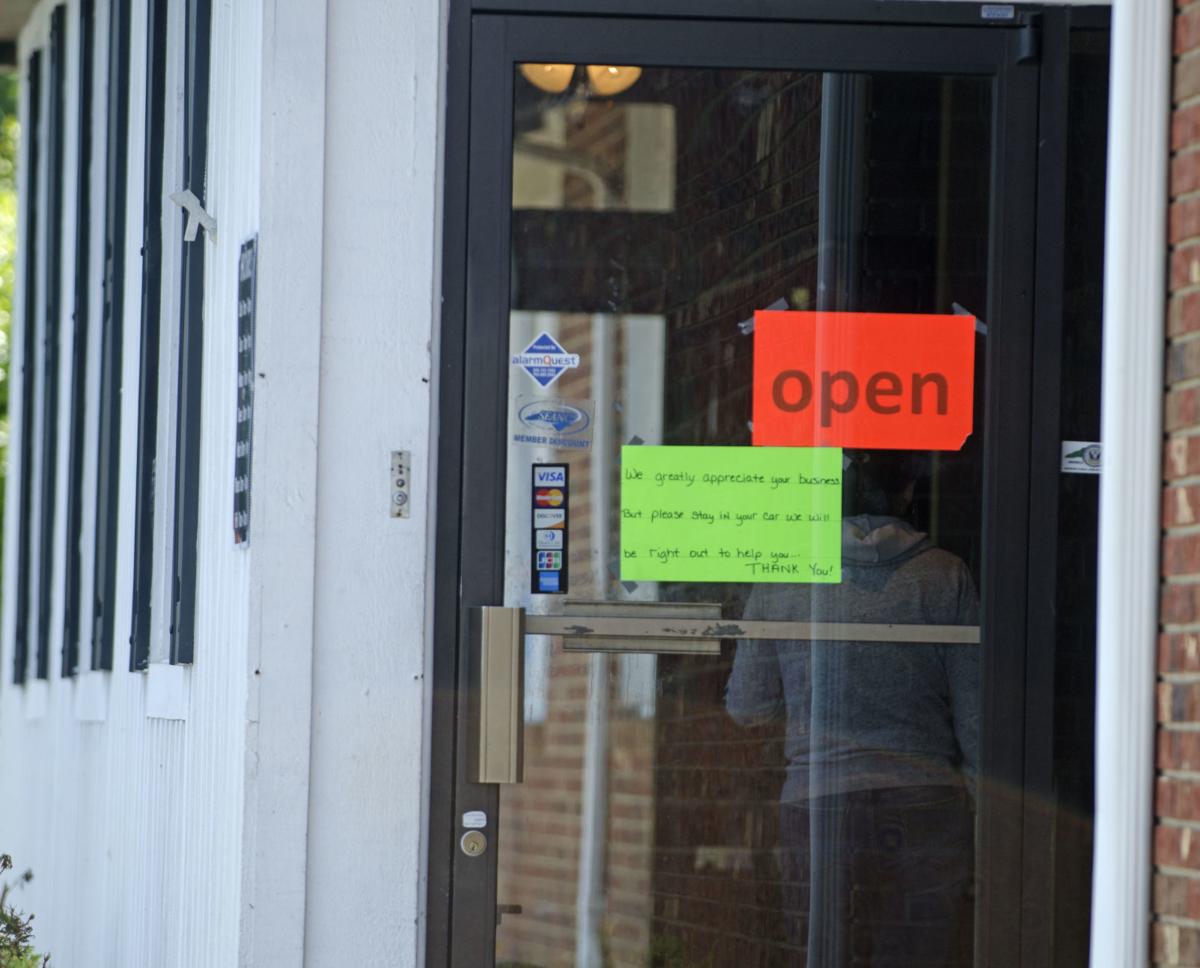 The door to Boxcar Grille bears signs advising people to stay in their cars on May 11. 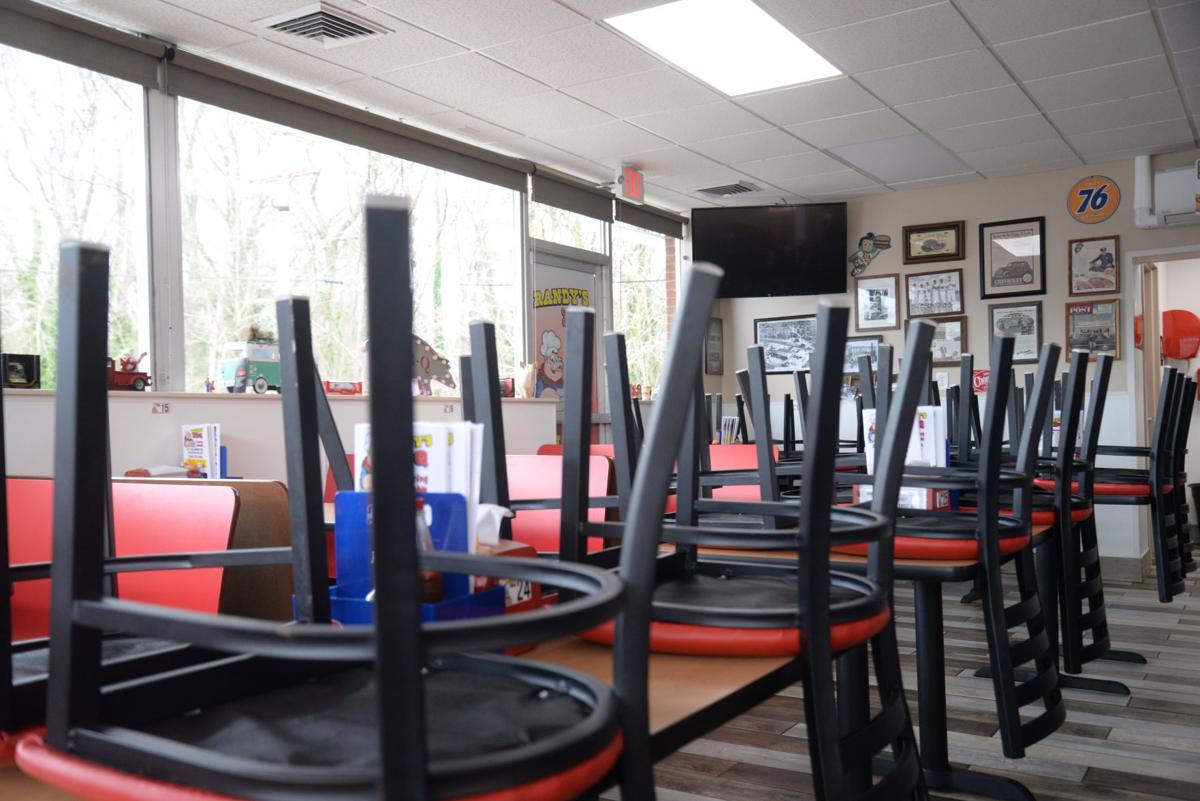 The dining area of Randy's BBQ in Statesville was empty during lunch hours in March.

Restaurants were some of the first businesses to be hit hard by the conronavirus pandemic. Being limited to takeout orders and curbside pickup have caused owners already working on slim margins to make tough decisions, with many having to cut staff or just close to weather the financial gut punch.

April Bolick co-owns two Boxcar Grille locations with her husband Jeff: one in Statesville and one in Claremont. In March they had to cut more than 100 employees between the two restaurants.

Bolick said Monday that after getting a loan through the Paycheck Protection Program in mid-April, they’ve been able to hire back a fair amount of staff.

“We actually didn’t take everything we qualified for,” she said. “We thought we’d leave (the rest of the money) for other businesses that needed it.”

Still, Bolick said her restaurants are operating at around a 50% revenue loss. A March 17 order from Gov. Roy Cooper restricts restaurants from offering dine-in services, forcing them to rely on takeout orders.

“We’re blessed that we still have our catering (orders),” Bolick said. “We’re doing a tremendous amount of that.”

Robin Pittman is the co-owner of Randy’s BBQ, which has locations in Statesville and Troutman. She called the current financial climate new terrain.

“We’ve run restaurants since 1985 and have never had anything like this,” she said.

Similar to Bolick, Randy’s has been operating on less than half its normal revenue; Pittman said she’s got about a quarter of her former staff showing up to work.

And while there have been various groups across the state that have called for a return to normalcy, operating at full-steam right now is something both owners described as almost impossible.

Bolick can no longer rely on her main food provider and is having to run to three to four different distributors a day just to meet what’s needed for her daily output. She also said she’s seen an uptick in the price of things like chicken wings and hamburger meat by about 50%.

“It would be a struggle just to get the food we’d need if we did open,” Bolick said. “We ordered 100 pounds of frozen hamburger yesterday just to get through this week. The quality is not what I’m used to buying, but I can’t get what I used to.”

some pork cuts, basically an essential meat for a barbecue joint, double in price. She saidit’s hard to tell how much barbecue to make for a single day. It’s a 12-hour cooking process and they would normally base how much to cook on last week’s orders. She said she also can’t change the menu price for customers each time her distributors charge more, so depending on what plate she’s selling Pittman could be losing money.

She also has to choose what she keeps in the restaurant pantry more carefully. She added she has to buy things that her restaurant already has plenty of in stock now because they may not be available in the coming weeks.

The story is slightly different at Groucho’s Deli in downtown Statesville. Owner Cindy Sutton said that while her distributor hasn’t been charging higher prices, some days it just doesn’t have certain items. On May 5, Sutton added Groucho’s posted on Facebook it had to close because the supplier had cancelled the shipment of food. That’s also left them turning to grocery stores to make up for their inventory.

“Our costs are up substantially and that’s really hurting businesses,” she said.

Sutton said Groucho’s has been lucky that as a deli they’re more suited to takeout than other restaurants can be. She also said the restaurant the third-party food delivery service Door Dash balance some lost income.

But Door Dash does take a percentage of Groucho’s profits for each it delivers. Sutton also mentioned that her business still has to pay it’s franchise fee regardless of the pandemic.

As for her employees, Groucho’s hasn’t laid off any staff. Sutton did say those who have their pay checks supplemented with tips aren’t seeing the same cash flow due to the lack of dine-in service, so paying everyone their usual wages is another added cost.

Sutton was happy to say her PPP loan got approved this week.

For Bolick, having less food available isn’t the only shortage she’s dealing with. While that PPP loan she got was able to entice much of her former staff to return to work, she said she has to contend with some of her former employees making more money on unemployment benefits than they would on the restaurant floor. Those that didn’t come back also get to stay at home where there’s a lower risk of catching COVID-19.

Pittman said she filed for PPP loan more than a month ago and is still waiting to hear back on the results. She’s lucky that she and her husband have been able to save up some money to cushion their business if need be, but said if the loan doesn’t come through they will have to adjust anyway they can.

The door to Boxcar Grille bears signs advising people to stay in their cars on May 11.

The dining area of Randy's BBQ in Statesville was empty during lunch hours in March.