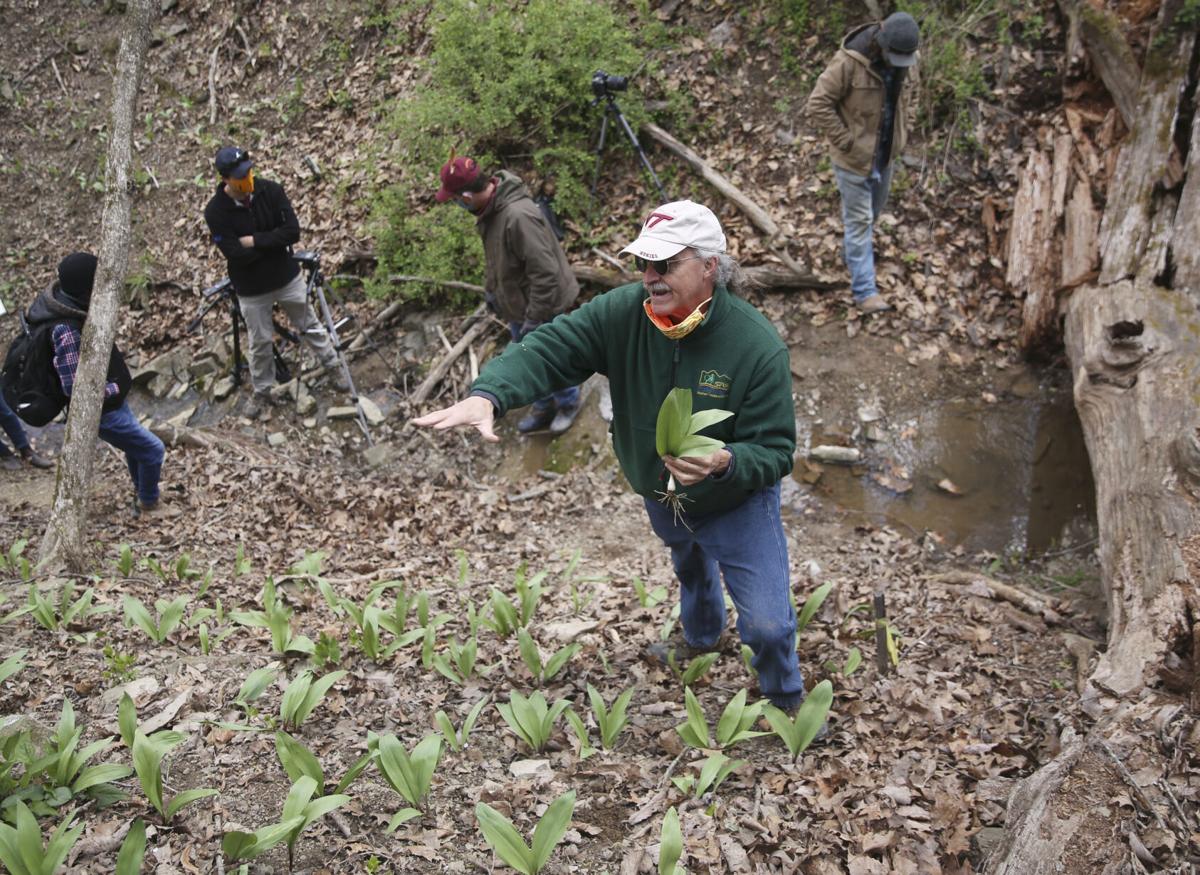 Jim Chamberlain, a research forest products technologist with U.S. Forest Service based out of Blacksburg, looks over a forest hillside covered with ramps at the Catawba Sustainability Center. Chamberlain has been working with Virginia Tech on sustainable forest farming of ramps, as demand for the Appalachian plant has grown. 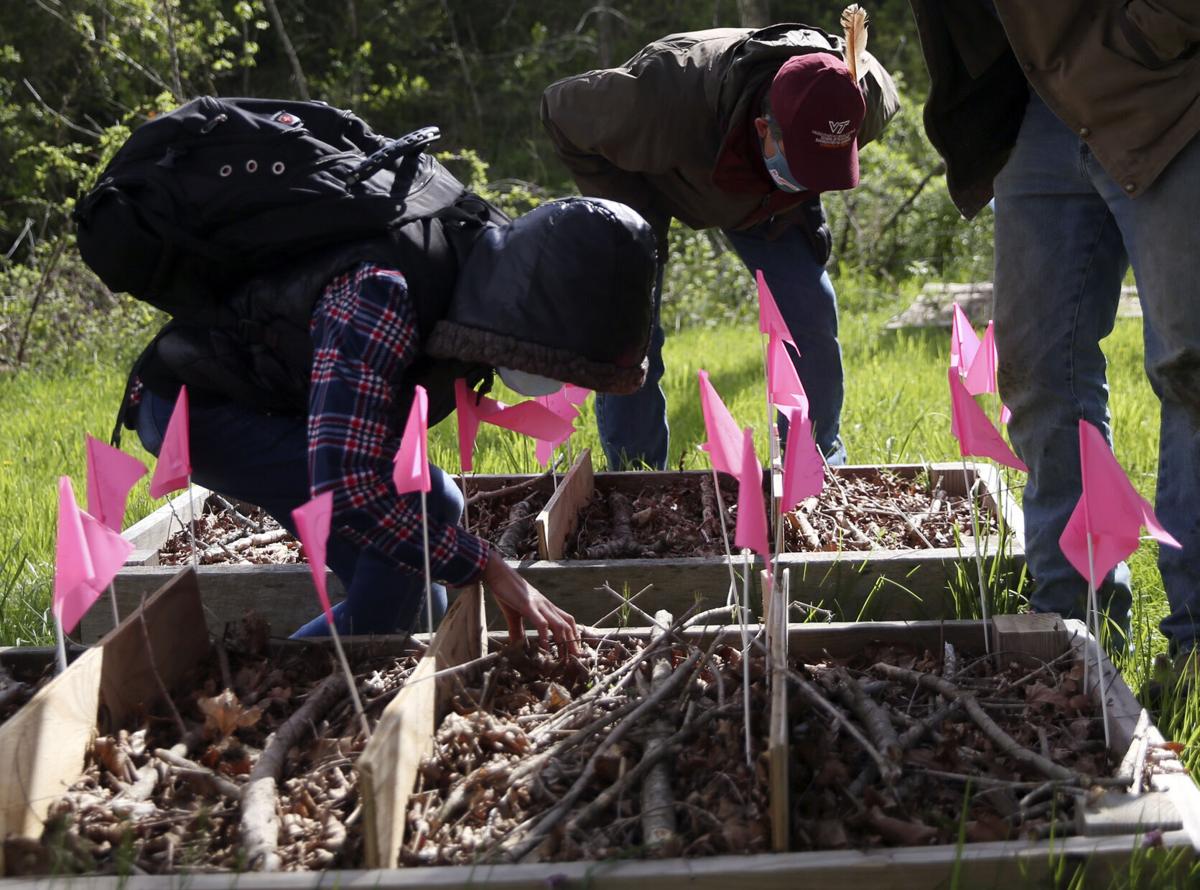 Pabitra Aryal, a PhD student in the School of Plant and Environmental Sciences at Virginia Tech, left, looks to see if any of the ramp seeds she planted are growing in the raised beds at the Catawba Sustainability Center. Aryal is researching ways to increase the plant’s sustainability. 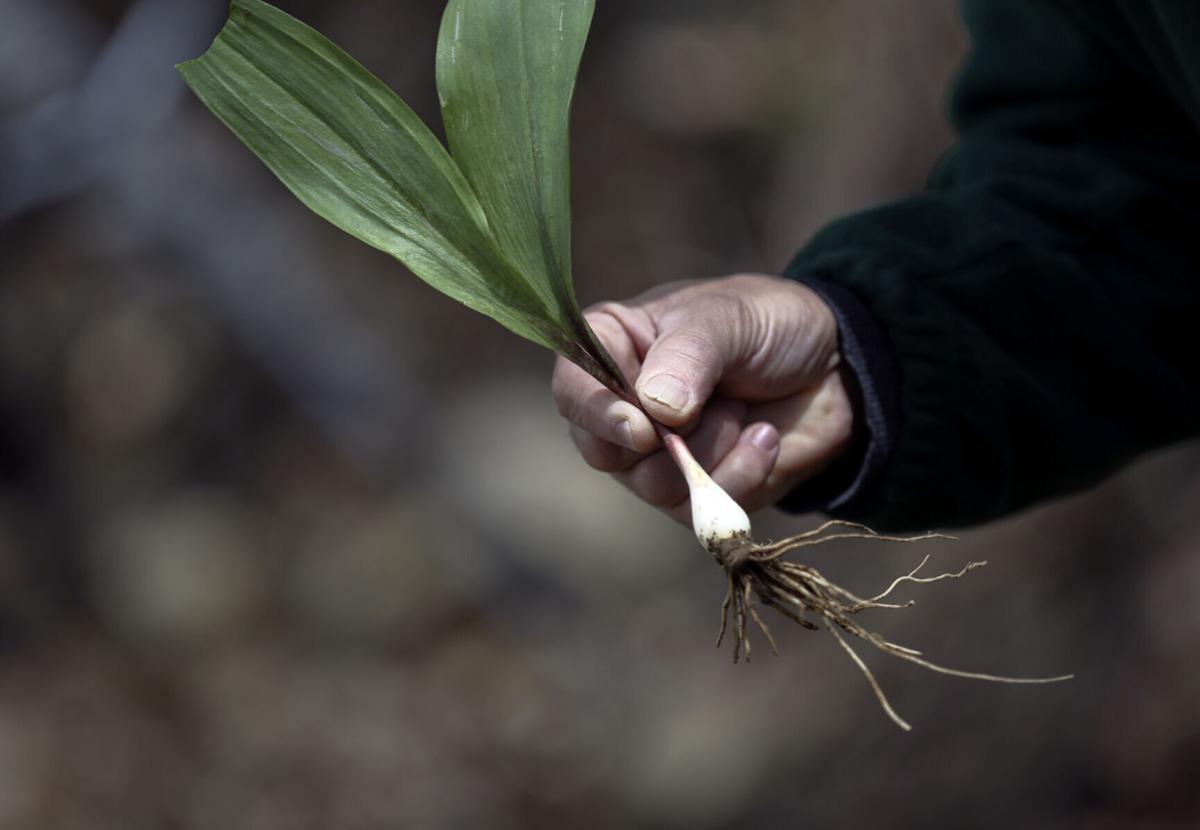 Jim Chamberlain, a research forest products technologist with the U.S. Forest Service, holds a ramp grown through forest farming at the Catawba Sustainability Center in partnership with Virginia Tech. 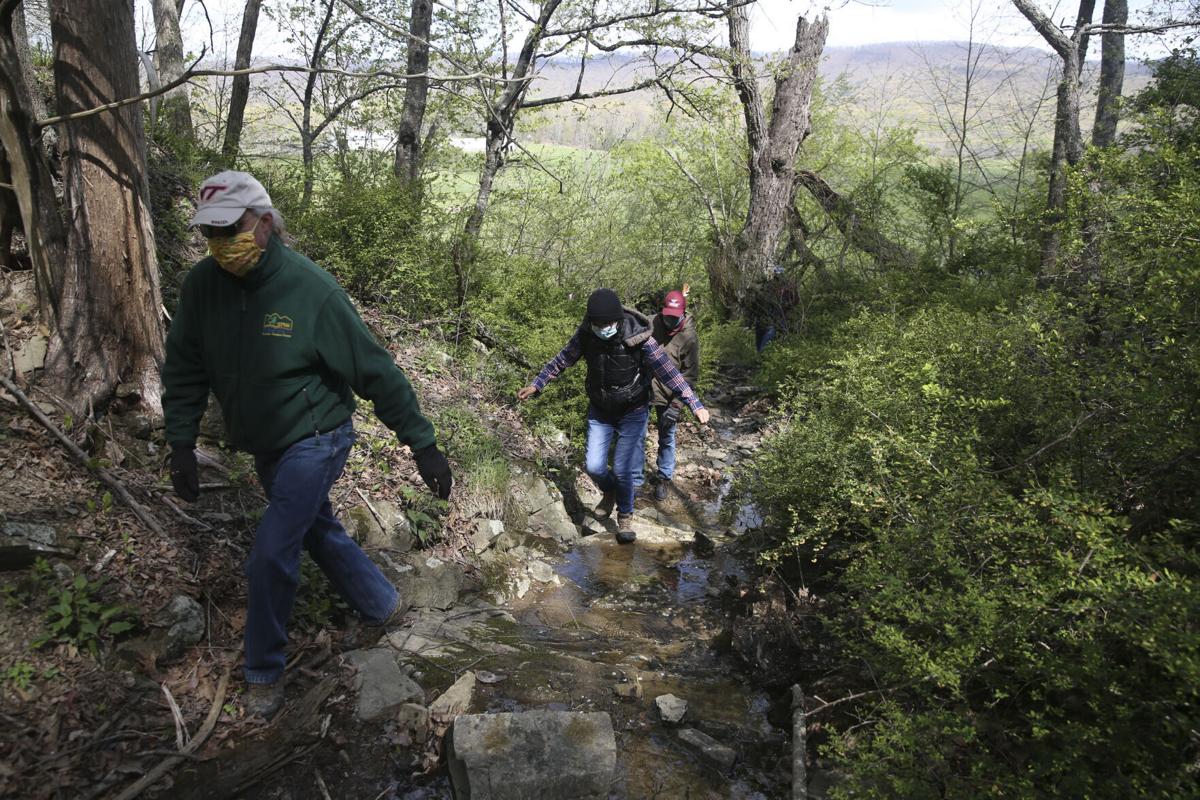 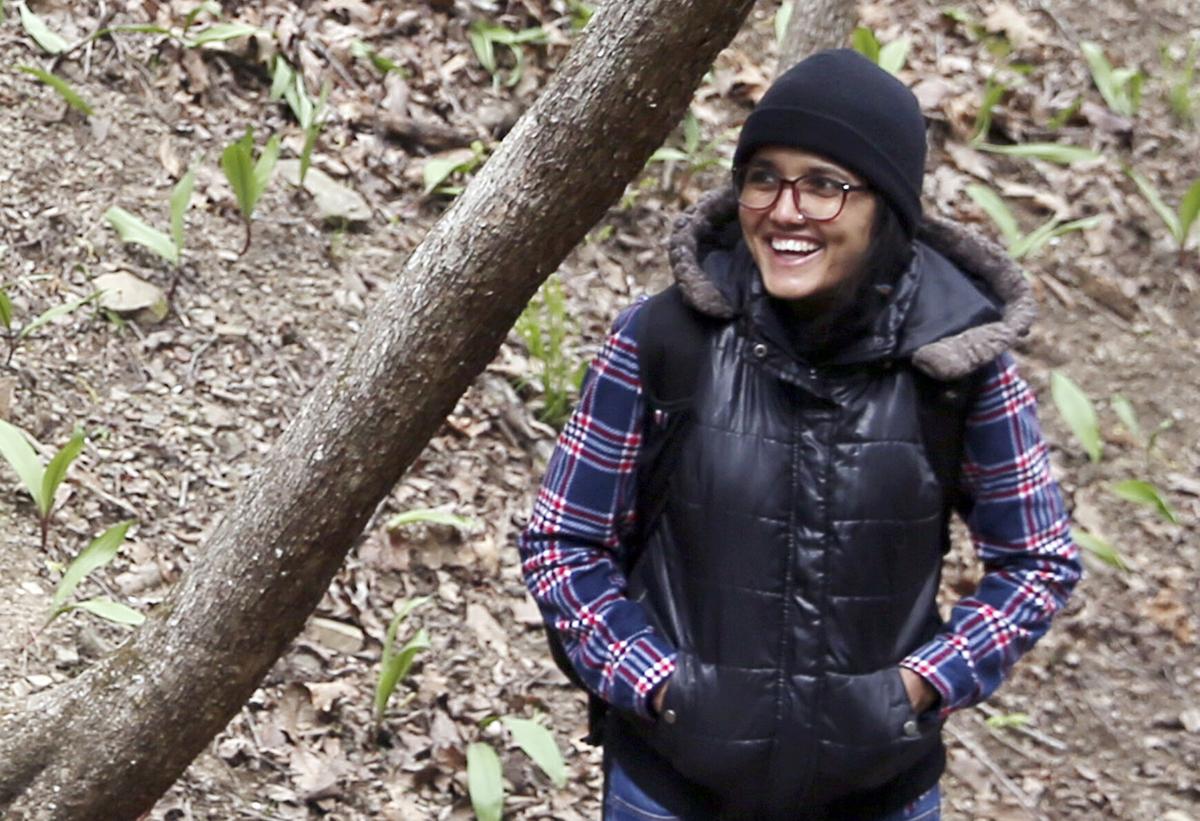 Pabitra Aryal is a Ph.D. student in the School of Plant and Environmental Sciences at Virginia Tech. She is studying the best production techniques for ramps.

On a chilly April day, a group treks through the forest at Virginia Tech's Catawba Sustainability Center in search of ramps.

But they aren’t looking to forage the plants, also known as wild leeks. This team from Virginia Tech and the U.S. Forest Service is studying the best production techniques for ramps.

Ramps, which are native to the Appalachian region, have grown increasingly popular, particularly in the culinary world. Experts say the intense interest in ramps, along with their limited window of availability each year, put them at risk of being over-harvested.

Pabitra Aryal, who is working toward a doctorate in crop and soil environmental science at Virginia Tech, is researching ramps from a number of angles.

She is growing ramps from seeds at the Catawba Sustainability Center to see how long it takes the plant to germinate. Local knowledge indicates it can take up to seven years, but it hasn’t been studied much.

Aryal is also studying the effect of Endomycorrhizal fungi on the growth of ramps, as the fungus has a symbiotic relationship with a number of other species and could perhaps help ramps thrive.

Aryal said she collected samples from throughout the Appalachian region to study whether the growth rate or characteristics differ by location, known as ecotypic variation.

Ultimately, Aryal said she hopes her research will have practical uses for farmers, helping them to determine if their land is suitable for growing ramps and the best methods to use.

If farmers were to grow ramps, it would not only reduce pressure on the wild population, but it would also help them use forest land that isn’t suited for other crops, and possibly earn extra income.

Adam Taylor, manager of the Catawba Sustainability Center, said the goal is not to stop people from enjoying ramps, but to increase education and awareness around the plant and encourage people to use sustainable harvesting methods.

Taylor attributes the increased interest in ramps in part to “the resurgence of Appalachia.”

“People are finding nostalgia in things that Appalachian people have done for years and years and trying to replicate that,” he said.

It’s trendy now for chefs to put ramps on the menu at their restaurants. Taylor said they can be part of the sustainability effort by knowing where their product comes from and asking if the ramps were grown or harvested from the wild.

Jim Chamberlain is a research forest product technologist with the U.S. Forest Service, where he focuses on non-timber forestry — “think food and medicine,” he said. Chamberlain, who is based in Blacksburg, Virginia, has studied ramps for 25 years.

Ramps are a spring ephemeral, meaning they have a short growing period. If you’re hiking in March or April, Chamberlain said, you’re likely to come across ramps. Some people hit the trails in the spring with the goal of foraging the plant.

Chamberlain traces the buzz around ramps back to a Martha Stewart piece in the ’90s. Additional news coverage from outlets like The New York Times and Cooking Light, coupled with ramp festivals, only strengthened interest in and demand for the plant. Foraging grew in popularity, and those who didn’t want to search the forest for the plant could search online.

When foragers harvest the entire plant, including the bulb and roots, they prevent it from reproducing, Chamberlain said. Instead, he said, they should just cut the leaf of the plant and leave the rest to regenerate.

While there’s been a push to spread that message, Chamberlain said it will take time for that shift to occur. He said chefs could help by indicating that they want only the leaf.

Chamberlain said the problem of over-harvesting calls for a two-part solution: promoting harvest methods that promote sustainability, and getting more people to grow ramps.

Reducing pressure on the wild harvest

Alexis Meyer and Ned Savage are working to cultivate ramps on their Craig County farm, a project they took on during the pandemic. Both became interested in ramps while working and living in West Virginia, where they said patches are more plentiful.

Ed Daniels, who began growing ramps on his own West Virginia farm after noticing the depletion of the wild population foraged by his family for generations, provided Meyer with about 25 pounds of ramps to get started.

Daniels said he’s grown concerned about ramps becoming endangered. He expects more rules and regulations may be imposed on foraging, something he looks forward to as it might help to protect the plant. He prefers to sell in small volumes to customers who want to cultivate the plant themselves.

Earlier this year, Daniels got a call from someone in Pennsylvania looking to buy 300 pounds of ramps. Though he offered $9 to $10 a pound, Daniels said he passed. His priority is the longevity of his plants, and selling such a large quantity could threaten that.

But Meyer was his ideal customer. One of the reasons she wanted to establish a ramp population at Savage Acres was to educate more people about the plant. Meyer was able to share the bounty of ramps she received from Daniels, leading about seven others to grow the plant on their properties.

“Establishing cultivated populations, even expanding their range into our area, that really can reduce some of the pressure on the wild harvest,” Savage said.

Meyer did sell a pound to one Roanoke restaurant this year. It’s not clear to Meyer how ramps became such a “hot foodie trend” but she’s glad it’s sparking more conversation around edible foods from the forest.

“I think it’s important that people connect to the things that are readily available,” Meyer said.

For those unfamiliar with ramps, Savage described them as “incredibly pungent and just packed with flavor.” To enjoy ramps, Meyer said, you probably need to be a fan of garlic and onions. She likes to use ramps to make pesto.

While some cook with only the leaf of the plant, others use the bulb. While the most sustainable method of harvest would involve leaving the bulb and roots, Savage said the plant can be cut so that the majority of the bulb can be used for culinary purposes but the roots stay intact. He also recommended foragers take only one leaf from a plant and harvest no more than a third of a patch.

Nate Sloan, owner and executive chef at Bloom in Roanoke’s Wasena neighborhood, said ramps signal the change in season, which is what drives the restaurant’s culinary vision.

“It marks the beginning of spring and it’s something that regionally is very important and has always been a part of the culture in the Appalachian mountains,” said Sloan, who grew up in Franklin County.

Ramps are a versatile ingredient, Sloan said, and can generally be substituted for onion or garlic, since it has a similar flavor profile.

Currently, Sloan said, ramps can be found in about 40% of the items on his restaurant’s menu. They appear in an aioli served with potatoes, they’re stir-fried in a beef dish and they’re used for pesto and a chimichurri sauce.

The restaurant generally uses only the leafy green part of the plant, he said, as it’s the most sustainable way to enjoy ramps.

“It’s really important for us that we work with foragers or individuals that understand the importance of sustainability and that this is a very precious ingredient for our region,” Sloan said.

Foragers should view themselves as caretakers, he said, and know what needs to be done to ensure the plant continues to thrive. Bloom’s ramps are either harvested personally by Sloan — he has access to a patch on a family friend’s land — or sourced from experienced foragers who use sustainable practices.

Just like chefs promote grass-fed beef, Sloan said, they should promote the sustainable harvest of wild ingredients like ramps.

“It’s just kind of something you owe to the Earth as a chef,” he said.

A homeless man's dog was shot and killed outside a store in western NC. Suspect faces animal cruelty charges.

This man's best friend will be missed. The man's dog was shot outside a store in Morganton, N.C. Another Morganton man is facing charges after turning himself in.

Accused abductor may have targeted other children in Virginia, sheriff's office says

A search involves a woman who reportedly took the child and was driving a van or SUV.

Police found a man’s body inside the burned home at 526 Lockland Ave. in Winston-Salem.

BRISTOL, Va.—A grand jury in Bristol, Virginia, has indicted a city police officer on a murder charge in connection with a fatal officer-involved shooting.

After much work and effort, Copper Creek Distillery in Marion is producing quality liquor that is “hand crafted one drop at a time.”

The mother of a 5-month-old baby who died after being left in a car for several hours Sunday is facing a manslaughter charge.

Jim Chamberlain, a research forest products technologist with U.S. Forest Service based out of Blacksburg, looks over a forest hillside covered with ramps at the Catawba Sustainability Center. Chamberlain has been working with Virginia Tech on sustainable forest farming of ramps, as demand for the Appalachian plant has grown.

Pabitra Aryal, a PhD student in the School of Plant and Environmental Sciences at Virginia Tech, left, looks to see if any of the ramp seeds she planted are growing in the raised beds at the Catawba Sustainability Center. Aryal is researching ways to increase the plant’s sustainability.

Jim Chamberlain, a research forest products technologist with the U.S. Forest Service, holds a ramp grown through forest farming at the Catawba Sustainability Center in partnership with Virginia Tech.

Pabitra Aryal is a Ph.D. student in the School of Plant and Environmental Sciences at Virginia Tech. She is studying the best production techniques for ramps.