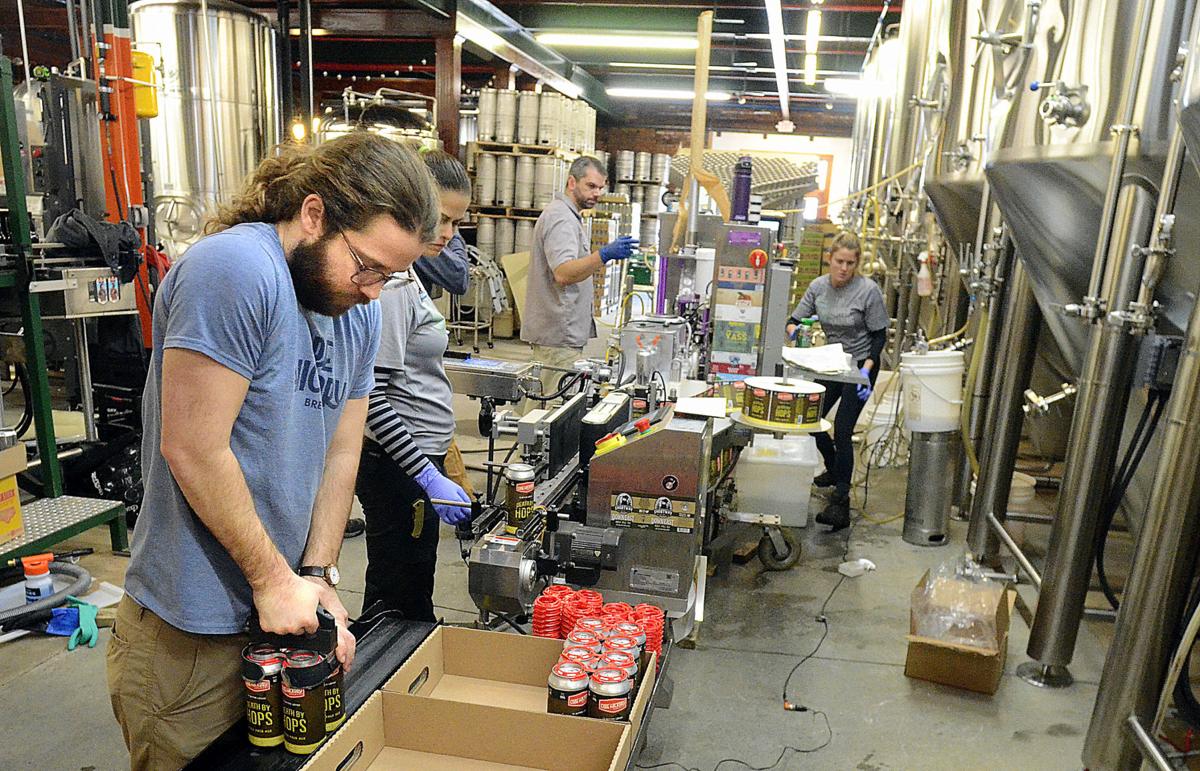 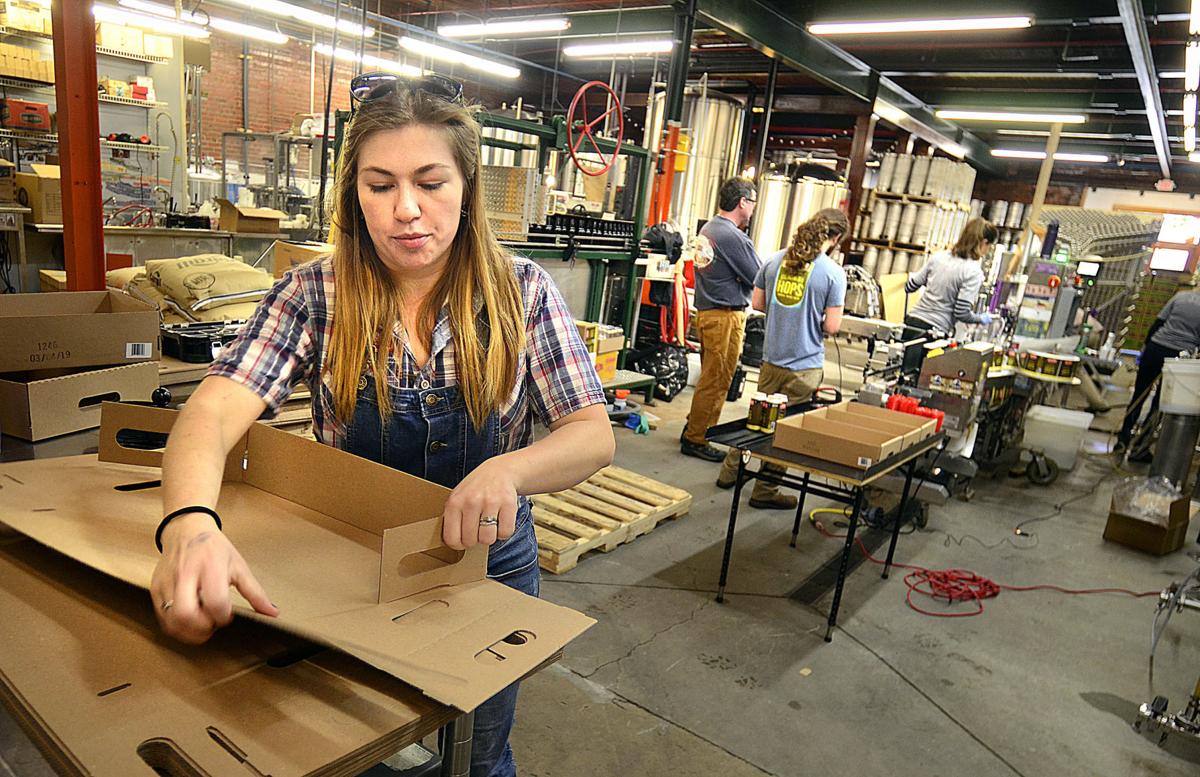 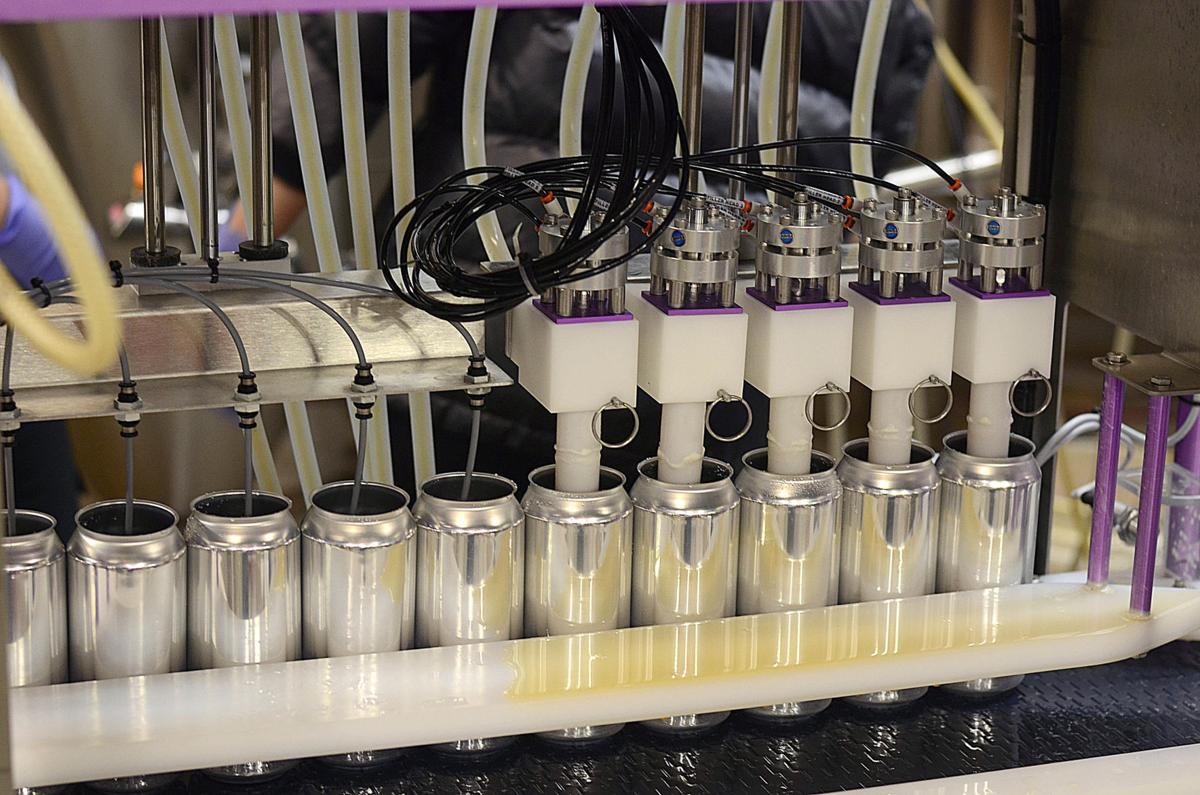 Cans are filled with Death By Hopes India Pale Ale during the canning process.

Craft beer – another great-tasting snob hobby that I and many others in America have grown to love – has been in our community since 1994. Hickory is lucky.

I first experienced Olde Hickory beer at a pint night at City Lights Café in Sylva (west of Asheville), which is a wonderful spot where I had the privilege of working while in college. City Lights was ultimately responsible for exposing me to good western N.C. beer.

The taste was clean, refreshing and smooth. I also remember the red logo stickers, which reminded me of a retro gas station sign, distributed throughout the cafe.

Since I began working at the Record, I learned that the recent craft beer craze was already established in the Catawba Valley years ago.

There is still plenty of news to tell.

Steven Lyerly, owner and head brewer of Olde Hickory Brewery, and his team fired up their new canning system for the second time on March 4. Death By Hops, an India Pale Ale, is Olde Hickory's first beer to be canned in four-packs of pints with the Piedmont Pilsner and Brown Mountain Light to be canned in the future.

“They (cans) allow beer to travel where glass cannot. Places like the beach, pools and golf,” Lyerly said.

“Many folks simply like cans for other reasons. Other folks prefer glass. We do not see us moving away from glass bottles, but we see a place in our portfolio for both,” he said.

Olde Hickory joined the N.C. Department of Agriculture on an invitation to the Horecava International Trade Fair in Amsterdam, Netherlands for a week in January. The event has highlighted the hospitality industry since the 1950s.

Not only were they pouring brews for visitors from all over the world, Lyerly and business partner Jason Yates brewed two Dutch collaboration beers.

Lyerly said the beers are called Arch and Dove, brewed with Brouwerij de Molen, and Haarlem Hickey, brewed with Jopen Bier. All of the malt used was European but some of the hops used in the beers were from the Pacific Northwest of the U.S.

“Both beers are being barrel aged, so they have several more months before they will be ready. They will be served draft and bottles in Netherlands and we are working channels to get the beers imported here. If successful, they will of course be served here in Hickory, and possibly elsewhere in the state,” Lyerly said.

Lyerly and Yates also hosted events with retailers that sell Olde Hickory beer when they weren’t working at Horecava.

“We've been exporting to Europe for a couple years now, and Amsterdam is the biggest market. In addition to the Netherlands, we export to Germany, France and the United Kingdom."

Pink Boots and a wheat beer

Back in the U.S., a piece of Hickory was also represented at Pink Boots Society’s third annual Bière de Femme festival on March 2.

Pink Boots Society is a nationwide non-profit organization supporting the advancement of education for women with their hands in the beer industry. Asheville and Charlotte are home to Pink Boots chapters.

Sarah Todd – assistant brewer of Olde Hickory and Cornell University graduate who studied viticulture and enology (grapes and wine) – was invited to the festival as a guest brewer and proud pink boots wearer.

In addition to painting, biking and hiking, Todd has been interested in fermentation sciences since the seventh grade.

“I always knew I wanted to brew,” Todd said. “You basically baby the beer through the entire process. You’re testing the sugars, checking it for micros, making sure it gets in the bottle OK.”

She brewed a floral wheat beer for the festival called Flowers for Geirhild, which celebrates the legend Viking queen Geirhild Drivsdatter nicknamed “the Norse Goddess of brewing” and the brewing skills that got her to the throne.

“Also illustrating that back in the day, brewing was a women’s task because it was like cooking. You had to provide food, and you had to make the beer and the mead,” Todd said.

Todd stuck to the book on brewing the feature beer but added a classic Olde Hickory twist.

“It was really exciting. I used our hefeweizen yeast, so it’s a very traditional German yeast that really gives those kind of banana and clove aromas,” Todd said. “It was a little bit lighter, very drinkable and we added hibiscus and chamomile.”

Flowers for Geirhild will be available at the Olde Hickory Tap Room, Station and Amos Howards Brew Pub soon.

Olde Hickory will also be participating in the Carolina Championship of Beer on April 6.

The 17th annual Hickory Hops Craft Beer & Music Festival is April 27 from 1-6 p.m. in downtown Hickory and will feature over 50 breweries. Tickets are available at Olde Hickory Tap Room and Station, Amos Howard Brew Pub or online at hickoryhops.com.

Business happenings in the area:

The Natural Dog pet food market will open at 1916 Catawba Valley Blvd. SE in Hickory at the beginning of April.

Coach’s Neighborhood Grill to open in Hickory; location and date to be announced.

Cans are filled with Death By Hopes India Pale Ale during the canning process.