PHILADELPHIA (AP) — A man charged with raping a woman on a commuter train just outside of Philadelphia harassed her for more than 40 minutes while multiple people held up their phones to seemingly record the assault without intervening, authorities said.

More than two dozen train stops passed as the man harassed, groped and eventually raped the woman, the police chief for the Southeastern Pennsylvania Transportation Authority said at a news conference Monday.

Police do not believe a single witness on the train dialed 911. They are investigating whether some bystanders filmed the assault.

Both the man and woman got on the train at the same stop Wednesday night in North Philadelphia. Officers pulled the man off of the woman at the last stop. They responded within about three minutes of a 911 call from a transportation authority employee, authorities said.

"What we want is everyone to be angry and disgusted and to be resolute about making the system safer," SEPTA Police Chief Thomas J. Nestel III said at the news conference.

The affidavit of arrest for Ngoy detailed times of the assault, including that during those 40 minutes the woman appears to repeatedly push Ngoy away.

Nestel would not give an approximate number of witnesses, and it was unclear from the affidavit how many passengers were present for those 40 minutes. Authorities have not released the surveillance video.

"I can tell you that people were holding their phone up in the direction of this woman being attacked," he said.

Elizabeth Jeglic, a psychology professor at the John Jay College of Criminal Justice, researches sexual violence prevention. She said if people feel uncomfortable physically intervening, there are other options like calling the police.

"When we have multiple people, people don't necessarily intervene," she said. "However, more recent research actually suggests that looking at video footage of more extreme circumstances that up to 90% of cases we do see people intervening. So it was actually somewhat of an aberration in this case that somebody did not step forward to help this individual."

Superintendent Timothy Bernhardt, of the Upper Darby Police Department, has said surveillance footage showed other riders were on the train and someone "should have done something."

Police: Woman raped on Pennsylvania train as bystanders did nothing

The New York Times reported that Bernhardt said that people who recorded the attack and failed to intervene could possibly be charged, but that would be up to the Delaware County District Attorney's office to determine.

There were no calls made to 911 in Philadelphia. Nestel said police were still waiting for Delaware County 911, which covers the last two train stops, to determine if it received any calls.

Investigators said in the affidavit that Ngoy sat down next to the woman about a minute after he boarded the train car, shortly after 9:15 p.m. The video shows her pushing him away multiple times until he is seen ripping her pants down at about 9:52 p.m.

Bernhardt said officers arrived at the 69th Street terminal on the Market-Frankford Line, the busiest route on SEPTA, around 10 p.m.

A SEPTA employee who was in the vicinity as the train went past called police to report that "something wasn't right" with a woman aboard the train, Bernhardt said.

SEPTA police waiting at the next stop found the woman and arrested Ngoy, who they had pulled off of the woman. She was taken to a hospital.

According to the court documents, the woman told police that Ngoy ignored her pleas to go away.

Ngoy claimed in his statement to police that he knew the victim, but couldn't remember her name and said the encounter was consensual.

Ngoy, who listed his last address as a homeless shelter, remained in custody on $180,000 bail. His initial court appearance is scheduled for Oct. 25. Court records show he had not requested a public defender as of Monday.

SEPTA issued a statement calling it a "horrendous criminal act" and urged anyone witnessing such a thing to report it to authorities by calling 911, pressing an emergency button on every train car or using the authorities emergency safety app.

"There were other people on the train who witnessed this horrific act, and it may have been stopped sooner if a rider called 911," the authority said.

Watch Now: Popular videos from the past week you may have missed

Astronauts simulated 'life on Mars' in a crater in Israel, watch a police dog come home after being shot in Tennessee, and more popular videos from the past week you may have missed.

In the Israeli desert, astronauts simulate "life on Mars"

Equipped with space suits, astronauts advance with heavy steps towards a Martian station erected in a crater in Israel.

A K9 returns home from the animal hospital after being shot on duty in Chattanooga, Tennessee. Video credit: Animal Emergency & Specialty …

Seeking to please his wife who had wished for a more diversified view from their family house, a Bosnian self-thought innovator has built a ro…

The local government of La Palma released video on Tuesday of dogs trapped by lava from the Cumbre Vieja volcano. Drones were deployed to send…

Actor William Shatner of the famed "Star Trek" TV series blasted off on a speedy trip to space, a guest of Trekkie Jeff Bezos and his Blue Ori…

Aerial video shows the remaining cooling towers at a power station in northern England being blown up in a controlled implosion on Sunday. Vid…

All 3 men charged in Arbery's death convicted of murder

All three white men charged in the death of Ahmaud Arbery were convicted of murder Wednesday in the fatal shooting that became part of a larger national reckoning on racial injustice.

More than 50 now dead in coal mine blast; plus other top news today

Finding other survivors is highly unlikely, officials said. In the U.S., weather may make post-Thanksgiving travel tricky, and hundreds of FedEx shipments have been found dumped in a ravine.

New COVID-19 variant spreads in Africa: What you need to know

It's unclear where the new variant actually arose, but a slew of nations moved to restrict travel from Africa. Here's what you need to know, plus more updates and the latest data on infections and vaccination.

The police chief in Waukesha, Wisconsin, says there were "some fatalities" when an SUV sped into a Christmas parade.

Police were drawing up five charges of intentional homicide against the man suspected of plowing his SUV into a Christmas parade in suburban Milwaukee.

Things to know today: 5 dead, 40-plus injured after SUV plows into Christmas parade; Rittenhouse says he's "not a racist person"; NFL recap. Get caught up.

Update: SUV driver in Christmas parade crash may have been fleeing a crime

Investigators are looking into whether the SUV driver who plowed through a parade in Wisconsin, killing at least five and injuring more than 40, was fleeing a crime.

The White House says it has ordered 50 million barrels of oil released from the strategic reserve to bring down energy costs.

Jury awards millions in damages for Unite the Right violence

In a mixed verdict, a jury awarded more than $25 million in damages Tuesday against white nationalist leaders for violence that erupted during the 2017 Unite the Right rally.

Lawyer: Brian Laundrie fatally shot himself in the head

An attorney for the family of Brian Laundrie said Tuesday that he fatally shot himself in the head. 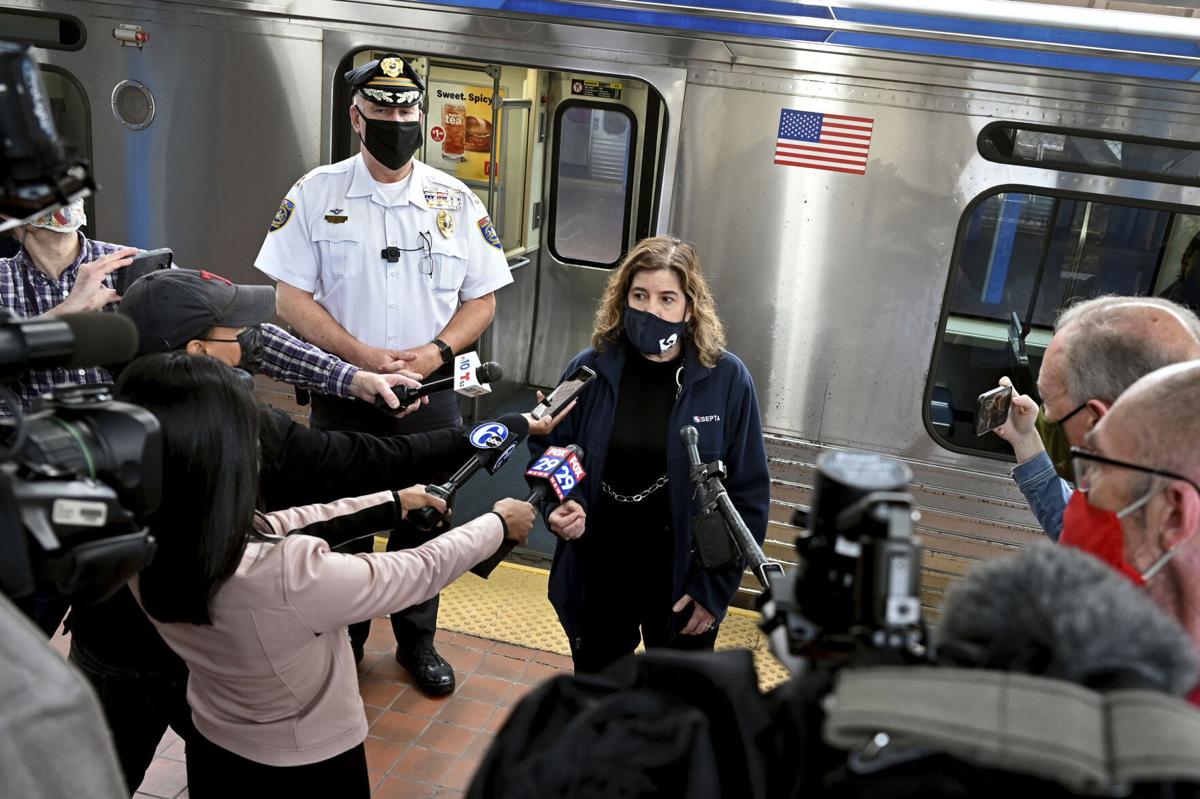 SEPTA General Manager Leslie Richards speaks during a Monday news conference as SEPTA Transit Police Chief Thomas Nestel III stands behind her on an El platform at the 69th Street Transportation Center in Philadelphia, following a brutal rape on the El, as other riders watched, over the weekend. 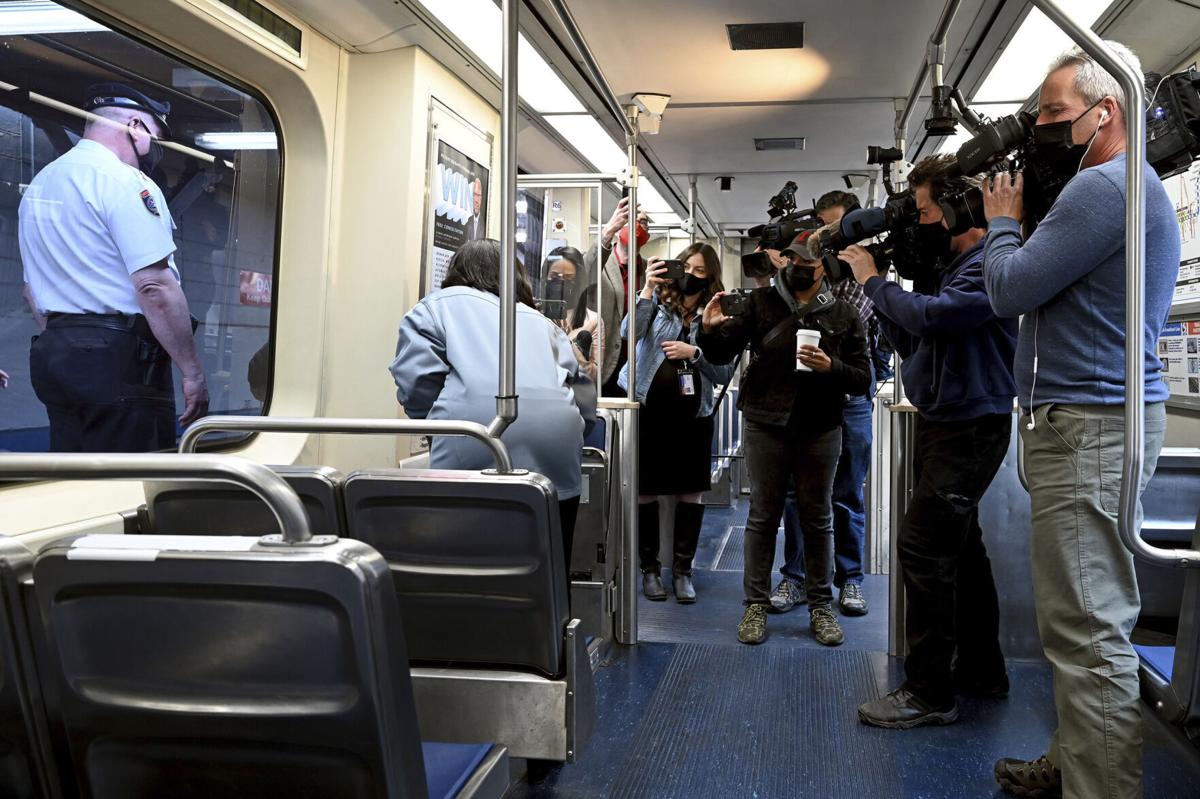 SEPTA Transit Police Chief Thomas Nestel III, seen through window at left, stands by following a news conference on an El platform at the 69th Street Transportation Center Monday in Philadelphia, following a brutal rape on the El over the weekend. SEPTA subway elevated Chief Officer Chrystalle Hooper, center, demonstrates the emergency call boxes on SEPTA trains and how to properly contact police from their cars.