As images and social media posts of Wednesday's insurrection at the US Capitol circulate online, some of those who were present are being identified, and some have lost or left their jobs because of it.

Navistar, a direct marketing company in Maryland, announced that an employee had been terminated after he was photographed wearing his company ID badge inside the breached Capitol building.

"While we support all employees' right to peaceful, lawful exercise of free speech, any employee demonstrating dangerous conduct that endangers the health and safety of others will no longer have an employment opportunity with Navistar Direct Marketing," the company said in a statement provided to CNN.

A Texas attorney named Paul Davis is no longer employed at his company, Goosehead Insurance, after social media posts appeared to show him talking about his participation in Wednesday's events. In one video, Davis says, "we're all trying to get into the Capitol to stop this."

In further posts on Facebook's Stories feature, Davis said he was "peacefully demonstrating" the whole time, and was not trying to actively break into the Capitol. "I said 'trying to get into the Capitol,' meaning to voice a protest. Not in any violent way," he wrote.

On Thursday, a Twitter account belonging to the Westlake, Texas-based company tweeted: "Paul Davis, Associate General Counsel, is no longer employed by Goosehead."

CNN reached out to Goosehead for further comment and was directed to a voicemail message that stated, "The Goosehead employee involved at the Capitol is no longer employed."

It isn't clear whether Davis left the company or was terminated. CNN reached out to Davis for comment but hasn't gotten a response.

Rick Saccone, a former Pennsylvania state representative, shared images on his Facebook page of himself outside the Capitol. Saint Vincent College, where Saccone served as an adjunct professor, immediately began an investigation, according to Michael Hustava, the institution's Senior Director of Marketing and Communications.

"As a result of that investigation, Dr. Saccone has submitted and we have accepted his letter of resignation, effective immediately. He will no longer be associated with Saint Vincent College in any capacity," Hustava said in a statement provided to CNN.

"I decided to resign for the betterment of the school," Saccone told the Tribune-Review, a news outlet in Western Pennsylvania, about his departure. "I've been there 21 years. I didn't want all this terrible media kerfuffle to tarnish the school. I decided it would be better if I just resigned."

Saccone, who posted videos from among the crowd on the grounds outside the Capitol building, stated in a Facebook post that everyone around him was "involved in peaceful, first amendment assembly."

CNN has reached out to Saccone for further comment.

Lindsey Williams, a Pennsylvania state Senator, shared a video that appeared to have been deleted from Saccone's Facebook page. In it, Saccone says, "They broke down the gates, they're macing them up there. We're trying to run out all of the evil people in there and all of the RINOs that have betrayed our President. We're going to run them out of their offices."

Americans in positions of power are also being disciplined for their support of the violence, even if they weren't at the Capitol. The Texas Republican Party removed Walter West, its Sergeant-At-Arms, from his position after West made comments on Facebook supporting the Capitol siege.

"Whereas we vigorously support the First Amendment right to freely assemble, we condemn violence and pray for all gathering in our nation's capital and those at the Capitol Building," a statement on the Texas GOP's website reads. "The Texas GOP has always been on the side of law and order and will remain so."

In a statement, West said his Facebook posts were "misinterpreted" and he would never "advocate for violence on 'The People's House.'"

West's name and photograph do not appear on the Texas GOP's list of leadership.

The Federal Bureau of Investigation's Washington Field Office is seeking the public's assistance in identifying individuals suspected of making unlawful entry into the U.S. Capitol building on Wednesday.

Anyone with information regarding these individuals, or anyone who witnessed any unlawful violent actions at the Capitol or near the area, is asked to contact the FBI's Toll-Free Tipline at 1-800-CALL-FBI (1-800-225-5324) to verbally report tips. You may also submit any information, photos, or videos that could be relevant online at fbi.gov/USCapitol. You may also contact your local FBI office or the nearest American Embassy or Consulate.

Photos from a violent day in Washington

Donald Trump was impeached for a second time Wednesday, just a week after he encouraged loyalists to “fight like hell” against election results and then a mob of supporters stormed the U.S. Capitol. The House voted 232-197, with 10 Republicans joining Democrats to rebuke the president.

President-elect Joe Biden is unveiling a $1.9 trillion "American Rescue Plan" Thursday to turn the tide on the pandemic, speeding up the vaccine rollout and providing financial assistance.

President Trump spoke to the media for the first time since Wednesday's riot, criticizing impeachment and calling for "no violence." Get today's latest.

Anyone flying to the U.S. will soon need to show proof of a negative test for COVID-19, health officials announced Tuesday. Here's the latest virus news.

GOP congresswoman to introduce articles of impeachment against Biden

U.S. Rep. Marjorie Taylor Greene, R-Georgia, told Newsmax on Wednesday that she plans to introduce a measure to impeach Biden on his first full day in office next week.

Nearly a week after the riot, officials are combing through evidence to seek out those behind the brazen attack on the U.S. Capitol. Get all the latest updates here.

How and when will you get vaccinated? How do these vaccines even work? Here are answers to some of the most common COVID-19 vaccine concerns and the latest information on the virus' spread.

When will Americans see the aid from Biden's relief proposal? It's up to Congress

There's a lot that has to happen before Biden's plan — which is chock-full of measures long favored by Democrats — becomes law. Here's a closer look. 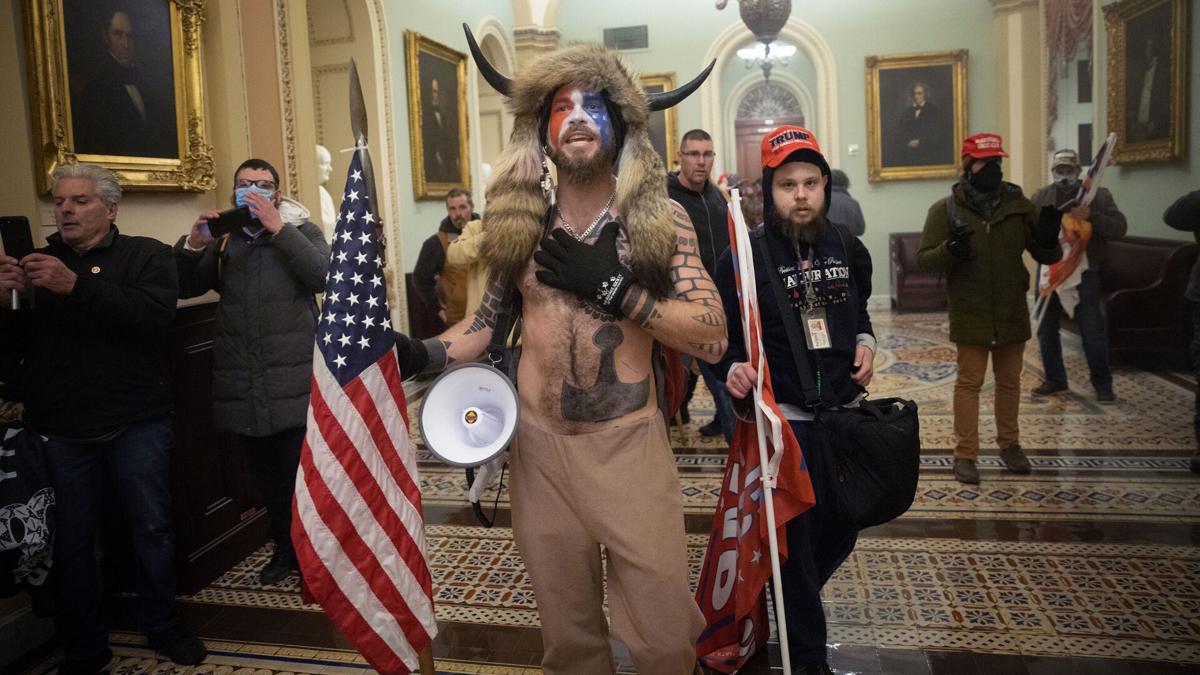 An unidentified Navistar employee, right center, is seen wearing a company badge during the Capitol breach on January 6. Navistar has announced his termination.

Republican Rick Saccone, center, is makes his way through a gang of cameras and reporters as he heads to the polling place to cast his ballot on March 13, 2018 in McKeesport, Pa.