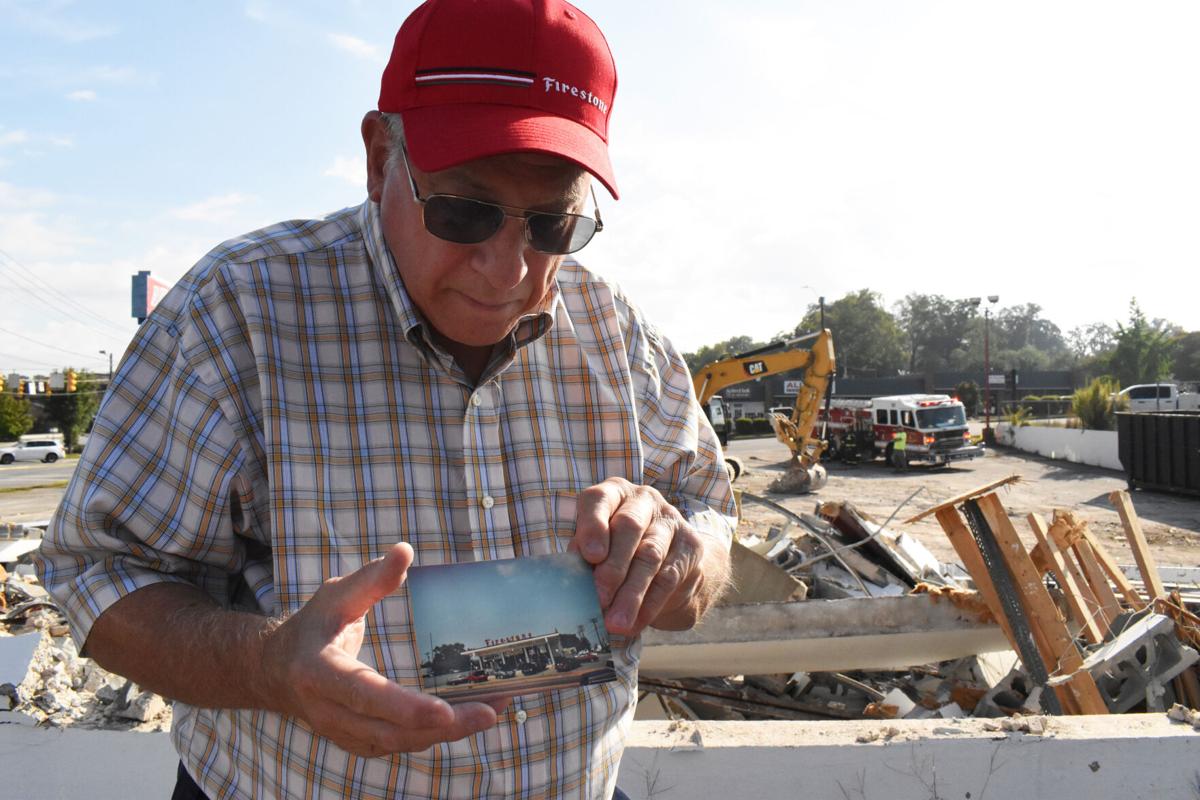 Don Nackley holds a picture of his Firestone store while standing in front of the rubble that was once home to his business. The building was demolished to make way for road improvements. 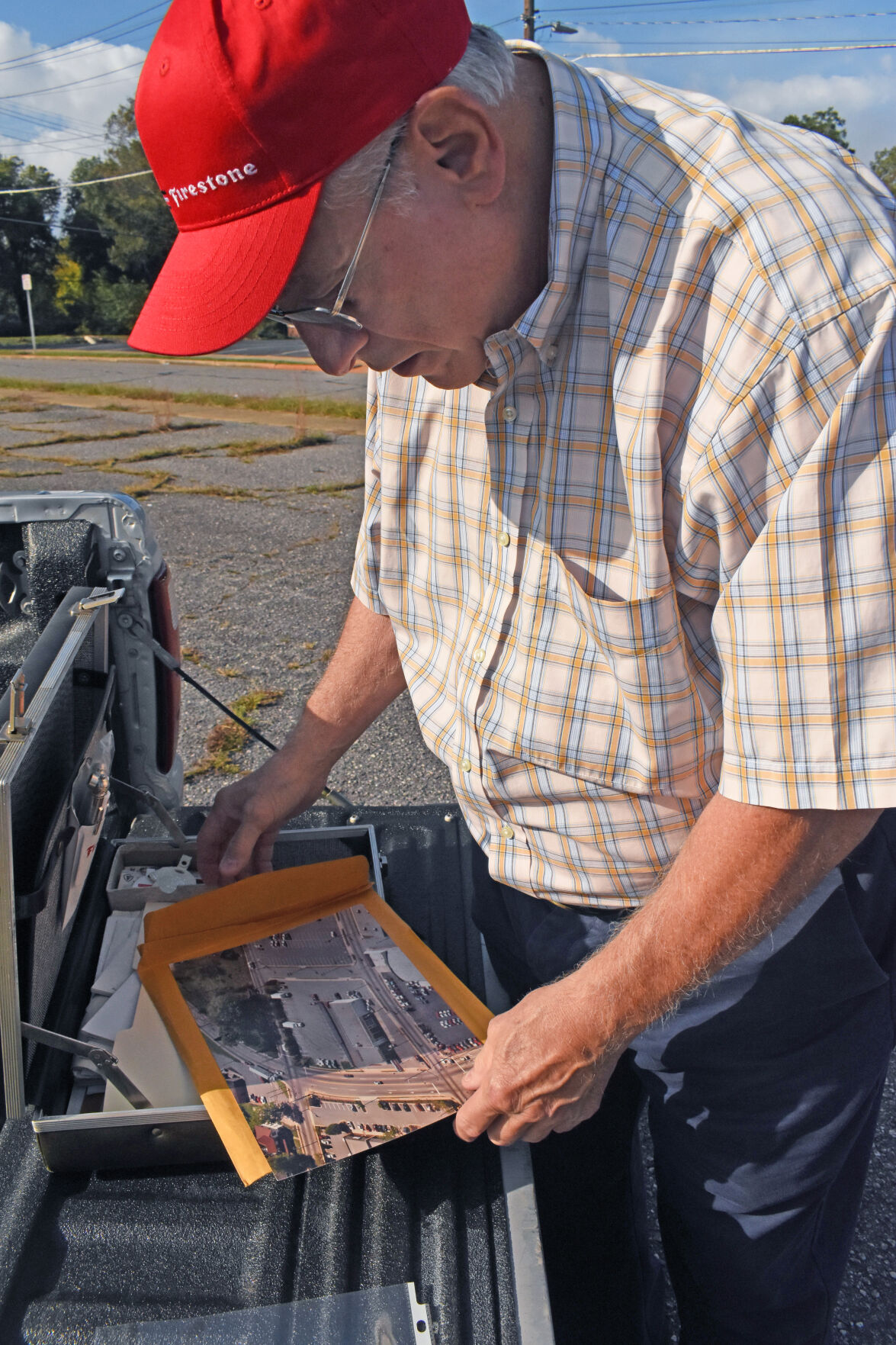 Don Nackley pulls an aerial shot of his Firestone store from a briefcase of memorabilia of his time as a Firestone salesman and store owner. 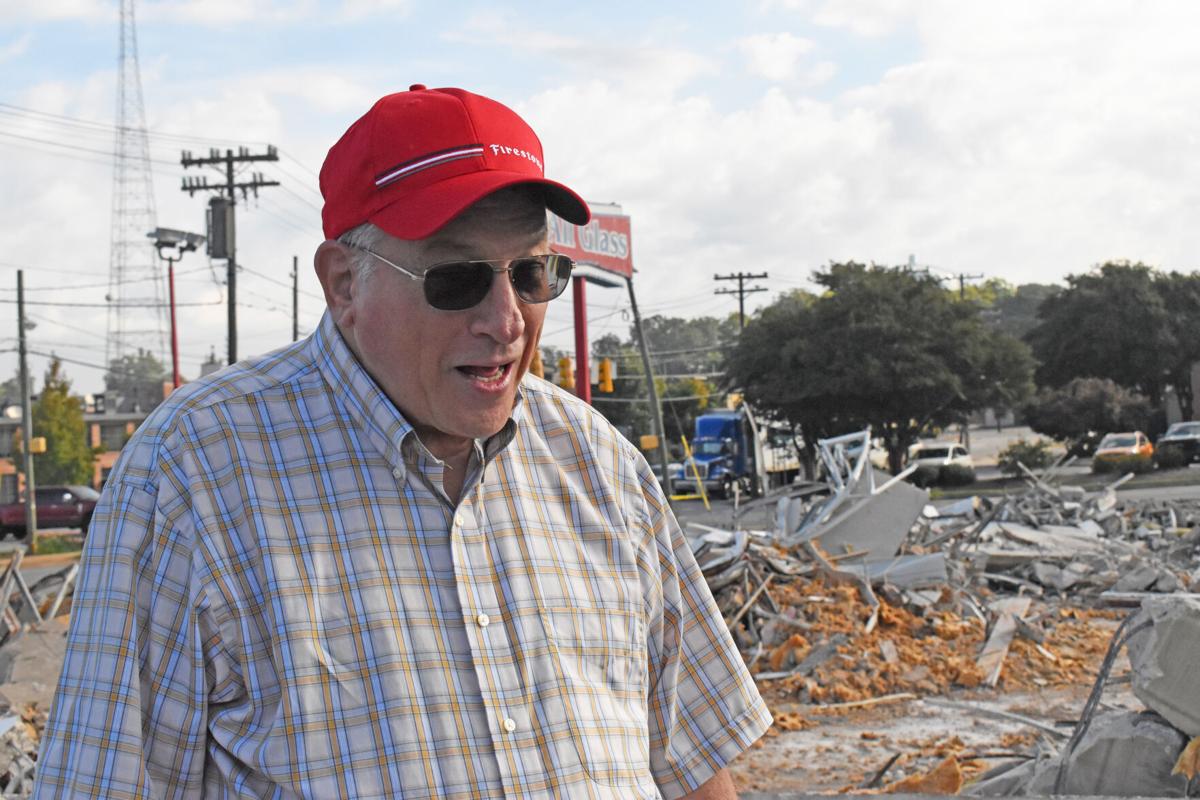 Don Nackley reminisces about his Firestone store. Behind him are the remains of the building that housed his business years ago. The building was later home to the All Glass company.

He owned the business, at the corner of N.C. 127 and First Avenue SE, for nearly two decades in the 1980s and 1990s. During that time, Nackley said he tried to help his customers with any problem they had, and they appreciated it. He still has copies of complimentary letters sent to Firestone from his customers.

Looking over the letters on Wednesday with a bright red Firestone hat on his head, a tear came to his eye and his voice cracked.

“I take pride in it — too much sometimes,” Nackley said. “I was privileged to serve the public. I really thought it was a privilege. And I always tried to listen to people.”

Nackley shuffled through the letters, excellence awards and other memorabilia from his time with Firestone in the parking lot next to his former business. Behind him, construction workers tore down the building once home to Don’s Firestone. A pile of white concrete and bent metal remained on Wednesday.

The building is a casualty in the N.C. Department of Transportation’s plans to rework and improve the intersections of N.C. 127 and First Avenue SE and Second Avenue SE.

Seeing the building go was sad but stirred sweet memories for Nackley.

“It is sort of sad but I guess I’m a sentimental old fool anyway,” he said. “It just means that I had good feelings for the place.”

Nackley started working for Firestone Tire and Rubber Company in 1966. He said he was about 25 years old.

He ran stores in Miami, Charlotte and Asheville before the store in Hickory went up for sale in 1982. He took the opportunity to work for himself as a franchise owner.

In his years owning the store, from 1982 to 1999, Nackley helped customers in times they needed help most, he said. When their car needed care, they came to him and trusted him to help.

“I tried to please people,” Nackley said. “That was one thing that made me feel good about it. When people come in they’ve got a problem, and they come to you because they trust you and you can solve their problem.”

Nackley said he took pride in his work and built a bond with the community. His memories of the business are plentiful, but the ones that stand out are instances of connection.

One memory holds a special place in Nackley’s heart. During his years running the shop, a group of children used to come in from down the block, he said. They brought pennies to him to buy soda. He said he didn’t mind if they were ever a few pennies short, he just enjoyed the company.

Years later, a woman who was about 19 years old stopped Nackley on the street.

“She said, ‘Do you remember me?’ I said I didn’t, and she said she was one of the girls who would bring pennies for soda,” Nackley said. “I said, ‘Lord have mercy.’ It was touching. It all goes back to service. It’s how you treat people, the people respond back to you. I got a lot of good blessings from running this store.”

After Nackley left the store behind in 1999 to spend more time with his family, the building remained a Firestone store until All Glass moved in, Nackley said.

When Nackley found out the building would be torn down, he decided to get a piece of the building to remember it by.

After demolition started, he stopped and picked up a few pieces of the rubble to remember the time of Don’s Firestone.

Don Nackley holds a picture of his Firestone store while standing in front of the rubble that was once home to his business. The building was demolished to make way for road improvements.

Don Nackley pulls an aerial shot of his Firestone store from a briefcase of memorabilia of his time as a Firestone salesman and store owner.

Don Nackley reminisces about his Firestone store. Behind him are the remains of the building that housed his business years ago. The building was later home to the All Glass company.