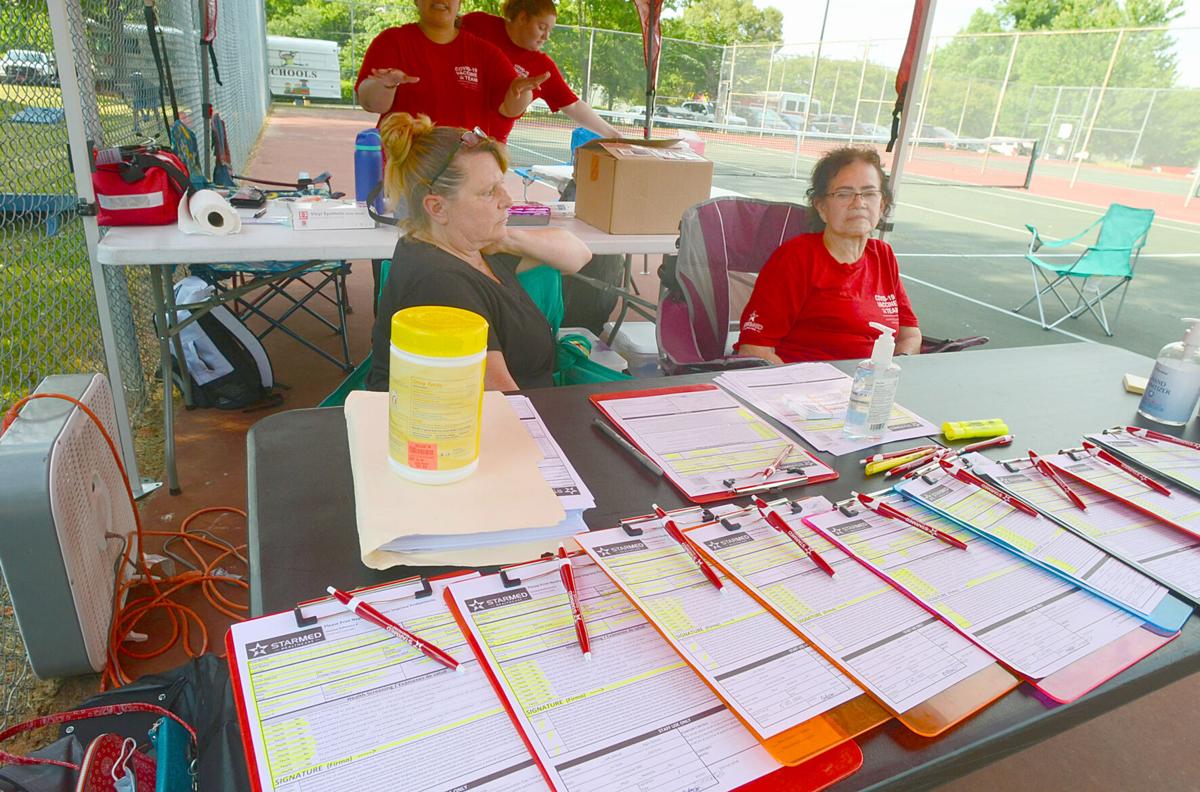 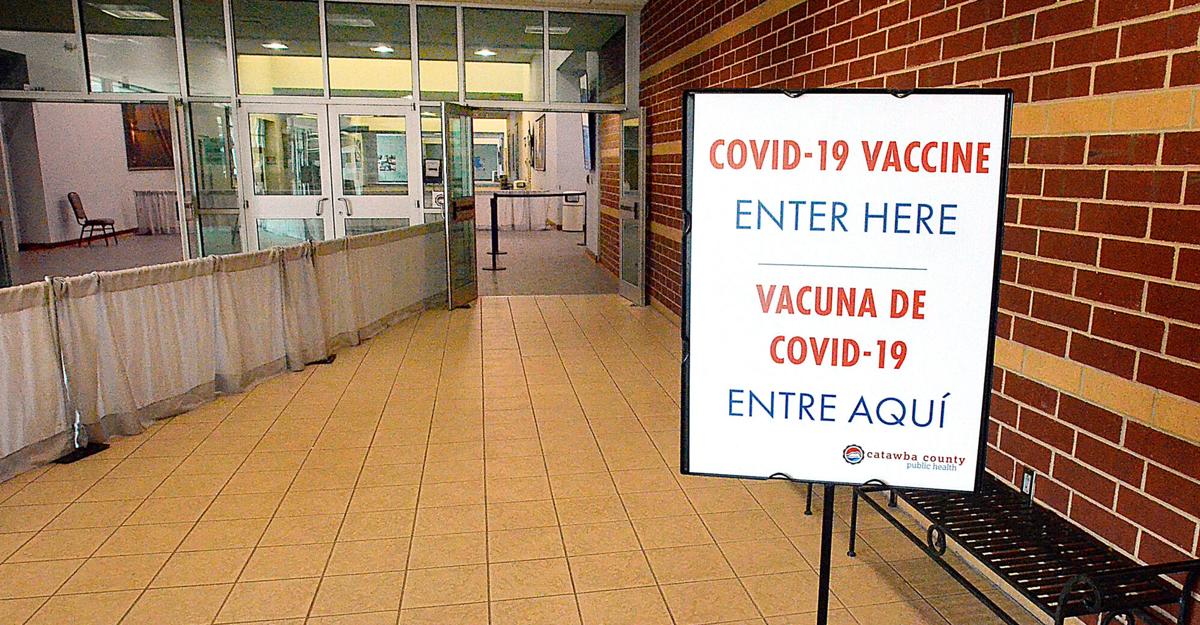 With COVID-19 vaccine demand down, a once busy vaccination site in Catawba County is seeing fewer patients.

Hickory Daily Record reporter Virginia Annable worked with colleagues at newspapers owned by Lee Enterprises across the state of North Carolina to compile data and examine vaccination trends for the state.

The same trends ring true locally, among Catawba, Burke, Caldwell and Alexander counties, where vaccination rates have yet to reach 40%.

Statewide, county COVID-19 vaccination rates range from about 20% to 60% of the population. In recent weeks, however, the numbers have hit a turning point. Though supply has increased enough to vaccinate anyone who wants it, the demand has dropped.

If immunization rates don’t go up quickly, another wave of COVID-19 cases will come, said Julie Swann, head of the Department of Industrial and Systems Engineering at North Carolina State University.

“We believe the population of North Carolina is still at risk for a lot of deaths,” Swann said. “If people continue to wear masks, then that risk can be postponed, but ultimately everyone will need some kind of protection against the virus, and the safest is the vaccine.”

With that in mind, the mission of public health leaders is to find which populations aren’t getting vaccinated and figure out how to get the vaccine in their arms, she said.

“I think there are different reasons that people are not yet vaccinated, and if we understand what those reasons are then that may suggest different types of intervention,” she said.

Median income, levels of secondary education and internet access in North Carolina have the strongest correlation with vaccination rates, according to an analysis of data from the U.S. Census Bureau and the N.C. Department of Health and Human Services.

There are also parallels between vaccination rates and population density, political leanings and disabled populations. Some of those correlations are reflected nationwide, said Dr. Chris Beyrer, a public health and human rights professor at Johns Hopkins Bloomberg School of Public Health.

In North Carolina counties, the strongest link is between the percent of residents at least partially vaccinated and the percent of those with a bachelor’s degree or beyond, according to data analysis.

While there are outliers in the data, the trend is clear. In Orange County, the county with the highest vaccination rate, 63% of its population is vaccinated and 60% of the county’s population has a degree. In Onslow County, 20% of people are at least partially vaccinated, and 22% hold a degree.

The median income of North Carolina counties also aligns with vaccination rates. Counties with higher median incomes tending to have a higher percentage of the population vaccinated.

There is a moderate correlation between North Carolina counties’ population density — people per square mile — and the percent of people vaccinated. Areas with lower density — more rural areas — tend to have lower vaccination rates.

North Carolina counties with higher percentages of disabled people have lower vaccination rates as well, according to U.S. Census data.

In three of the top four counties for vaccination, the percent of the population that is disabled is under 10%. In the bottom three counties, 16-18% of the county populations are disabled.

The political divide in vaccination is evident in North Carolina, but the correlation is not strong overall. Generally, there is a slight correlation showing counties that voted in larger percentages for former President Donald Trump in the 2020 election have lower vaccination rates, while the more people who voted for President Joe Biden in November, the larger percentage of people are vaccinated in a county, according to NCDHHS and N.C. State Board of Election data.

Where there aren’t strong connections to county vaccination rates is the racial and age makeup of counties. That could be because counties and the state health department put a strong emphasis on vaccinating elderly people and minority communities early on, Swann said.

“I think what has happened is that when organizations are really, truly focused on uptake of vaccine in populations that are African American, Hispanic, Native American, it works,” she said. “They are going to specific locations making it easy to get past the language barriers, enlisting trusted practitioners who have time to talk through concerns. We’re finding that there is less resistance when the appropriate time is spent on it and the vaccine is easy enough for people to get.”

How trends can help

Using these specific indicators amid North Carolina counties can lead to new efforts for COVID-19 vaccinations.

“We’re absolutely at the point where there have been and need to be shifts in how the vaccine is delivered and administered,” Swann said. “The people who most wanted it, got it. Now we have to get it to the people who are not quite as keen or able to get it.”

The correlation between education levels and vaccination could be rooted in scientific literacy, Beyrer said. People who hold higher degrees may be more comfortable with the science behind the vaccines and might be able to research the vaccine on their own. They might also more easily recognize misinformation online, a concern among vaccine experts, Beyrer said.

That suggests a need for better messaging and spread of factual information about the vaccine, Beyrer said.

“Obviously, it’s very important for the government to be factual and evidence-based, and political leaders not to politicize the science,” Beyrer said. “What we’ve also seen at the local level and community level is people really want to hear from trusted voices.”

Getting community leaders like pastors and faith-based leaders to promote vaccinations and spread factual information can help, he said. Encouraging primary care providers to endorse the vaccine and help their patients understand the vaccine could help as well, he said.

“All these types of things make it easier to get the vaccine,” Swann said. “Can a meatpacking worker take the hour off to get the vaccine? Can they take the day off if they feel bad afterward? Workers who don’t have any vacation or sick leave, they lose money if they take off, and they need that income.”

In areas with lower income, working with employers to offer vaccinations on site could eliminate the barrier of taking time off work to do it, Swann said. Getting the vaccine in low-income health clinics also is a good route, Beyrer said.

Lower vaccination rates in more rural areas could be related to access, Swann said. Sometimes, a 30-minute to one-hour drive is prohibitive for some to make, especially for disabled people, a population more prominent in rural areas. That’s why mobile vaccine clinics and increased vaccination availability at pharmacies and doctors’ offices is a crucial next step, Beyrer said. The vaccine has to be brought to the people.

Another aspect could be a feeling that there’s not much risk from COVID-19 in rural areas, Swann said.

“At least some of this is perception of risk of the disease,” Swann said. “In rural areas, you’re a little less likely to have that (initial) communitywide occurrence of the disease, so you might not think there’s as much risk, and you don’t think you need the vaccine.”

Proper messaging about the severity of the disease could help sway rural populations.

“People who are conservative have been less involved with the vaccine than people who are liberal,” Brewer said. “This seems to look back to the fall elections when COVID became a hot-button issue. It became one of the topics of discussion, and it seems to have politicized the pandemic and vaccines.”

Conservative white men and evangelical Christians are less likely to get the vaccine, Beyrer said. Messages from conservative leaders to encourage those populations to get vaccinated and let them know it’s safe would be helpful, Brewer said.

“I think leaders from the party have to more meaningfully engage,” he said. “We’re still stuck in this weird partisan divide.”

The same tactics used to target Black and Hispanic populations could be used to target white conservative men and evangelical Christians, Brewer said. Public health departments need to find out what might work — like vaccinations at churches and other community centers.

If more people don’t get vaccinated and if mask use and social distancing continue to decrease, Swann expects another wave of COVID-19 to hit.

Swann says the variants of COVID-19 that already exist are a significant threat. They are more transmissible, and while the vaccine gives some protections against them, there is still opportunity for spread.

If more people do not get vaccinated, the virus will be able to continue to spread and transform into new strains that the vaccines may be less effective against.

While cases are low now and appear stable, Swann is certain another wave is coming.

“It’s going to happen as more and more people remove their mask,” she said. “The only question is whether it’ll come in a concentrated form or spread out over a longer time period.”

Wes Young with the Winston-Salem Journal contributed to this story.

Sunisa Lee's father after gold: 'Is this real?'

Sunisa Lee's father after gold: 'Is this real?'

With COVID-19 vaccine demand down, a once busy vaccination site in Catawba County is seeing fewer patients.