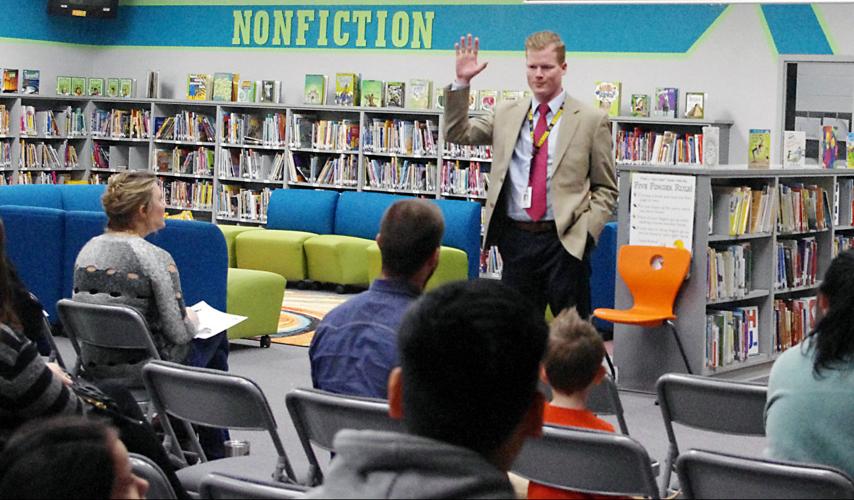 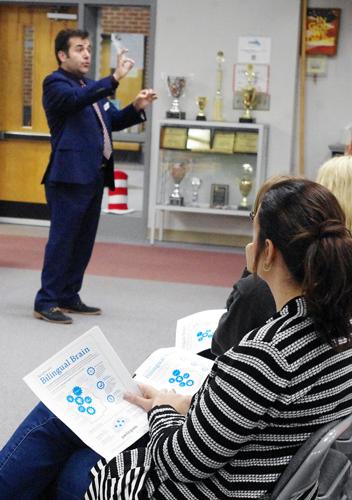 SHERRILLS FORD — On Monday, Catawba County Schools got a chance to make its system look a little more competitive to potential kindergarten parents with the launch of the system’s first dual-language English/Spanish immersion program.

It will be offered at Sherrills Ford and St. Stephens elementary schools.

Sherrills Ford Elementary Principal Lathan Fowler said he had parents showing an interest in the new program even before the school held its informational meeting last week.

“It definitely makes us more competitive,” Fowler said. “It offers a different opportunity for kids, and it’s something not too many schools in the area are offering. It just gives parents an option to choose a different pathway for their students.”

All three school districts in Catawba County have seen a drop in enrollment in the last three years.

Scott Farmer’s son, Hayden, wouldn’t normally attend Sherrills Ford, but the family attended the informational meeting to see if it was worth putting in a transfer request because of the dual-language program.

“I just didn’t know if there would be a struggle for them starting at kindergarten and moving through with a second language,” Farmer said.

The addition of St. Stephens and Sherrills Ford will increase the number of public schools in the county offering a dual-language immersion program to four.

Both of the CCS schools will utilize their current teacher allotments to pay for their dual-language teachers, with the district fully dedicated to keeping the program rolling all the way to sixth grade for students at both schools.

The difference was based on the difference in the demographics of the two schools, with St. Stephens having a larger Spanish-speaking student population already.

This system goes beyond just a language class. In an immersion program, Spanish is not taught as a subject but instead it is the language used to deliver instruction for other subjects.

At Sherrills Ford, specialty classes like art, math and music will still be taught in English.

The district is hiring teachers for the dual-language program through the company Participate, which manages a cultural exchange teacher program.

He said the dual-language teachers will teach what every student in North Carolina is required to learn by the state’s Department of Public Instruction. It will just be in Spanish.

“It’s not just about being able to speak another language though, it’s being able to be bi-literate, bilingual and multicultural,” Saenz said.

A common concern for several parents was how do they make sure their child’s English skills don’t fall behind while they are immersed in Spanish.

Saenz told the group this needed to be as much a commitment from the parents as the student, and he suggests parents make time every day to read to their children in English as well as work with them on homework.

“He already knows some Spanish words and for his future, in a job, with the way things are evolving, I think it’ll be beneficial in the long run just to see where it can take him,” Hayden’s mother, Ashley McCoy, said.

Alejandro and Jesika Tellez saw the dual-language program as a way to provide their daughter, Arianna, with a chance to advance the Spanish-speaking skills she’s already learning at home. Her father is fluent, and realizes there is a real benefit in his daughter having stronger bilingual skills.

“As we see more Hispanic culture coming into the United States, I think it’s just going to give her that little edge that other students are not getting,” Alejandro Tellez said.

They live in the area zoned for Tuttle Elementary students but like the Fords, the dual-language program would make it worth registering their daughter at Sherrills Ford instead.

“It’s a big decision to make for a kindergartner, but it’s a decision that could pay off where the student is bilingual, bi-literate by the time they leave this school,” Fowler said. “That’s something that’s very competitive everywhere.”

HICKORY — The bottom line for any business is making a profit, but Lenoir-Rhyne University students in Ralph Griffith’s entrepreneurship capst…

SHERRILLS FORD  — Robots, music and students – at Sherrills Ford Elementary School this is a typical formula for learning in Jeremy Whitener’s…

PHOTOS: Education at a glance in Catawba County, Feb. 26

The following gallery is a look at different educational activities throughout Catawba County the Hickory Daily Record recently covered.

Along with elementary schools across the country last week, Banoak Elementary celebrated Read Across America with special guest readers from t…