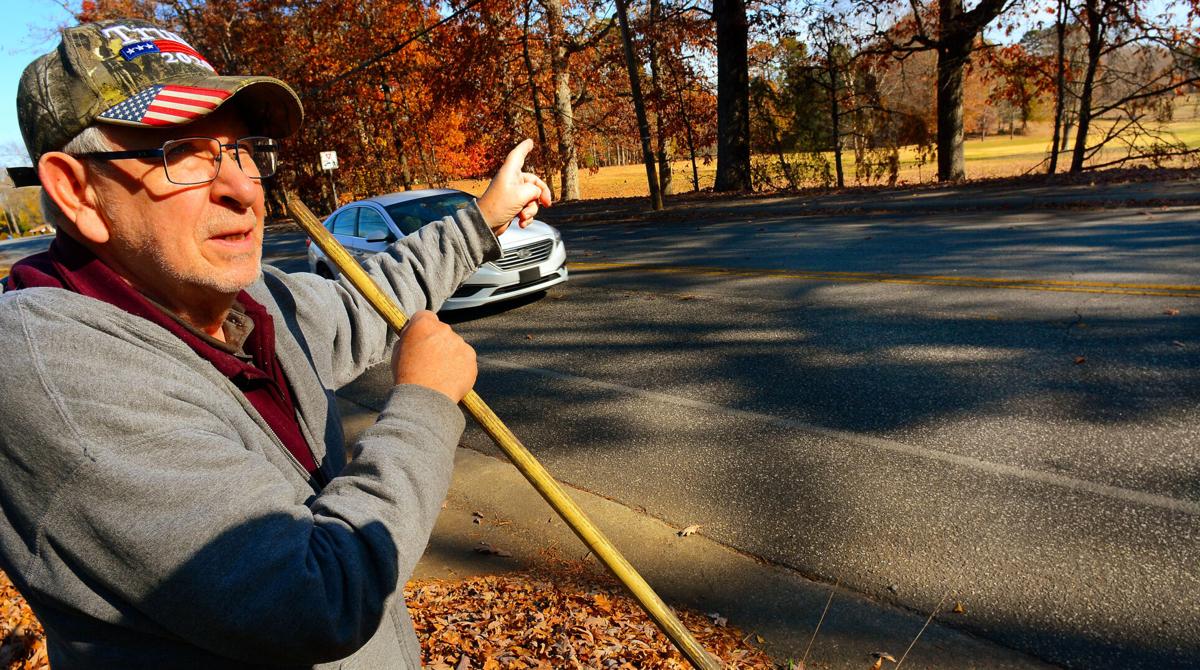 Hickory resident Robert Odell Yount points toward the former Hampton Heights golf course property as he discusses the plans for housing at the location. Yount lives across the street from the proposed development. 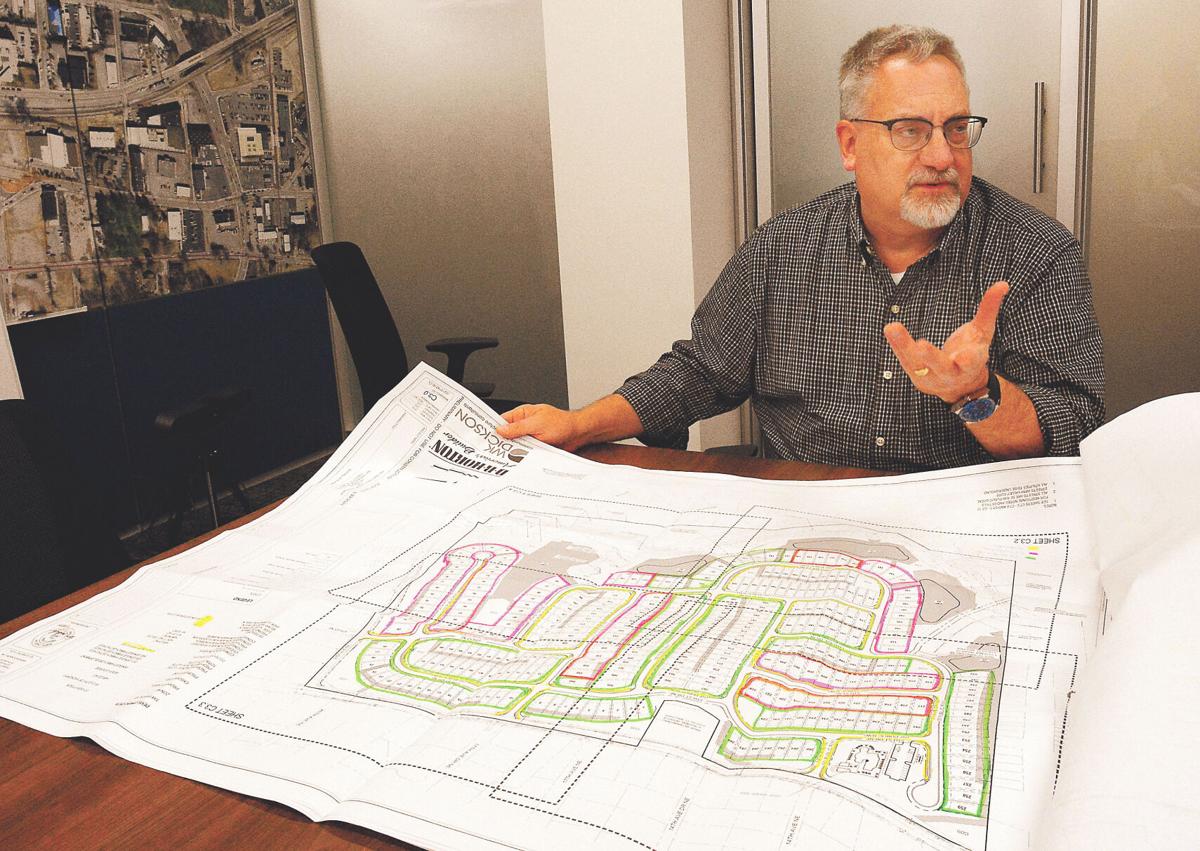 Hickory Planning Director Brian Frazier goes over the details of the plans submitted by D.R. Horton for a 340-unit housing development at the former site of the Hampton Heights golf course. The plans are under staff review. 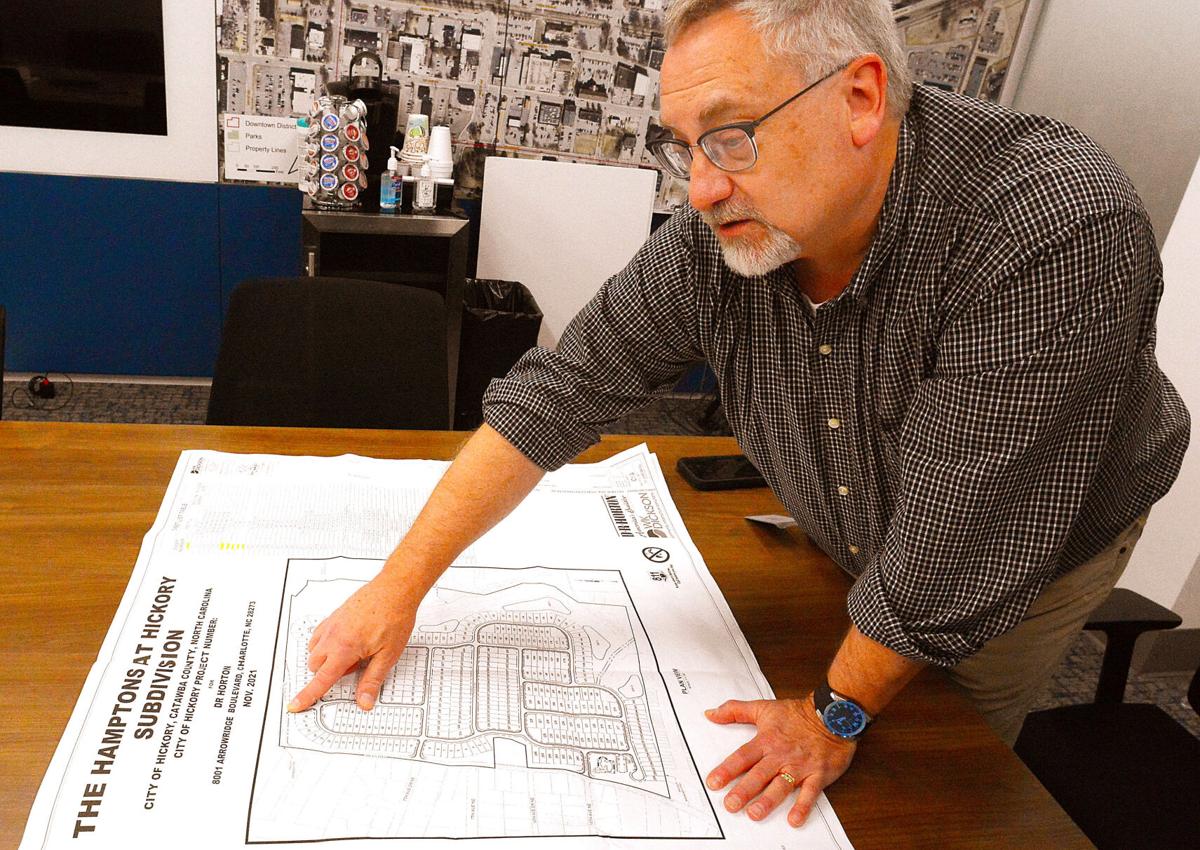 Hickory Planning Director Brian Frazier points to one of the three access points identified in the plans to the proposed Hamptons at Hickory subdivision.

The Hickory course closed in October after the property was sold. Developer D.R. Horton is set to turn the property into a community known as The Hamptons at Hickory.

The company was tipped off to the property by a local real estate broker, according to an email from the company in response to questions about the project. “With the growth in population, job opportunities and housing market of Hickory, we knew this was a new market and location we wanted to be in,” according to the company.

The city of Hickory received the plans on the day before Thanksgiving, and the relevant county and city agencies were in the process of reviewing the plans last week, Hickory Planning Director Brian Frazier said Wednesday.

Since the property is already zoned for medium density residential and the plans comply with the existing zoning, there will be no public hearings on the project.

About 200 of the homes would have lot widths of 41 feet, while the remaining lots would be 51 feet wide. Lot sizes would average around 6,000 square feet, Frazier said.

The company said the development will include a mix of ranch-style and two-story homes with between three and five bedrooms.

Frazier said the developer will be building streets and sidewalks in the development with the expectation of making them public.

He said some parts of the site are not suitable for development and that Horton intends to keep around 37 acres of the property as open space, more than the roughly 30 acres the company is required to keep open.

The company is also planning to add amenities such as a pool, cabana and playground.

Frazier said he heard preliminary discussions that the houses in the subdivision would sell for $300,000 or more. In response to a question about the pricing of homes, the company said that will depend on “market conditions when we have homes available for sale.”

The company expects it will take four or five years to fully build out the community. It is not clear when construction might begin.

The city and county departments have 10 days from the original submission to review plans and provide comments. From there, the company will respond to any comments and then resubmit the plan for additional feedback. Frazier said government agencies will then have five days to give feedback on the resubmitted plans.

“So technically they could start grading or building within three to four weeks,” Frazier said. “That’s not usually the case. A lot of it’s weather dependent and with the economy the way it is, the supply chain crunch, we’ll have to see.”

Robert Odell Yount, 72, who lives across the street from the proposed development, met with Frazier to learn more about the plans. On Thursday, Yount said he liked the plans. He also said there needed to be turning lanes added at Fifth Street and 21st Avenue NE to help promote safe traffic flow in the community.

He said traffic would probably be the major source of questions among the neighbors. “To me, that’s the concern of I think everybody probably has because let’s face it, we all want to live healthy lives and safe lives,” Yount said.

Morgan and Pito Iriarte’s excitement is clear in the tone of their voices.

An 86-year-old man died after being hit by a car on Section House Road near First Street West in Conover on Wednesday.

Masks required for Catawba County Schools; 167 teachers were out on Friday

Masks will be mandatory for students and staff members at Catawba County Schools until Jan. 24. The school board will revisit the mandate at a…

COVID-19 hospitalizations and cases in Catawba County continue to climb.

The Catawba County area saw 4-7 inches of snow Sunday morning. Sleet and some freezing rain is expected to fall until the evening.

Body of 73-year-old found in house that burned Wednesday on Banoak Road; sheriff's office is investigating

A house fire caused by a kerosene heater claimed the life of a 72-year-old man on Wednesday night.

The Catawba Valley area can expect icy roads Tuesday and Wednesday mornings. Later in the week, there is a chance of another winter storm.

Catawba County Schools to again require masks for students, teachers; board of education vote was 4-3

Masks are again mandatory for students and faculty while on the grounds of Catawba County Schools.

A man was injured when he was struck by a vehicle at a Hickory apartment complex on Saturday.

Hickory resident Robert Odell Yount points toward the former Hampton Heights golf course property as he discusses the plans for housing at the location. Yount lives across the street from the proposed development.

Hickory Planning Director Brian Frazier goes over the details of the plans submitted by D.R. Horton for a 340-unit housing development at the former site of the Hampton Heights golf course. The plans are under staff review.

Hickory Planning Director Brian Frazier points to one of the three access points identified in the plans to the proposed Hamptons at Hickory subdivision.