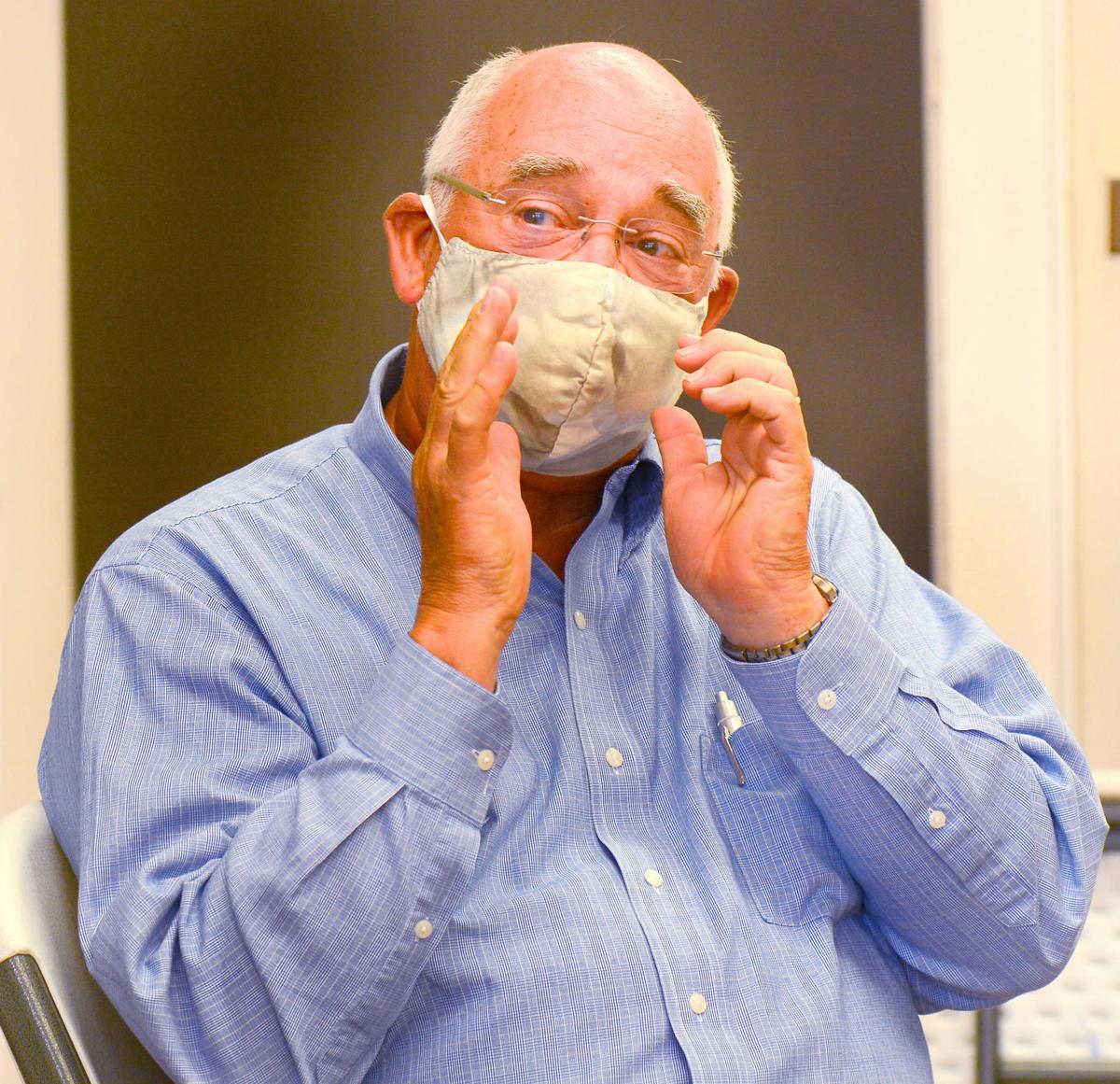 Retired West Hickory Baptist Church Music Director Jim Dellinger discusses how his father made him learn how to play the harmonica as a child. 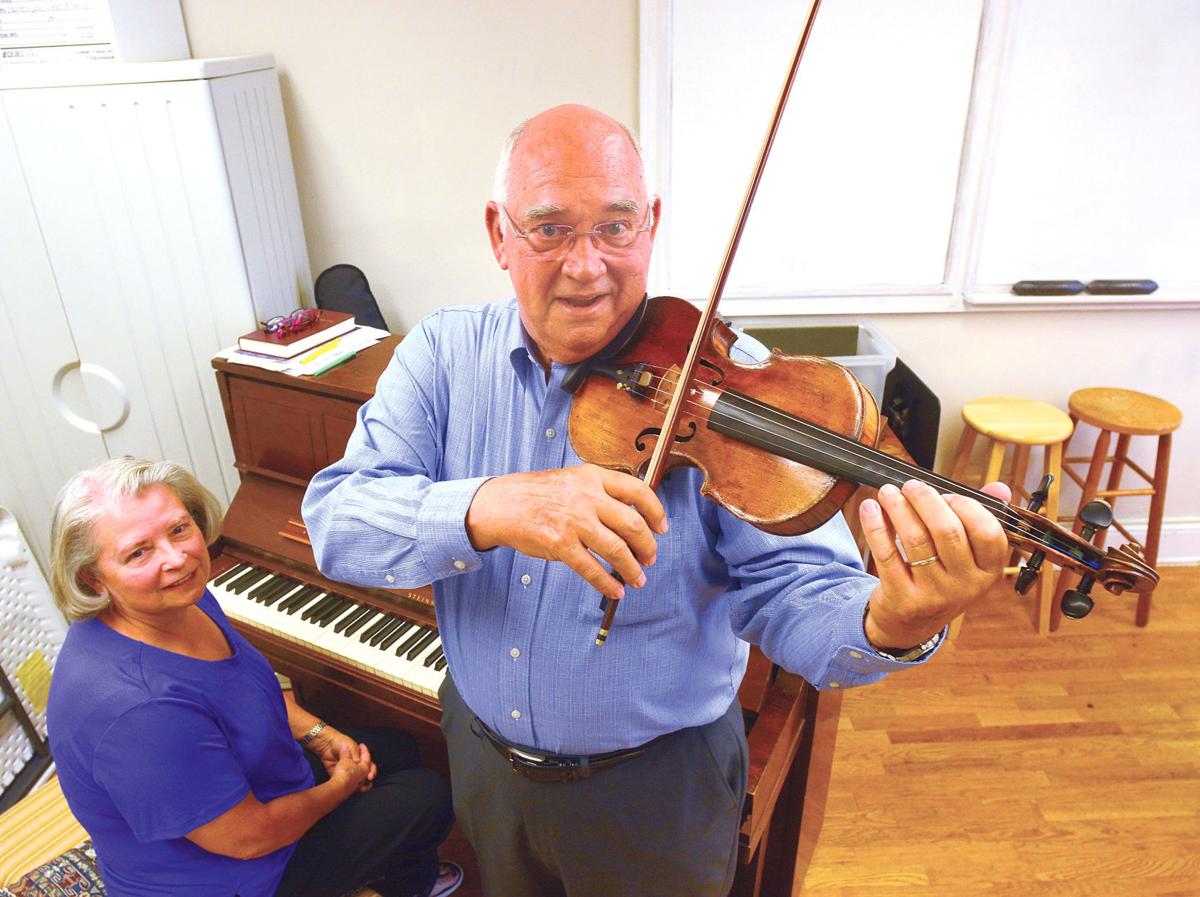 Jim Dellinger, the retired music director at West Hickory Baptist Church,  plays his violin as his wife Elizabeth looks on.

Jim Dellinger retired as the music director of West Hickory Baptist Church on June 21 after 20 years with the church.

It marked the end of Dellinger’s 60 years of working in church music.

In addition to his time at churches, Dellinger’s musical career also included work as a teacher, a violinist and director in various musical groups, including the Hickory High Orchestra.

His interest in both music and teaching developed early.

Dellinger, 82, recalled taking a career assessment when he was young that listed music as the fourth-most-suitable career for him.

The top three career options for Dellinger were dentist, social worker and psychiatrist.

“And all those (would have) made good money except music, which tells you that I was not logical from an early age,” he said.

Dellinger’s wife Elizabeth, who worked along with him as the organist at West Hickory Baptist, said he was “the supreme teacher.”

Dellinger discussed how he came to be the church’s music director, his favorite memory of his time as music director and how his early interest in music developed.

This interview has been edited for length and clarity.

On how he was to became the church’s music director:

I had directed the Carolina Moonlighers for several years. That’s a barbershop group in town, it’s an old group.

And Dale Propst had reached a point in his life where he needed a break, and he’d been the main guy. He asked if I would take it over for a while and I did.

While I was doing that I got to know a lot of the fellows that sang in the group and one of the men’s name was Keith Mull. He was an incredible bass singer and he attended at this church.

And so Keith dropped my name to the committee that was looking for someone.

Then Dale Starnes, who was the chairman of that committee came to me and said, “Jim, I’d like to talk to you about covering for the church. We’ve just started looking for a minister of music and we need someone to kind of hold the fort until we can find that person.”

He said, “It’d probably be about two, three months and we’ll have it covered.”

So I started doing it and that was the end of it. Never heard anything more. That’s what I did for 20 years.

So (Starnes) said, “He fell for it hook, line and sinker,” and I truly did. But I’ve never regretted it.

On his favorite memory of working at the church:

It is the cantatas and I think the last one we did (around Christmas time) might be the most meaningful.

I put out things that were like Vivaldi and Bach and so forth but I found that this church was more what you hear on the radio kind of culture.

I found things that were lyrical, well-arranged and cut across a slice — you got a little of everything in that cantata.

This particular service that we did this past Christmas … the choir was probably the best they’ve ever been.

On his early experiences with music:

My father, his music was country and western and my mother loved all the church music.

When I came along, my interest, which blew my dad’s mind, was classical violin. I just loved it from the moment I ever heard one.

So I asked to join the beginner violin classes at elementary school in the fourth grade.

I did that and I had a reasonable amount of talent so I was able to kind of hold my own and I played some solos from the fourth through seventh grade for the PTAs and things like that.

So I sort of found a niche that I was filling and my dad was absolutely amazed that this was something I kept on doing because he liked his country and western.

He had a car dealership and he actually would go up into the North and pick up cars and come back.

One time he came back from up in Maryland and he had a little harmonica and a how-to book. He says, “Here, if you want to learn to do something that I can appreciate, go back and work on that a little bit.”

I took the challenge, went back in the room there and I learned to play a bunch of little pieces in about maybe an hour, hour-and-a half. I came back and played them for him.

He said, “Hand me that thing.” To that moment I didn’t even know he played anything.

He took that harmonica, got all of my slobber out of it, picked it up and began to play. I mean, it was jazzy, had the vibrato on the side and all this stuff.

He handed it back to me and says, “You’ve got a lot of work to do.”

On what he’s enjoyed the most in his music and teaching career:

My greatest joy is seeing somebody’s eyes light up when they catch onto something.

Sometimes a whole group, when you’re teaching something that they don’t know and suddenly they do get what the concept is.

Suddenly that piece of music, which almost sounds like an exercise, becomes music and you can see that they realize they’re making something that’s better than it was when they first started.

In Catawba County, we have seen a significant increase in the number of laboratory-confirmed COVID-19 cases over the past several weeks. While…

This story was updated with new information at 5:19 p.m. on July 6.

Hickory firefighters responded to an electrical fire at a building in the 900 block of 9th Street Drive NE Thursday morning.

Retired West Hickory Baptist Church Music Director Jim Dellinger discusses how his father made him learn how to play the harmonica as a child.

Jim Dellinger, the retired music director at West Hickory Baptist Church,  plays his violin as his wife Elizabeth looks on.