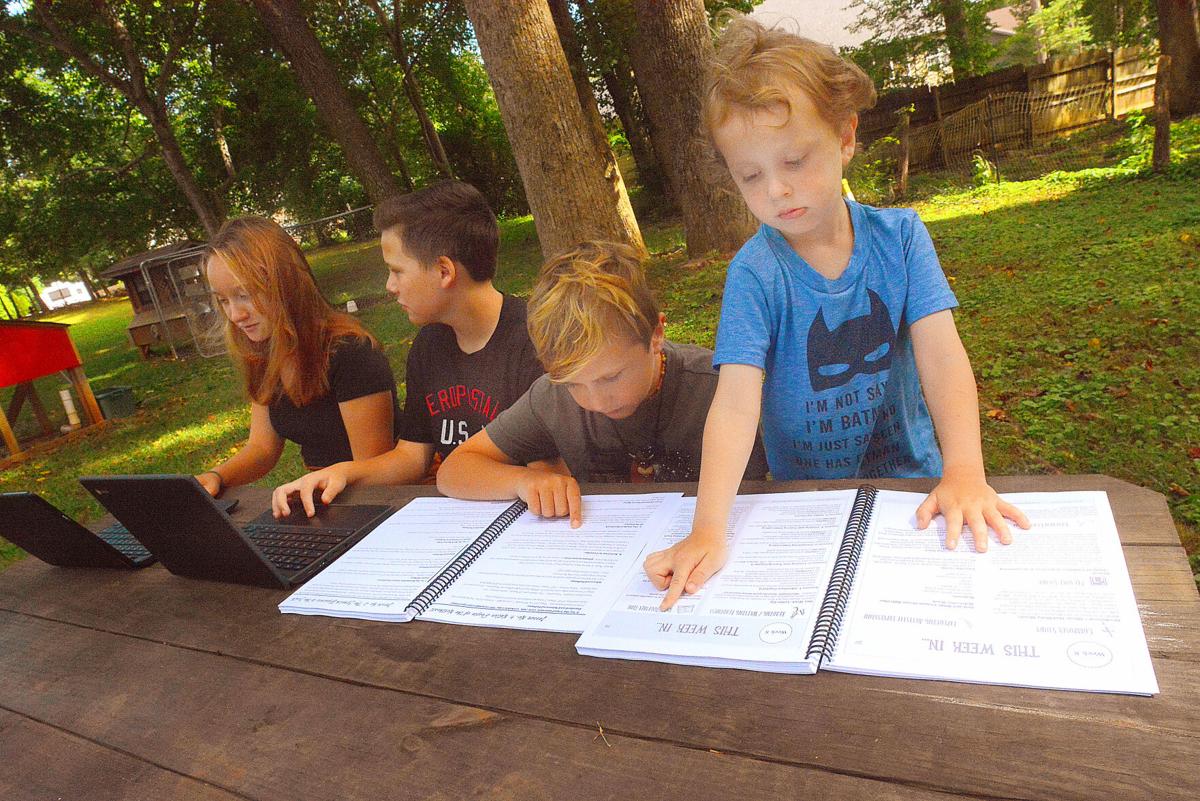 Here, Audrea, 15, Cashton, 13, Liam, 8, and Silas, 4, Truitt look over home schooling materials that they will be using this school year. 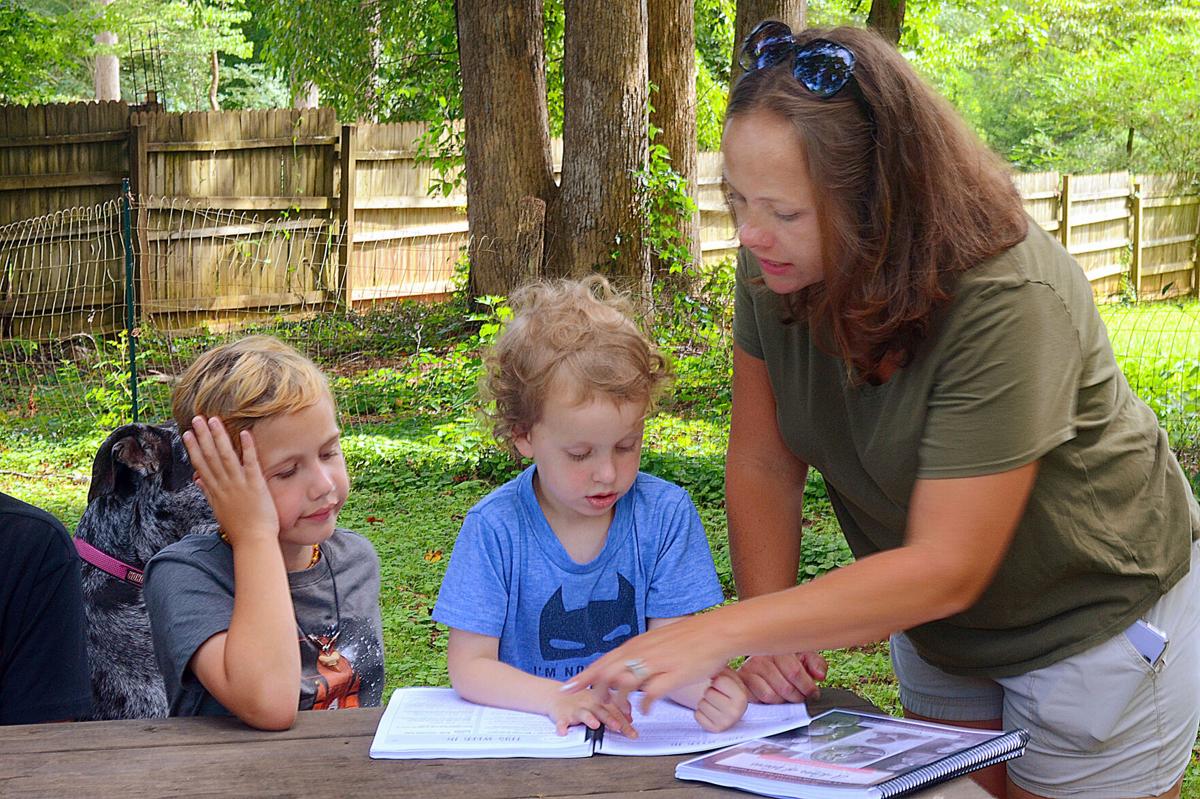 CourtneyTruitt (right) will be teaching during home schooling this year due to the coronavirus outbreak. Here,Courtney shows her sons Liam, 8, and Silas, 4, some of the lesson plans they will be studying this year at home. 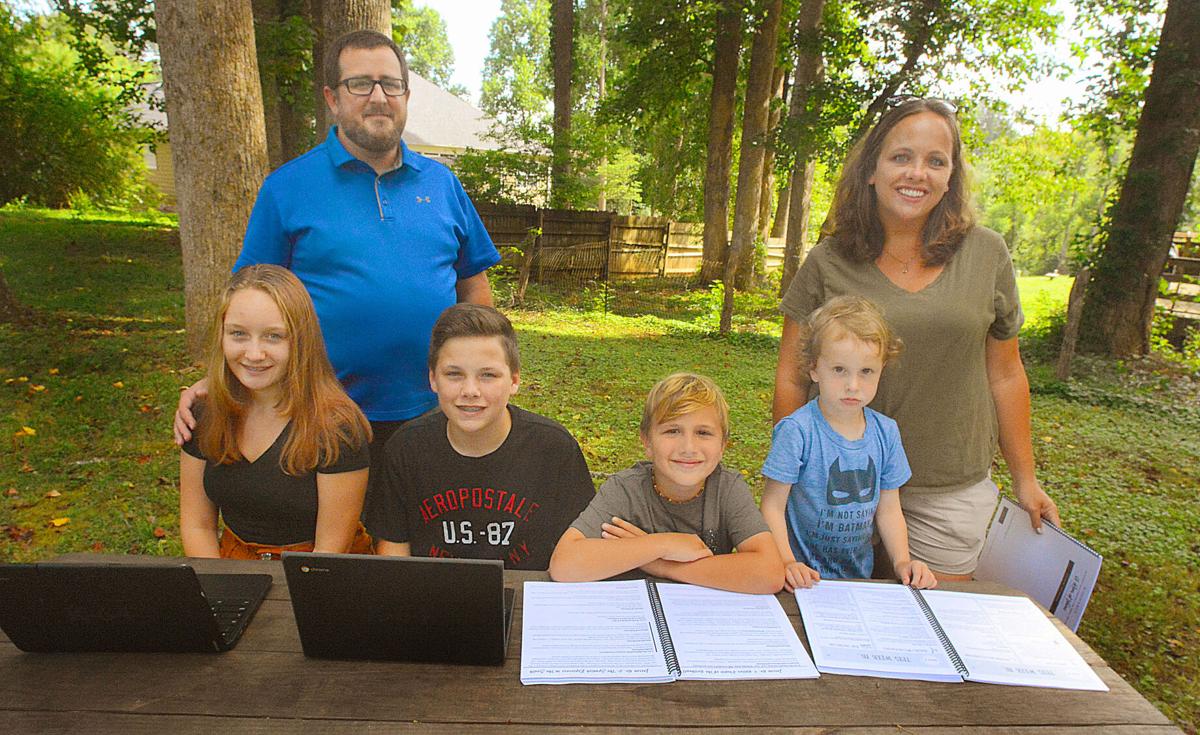 The Truitt family will be doing home schooling this year due to the coronavirus outbreak. Here, Audrea, 15, Cashton, 13, Liam, 8, and Silas, 4, pose with their parents Alex and Courtney Truitt at their home.

By Virginia Annable and Kristen Hart

As the school year approaches with a global pandemic raging, parents are left to choose the future of their child’s education, and some are turning away from the public school system altogether.

Home-school and private school present an alternative to the limited, socially-distanced, learning public schools will offer this fall.

All of North Carolina’s public schools will be limited in how many students can be at school at one time, Gov. Roy Cooper announced mid-July. Face masks will be required, large group gatherings will be canceled, students can’t share materials and lunch will look a lot different.

Locally, all of the schools systems will offer online learning for those who want it. Most students of Catawba County Schools and Newton-Conover City Schools will be in school two days a week and do three days online. Hickory Public Schools students will be remote for the first four weeks of school with more plans to come later.

The decision between in-person, online, home-school and private school lands on every parent’s shoulders — and most already had to decide. Hickory Public Schools’ deadline for stating intent was July 31. Catawba County Schools’ was Aug. 1. Newton-Conover’s is Aug 3.

Courtney Truitt barely slept for weeks on end. It was 4:30 a.m. when she went to bed some nights, her husband just waking up for work as she laid down from a long night of research.

She was grappling with how her children would continue their education for the next year. Once her mind was set on home-school for her youngest two, it was weeks more of work finding materials and curriculum for her pre-K and third-grade sons. Her older kids won’t be leaving the nest either; her 10th-grade daughter and son in eighth grade will be home, learning on Catawba Online through Catawba County Schools.

Many families are considering or turning to home-school this year, and the statewide organization North Carolinians for Home Education is expecting a large spike in home-schools this year, Secretary Jessica Frierson, who lives in Granite Falls, said.

“To say we are getting a ton of interest is putting it mildly,” Frierson said. “I would venture to say that practically every parent in the state has considered home schooling.”

Many are wondering what exactly they have to do to open a home-school, what curriculum they should use and what laws they have to follow, Frierson said. Her best advice — coming from a mother who home-schooled her 10 children — is for these parents to think long term.

They should plan to home-school for an entire year, she said. If they want their children to return to public school — as Frierson expects many will — parents should make sure their children stay on track with the statewide curriculum.

That’s Truitt’s plan for her pre-k son Silas and third-grader Liam. But if Liam enjoys home-school, it could be permanent, she said.

When schools closed in March due to the COVID-19 pandemic, Truitt and her husband Alex toyed with the idea of home schooling or online school but it was in July, when the pandemic worsened in the U.S. and schools geared up for reopening, that home-school became a likely option.

She didn’t want her own children to get infected, or spread the coronavirus to her or her husband — both of whom have a history of asthma. She couldn’t stand the thought of her children without their parents.

Truitt also realized not everyone would have the luxury of choosing to keep their kids home — others have to work, leaving no time for home-school or child care. Keeping her kids home means fewer people in school to spread the virus.

“I have the opportunity as a stay-at-home mom (to home-school),” she said. “I can do my part to keep my kids home. I can keep four more little germ-sharers out of the public and give those kids (in school) a better chance.”

“I think it would be in the long run better suited for their child to have that smooth transition,” Frierson said.

For those only considering home schooling for a few months — not an entire year — Frierson said parents should stick with online school through the public school systems. That way, they are counted in enrollment and schools will have proper funding for when the students return to the classroom.

For long-term home-schoolers, One of the most important aspects to successful home schooling is support, Frierson said. There are local home schooling groups for people to turn to, and many are, Truitt said. She’s joining several herself to find activities and advice, and she’s noticed many other newcomers in the Catawba County region as well.

“From what I’ve seen there are a lot of people locally who've joined some of those home-schooling groups and they're all first timers asking questions like me,” Truitt said. “There’s a lot of brand-new people.”

There’s been a clear increase in home-schooling interest statewide, Frierson said. The period to register a home-school with the N.C. Department of Administration opened July 1, and since then, the website has been overloaded. It used to take less than an hour to hear confirmation of the registration. Now, it’s days, Frierson said.

Last school year, 2019-20, Catawba County had 1,519 registered home-schools and there were 94,863 statewide. Frierson is expecting those numbers to skyrocket this year, then come back down the next.

The drawback of such an increase is the potential of families not following laws guiding home-schools, Frierson said. One such law being that one home-school can only teach two families — no more.

“If people don't (follow the law) there's going to be more regulation in the future and there doesn't need to be,” Frierson said. “With people in their desperation, some are doing things that aren’t legal.”

That’s why Truitt spends hours on end researching home-school education. While it’s new and unfamiliar, she hopes the year of at-home learning will bring her family even closer — just as spending time at home during the pandemic has already done since March.

“As trying as all of this has been, for our family it’s been a beautiful thing,” Truitt said. “We’ve spent more time together and we’ve all grown closer, the children have grown closer.”

Head administrator Chad Leatherman for Training Them Up Christian School says he believes private school would be a great option for families during a time of the pandemic. “We are a small school,” he said.

Leatherman said he expects a small student body this year.

The private school is starting its first year on Aug. 24 and will offer classroom education five days a week, Leatherman said. Students will also have the option to take classes online.

The school will offer grades second through ninth in their first years.

The rate at the school is $250 a month for traditional classroom learning and the online option is $100 a month. For information, visit www.trainingthemup.org or call 828-346-5550.

As COVID-19 gained speed in Catawba County, one of the first steps taken to limit its impact was closing nursing homes to visitors.

Here, Audrea, 15, Cashton, 13, Liam, 8, and Silas, 4, Truitt look over home schooling materials that they will be using this school year.

CourtneyTruitt (right) will be teaching during home schooling this year due to the coronavirus outbreak. Here,Courtney shows her sons Liam, 8, and Silas, 4, some of the lesson plans they will be studying this year at home.

The Truitt family will be doing home schooling this year due to the coronavirus outbreak. Here, Audrea, 15, Cashton, 13, Liam, 8, and Silas, 4, pose with their parents Alex and Courtney Truitt at their home.