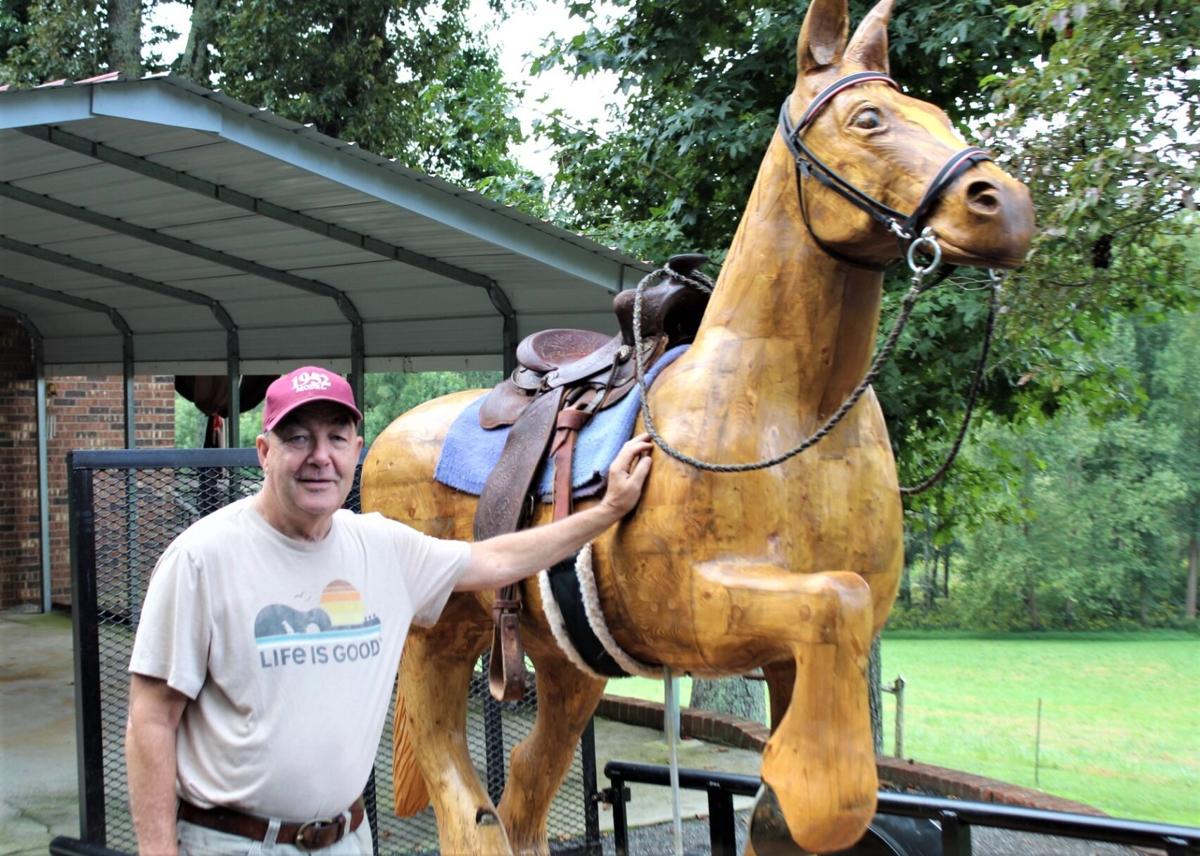 Cecil Ford stands by a life-size horse made from wood. He used a chainsaw to carve it. 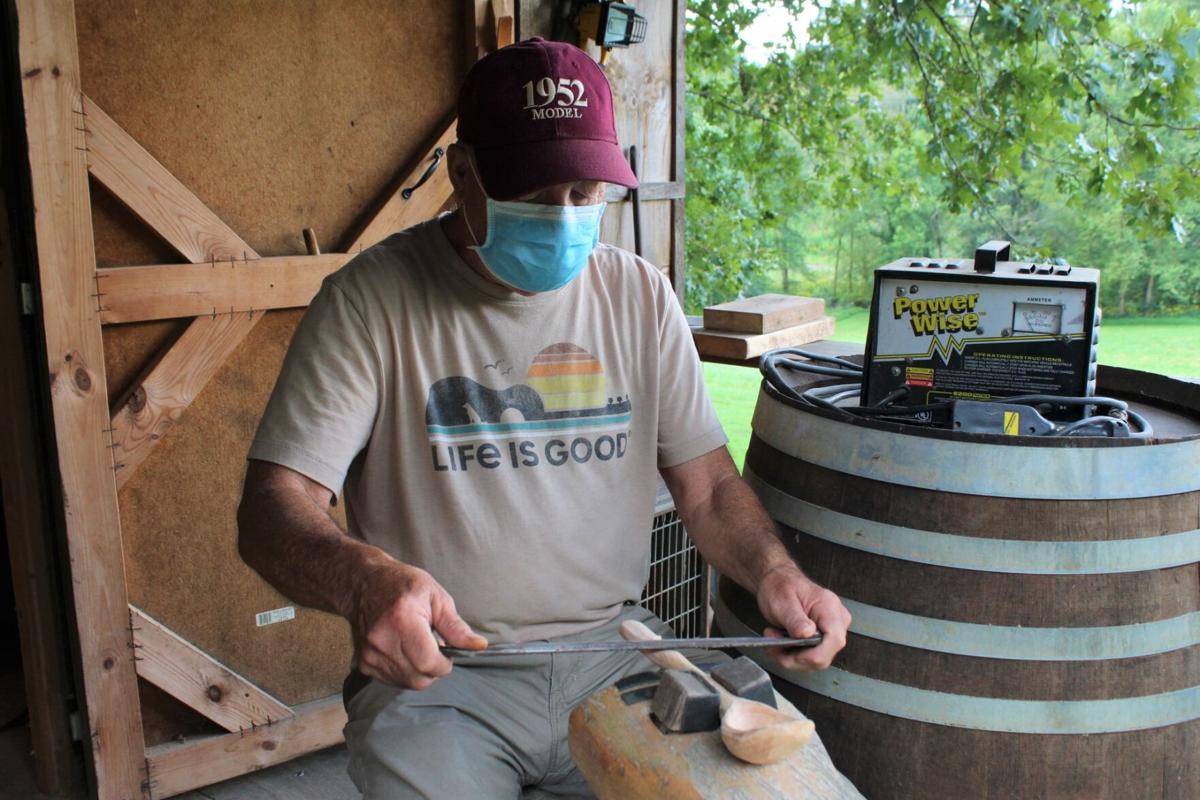 Cecil Ford carves a spoon using a spoon mule tool outside his workshop. 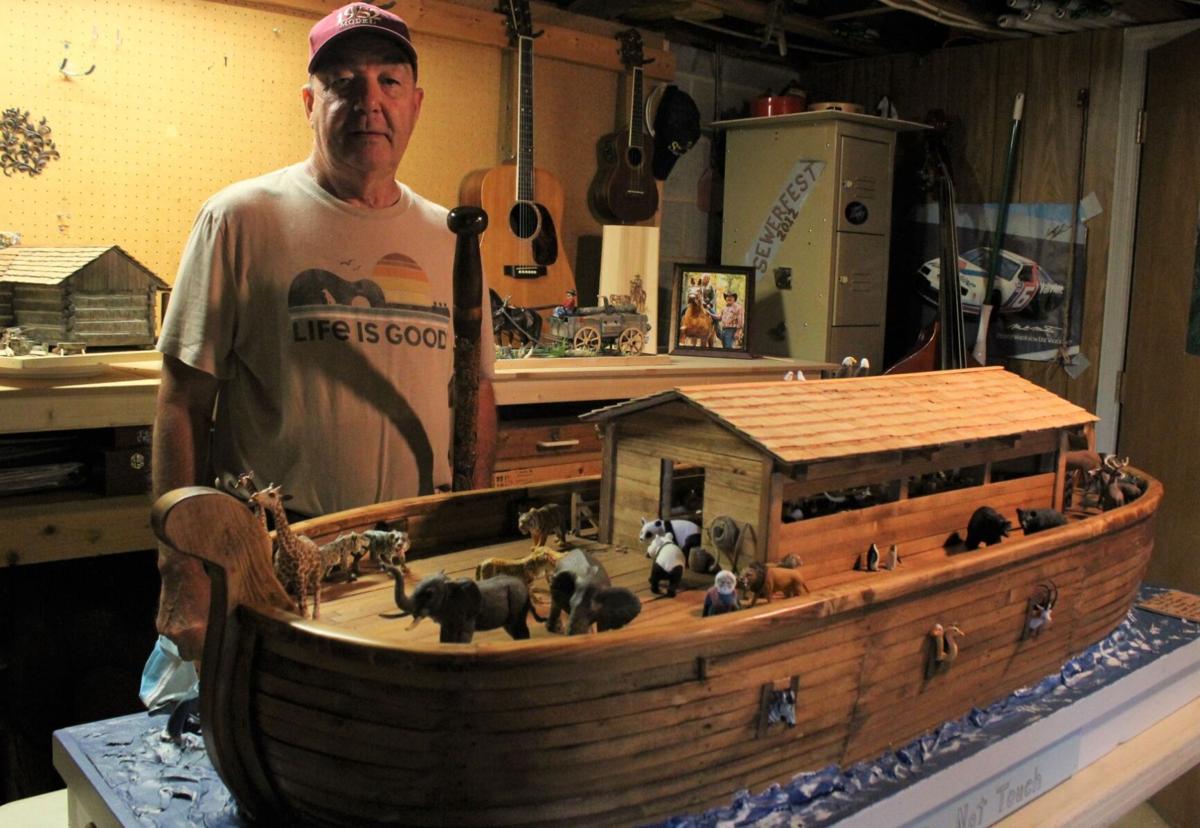 Cecil Ford built a replica of Noah's Ark after having a dream about it.

Cecil Ford can make about anything out of wood.

He's created guitars, a replica of Noah’s ark and a life-sized horse. But he says his greatest achievement is building his own house.

Ford said he was first inspired to create at 6 years old when he watched his uncle draw a horse. “It just fascinated me that someone could make something look like that with pencil and paper,” he said.

“I drew horses and deer,” he said. “I started drawing at a pretty early age. It was all I wanted to do when I was in school.”

Ford said he wanted to try other forms of art and took up painting at 10. “If I couldn’t find a canvas, I would paint on pieces of wood or whatever I could find.”

He said he started carving in his early 20s.

Ford is 68 now. He has his own workshop right behind his home in Newton. He decorated both the inside and outside of the shop with his work.

Although there are many power tools available to help create different pieces, Ford said he appreciates the classic tools, such as the spoon mule, as they are much quieter. “… and it’s just much more fun,” he smiled. “Saws and axes. It takes more time, but it’s just more relaxing to me.”

Ford builds furniture, guitars and eating utensils. He also built a life-size horse that was featured in the Cat Square Parade in Vale last Christmas. “We took the saddle off and hooked up Santa’s sled to it. It was the last float in the parade,” he said.

The horse is sturdy enough that an adult can sit on it.

He said he has sold some of his work in the past, but prefers to give the carvings away as gifts. “I get more enjoyment out of making it and giving them to people than I do selling it,” he said.

Ford said he has felt inspired to challenge himself. Earlier this year, after he had a dream of his next project, Ford started work on a 5-foot-long Noah’s ark replica with hand-painted animals. Some animals are made of clay and then painted.

Ford hoped to take it to multiple churches this year to show children, but, due to the coronavirus pandemic, he had to put that plan on hold. He said he plans to start taking it to churches soon.

Ford said his proudest achievement was building his home with his wife. “I laid all the brick, framed it, we done it all,” he said. He and his wife designed the home to meet their needs and created their own floor plan.

He said the only thing they didn’t do themselves when building the house was wiring and plumbing.

Now that Ford has completed two major projects, the large horse and Noah’s ark, he said his focus is on creating anything that comes to mind when he picks up a piece of wood and a whittling knife.

Cause of house fire at Lake Hickory home under investigation

Cecil Ford stands by a life-size horse made from wood. He used a chainsaw to carve it.

Cecil Ford carves a spoon using a spoon mule tool outside his workshop.

Cecil Ford built a replica of Noah's Ark after having a dream about it.