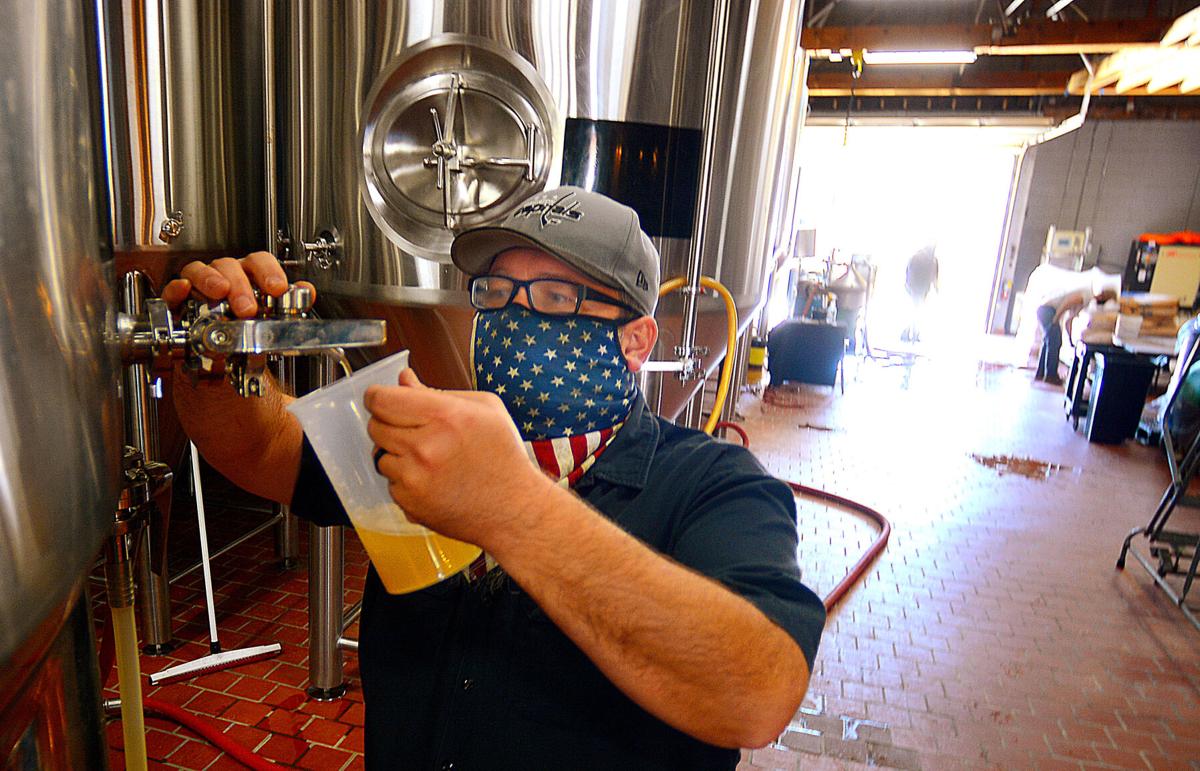 Brewmaster Levi Duncan of Community Brewery Ventures does a quality control check on a beer at the new brewing location in the old Newton Fire Department. 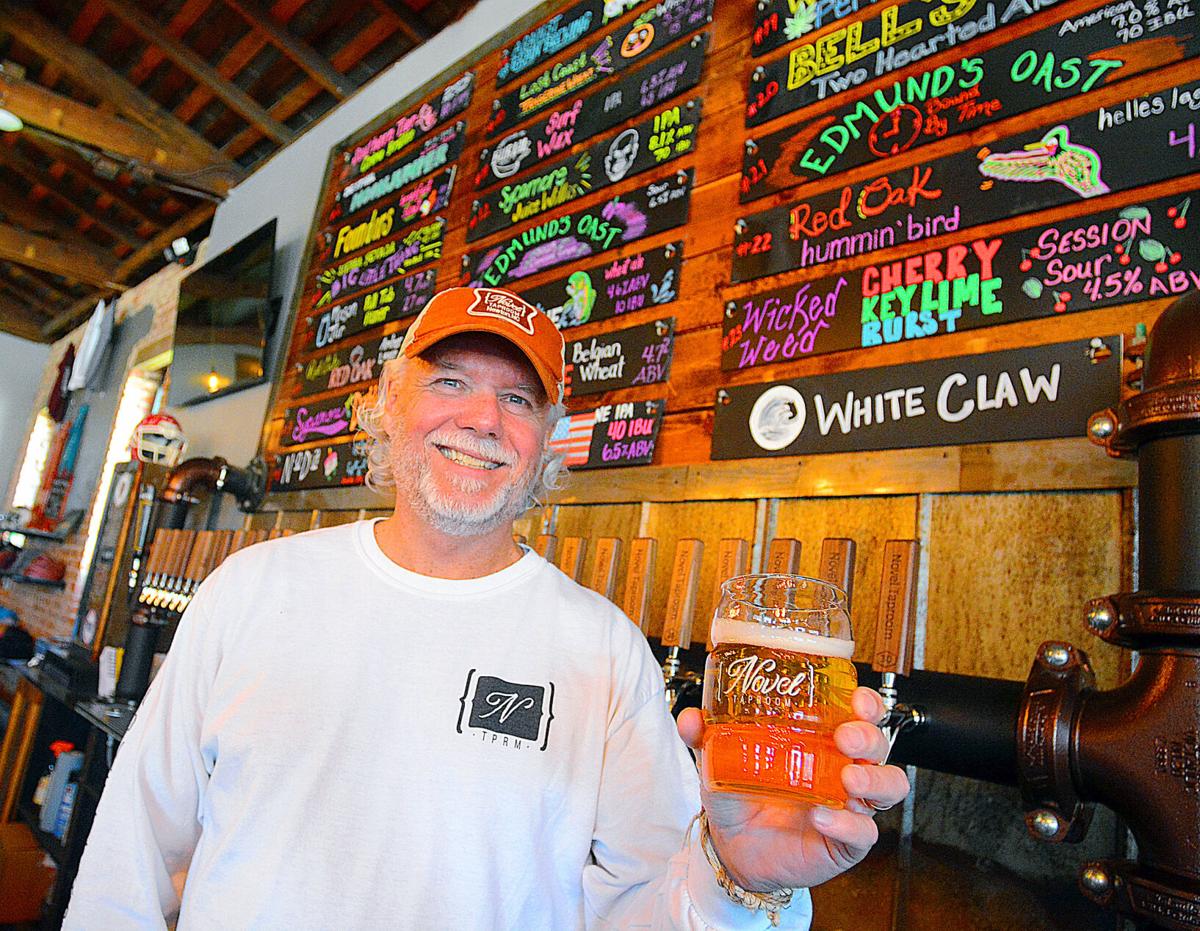 Jeff Allen, owner Novel Taproom in Newton, displays one of the numerous beers that he serves at his establishment. 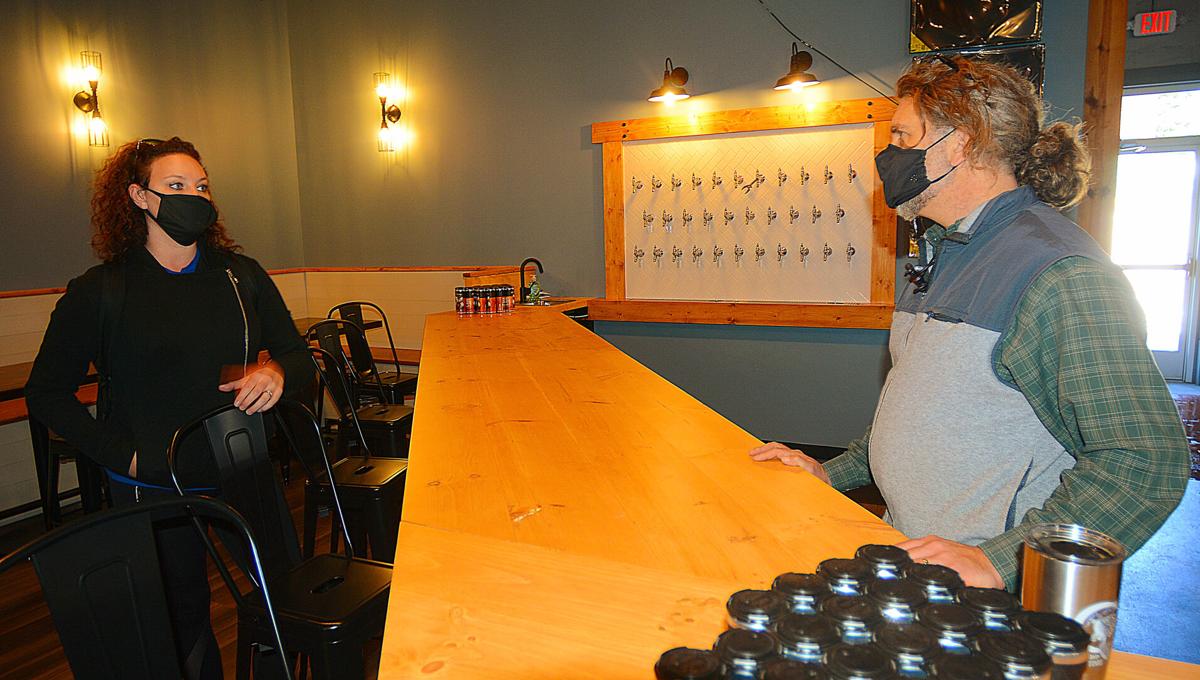 Megan Miller, director of marketing and Reed Thomas, director of supply chain management for Community Brewery Ventures, confer about the 30 different beers which will be on tap at the establishment in downtown Newton. 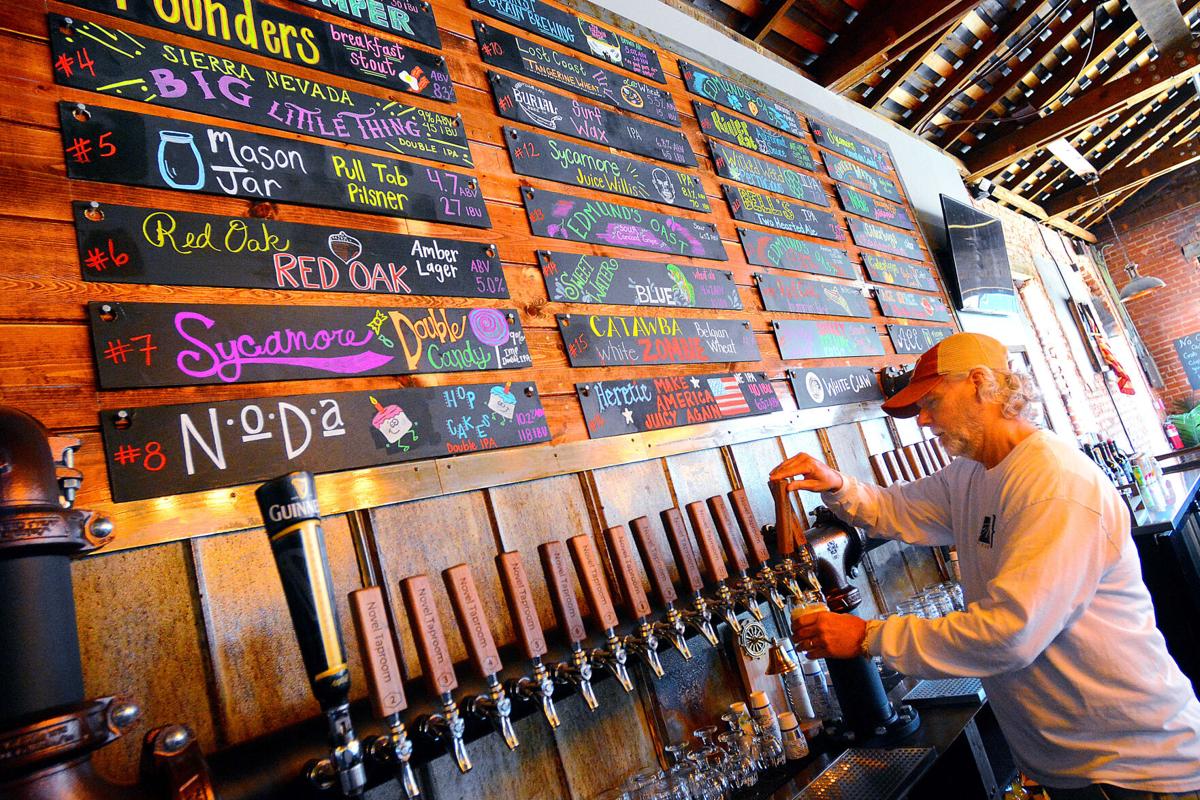 Jeff Allen, owner Novel Taproom in Newton, pours a beer for a customer.

The station got a facelift over the past year. The front of the building is painted blue and gray and a sleek bar was added in the back. A sign on the building represents its new habitants — Community Brewing Ventures, a beer brewing collaborative started by the founder of D9 Brewing.

CBV, though led by D9 founder Andrew Durstewitz, won’t just brew D9 beers, Director of Marketing Megan Miller said. The goal of the brewing collaborative is to help small breweries around the country grow their audience and spread their reach. Currently, seven breweries, including D9, are on board. CBV hopes to add many more partners, Miller said.

“This is a way for smaller breweries to sell their beer at a higher scale than they can now,” she said.

At the Newton site, CBV brewers will work with each brewery to brew larger batches of their popular beers, can the beer and sell it out of the taps in the tasting room, CBV Brewmaster Levi Duncan said.

The venture will be a learning experience for the smaller breweries and for longtime brewer Duncan, he said.

‘I’m excited about the opportunity,” he said.

Newton was chosen for the brewing venture because of the town’s potential and investment in its downtown, Miller said. Now, CBV gets to be a part of the town’s culture of growth, CBV Director of Supply Chain Management Reed Thomas said.

“To get to be a part of that revival is awesome,” he said.

The former fire station presented the perfect location. It has character and was built to be easily cleaned.

The process of moving and opening has been slow, but the brewery expects to get its permit to brew soon, Duncan said. After that, the final touches will be made on the tasting room — where people can drink beer and watch the brewing process, Miller said.

The taproom will likely open to the public in early summer, she said.

Next door to CBV, Novel Taproom also set down roots in a rejuvenated old building. Owner Jeff Allen helped woo CBV to Newton. He said he sees the potential of working closely with the brewing venture.

“What we’ve created, and refer to it as, is a defined entertainment district, and these are the anchor establishments,” Allen said.

Though CBV’s taproom will not open until early summer, the two businesses are already working together to hold events, share beer and, most certainly, share customers. The relationship will only be good for Newton, Allen said.

“We have something special,” Allen said.

Visitors can hop from one brewery to another easily, making an afternoon out of a visit to Newton, Allen said.

“We’ve made it into a destination,” he said.

Allen is still growing his business as CBV comes to life next door. At the back of Novel Taproom, which is in a renovated late 1800s-era building, Allen is adding a deck and patio with another bar outside, he said.

Both businesses are preparing for a boom in business this summer, as CBV opens and COVID-19 restrictions ease, Allen said.

“I think there will be an explosion of energy,” Allen said. “There’s a lot of pent-up energy here.”

The energy also comes from new developments in downtown Newton, CBV General Manager Kathleen Cleveland said. Cleveland grew up in the area and is a graduate of Newton-Conover High School. She moved back to the area for her job with CBV, and she sees a bright future for Newton.

The two businesses are, in part, the fruit of Newton’s investment in its downtown. The city has improved utilities in recent years and beautified the streets of the downtown area, Newton Public Information Officer Alex Frick said.

“We are excited to see the investments we’ve made in the downtown infrastructure yielding significant private investment,” Frick said. “As we continue to invest in the community, we hope the private sector continues to view Newton as an ideal location.”

Together, CBV and Novel hope to be catalysts for more investment and help grow Newton’s visibility and attractions.

Downtown Newton is seeing other growth with new businesses and investment in residential spaces in downtown, Frick said. Those investments show a growing interest in the city.

“The changes in downtown Newton over the past five years have been significant and with these new businesses coming into downtown, we’re excited,” Frick said.

Drought-stricken California trucks its salmon to the sea

Drought-stricken California trucks its salmon to the sea

Brewmaster Levi Duncan of Community Brewery Ventures does a quality control check on a beer at the new brewing location in the old Newton Fire Department.

Jeff Allen, owner Novel Taproom in Newton, displays one of the numerous beers that he serves at his establishment.

Megan Miller, director of marketing and Reed Thomas, director of supply chain management for Community Brewery Ventures, confer about the 30 different beers which will be on tap at the establishment in downtown Newton.

Jeff Allen, owner Novel Taproom in Newton, pours a beer for a customer.