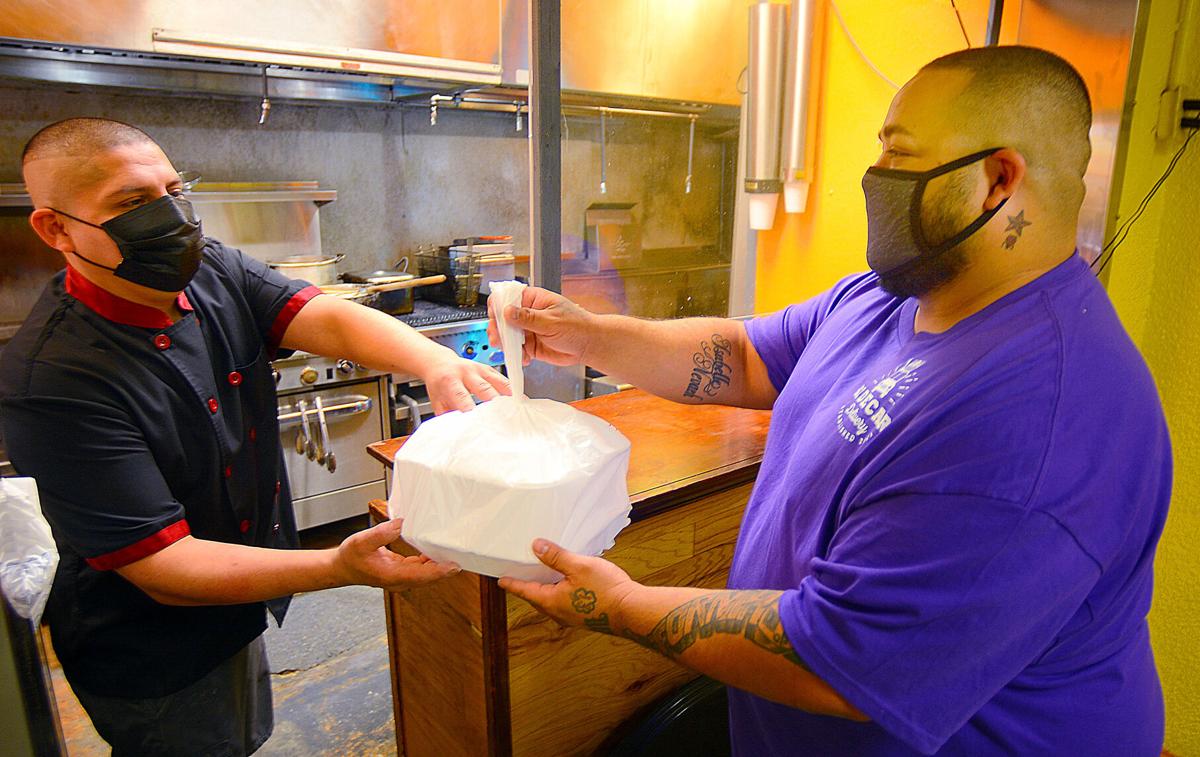 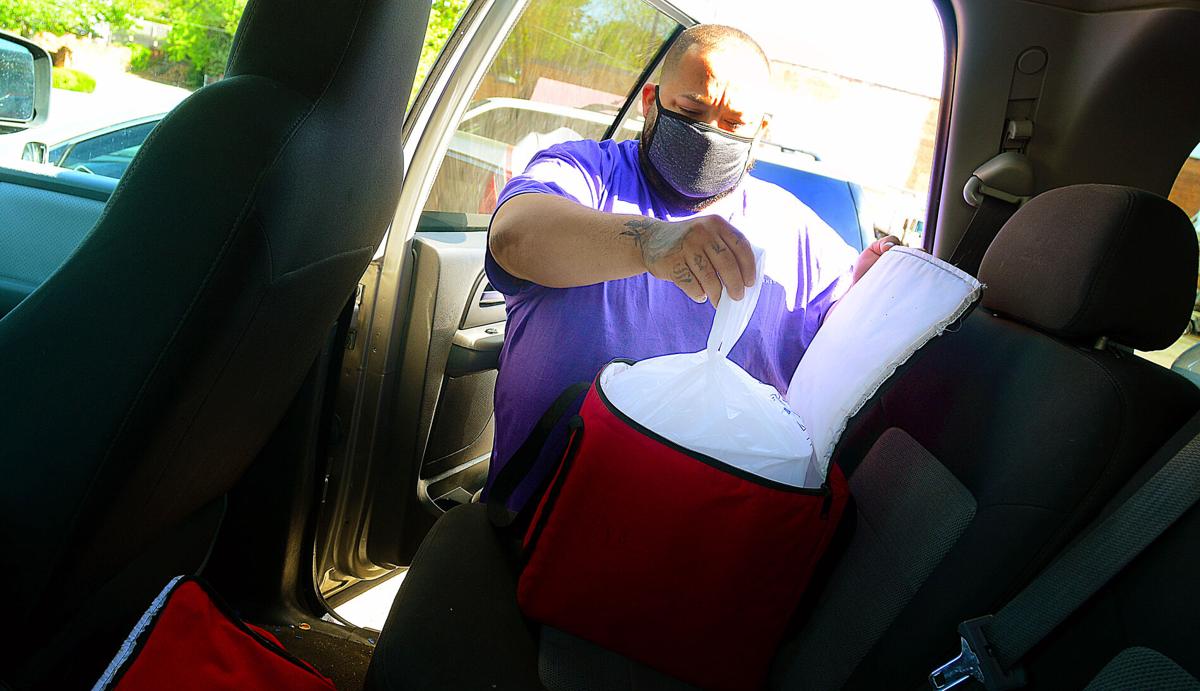 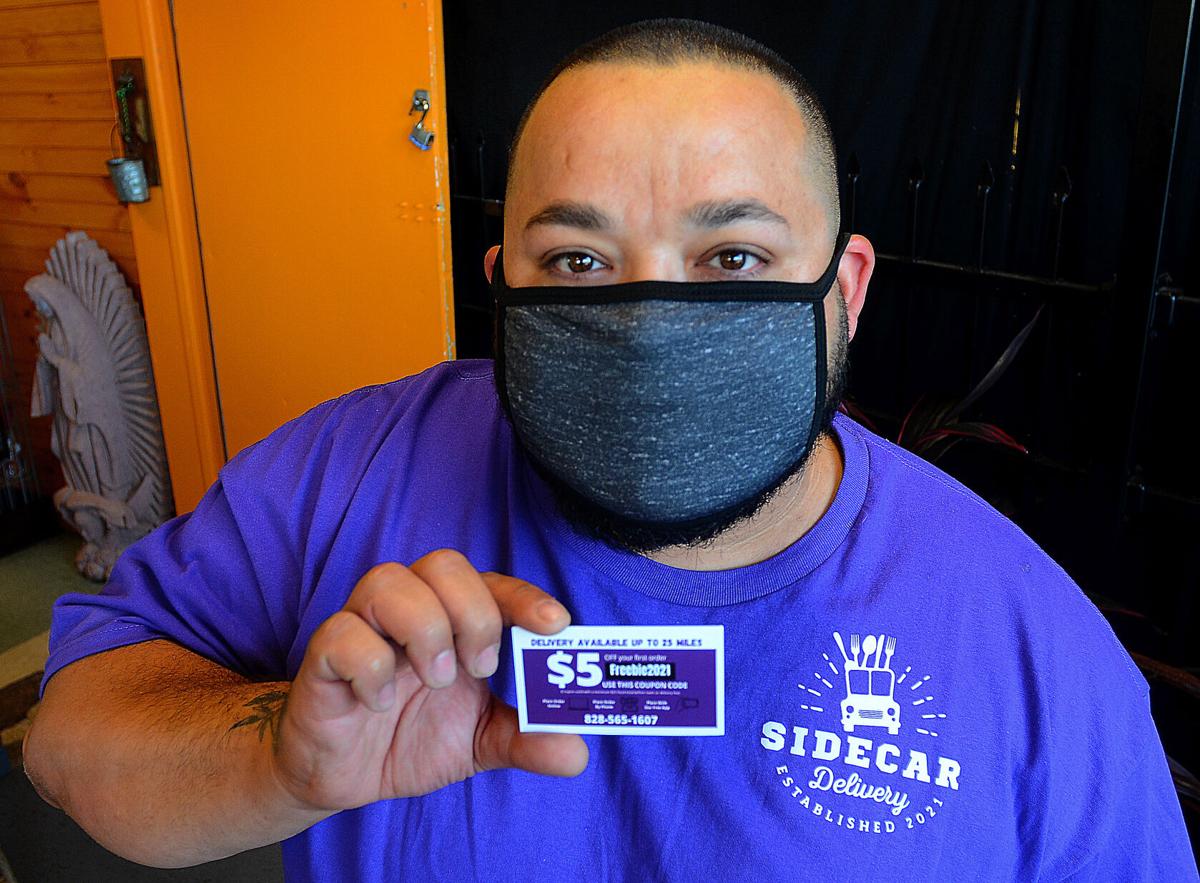 Jesse Valdez, owner of Sidecar Delivery, displays one of his business cards.

Jesse Valdez, left, owner of Sidecar Delivery, discusses how he, Angie Gentile and Lilly Valdez came up with the delivery concept.

Valdez’s latest venture is Sidecar Delivery, a food delivery service — something he’s noticed an increased demand for that he doesn’t think will leave.

“I believe there’s a need because we’re still in a pandemic,” he said. “And there will continue to be a need. There’s also a need for personability.”

Valdez wants to bring a personal touch to delivery service. He wants his customers to know their orders are being double-checked; their food is being made as close to pickup as possible; and, when they call with questions, they’re reaching the owners — Gentile, Valdez and his wife, Lilly Valdez.

Jesse and Lilly Valdez have plenty of experience with food delivery services. While working late-night jobs in Lenoir years ago, the pair craved Chinese food after long nights but didn’t want to drive to pick it up. Jesse Valdez decided to fill that gap in Lenoir.

Over time, that business took off, but the couple eventually decided to move to Texas. They sold the delivery service in Lenoir and started another in Texas. Several years later, after that one grew, it was time to come home, Valdez said.

In Hickory, Valdez worked for another delivery service and saw the high demand in the area, especially at the height of the COVID-19 pandemic. He decided to break off and work for himself.

“I talked to my wife and my sister, and they got on board,” he said.

Lilly Valdez and Gentile say Jesse Valdez’s determination and passion for the business — and food — gave them confidence it would work.

Valdez has made connections with 15 restaurants that are partners with the service. He built those relationships by showing he supports local, too — he eats at local restaurants regularly and draws attention to them on social media. He hopes restaurant owners and community members alike see his passion.

“I go in and I support those businesses and I talk to their owners,” he said. “We visit several times and show we’re here, we support you, and hope they’ll support us. I’m a foodie; I get people connected with food and their community.”

Sidecar Delivery is growing the number of restaurants people can order from. Eventually, Valdez hopes to expand eastward — to Conover, Newton and Statesville, he said.

More information and online ordering is available at www.sidecardelivery.com.

Israel: Who is Naftali Bennett?

Israel: Who is Naftali Bennett?

Jesse Valdez, left, owner of Sidecar Delivery discusses how his staff Angie Gentile and Lilly Valdez came up with the delivery concept.

Jesse Valdez, owner of Sidecar Delivery, displays one of his business cards.

Jesse Valdez, left, owner of Sidecar Delivery, discusses how he, Angie Gentile and Lilly Valdez came up with the delivery concept.