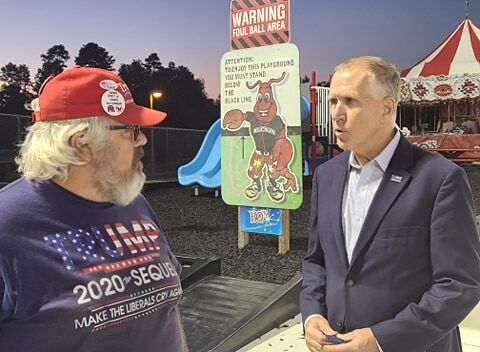 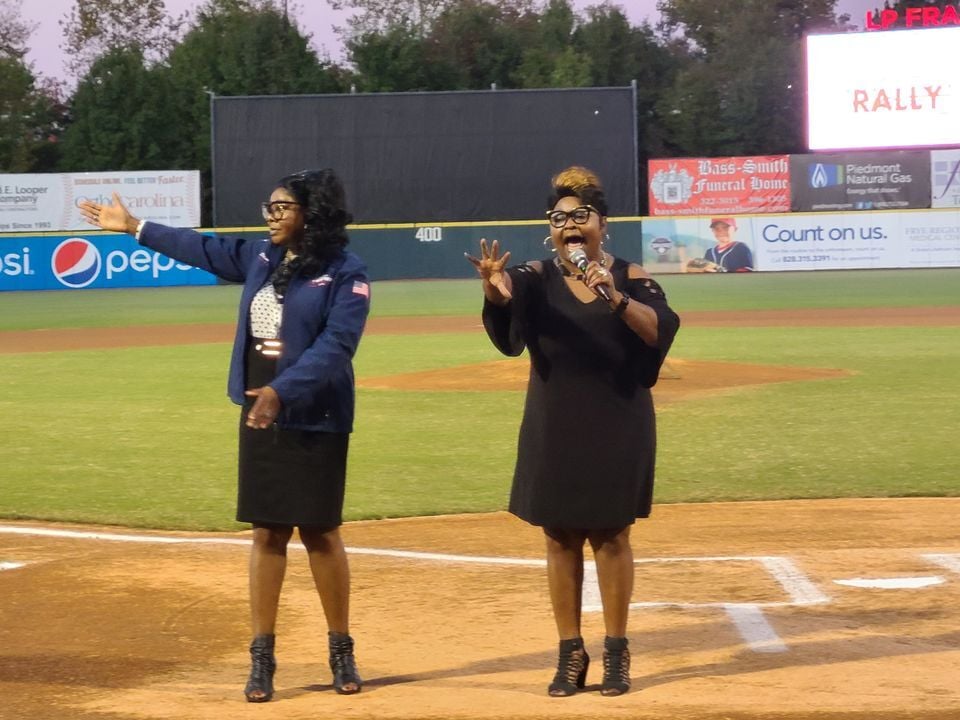 Sen. Thom Tillis and conservative activists Diamond and Silk were among the speakers at a rally for Republican candidates at L.P. Frans Stadium in Hickory Friday night.

Diamond & Silk, who are from North Carolina, pumped up the crowd with chants of “Four more years!” before Tillis came out to give his remarks.

Tillis criticized his Democratic opponent Cal Cunningham for his extramarital affair and highlighted the important role North Carolina will play in determining the balance of power in the U.S. Senate.

“(The Democrats) will destroy this country, ladies and gentlemen,” Tillis said. “(Cunningham) will be a rubberstamp for Chuck Schumer.” He said a Democratic majority would use its power to make Washington D.C. a state and add seats to the U.S. Supreme Court.

Tillis, a member of the Senate Judiciary Committee, also spoke of his plans to vote for the confirmation of Supreme Court nominee Amy Coney Barrett.

Speaking to media after the event, Tillis also addressed his views on issues like additional COVID-19-related stimulus.

He said he supports extension of the Paycheck Protection Program and unemployment benefits, as well as stimulus checks to people in need.

“You know, there are some people who haven’t been affected by COVID in terms of their job or their income,” Tillis said. “I’d rather have the resources go to the families that are struggling the most.”

President Donald Trump did not appear on the baseball field Friday night but he was very much on the minds of the people who showed up to the rally.

Some said they credited Trump with helping them economically.

Maiden resident Ronnie Reep, 58, said he works for Ethan Allen and things have been better at his job than they have been in a long time, a situation Reep attributes to Trump’s leadership.

Michael Curtis, 67, of Lenoir, said he does not always like the things Trump says but believes he is a man of his word.

“I don’t trust politicians and I trust him,” Curtis said. “I think he honestly cares about the country, the job, the people and that’s what matters to me.”

Kenneth Bennett, 57, of Statesville, said he has received some pushback for being a Black man who supports Trump.

"They talk about how he always run his mouth and boasting and talking, how he lies all the time and runs his mouth all the time,” Bennett said. “I tell everybody, if my wife looked like that and I was a billionaire and I was leading a free country, I'd be the same way, you know?"

A better life for future generations. American democracy. The very survival of America.

Amanda Duncan, the director of the Catawba County Board of Elections, opened the door on early voting Thursday morning.

Catawba County plans to test charging non-residents a fee to park at its parks.